Plans for the large-scale Suzhou Center integrated development in the heart of the western CBD of Suzhou Industrial Park have just been unveiled, and it includes a major retail component designed by Benoy, which boasts the world’s largest free-form monocoque roof structure spanning 36,000 metre square. “Benoy’s design for the roof was inspired by the mythical Chinese Phoenix,” explains Winnie Tsang, Director at Benoy. “We envisaged the structure as a bird resting above an oasis with the striking curved architecture mimicking its wings.” The seven-storey retail and entertainment podium will have a GFA of 340,000 metre square and will be spread across three interconnected buildings. Alongside luxury and high-street retailers, children’s attractions and designer studios, it will also hold an IMAX Cineplex and an Olympic-size ice rink. Another prominent feature in Benoy’s design are the landscaped bridges, which extend from the retail development to Jinji Lake, located nearby. From the retail podium, terraces overlooking the water will also create additional civic spaces, while a cascading ‘water curtain’ spanning 50 metres pays homage to its surroundings. 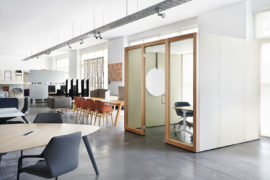 With their new Verse Collection, Zenith Design Studio is translating the home’s privacy into workspaces that have been designed for collaboration, creating offices that are worth the commute.