HASSELL Creates a Second Home for The Working Capitol

HASSELL has transplanted the identity and soul of co-working brand The Working Capitol to a very different location in Robinson Road. Here’s a preview of our Cubes 86 feature!

A great sequel is hard to make – ask any creator. And it is especially challenging after a stellar debut. Such is the case with The Working Capitol, which entered Singapore’s co-working scene in 2015. Back then, co-working wasn’t typically regarded as a progressive lifestyle choice so much as it was a necessity for start ups to offset Singapore’s premium rental prices. The Working Capitol took over five shophouses along Keong Saik Road and – in collaboration with Takenouchi Webb, FARM and Foreign Policy Design – turned them into an exciting co-working space that has fostered a vibrant and equally exciting community.

Designed by HASSELL, the second branch at 140 Robinson Road occupies 11 of the 19 floors at Crown @ Robinson – a new commercial building designed by ONG&ONG. The new premises occupy 5,100 square metres – more than double the size of The Working Capitol on Keong Saik – with a generous five-metre height between floor plates. “We had so much space to play around with and also so many constraints, both the typical and the unexpected,” says Joel Sampson, the Project Lead at HASSELL.

To start with, unlike typical commercial buildings, Crown @ Robinson has no central cooling system; it is up to individual tenants to kit out their spaces. Every unit has an outdoor air-con ledge that cuts into the floor plate, and in some areas natural light is limited by the building’s party walls. In this very different context, the main question that HASSELL needed to answer, says Sampson, was how to bring over the soul of The Working Capitol from Keong Saik to the new space.

Read the full story in Cubes 86, out now! 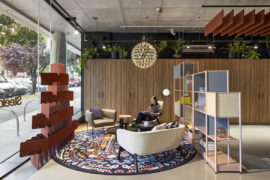 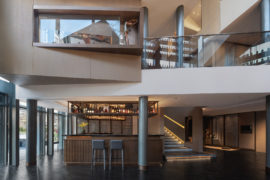