The design for this new mixed-use development responds to the tropical climate, ocean-side location and surrounding architecture, as well as to changing retail behaviour in China.

New on the horizon in Sanya, on China’s Hainan Island, is Sunshine Insurance Finance Plaza, and what sets it apart is its responsiveness to the local climate, the surrounding environment and the people living and working here. Designed by Woods Bagot, the mixed-use development combines A-grade offices with a hotel, a private clubhouse and a rooftop pool, all sitting atop tiered retail podiums and landscaped gardens, which the public can access.

This 37-storey tower and its podiums are the sister site to another tower for Sunshine Insurance Group in Beijing, which acts as the company’s corporate headquarters. “In both briefs, there was an expectation of consistent quality in each development and a timeless modern look. The two buildings should have a similar rigour, but this was modified in the case of Sunshine Sanya on the basis of climatic responsibility,” says Patrick Daly, Principal and Director for Woods Bagot, North America, who leads a team that specialises in mixed-use developments.

For Sunshine Insurance Finance Plaza in Sanya, Daly and his team had to consider the building’s proximity to the ocean in the south of Hainan, as well as the low-lying buildings that surrounded it. “[We delivered] a clean strong solution, which made a primary building shape gesture reacting positively to functional efficiency as well as climatic sustainability,” says Daly. “The climatic strategy followed into the low-scale, on-site buildings intended to behave as a series of garden pavilions accessed in an open-air mall. This open-air aspect to the low-scale buildings took maximum advantage of the Sanya climate.” 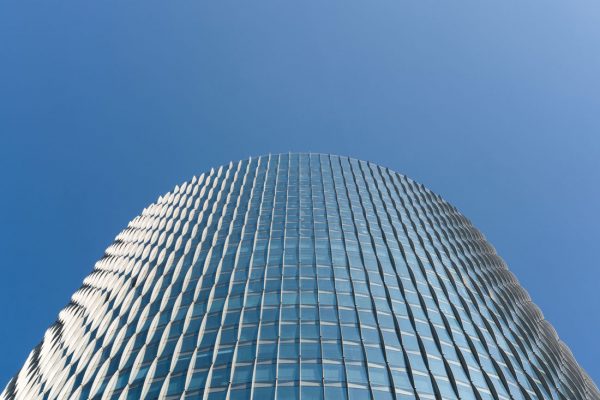 Here, the sun is particularly strong when it’s in the west, and this resulted in Woods Bagot creating a curved tower, which disperses the sun’s rays, as well as distributing and alleviating heat. Along with the building’s shape, native flora at the building’s entrances will act as a buffer for winds coming off the ocean.

“When the plants have matured, this will create a significantly cooler arrival environment than typical urban solutions; enhancing shade with both plant life and low-level building proximity shading will also encourage cross breezes,” says Daly.

Also in response to the climate are the blades that sit horizontally on the low-level structures and the crescent-shaped blades that clad the tower itself. “The horizontal and vertical blades collectively reduce the direct heat gain on the buildings by up to 25 per cent,” says Daly. These blades also reference Hainan’s basket weaving tradition. 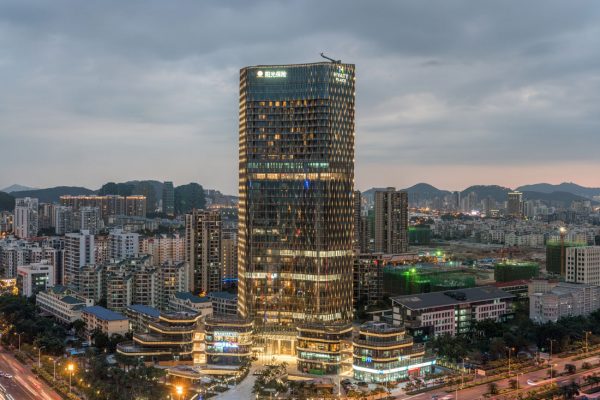 In addition to drawing on basket weaving for their design cues, Woods Bagot found inspiration in a string of pearls. This influenced the design for the pavilions that dot the building’s landscaped gardens. “The pavilions empathise with the low-scale condition of the surrounding neighbourhood developments. These garden ‘pearls’ then establish a scale of modern structures that stack up at the base of the tall tower in order to mediate the neighbourhood scale with the tower scale,” says Daly.

With the combination of podiums and pavilions, convex and concave surfaces, Sunshine Insurance Finance Plaza offers a variety of perspectives, and this is what Daly likes best about it. “The buildings have multiple different readings from multiple vantage points, creating a variety of interest depending on the angle of approach. The mix of uses necessitates a variety of arrival sequences, which create a richness to the overall development.” 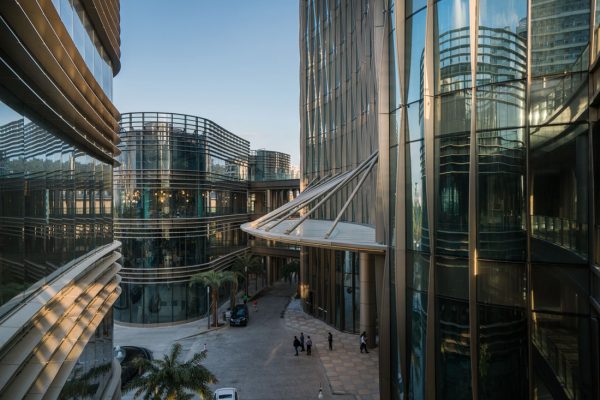 The biggest challenge, however, lay in “finding the right retail mix to create the community quality to the development. Another aspect of this is the expectation of activating the stepped outdoor terraces at the roofs of the pavilions with breakout F&B and flexible work space,” says Daly.

Having worked on many mixed-use projects before, Daly is no stranger to this issue, and he’s also well aware of the changes happening in Chinese retail. It’s something Wood Bagot factored into their design for Sunshine Insurance Finance Plaza in Sanya. “Essentially, [we’re seeing] the end of the big retail malls in favour of a return to a community of uses that mix effortlessly from one use to another,” he says. “[We’re seeing] a return to the interactive environments of living and working in a seamless, pedestrian-first atmosphere.”