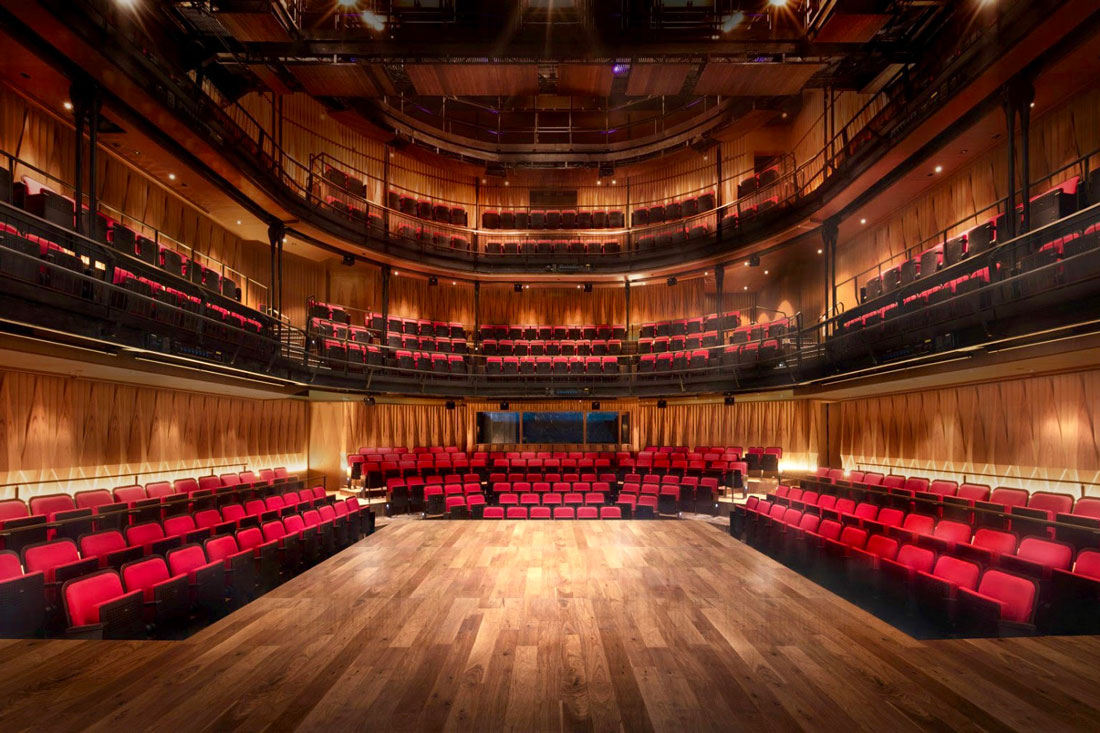 At Wild Rice @ Funan, the stage extends into the auditorium; the audience is seated around the stage’s three sides and the rows of balcony seats are lined with teak rails on which the audience can lean on while watching the performance. The stage measures ten metres deep and six metres wide while the ceiling height is 16 metres; no seated audience will be more than 12 metres away from the performers on stage. The entire space is free of columns and concrete. It is at once grand and intimate. 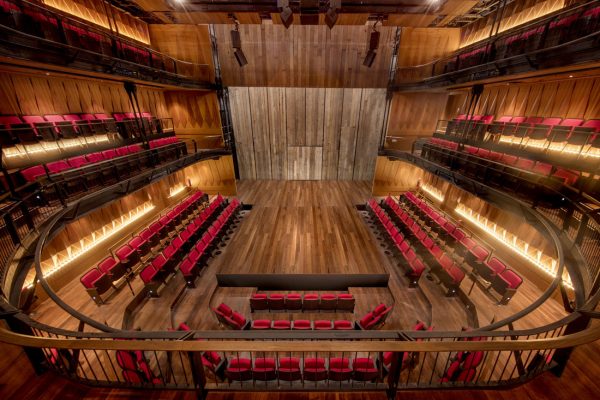 For Wild Rice, eighth time is the charm. The space in Funan is the company’s eighth try to find a permanent home – a quest started in 1998, shares Founding Artistic Director Ivan Heng. CapitaLand offered the company a 100-seat space in Funan’s level B2 three years ago. But Singapore’s theatre scene needed something more.

“We’ve lost our National Theatre,” shares Heng, also noting that Singapore has not had a venue whose sole function is for theatre performance. “They’re always multi-purpose and double as venues for other functions. It’s time to think of legacy,” he added. So the Wild Rice team crafted an “outrageous and irresistible” counter-proposal for a venue that could seat at least 350, which Capitaland approved.

“There were two main considerations in designing this theatre,” shares Chan, one of Wild Rice’s longtime collaborators who also sits on the company board of directors. “Firstly, how to create the most immersive theatre experience for the audience. And secondly, to enable theatre performers to achieve the fullest expression of their craft both on and off stage,” he adds. 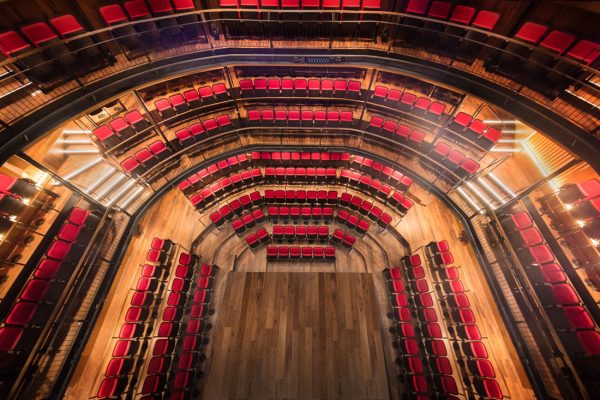 The stage is modelled after the Royal Shakespeare Company’s Swan Theatre in Stratford-Upon-Avon and drew inspiration from traditional stages closer to home like the Chinese opera teahouses, Japanese Noh performance and Malay Mak Yong, all of which place the audience around the stage.

The thrust stage configuration enables members of the audience to see performers, as well as each other. “This configuration encourages and builds community,” says Heng. He personally experienced the communal aspect of thrust theatre when he witnessed a gentleman passing down a handkerchief for a crying lady on the other side of the stage in a theatre in London.

There are nine ways to reach the stage – including a trap door via a crawlspace beneath the stage – which create plenty of opportunities to engage the audience and perform more creatively. 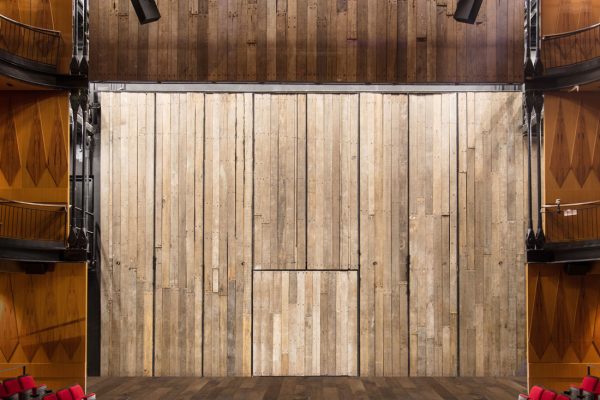 There is no concrete and column in the main theatre and reception. Timber and steel dominated the material palette. Solid wood planks and beams on the stage’s back wall and the ceiling of the reception area were donated by a construction company who used to build wooden stages for traditional Chinese opera, which in recent decades favour metal structure over wood ones. 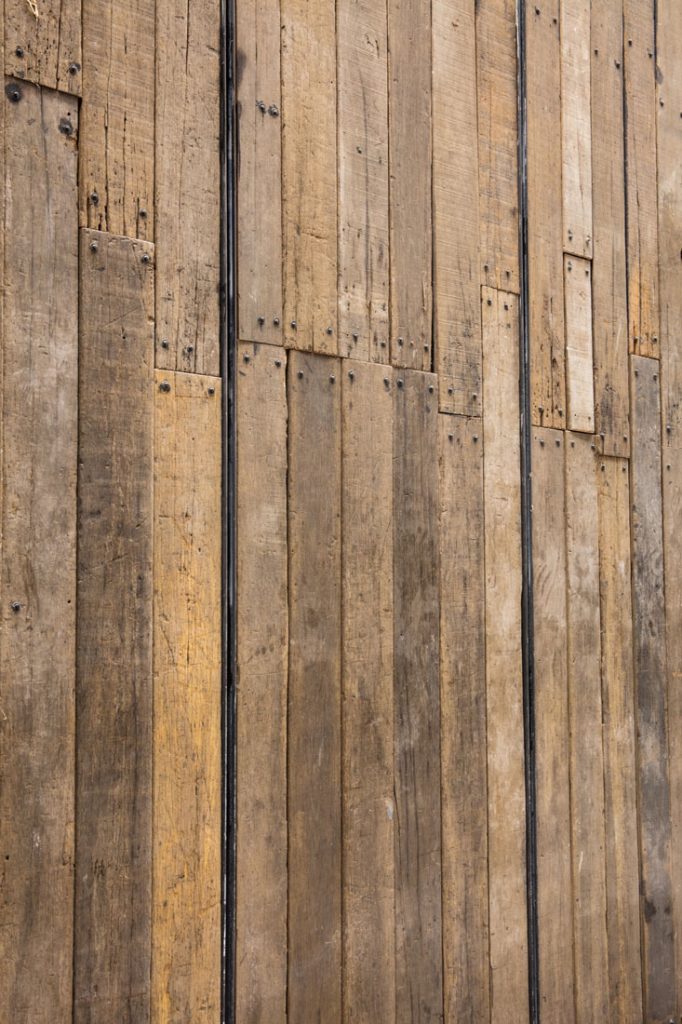 The theatre’s diamond-patterned walls are a tribute to Singapore’s National Theatre on River Valley Road, which was demolished in 1986. Designed by local architect Alfred Wong and completed in 1963, the theatre featured a faceted facade that represents the five stars of the Singapore flag. 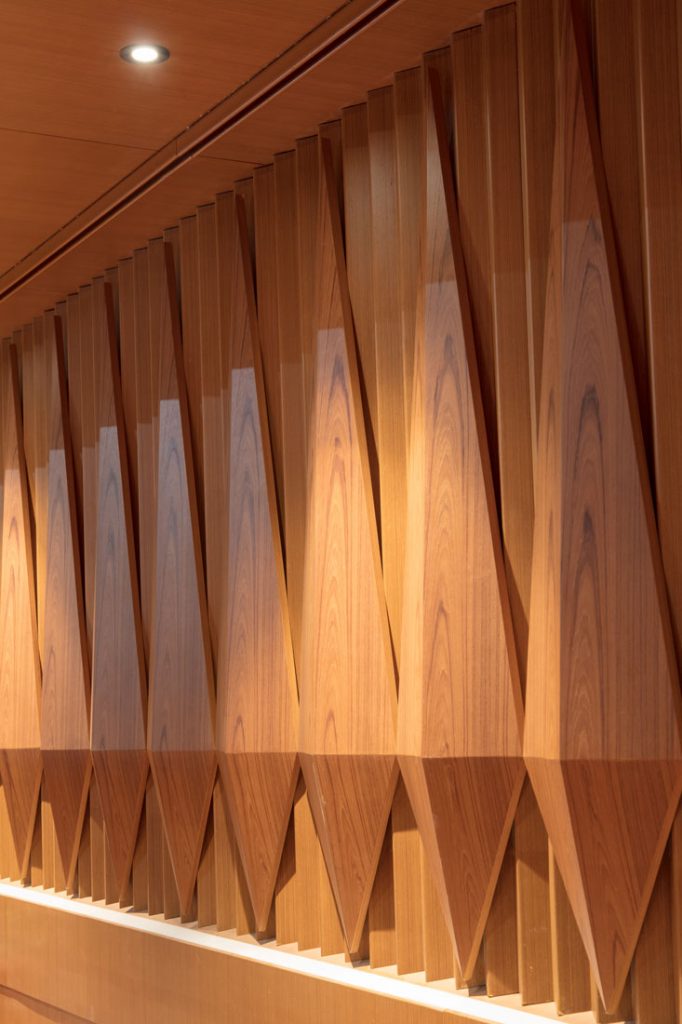 The theatre seats were custom-designed with lumbar support, each row of seats is installed at a different angle (14, 12, 1o degrees, respectively) to optimise the viewing experience. 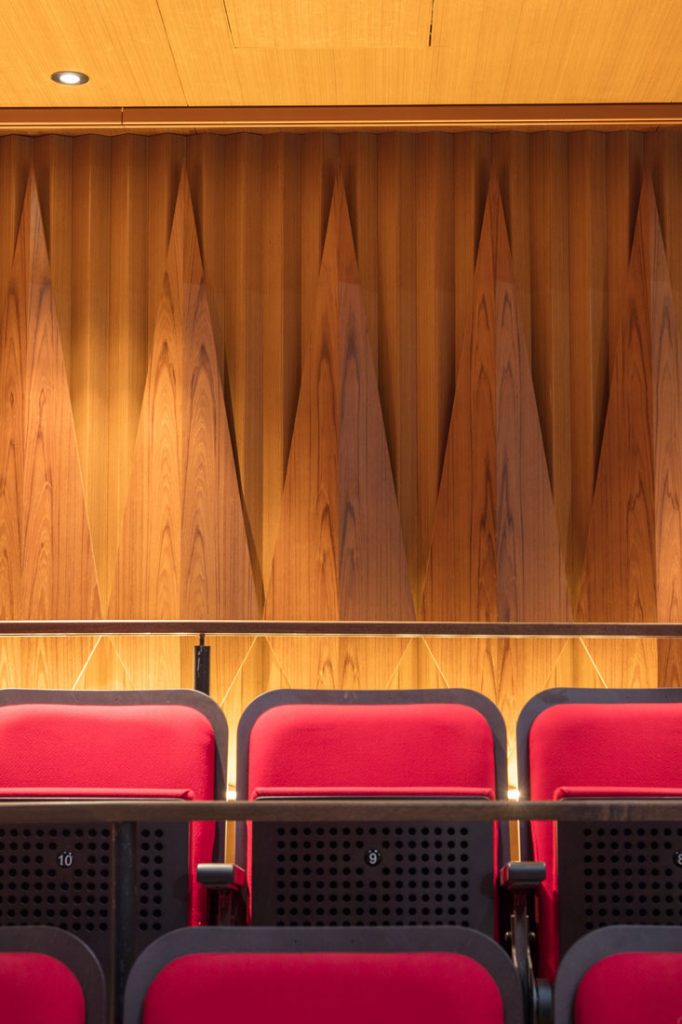 On the floor beneath each chair is a fan, which distributes the cold air in the room. The audience is encouraged to lean on the teak rails for a better view. 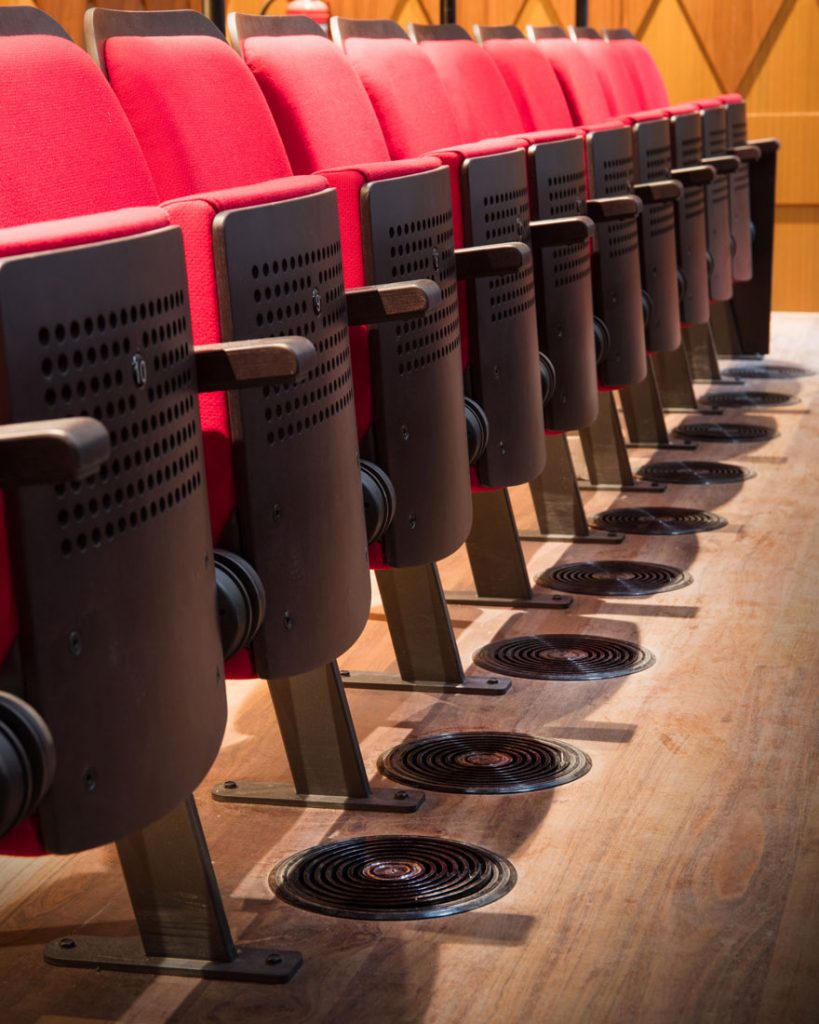 The material palette and soft surfaces work in tandem to create optimum conditions for the human voice, with little or no need for microphones or other vocal enhancement systems. Even from the cheapest seat furthest away from the stage, a performer’s whisper can be heard clearly. 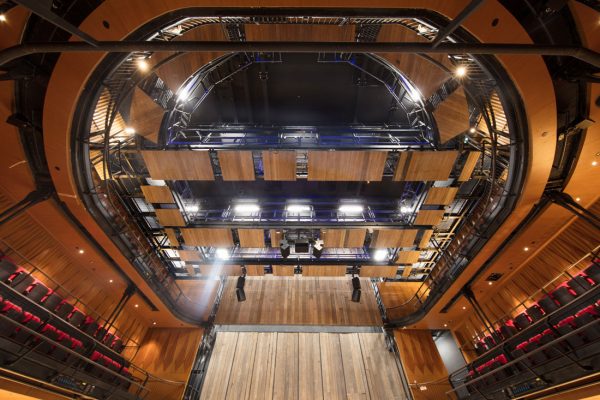 “It is important to also have cheap seats on the house,” says Heng, elaborating on Wild Rice’s mission to make theatre available to a broader audience. In this theatre, the cheap seats are located on the topmost tier, from which the sitter can see the theatre crew at work on the catwalk above the stage. These are the best place to witness the inner working of the theatre – a boon for theatre students. 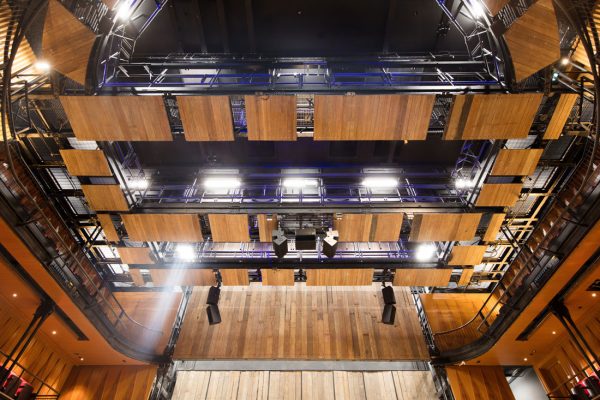 Wild Rice @ Funan’s human touch extends to its technical systems. The theatre is outfitted counterweight fly bars, moveable trolley beams for overhead suspensions, and fully integrated lighting and audio-visual infrastructure, all of which are operated manually, minimising the dependency on computerised systems, as well as creating room for improvisation.

The back of the house area of Wild Rice @ Funan also prioritises human comfort. The original architectural shell of Funan for the performance studio and rehearsal rooms was opaque. Chan and Heng insisted on having windows to let the occupants keep track of time.

Wild Rice @ Funan will have its first show on August 8.