A decided departure from traditional temple architecture, the new block of Wat Ananda Metyarama is a modern architectural effort recalling the Buddhist tale of Siddhartha Gautama. Built in commemoration of the Thai Buddhist temple’s 90th anniversary, the extension block was designed by Czarl Architects who were asked to reinterpret traditional Thai Buddhist style temples for design and cultural currency. Architect Carl Lim elaborates: “The chief monk felt that it was important for Buddhism to stay relevant and ahead of its time in this day and age to continue to attract young followers. The idea of temple extension was to keep the essence of Buddhist tradition but not the physical from. We love that idea that the physical aspect of the new structure was ‘formless’ and not preconceived. The monks were also questioning why mosques, churches and synagogues have updated and evolved into more contemporary architectural expressions yet Thai Buddhist temples were still stuck with the traditional built forms.” Lim shares that one reference was “the way [traditional Thai Buddhist temples’] dramatic shaped saddle roof and ornamentation can be easily reinterpreted. The plan layout is pretty much centred around axis and symmetry.” In their interpretation, the new building takes on a V-shaped plan backed up against a highway and frames a large front courtyard in its winged centre. Experientially, the overall building design references the Bodhi Tree under which Siddhartha meditated and gained enlightenment, with triangular openings creating the abstracted image of light filtering through leaves. The constant change of light and shadow through these windows can be best experienced in the prayer halls, where one may be reminded of the Buddhist teaching – the impermanence of life is its only constant. The program for the extension block, which doubled an existing 600sqm monks quarters that it replaced on site, includes a larger monks’ quarters, additional prayer halls, meditation centres, Dharma classrooms, a museum as well as the aforementioned courtyard space for communal events and festivities. 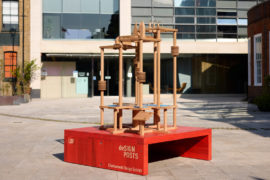 The Designposts project at the 2021 London Design Festival explores the beauty of hardwood while celebrating emerging local talents and the creative history of London’s neighbourhoods.