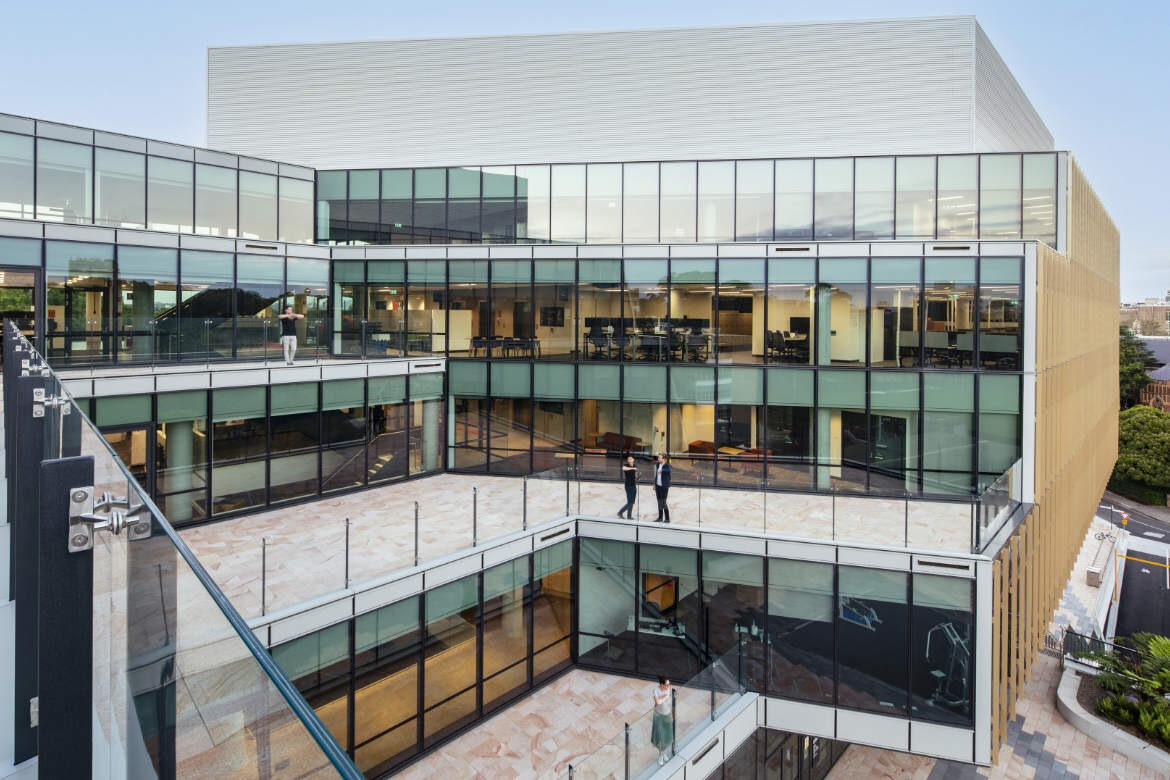 Anyone who has ever visited the University of Sydney’s campus in Camperdown, Sydney, will likely reminisce over the romantic grandeur of its neo-gothic architecture.

But that was then, and this is now. In March 2021, the University of Sydney (USYD) opened the doors to its newest building on campus: a cutting-edge facility dedicated to the disciplines of health and medicine.

Seeded by a generous cheque of AUD$35 million, gifted to the university by the Susan and Isaac Wakil Foundation, the contemporary addition to campus – officially ordained the Susan Wakil Health Building – is the result of an international design collaboration between Australian architecture practice Billard Leece Partnership (BLP) and the American-born firm, Diller Scofidio + Renfro (DS+R).

Contemporary not only in architectural form, but the building also joins the university’s pioneering Charles Perkins Centre, opened in 2014, marking the dawn of a new school order.

“Our design creates a new common ground for the university, the [Royal Prince Alfred] Hospital and the Charles Perkins Centre, all the while respecting the site’s historic significance as a gathering place,” explains Benjamin Gilmartin, a partner at DS+R, who batted for the ‘away team’ as design lead on the project.

Located at the site of two intersecting waterways, the land on which the Susan Wakil Health Building now sits represents a meeting place in Gadigal tradition. In this sense, there is no place that could have been more fitting for the new campus addition.

A key motive behind the project’s commission was the university’s state-supported ambition to bolster inter-professional learning and multidisciplinary research. In the grand scheme, the facility feeds into the locale’s masterplan, which will see the emergence of a new local health precinct.

It is smartly situated within a stone’s throw of the Charles Perkins Centre and Sydney’s Royal Prince Alfred Hospital (RPA), and consummated in 21,500 square metres, dedicated wholly to education and research in the Faculty of Medicine and Health.

Synergies with the local planning office aside, first and foremost, the project was commissioned by the university for the sake of uniting the education, research and administrative functions of several of its diverse and physically dispersed schools of health and medicine.

Namely, it brings the School of Nursing and Midwifery, School of Health Sciences, and the Central Clinical School of Sydney Medical School all together, under one roof.

But it is one thing to consolidate schools and functions by way of a shared address, albeit a first for the university. Re-routing the establishment to instil new ways of working, unify education with practice, and facilitate cross-pollination between diverse schools of thought, is quite another.

To effectuate the systemic change, BLP and DS+R found resolve through a thoughtful interplay of spatial volumes, purposefully planned and programmed to become a conduit for interdisciplinary collaboration and fortuitous encounters.

With this in mind, the architects designed to dissolve the conventional boundaries that stand between the various schools and their inner functions, instead channelling circulation in such a way that ensures interdisciplinary paths do get crossed.

The internal program, described by Gilmartin as “a three-dimensional network of open spaces connected at every level, from inside to outside”, comprises a multitude of focused learning spaces – seminar rooms, clinics, workspaces, a rehabilitation gym, and a 350-seat lecture theatre – plugged into a light-filled central network of informal learning spaces.

Breaking away from the traditional hierarchy of academic facilities which sees education, research and administrative functions assigned to their own floors (and typically staged in that order, from the ground up), all eight floors of the Susan Wakil Health Building are designed to facilitate multiple functions.

Beginning on the ground floor and continuing all the way up, the interlacing circulation traverses throughout the nucleus of interstitial spaces, forming the connective tissue between learning spaces, academic workplaces and clinical spaces within.

BLP and DS+R have ensured that natural light and sight lines up, down, through and out of the building can be accessed from within even the depths of the plan, thanks to a ‘cleave’ created by the staggered building design.

“The key to the success and longevity of this building is its principles of designing with nature,” says Raj Senanayake, a principal at BLP who led the design for the project on the Australian practice’s behalf.

He describes how – by drawing light, views, and ventilation; allowing visual transparency across the facilities; and cultivating active circulation and socialisation throughout the volume, with an emphasis on stairs over lifts – the building itself is designed to embody the holistic ideals that it stands to facilitate the teaching and learning of: health, wellness, and integration.

The ribbon had been cut no longer than a month when Indesign met the BLP and DS+R teams at the Susan Wakil Health Building for an exclusive, design-led tour of the finished facility.

Already, Lisa Carrick, who headed up the Susan Wakil Health Building Transition Program for the University of Sydney, could attest to the project’s success.

Through her quotidian anecdotes – such as the sight of students hanging out, sitting and standing in candid congregation about the monolithic concrete steps that form the showpiece of the entry volume – the team’s design renders were made real.

But there’s no validation quite like that which has come from one of the project’s loudest critics: a stalwart university academic who’d gleaned a sense of comfort from the conventional silos of faculty.

Yet, within a few short weeks since the centralisation of schools, that same critic was reborn an advocate, already experiencing, first-hand, the benefits of inter-professional learning, through the chance encounters they never knew they had been missing