What are the real benefits of co-working spaces? The Workshop @ Lavender elevates the conversation beyond form and smart colour use to address light, space and an acute appreciation for the user. 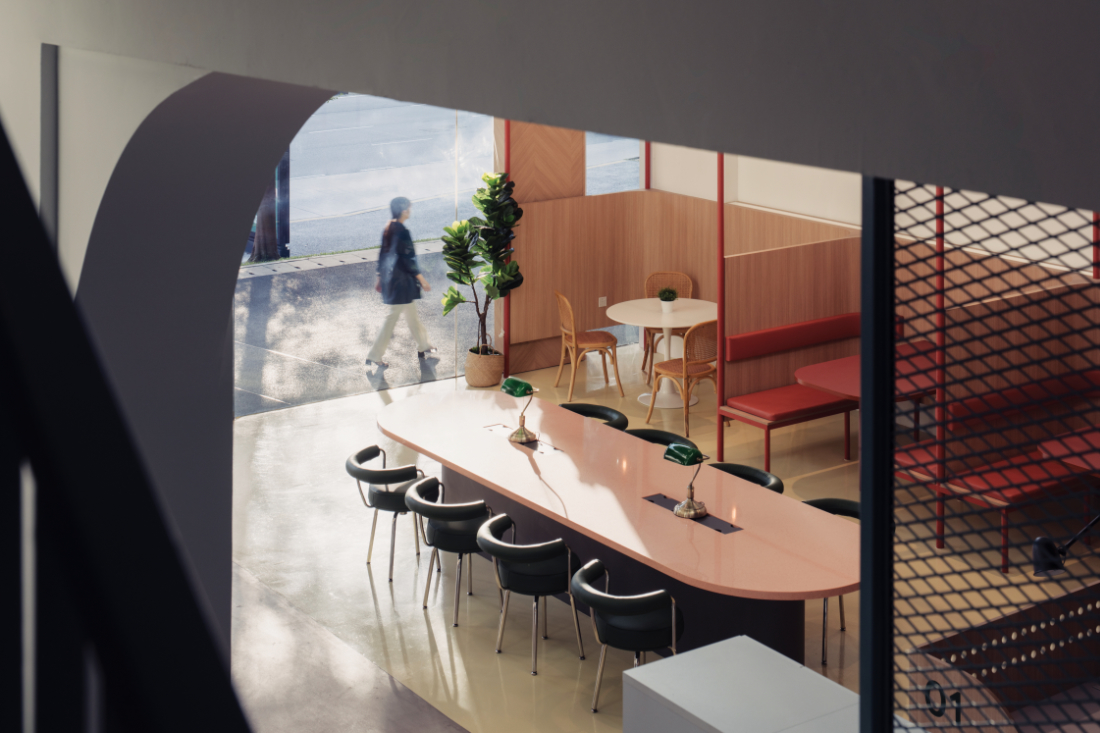 The COVID-19 pandemic has been a lens through which the success of certain workplace concepts becomes clear. The metamorphosis of the traditional workplace is one, reflecting our increasingly non-hierarchical, collaborative and tech-driven world. A highly relevant model is the co-working office, wherein flexible seating and diverse plans speak to the plethora of office workers ranging from singular freelancers to companies who value the system’s convenient and adaptable structure.

Located in Aperia at Kallang Avenue, The Workshop @ Lavender is one such space under CapitaLand’s umbrella of co-working brands. It targets creative entrepreneurs who run new start-ups, SMEs and e-commerce businesses. These range from photographers and wedding planners to light-industrial companies, which no longer need enormous spaces for manufacturing operations that have been outsourced overseas. Research and development laboratories from Aperia’s office towers can also house innovation teams here.

To support such multi-faceted creative processes, rules are more relaxed here compared to conventional co-working models. For instance for the private rooms – of which there are six – it is up to the tenant to use the space for storage, production or post-production needs instead of maximising the potential nine- or six-desk set up; tenants pay by per room rather than per person-usage. The vibrant and fluid design interior inspired by lifestyle destinations reflects the creative focus.

“We felt that The Workshop should not be purely to do work. We saw it as a transient space for the creative, where collaboration and connections are made from time to time. Inspired by the non-linear nature surrounding the work of the creative entrepreneur, fluid and curvilinear forms were used to accentuate their movements within the space throughout the day,” says Lam Jun Nan, the Founder of Open Studio, who designed the space together with Avalon Collective Interior Design (ACID). In-between spaces that are just as – if not more – pertinent than the rooms and desks themselves.

Curves on the floor add interest to the rectilinear footprint that was yoked from two shop units. The bold column-and-beam structural grid left over from demolishing dividing walls, frames activities across the double-storey space. Curves in the structures’ corners soften the harsh, 90-degree angles and imbue the space with a playful, Art Deco feel.

A scalloped Turkish-blue entrance wall leads in towards a bar counter that can be used as a work area and also encourages casual gatherings. Eschewing the typical reception desk, a community manager at the bar is attentive to guest and tenant needs.

As The Workshops’ corporate colour, blue features prominently. It also dresses the private rooms and staircase merged from two units in the rear. “The latter doubles as informal seating or an amphitheatre during events,” says Richard Lau, Director at ACID. It is one of the “micro environments” the design team arranged around the central bar to support diverse activities and work habits, such as doing focused work at the table followed by discussions at the bar. They all create opportunities for very specific activities to take place and were inspired by the varied seating at Starbucks – what the design team considers to be the original co-working space.

There are high stools at the more open realms of the bar and mezzanine. Booths and an eight-seater common table work in tandem to cater to casual discussions and collaboration work. A cluster of fixed desks with raised walls facilitates concentrated work. A palette of soft colours help with wayfinding and seat differentiation. “For the finishes, we favoured a colourful but ‘dirtied’ version of pastel colours with smaller-grain textures. This, and the distinctive curvature forms, makes for a fun and unusual office experience,” says Lam. Pale yellow, raw concrete and warm wood at the steps and fixed desks temper the exuberance.

Rather than squeeze in more desks, both client and designer were sensitive to the quality of space. Square footage is sacrificed for the uplifting loftiness and ample space between seats. The centre opened not long before the pandemic struck. It is interesting how The Workshop’s dynamics have altered since. Occupancy spiked late last year when companies looked to co-working spaces to provide employees alternative work venues outside of home when they are not rostered to be in the office. While initially more tenants took up the private rooms, rendering the flexible places quieter, the inverse is now true. Hot-desk workers now fulfil the potential of the seats upfront.