In his in-depth exposition of teamLab , Dr Yukio Lippit (Professor, History of Art and Architecture, Harvard University) provides an insightful introduction to teamLab’s origin, which this article borrows for a more holistic understanding of the collaborative’s work.

Founded by a group of engineers (Inoko Toshiyuki, Aoki Shunsuke, and Yoshimura Jō) from top universities in Tokyo during the Internet bubble at the beginning of the 21st century, teamLab started off in the field of web design, where initial success was found. Subsequent development in Internet technology and the momentum towards user-generated content helped to chart teamLab’s creative direction as ‘interconnectivity’ and ‘interactivity’ became the collaborative’s prominent themes.

While these themes are evident in the approximately 50 digital artworks featured in ‘MORI Building DIGITAL ART MUSEUM: teamLab Borderless’, it is teamLab’s masterful play on the boundary between art and science that creates the surreal aesthetic experience in their creations. 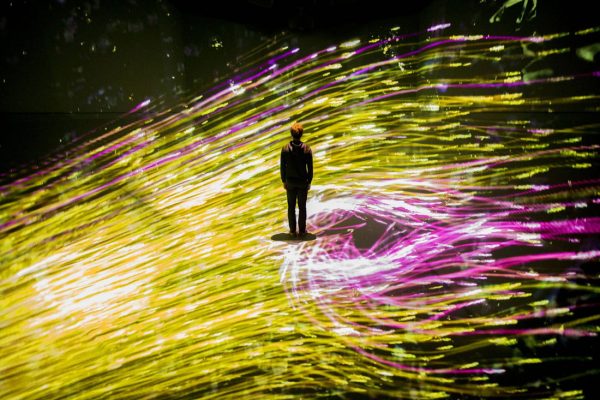 ‘The Way of the Sea, Transcending Space – Colours of Life’ in the ‘Bordlerless World’ zone features a shoal of fish in a ‘cave universe’

Their adeptness at moulding art and science together can be directly traced to the diversity of talents at teamLab – an interdisciplinary group of specialists such as artists, programmers, engineers, animators, mathematicians, architects, et cetera. This unparalleled scale and diversity sets teamLab apart from other art collectives. However, the feat of managing such an eclectic, creative group toward a common vision should not go unmentioned.

teamLab’s works are constantly evolving. The digital world can be one filled with negative energy (cyber-bullying, fake news, election manipulation). teamLab’s more recent works are decidedly intent on bringing out the benign aspects of this technology – by rethinking and showcasing the possibilities of augmented learning and play (for example, teamLab Athletic Forest). According to Dr Lippit, this direction can be read as an “anti-techno-dystopia” response from the creative practice. 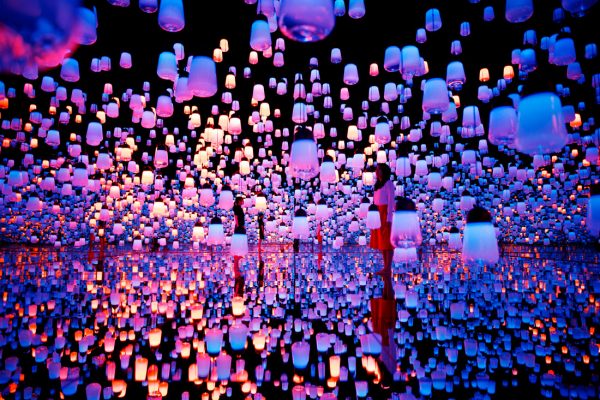 ‘Forest of Resonating Lamps’ in the ‘Forest of Lamps’ zone

The collaborative interdisciplinary formula of teamLab holds important learning points for architecture, which is increasingly limited in its traditional role. In fact, there has been movement in that direction, such as the formation of UNSense by UNStudio this year. If the inertia for change can be overcome, exciting possibilities await as we imagine the kind of revolutionary experiences created by teamLab breaking out of the boundaries of an exhibition hall and entering the daily lives of people. 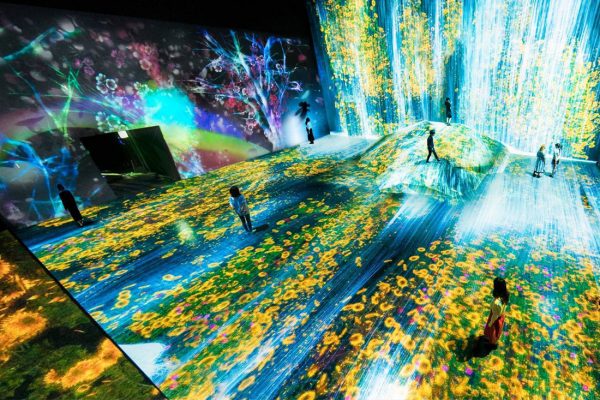 ‘Universe of Water Particles on a Rock Where People Gather’ in the museum’s ‘Bordless World’ zone (one of five zones). Water appears to flow in from other zones

“As people walk freely around teamLab Borderless they lose themselves in the artwork world. The borderless artworks transform according to the presence of people, and as we immerse and meld ourselves into this unified world, we explore a new relationship that transcends the boundaries between people, and between people and the world.” – Toshiyuki Inoko, Founder of teamLab 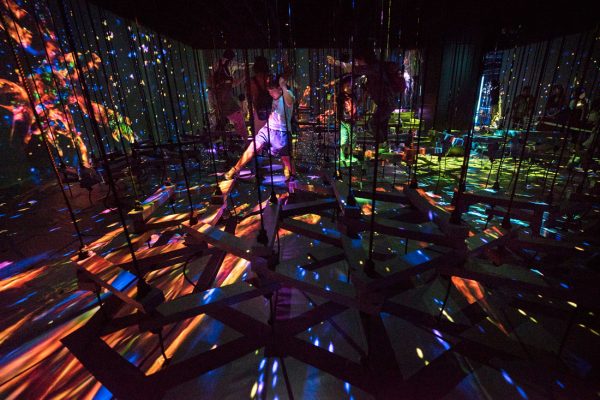