A Social Space With A Message By H&P Architects

S Space in Dong Van, Vietnam, is much more than a cultural and coffee space. The winner of the INDE.Awards 2019 Social Space category (partnered by Woven Image) is also a statement about unchecked development and loss. 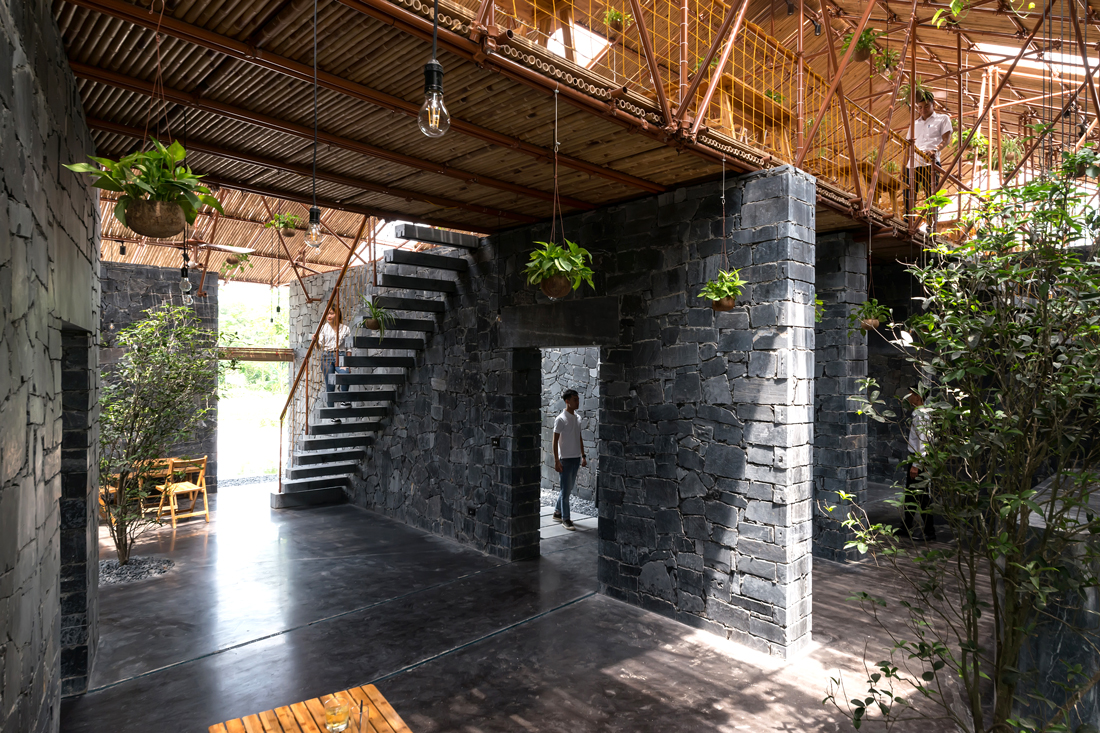 The Dong Van district, just south of Hanoi, is like many areas in Vietnam in that it’s undergoing rapid urban development. The Dong Van industrial park was established in 2003 and has already reached a site area of around 1,000 hectares. Unfortunately, the pivot away from agriculture has had some undesirable side effects in the area.

Explains architect Doan Thanh Ha, co-founder of H&P Architects, “Since its establishment, the industrial park has brought about numerous economic benefits for local development, but it has, at the same time, resulted in environmental pollution and social evils (drug addiction, gambling and theft). Due to the current scarcity of rice farming land (agricultural land being being used for industrial development), women aged from 40 to 60 find it hard to get a job. Meanwhile, a high number of labourers working for the industrial park are seasonal laborers.” 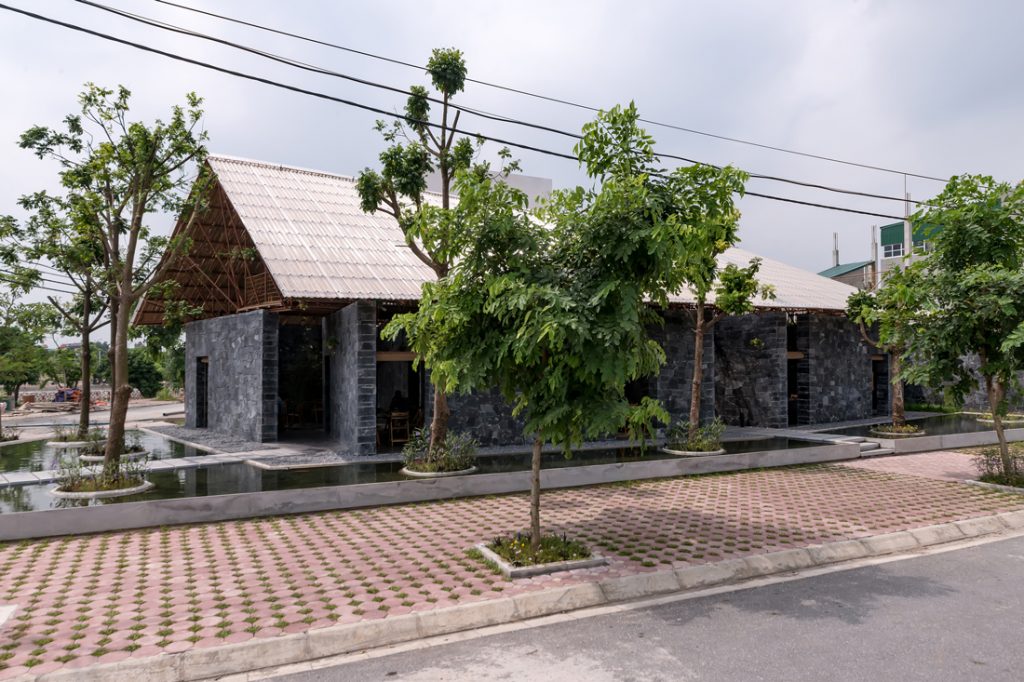 Doan became aware of the depth of the issues in Dong Van when a young businessman from the area came to the H&P studio with a proposition for a social space that showed his aspirations for the local community. Doan’s client lamented how spaces that once served as social and cultural destinations in the villages have been destroyed by environmental pollution (water, air and noise) from the industrial activity, and that alternative social destinations for the new seasonal labourers were in short supply.

“His sincerity and patience finally convinced me of the project after two months,” recalls Doan. “When the project came into use, I was so pleased as I was right to change my mind in this case and follow his initial intentions. My unspoken thanks go to him for his good will and vision.” 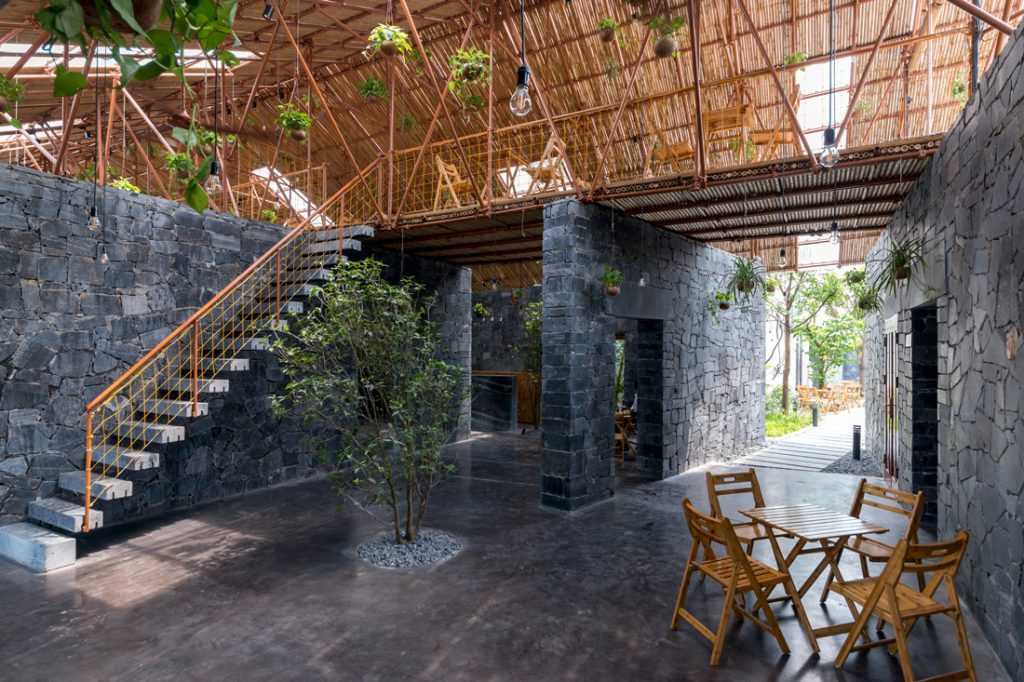 S Space is a sheltered yet open space for the community with a focus on periodical cultural and artistic programming, and containing a cafe area that provides daily activity. Composed of reclaimed stone and steel scaffolding, as well as bamboo, it stands distinctly from the new row houses that it sits among as well as the cleared land opposite it, which awaits development. 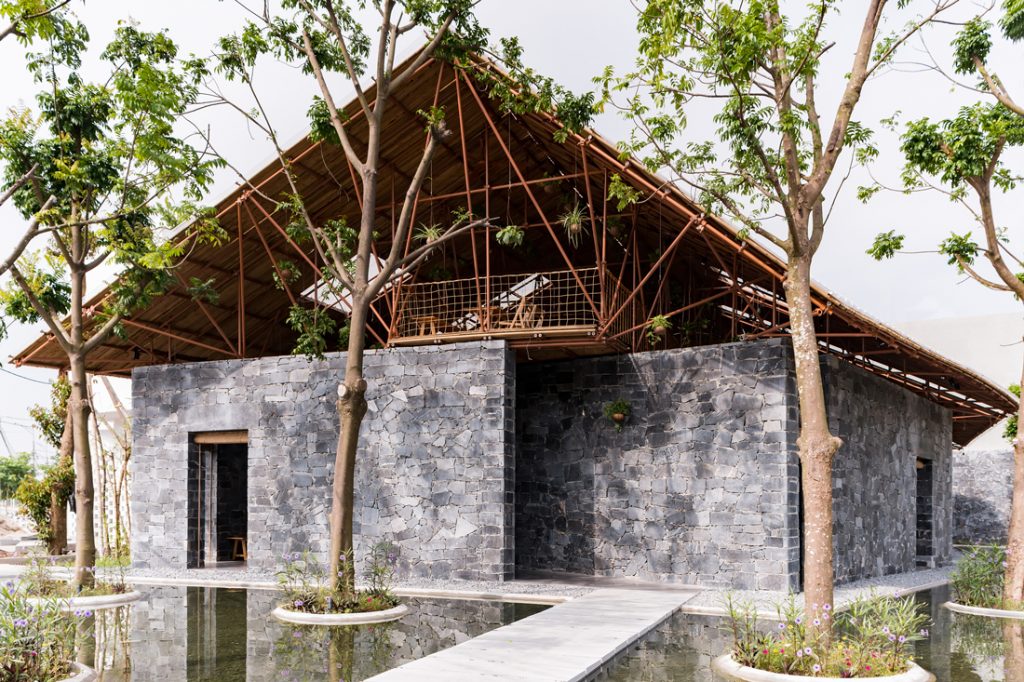 “‘Non-identity’ architectural projects (i.e. row houses and reproduced gable roofs lacking local architectural identity) are popular in Dong Van, as they are in many places in Vietnam,” says Doan. But at S Space there is clearly a strong intent with regard to spatial and material composition. 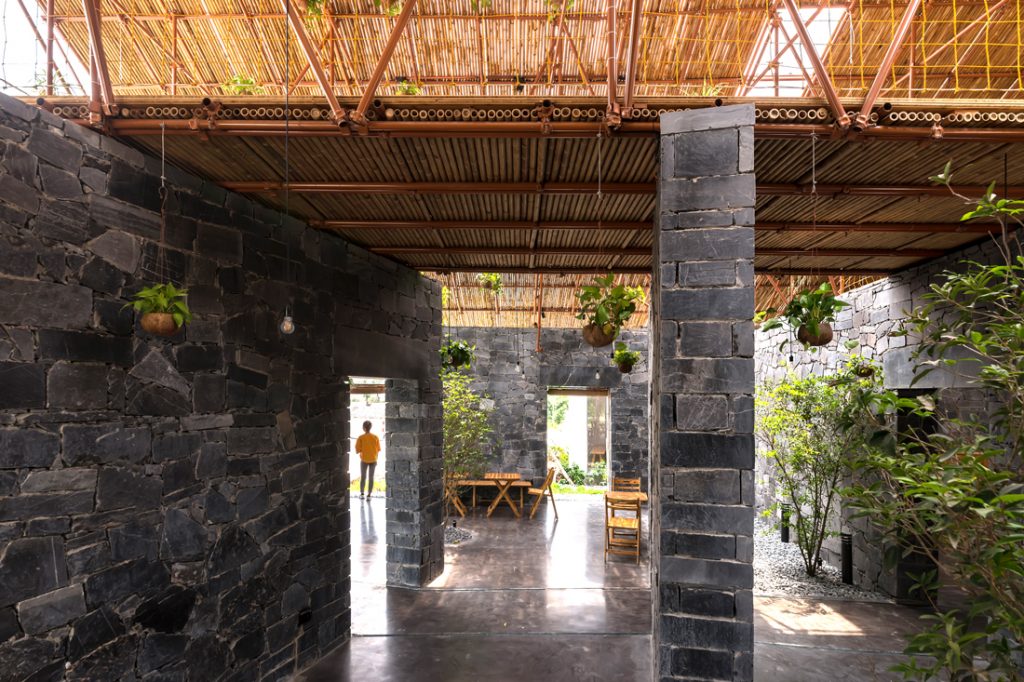 H&P drew design inspiration from a well known natural attraction just over 30 kilometres from Dong Van. The site of Kem Trong is known for a pair of cliffs carved by the Day River and perforated by caves and grottoes. Its beauty saw it become the subject of poetry in the eighteenth century. Yet despite its value as a tourist attraction, Kem Trong has recently been severely damaged by unchecked stone mining. “The local people feel the deep hurt by the fact that Kem Trong is being destroyed,” laments Doan. 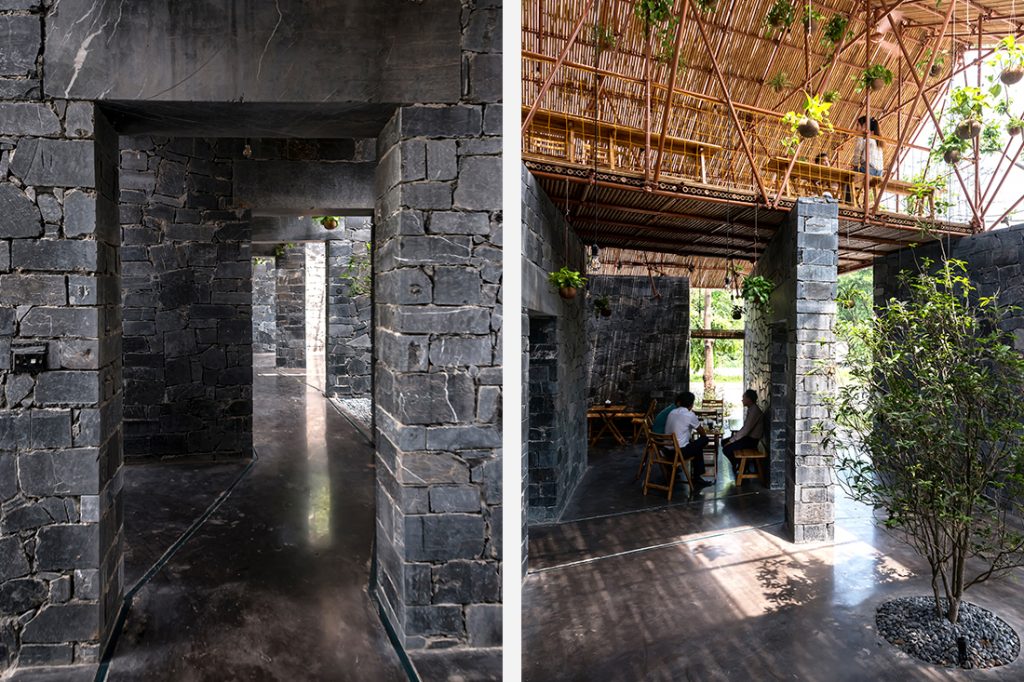 The design of S Space makes use of waste (rock debris from Kem Trong and discarded rocks from trade villages, as well as steel scaffolding pipes from construction sites) to express the nostalgia and regret of local people. The interior resembles a gap – a river – between two mountains. Stone walls (400 millimetres thick and 3.4 metres high) zigzag intermittently and connect randomly through doors and openings, enabling multiple approaches. The doorless space, says Doan, allows architecture to widen its margins for creativeness. 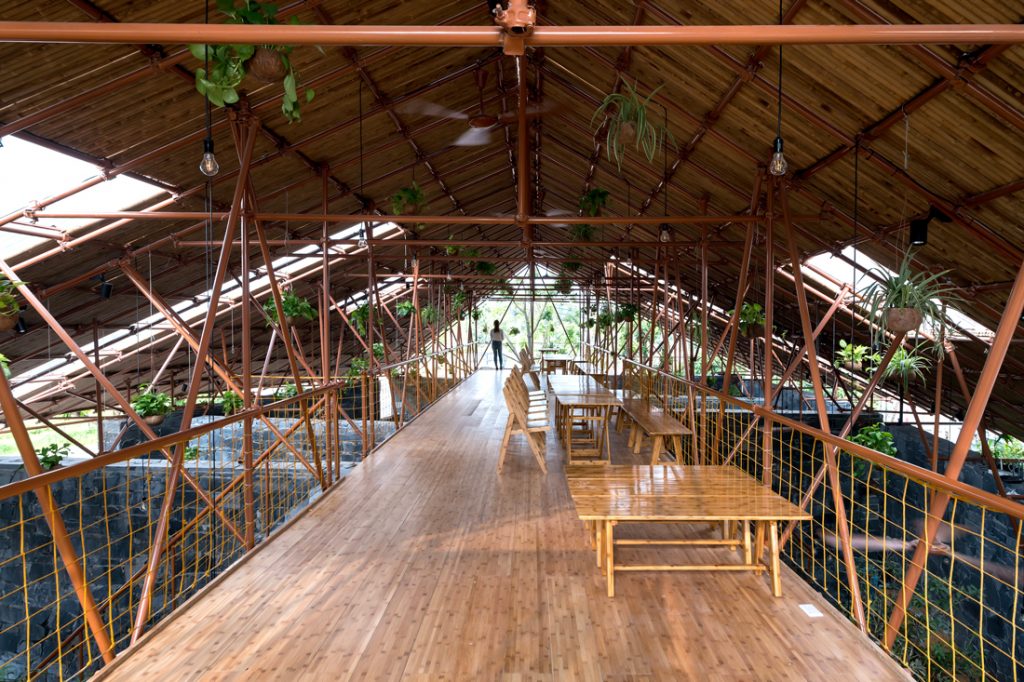 A ‘big cloud’ of lightweight roofing and mezzanine flooring created with steel scaffolding pipes and bamboo, makes a fragile but solid and elastic structure in contrast to the thickness and density of the rock ‘cave’ beneath. While trees help regulate the microclimate and bring people closer to a sense of nature, sprinklers and mist sprayers on the transparent polycarbonate roofing keep it cool on hot summer days.

The ‘S’ in ‘S Space’ indicates “Save the Stone and Scaffolding” – a call for greater awareness of the unplanned exploitation of natural resources in Vietnam today. Says Doan, “Stone mining is destroying natural rock formations with historical and cultural value, resulting in a serious imbalance between the natural ecosystem and the human one. In this sense, S Space conveys the message: ‘Architecture bears responsibility for the natural and socio-cultural environment.’” 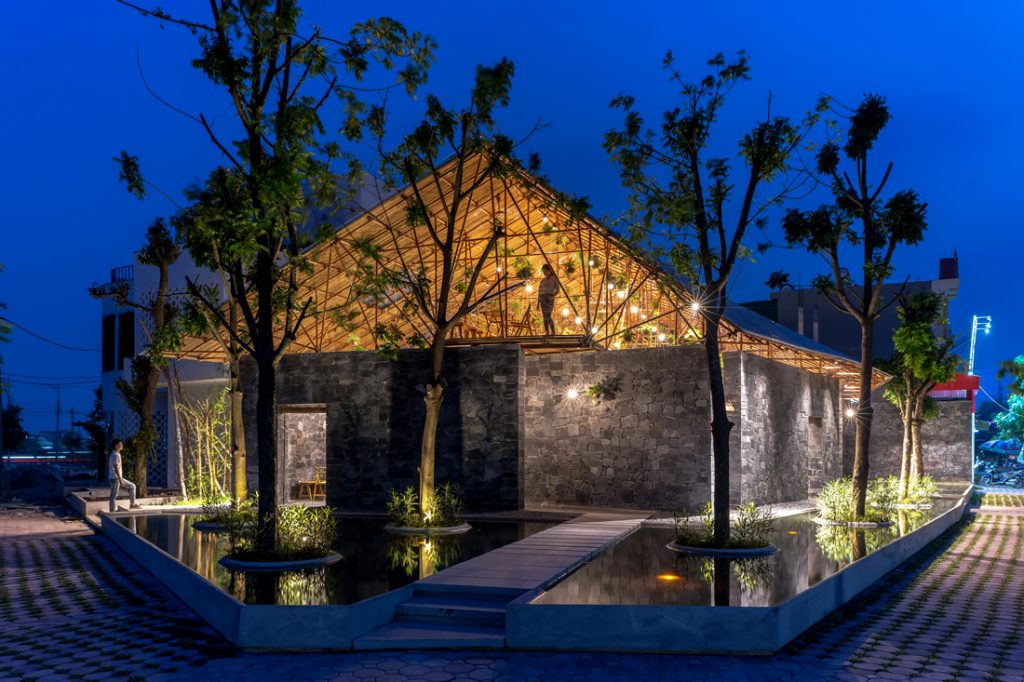 Thank you to Woven Image – The Social Space partner of the INDE.Awards 2019.