The newly minted shophouse office of Realys Singapore reflects the culture of the design-and-build company and the unity of the people who work there writes Iliyas Ong. There are agencies that bend over backwards for their clients, and there are others that fight back. And then there is a smaller breed of firms that prefer to offer their clients a glimpse into how they work and, in doing so, smoothen the friction typical of client–vendor relationships. If its office is anything to go by, Realys Singapore belongs to the latter group of companies. The 2,215sqft space, which opened in October 2013 and occupies the third storey of a shophouse along Amoy Street, was designed with both the client and the firm’s employees in mind. As most of Realys Singapore’s staffers had been colleagues in their previous jobs, the workspace had to harness the familiarity and ease of their professional bonds. Additionally, the office had to physically reflect that rapport to present to potential clients an image of confidence and unity. “We worked together for four to five years, so we’re all quite comfortable with one another,” says Andrew Carmichael, a Director at Realys, who reveals that the firm looked at 20 buildings before settling on this shophouse. “It’s very important that the culture of the organisation reflects that, and our working environment reflects that.” As such, everyone besides the designers works on a hotdesking basis. The office has zones dedicated to collaboration, intense solo tasks, studio work, and engagement with clients—all of which are stocked with furniture from Steelcase, BW and Vitra. The entire office is spread out in a ‘U’ shape: one tier for entertaining clients (and the occasional after-hours tipple) and the other for Realys’s 10 permanent employees. A meeting room forms the horizontal bar of the ‘U’ to join both tiers. Where Carmichael’s prior company provided design consultancy services, Realys specialises in the design-and-build market. According to the Director, this changes the way he interacts with clients, which has in turn influenced the design of the workspace: “We want the clients to come to our office rather than us go to them and pitch. [We want] them to come and understand and experience the culture of Realys.” And neither did Carmichael want a sleek steel-and-glass affair you’d expect to find in Central Business District skyscrapers. “There was no point in us trying to put a corporate office, Marina Bay Financial Centre look-and-feel into Amoy Street, Chinatown. That’d be nuts!” he laughs. Rather, he took inspiration from the historical context of the district. This is apparent the moment visitors walk in and are greeted by a counter reminiscent of old Chinese shops. Behind the counter are racks upon racks of material samples, which can be pulled out and shown to clients—just like in a Traditional Chinese Medicine emporium. And in narrow corridors leading to the bathrooms, Peranakan-inspired tiles further express the historicity of the space and its environment. Carmichael explains that the office had to strike a chord with clients as he believes people start forming opinions visually. He cites an example with one client, Changi Airport Group. When they visited Realys, they were immediately engaged with what they saw, he says. And it isn’t just a veneer. Carmichael notes that while the client factored in quite heavily into the design brief of the office, he also wanted it to be a handsome studio in which employees are eager to work. “We don’t think it’s a crime to actually enjoy working,” he says. “And we want to keep that spirit; for us it’s not about timesheets or what profits you make on projects. We feel that the numbers will come. It’s just that if we create the right culture as an organisation and the right personality as people, then clients will gravitate to that. They’ll trust you. It’s authentic; we’re just being ourselves. We have confidence in what we’re doing.” 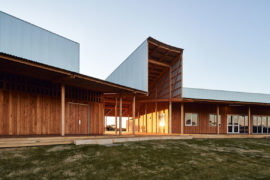