A Heritage Brand For New Times: Raffles To Open A Second Singapore Hotel On Sentosa

Yabu Pushelberg has been working with DP on the design of an ultra-luxury low-rise Raffles property that will bring a modern spirit to Sentosa. We spoke to Glenn Pushelberg about the project and the hospitality sector in general. 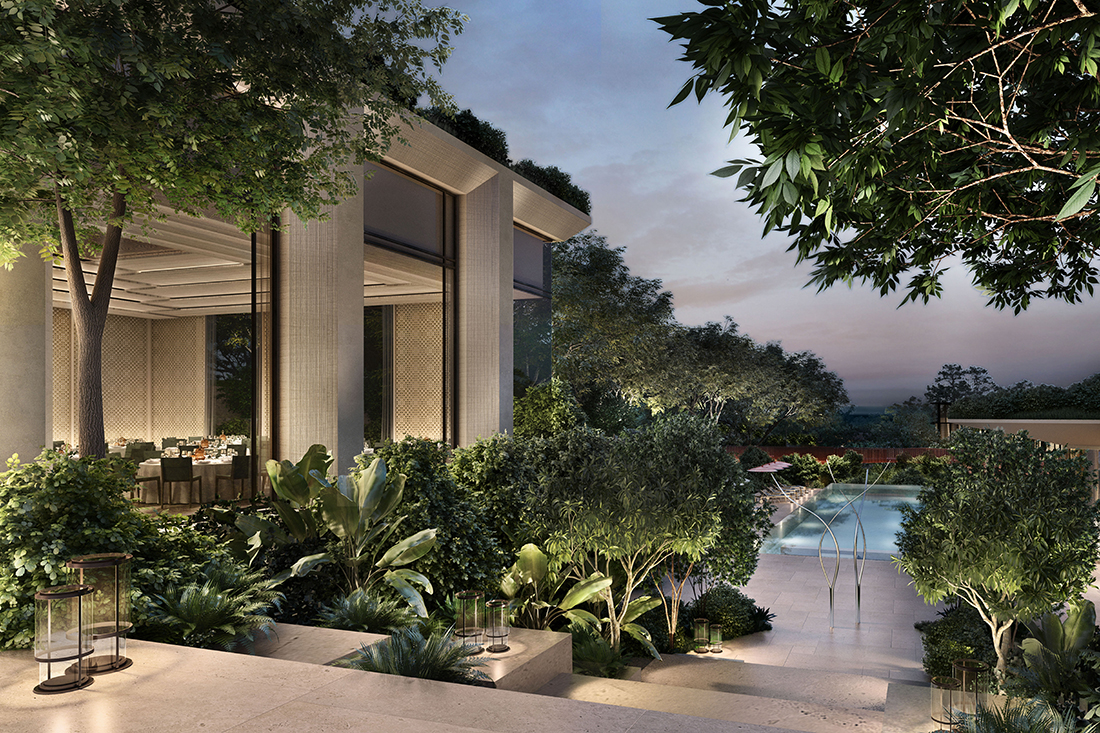 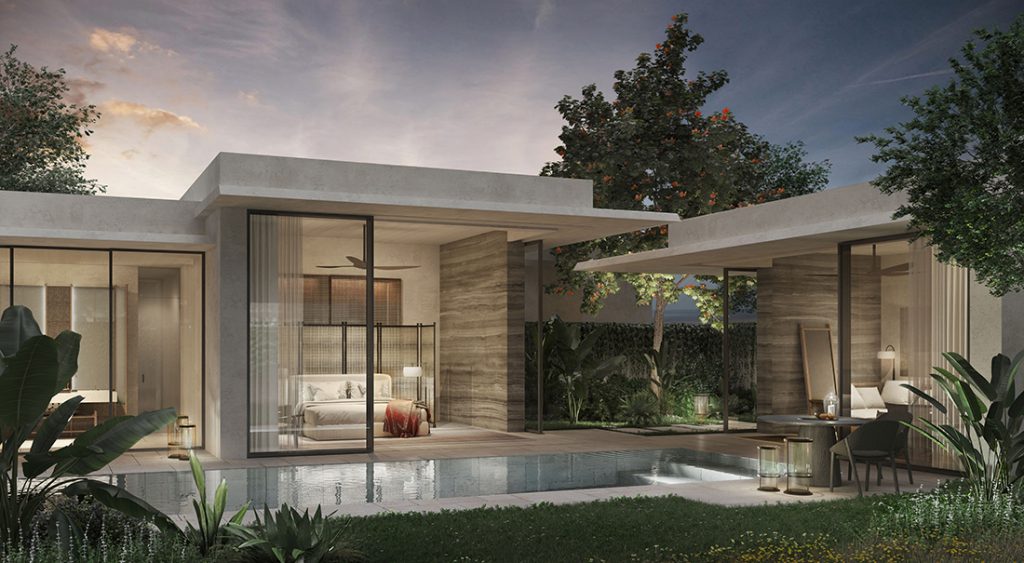 The Raffles brand is synonymous with Singapore, but it has been owned by numerous foreign entities over the years. Its current owner is France-based Accor Hotels (which also owns Pullman, Fairmont, Swissotel, Sofitel brands and many others – a total of 33 brands), which bought the Raffles brand in 2015. Raffles Hotels have popped up around the world; a total of 14 properties are spread across Cambodia, China, India, Indonesia, the Philippines, France, Poland, Turkey, Saudi Arabia, the UAE, the Maldives, the Seychelles and the USA.

Additional Raffles properties are in the pipeline for Udaipur, Jaipur and Bali. But the development of a second property on home ground is a big event – and therefore represents a particular challenge from a design point of view. 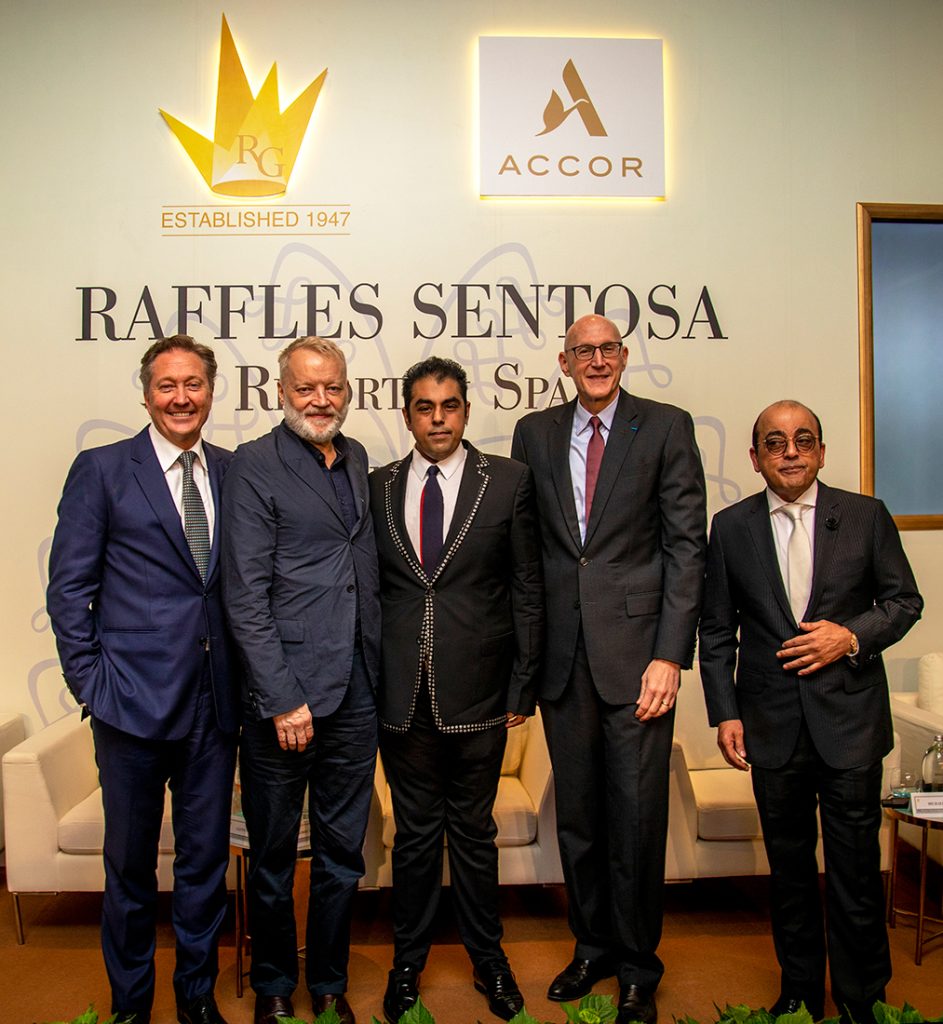 “Custodial responsibility” was the term used by Peter Wilding (Managing Director of Royal Group) in reference to the site, during a media briefing about the project on 25 June 2019. But he could have equally been referring to the brand itself. “We are proud to bring a new interpretation of the iconic Raffles brand to a pristine piece of land on beautiful Sentosa Island,” he said, adding that it is a ‘return to the beach’ for the brand.

“We believe both Raffles hotels in Singapore will offer complementary experiences: one a historic, heritage hotel in the heart of the city and the other a modern, elegant resort experience,” said Wilding.

“We believe both Raffles hotels in Singapore will offer complementary experiences: one a historic, heritage hotel in the heart of the city and the other a modern, elegant resort experience.”

The Sentosa property will incorporate 61 private villas ranging in size from 260sqm (one bedroom) to 450sqm (four bedrooms) in a garden setting. Each villa will have its own private swimming pool and terrace. Facilities will include a bar, restaurants, fitness centre, celebrations room and two meeting rooms.

Yabu Pushelberg directed the design of the architecture, landscape, interiors and lighting. Narrative was used as a means of grounding the design with a balance of tradition and modernity. At the media briefing, Glenn Pushelberg (Co-Founding Partner of Yabu Pushelberg with George Yabu) recounted the story his team created for the property – the tale of an elegant Singaporean woman moving through defining moments in her life.

She begins her journey as a girl in a traditional family, learning the value of heritage. As a young woman, she leaves home to pursue international travels where she is exposed to different cultures. Upon returning home, she connects her new learnings and treasures with her roots. 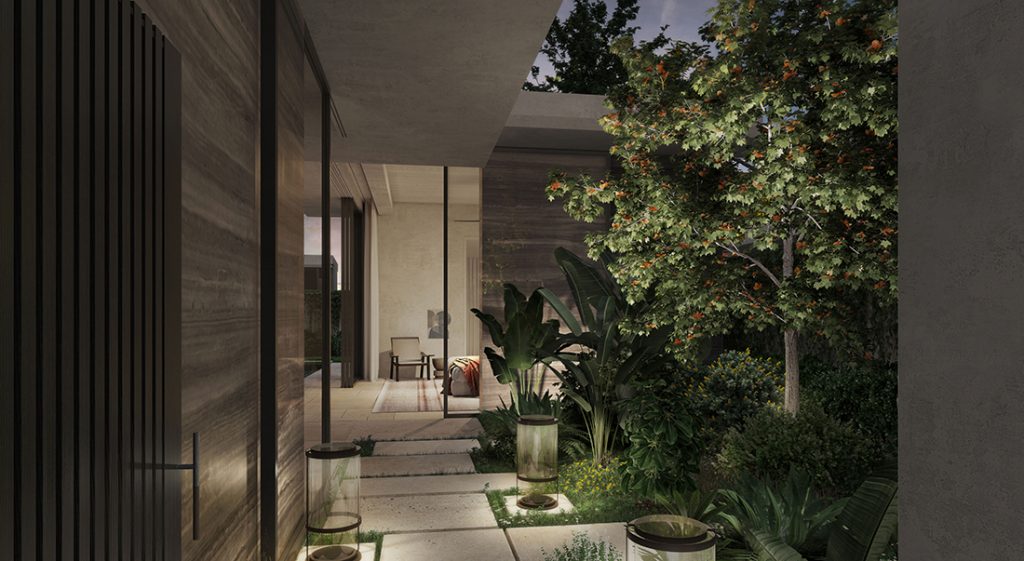 Translated into design for the Raffles Sentosa, Yabu Pushelberg presents a fusion of past, present and future – and a gradual immersion in landscape as one moves deeper through the spaces of the property.

Indesignlive.sg had the opportunity to interview Pushelberg after the media briefing. We sought deeper insights into the Raffles Sentosa design as well as Yabu Pushelberg’s perspective on hospitality design today. 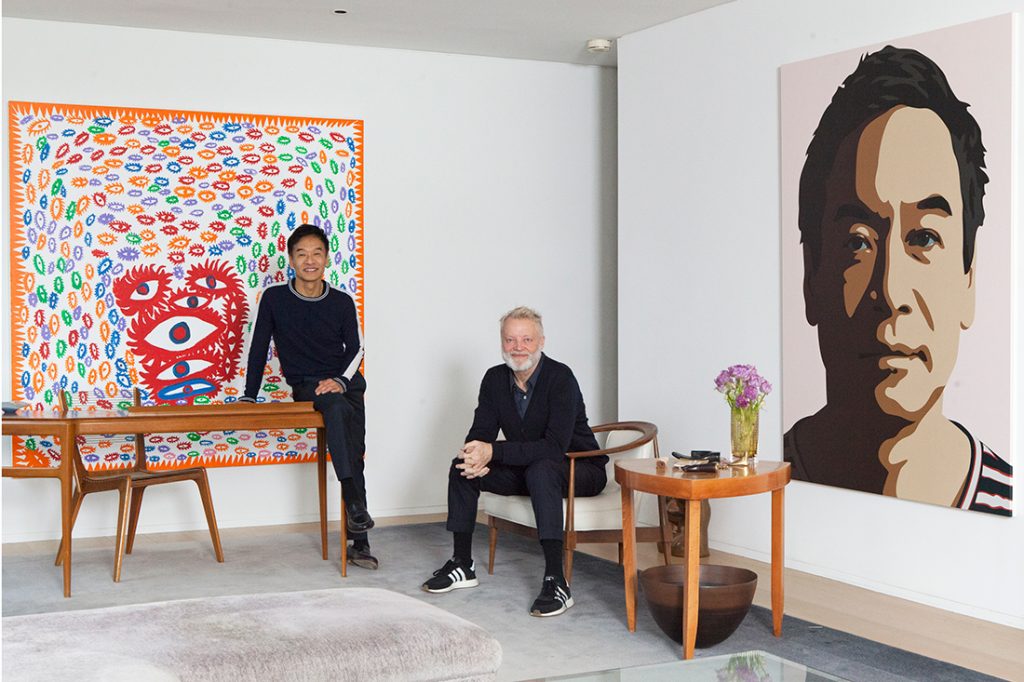 You began with a story. Why is narrative so important in hospitality? Is it more so now than before?

Glenn Pushelberg (GB): It’s a technique we’ve been using for a while, and one we’ve been perfecting and refining. What narrative does is makes you think about all of the issues involved in a project – for example, [in the narrative I shared earlier] I was touching on the site; touching on the relationship between the old Raffles and the new Raffles; touching on the fact that Accor is a modern France-based brand; that there’s a component that’s creative; and that food is a part of it.

By giving the story a personality – a person, or a couple, or sometimes a series of couples – you imagine what that person’s life is like. What we do is visualise that, we pick a photograph of what the person would look like, what they’d wear, what their watch is, what their car is, and their history; and that way you get a project that’s unique and specific, rather than, ‘Oh I did this hotel before, would you like this again?’ Or ‘These are my subjective likes and dislikes.’

“Raffles has such a clear history, and the Singapore Raffles is really the icon of the brand. You have to do something that creates a new iconography for
the future.”

What does narrative give to consumers?

GP: For consumers it [helps them] understand that there’s a clear personality to the project – that it has its own life and voice. We imagine the kind of person that would stay in that hotel as an informed traveller – they travel a lot, they see a lot, they do a lot, and so they have a perspective on things. They’re willing to pay a little bit more for a special experience.

In this project we’re doing treehouses – private dining rooms in the sky. You go up to them via bridges. At the beginning I think the operator thought we were crazy, because that’s not how you operate a restaurant. But to us it’s something special and unique to the project. Raffles has such a clear history, and the Singapore Raffles is really the icon of the brand. You have to do something that creates a new iconography for the future. 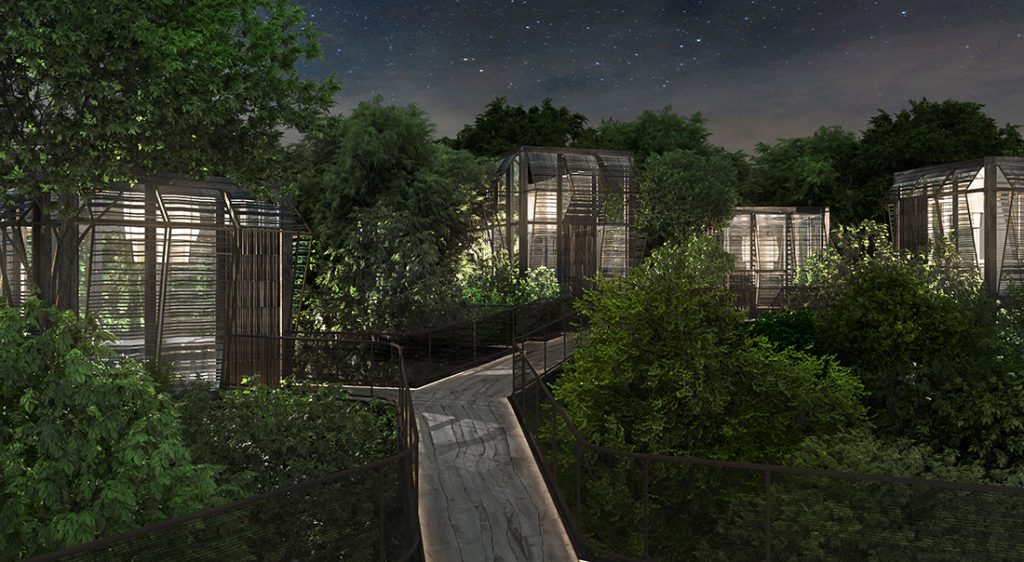 What are the key issues you want to address with your work in the hospitality sector these days? Given the shifts that have taken place, what’s front of mind for you now?

GP: Everybody has talked over the last five years about how people want experiences. People travel but it’s not just about going to a place, it’s about what happens in the place. Sometimes it’s very passive, sometimes it’s very active. I think the journey is part of it… How do you go from an urban resort that’s very tailored like Sentosa, deep into the jungle – very untailored – and how does it all dissipate? This makes it interesting. You’re creating these journeys. It’s not just about what the room looks like; it’s what does the journey feel like? People want memories and experiences.

Heritage is a significant part the Raffles brand. How do you bring a sense of the contemporary, or new meaning to heritage in this context?

GP: You may be curious to go to the old Raffles, but we want to create a different experience at the new Raffles so people will travel from one to the other. If you try to replicate what’s there in a resort, it’s going to be flat. How do you have the principles of being stately and strong – as the old building represents – in a contemporary building… which is a kind of twist on what you think it should be?

In the old Raffles we were looking at the order of things – the order of windows, the colour of the building, the light with the dark floors, and the dark wood furniture. How can we do a modern version or a reinterpretation and make sure we keep the principles of colour, materials and order, so there is a relationship but it’s abstracted and it has a new voice? 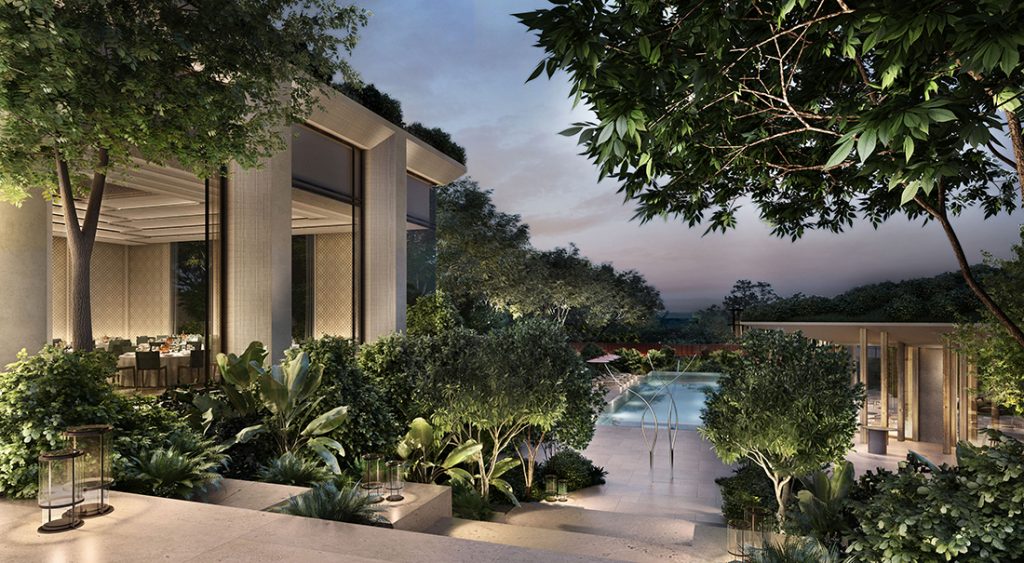 The villas focus on a relationship between the indoor and outdoor spaces.

GP: There are two buildings: the bedroom-bathroom building that opens up, and the living room building. We open up the corners of those two pavilions so they talk to each other. It will seem natural to move from inside to outside to back inside again – there are no barriers. So inside and outside feel ubiquitous.

That sounds like an interior that wouldn’t need a lot of mechanical cooling. Was that important to the client?

GP: I think what is important is that people have choices. So if you like the fresh air or the heat, you can enjoy it. If you want to close it up and be cool, you have that choice. What people look for in any hotel is control of their lives. They want to have choices for where they can eat, drink, work and play. There’s a history of segregating spaces [in hotels], but this is not the way customers are thinking. Customers want something more ubiquitous. A lobby bar doesn’t have to be a bar; it could be a lounge where you can read a book, have a drink, socialise, or have a bite to eat… We want to live in a more fluid modern way.

“I think what is important is that people have choices.”

What directions do you see consumer preferences taking in the next few years?

Yabu Pushelberg has several projects set to open in our region in the near future. Look out for Park Hyatt Shenzhen and the Rosewood Guangzhou. See some of the studio’s completed hotel projects in our gallery: