Rethinking The Public-Private Divide In The Coworking Space

Coworking is becoming a large and competitive industry in Asia. It has therefore also started to differentiate, with more spaces now designed for specific local market segments. Publik Office, backed by Korean investment firm Daewon and originally conceptualised as a platform for small and medium-sized businesses to connect with investors like Daewon, was further fine-tuned to appeal to a more focused community. 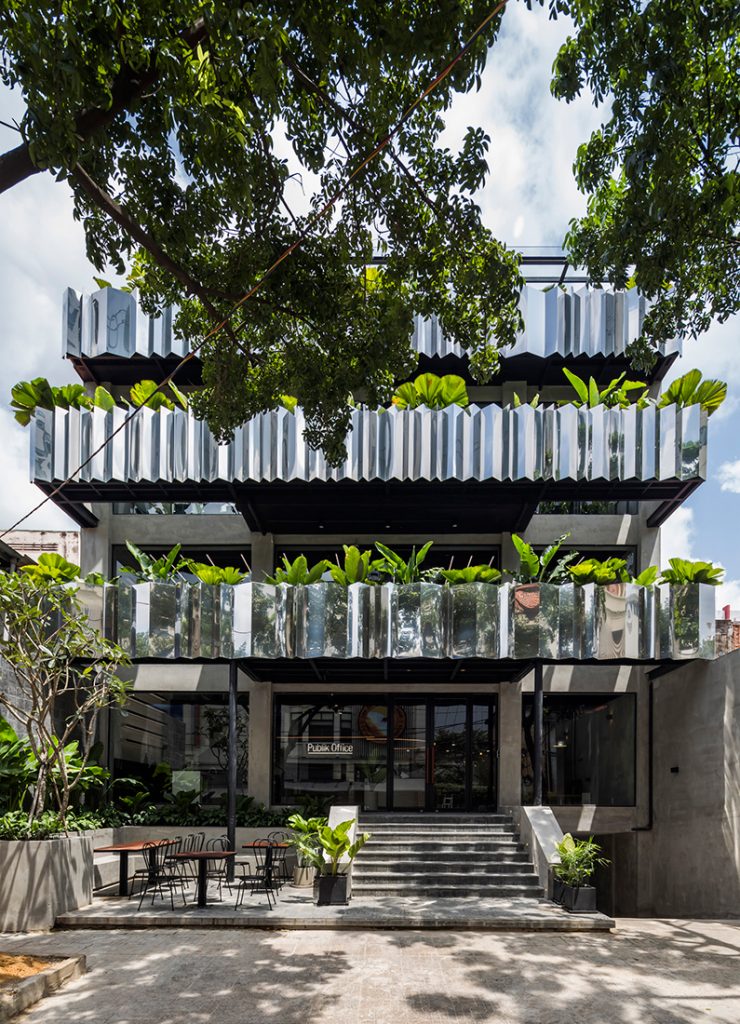 Publik Office is a boutique coworking venue that targets a young and growing community of creative and design-minded businesses in Ho Chih Minh City. The spatial design was undertaken by locally based Sanuki Daisuke of Sanuki Daisuke Architects (SDA).

Just how ‘public’ can a shared workspace be?

The concept was inspired by coworking cultures in Berlin, where niche, industry-specific workspaces are popular – such as those for artists and designers (for example, ESDIP Berlin) and even for carpenters. In this respect, Publik Office bucks the trend in Vietnam, where coworking spaces tend to cater to a generic and unrelated assortment of businesses. 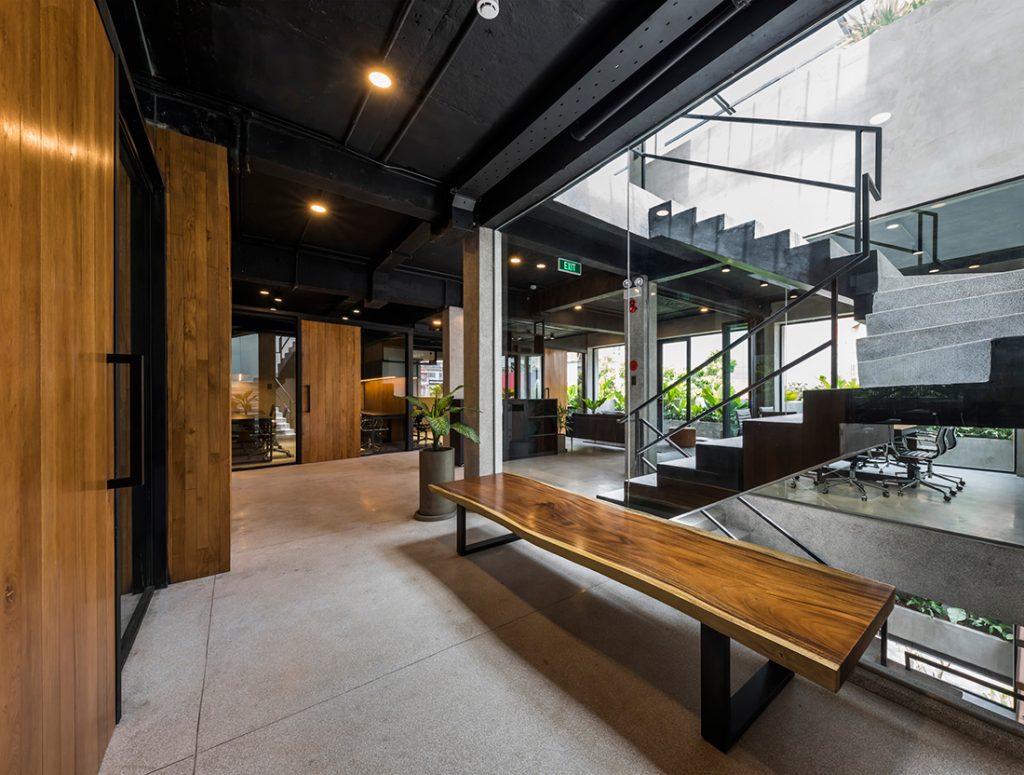 Daisuke began the design process by examining notions of private and public spaces in the coworking typology. He shares: “The coworking space is a new building type. It’s neither a cafe nor a regular office. When we started this project, I thought that it could be like a public space – similar to a public library. It is named ‘Publik’ but of course this building is a private space. However, I think the ‘public’ feeling – where everyone freely selects a space to work and where the office opens to the city – is important for this project.” 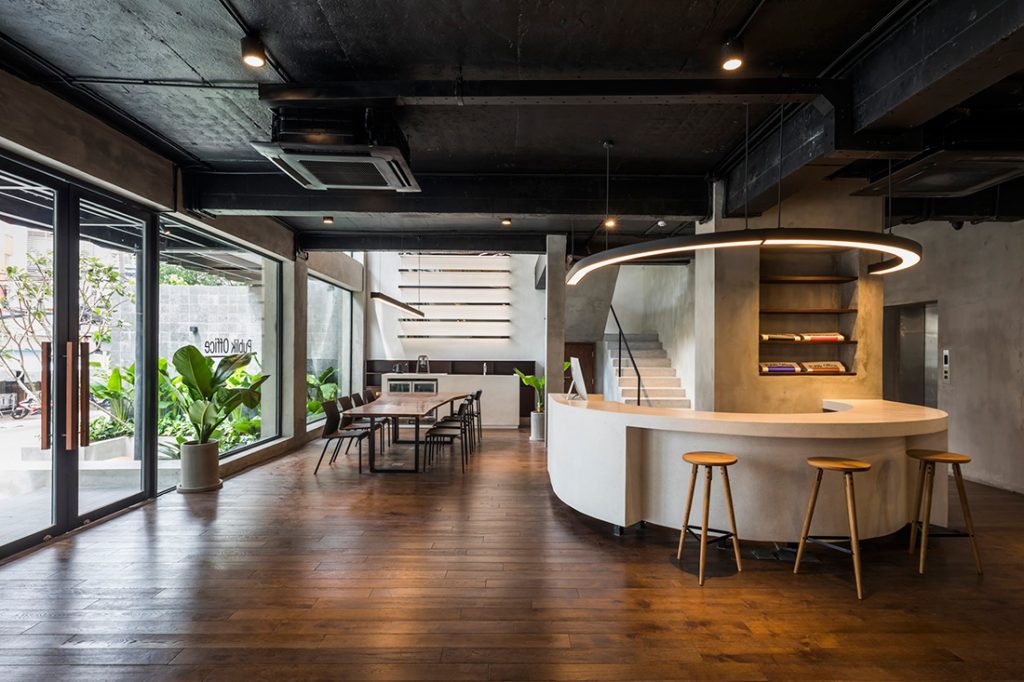 SDA’s proposal was to create a series of workspaces with different concepts and ambiences across the various floor levels. These would support a spectrum of work preferences, requirements and behaviours. The ground floor is a welcoming lounge-like area served by a cafe bar – a perfect meeting space but imaginably also ideal for those who prefer to work with some ambient noise. 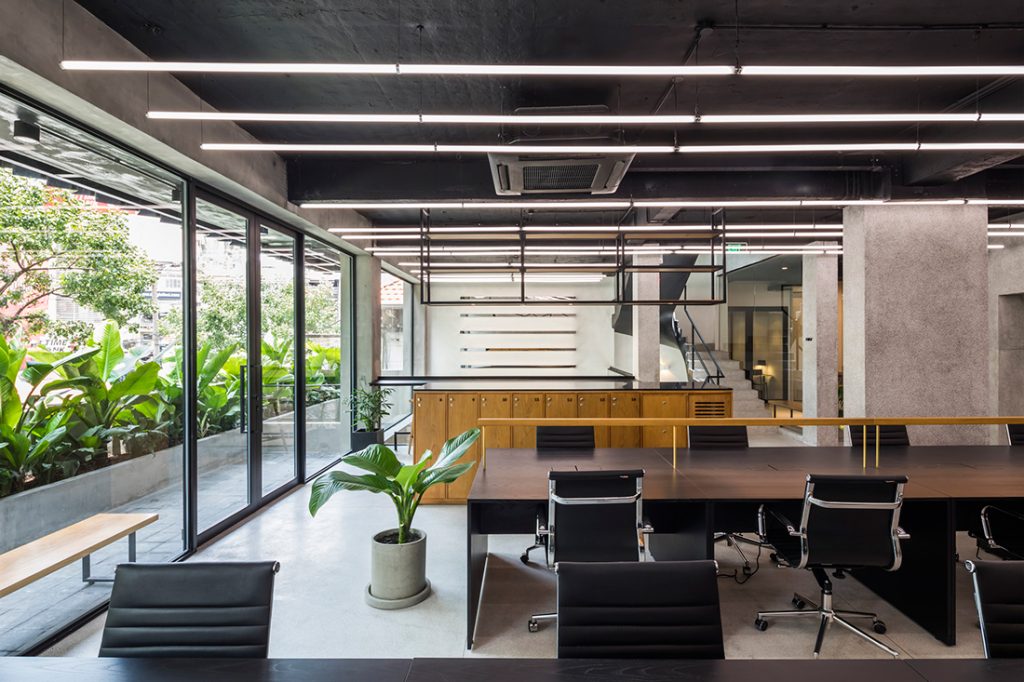 Above this is an open desk level. Another floor is fitted out with booth-type workspaces separated by movable partitions, which allow for quieter, focused work. Finally, offering most flexibility is an entire level furnished with movable desks that allow variations in layout configuration. 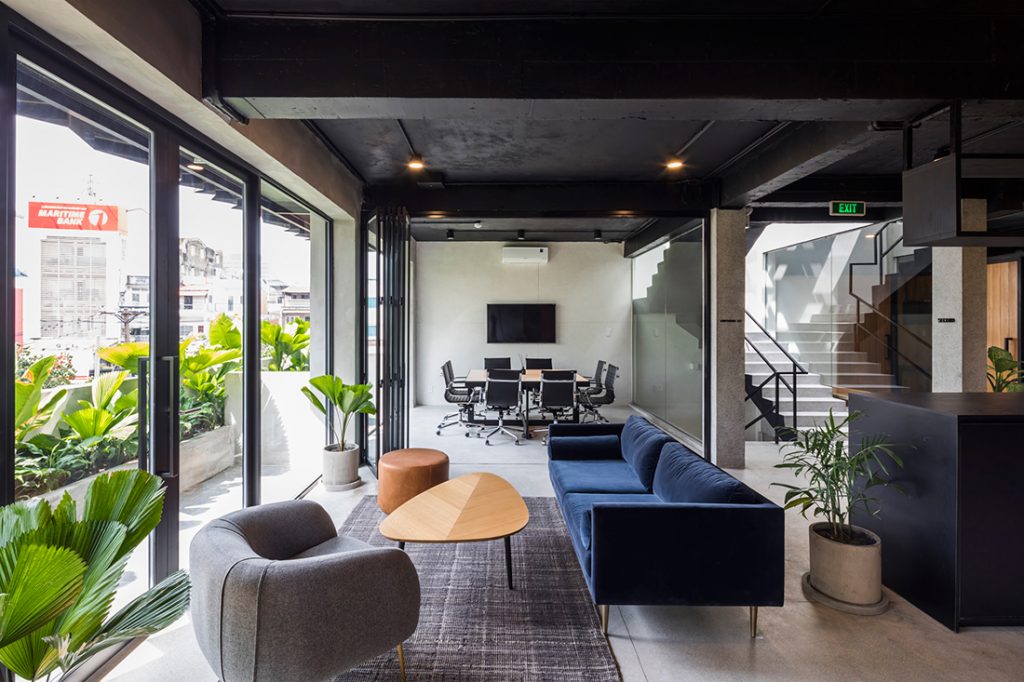 In addition to imparting a sense of freedom, the workspaces were also designed to minimise distraction with a pared down (but still warm) scheme featuring natural materials that were sourced locally. “We designed to eliminate decoration as much as possible,” says Daisuke. He emphasises what he calls “a feeling of spaces”, constituted not only of furnishings, but also of elements such as space, light, breeze and sound, as well as the activities of the building users. 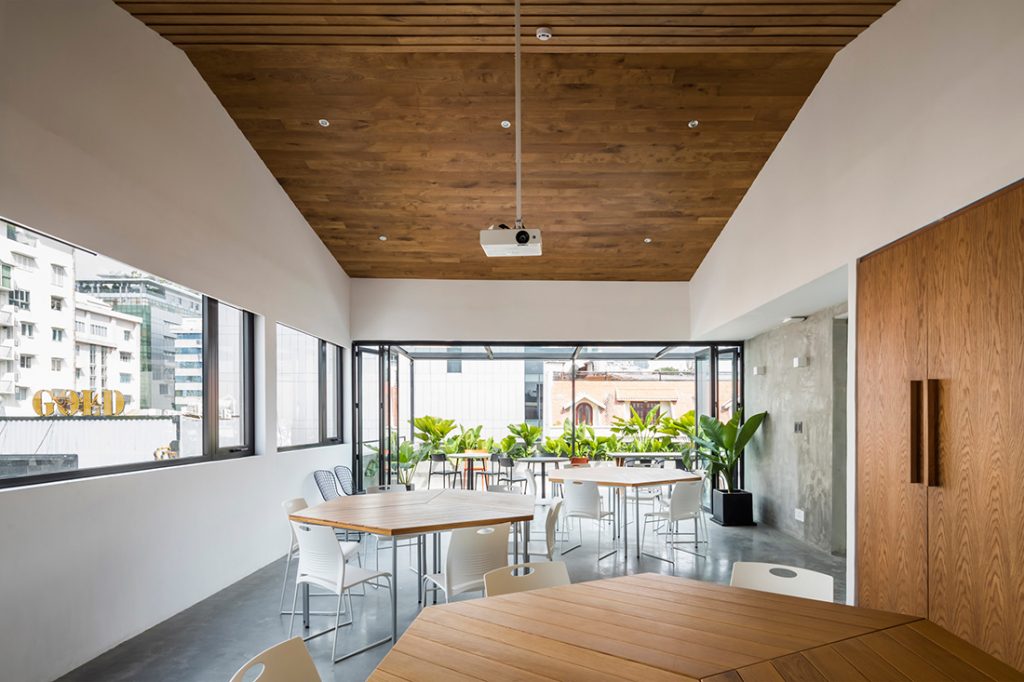 While the building allows for different moods and behaviours among its occupants, the way Publik Office behaves in its urban context is notable too. As it is housed in an old building that was originally constructed in the nineties, this was primarily a renovation project. 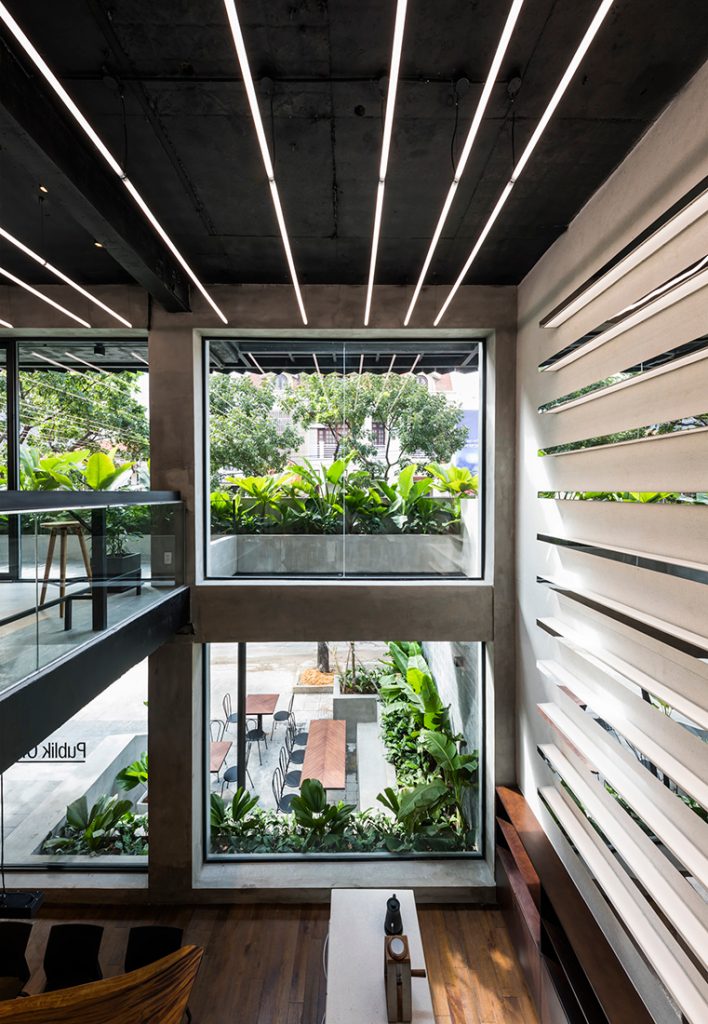 “This building had been remodelled many times,” Daisuke explains. “Because its condition was not so good, we decide to renovate almost all of it, leaving only the structural framework.” On the elevation, stainless steel sheets folded in origami-like fashion capture the changing urban environment in reflection. 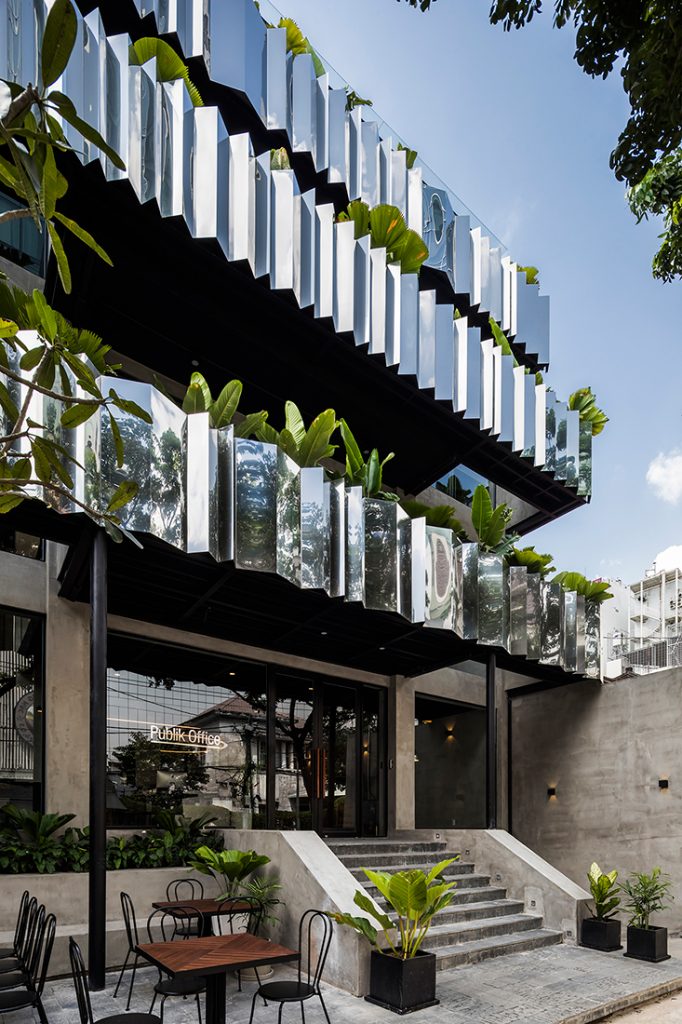 “Publik Office was not intended to serve as a closed building, but to give an intense existence, being open to the city by [being responsive] to its surroundings,” Daisuke explains. Existing balconies were also extended and fitted with planters, the foliage further giving life to the space and softening the appearance of the steel-sheet facade. 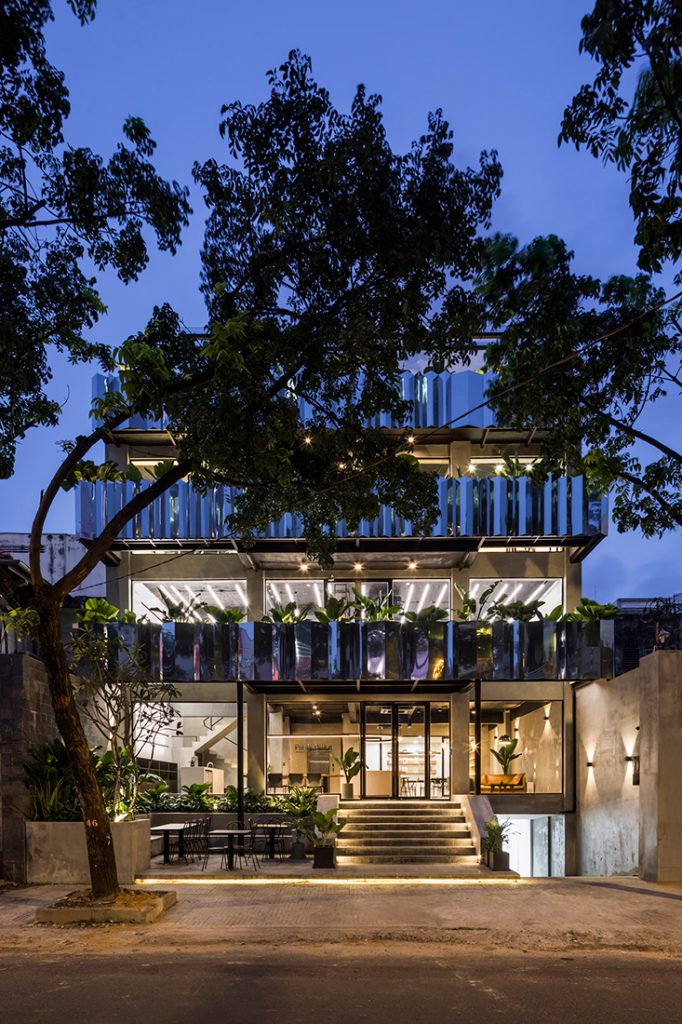 With just days left until our final entry deadline