Produce and TA.LE Make An Ode To The Glass Block

Glass blocks were used to poetic effect in this Singaporean home, achieving lyrical interest and dynamism as well as abundant natural light within.

Although glass blocks may conjure imagery of late 1980s architectural trends, their unique look and diffused light effects are still making a significant statement. Take the Glass-Block House by Singaporean studios Produce and TA.LE as an example. The project is a compelling reconstruction to an existing landed dwelling house that features glass blocks to display a bold and beautiful aesthetic.

The house was designed to maximise the land area as much as possible with an impressive triple-volume atrium internally that brings light into the house with sleeping and living areas arranged around it – much like a courtyard house. 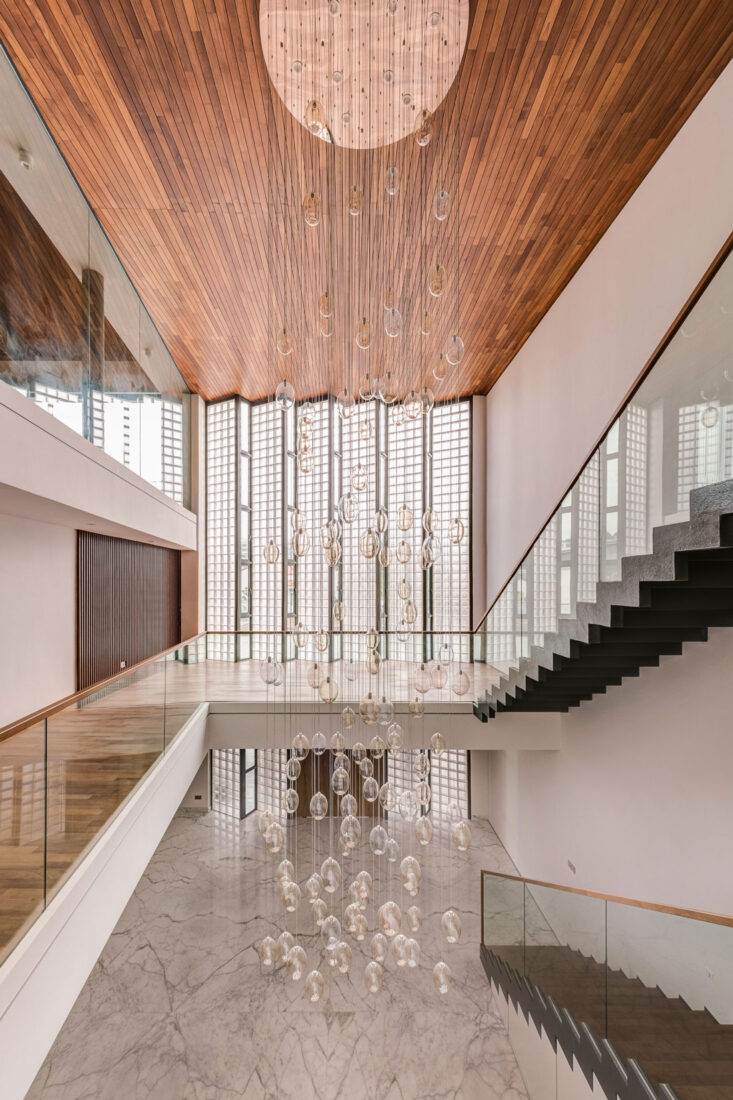 Creative Associate of Produce, Daniel Chia shares, “There is always a struggle in balancing area and the quality of space. While area is quantifiable, the quality of a space is harder to justify – especially the function of an atrium within a house.” The design team was adamant, he says, about the size of the atrium because it is the first space one encounters upon entering the house. “It prevents the other individual spaces in the house from feeling overly closed-in while connecting them at the same time,” he adds.

Externally, porosity is the keyword with regard to facade treatment. First, the gym extension at the third storey had overlooking issues due to the higher ground on the north and west sides of the house. As a result, varying aperture sizes were designed for the screen to allow views out at eye level while ensuring privacy. 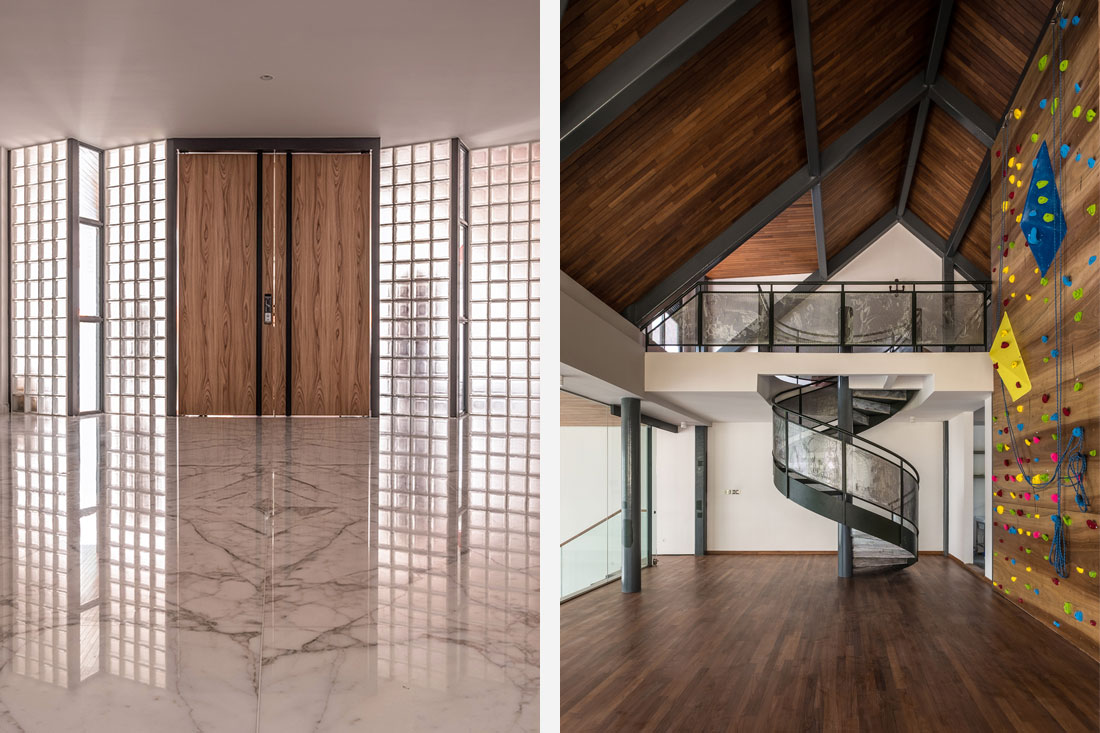 Next, the glass blocks were a response to the proximity of other houses to ensure that as much light entered the atrium as possible while not compromising privacy. The facade was also designed in a serrated fashion, alternating between glass blocks and large casement windows to achieve unobstructed airflow into the space to avoid a greenhouse effect. 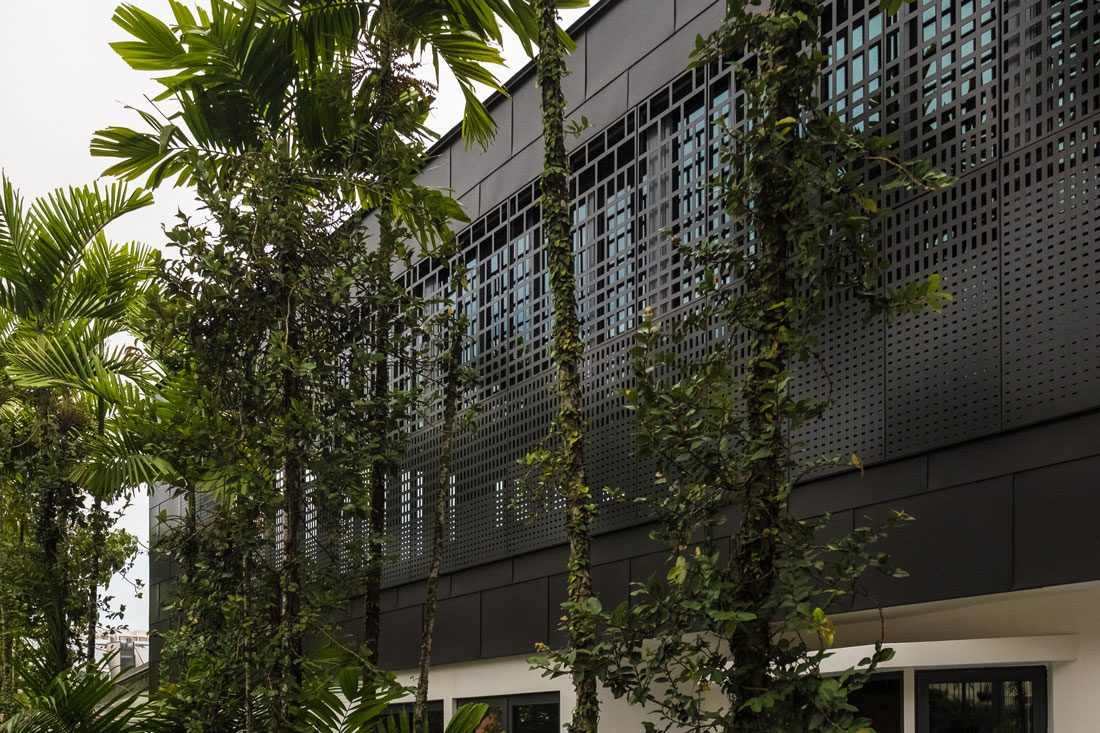 Says Chia, “The clients were surprised with the proposal, but not against it – we brought down multiple types of glass blocks for testing and they were comfortable with the frosted glass ones for their light-diffusing and heat-insulating qualities thanks to their air cavities.” The abundance of light and new steel construction painted in carbon black is complemented by the use of teak for the chamfered eaves that frame the glass-block facade.

It is refreshing to see a house employing such a courageous specification of glass block as the main facade and addressing concerns about privacy with finesse and consideration to sustainable design. The success of this project proves that glass blocks no longer simply define a bygone era of architecture but have emerged as an ambassador for contemporary design.