At Tokyo’s Kojimachi Terrace by Nendo, six of the 11 floors are prised open with landscaped terraces lined with warm timber, while the whole building is wrapped in a veil of timber. 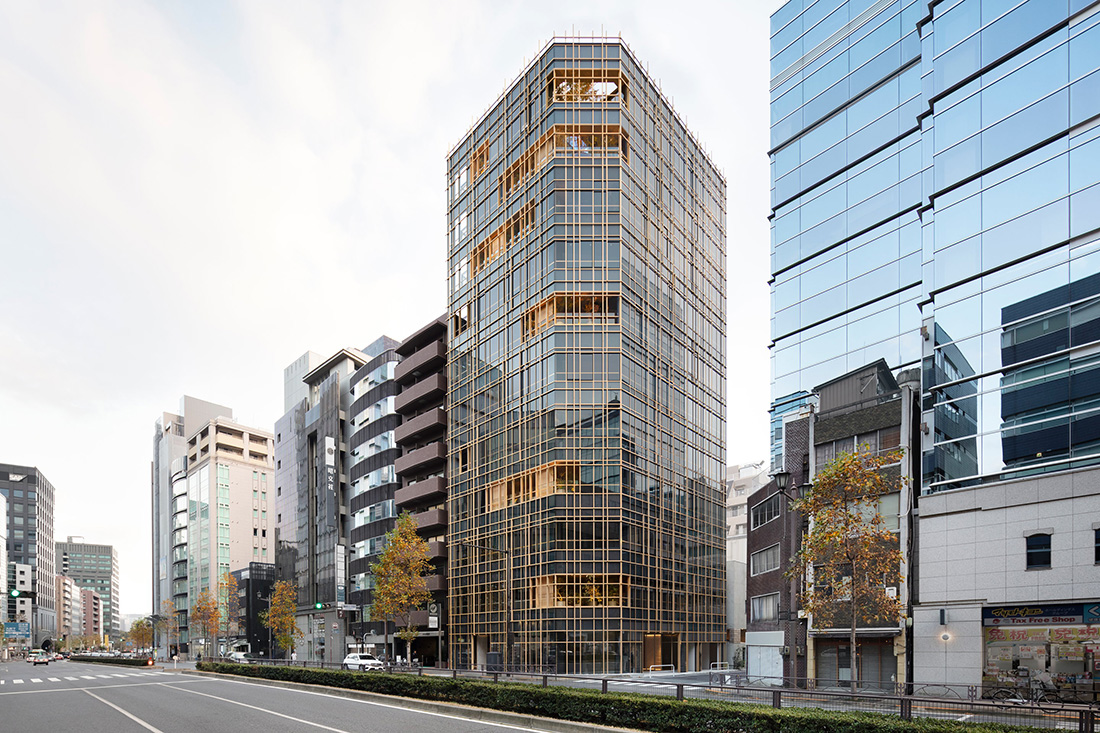 In collaboration with Ikawaya Architects, Nendo has designed an office building in Tokyo (for Yokohama Ekimae Building) that brings the outside in with large leafy balconies. Wrapped by a thin framework of timber, the eleven-story Kojimachi Terrace is set apart from its neighbours with its grid-like appearance and terraces, including a three-storey sky garden, which create more space for the building’s users. “Typical office buildings are usually built as closed ­off blocks with artificial climate control that do not share any real physical connection with their exterior environments,” explain the designers. “The external elements were taken into account to allow for a more physical experience of the outdoors, like witnessing the changing weather and yearly seasons.” The building’s light timber exo-skeleton appears golden in the sunlight. It acts as a connecting element throughout the building, jutting out from the top of the structure and extending into the entrances.

Nendo also used the facade’s design to camouflage safety railings around the many balconies. “By designing these rails and pillars to appear the same size and wooden finish as the facade, and by weaving this together into a natural looking grid, the visual noise has become integrated and camouflaged within the exterior,” says the team at Nendo. Inside, the iconic timber battens, in the same proportions as outside, run around the corridors and conceal lighting that illuminates all directions to create a warm, intimate feeling. Nendo accompanies the bars with bronze-coloured stainless steel and raw stone. The surfaces of the walls and ceilings are in hand-finished plaster, providing a natural appearance. The iconic wooden battens are featured in some of the building’s furniture and even the Kojimachi Terrace logo. To best incorporate nature into the office environment, Nendo opted to sporadically place balconies on six of the building’s 11 floors. The balconies, clad in light wood, both improve the view for those working inside and act as additional usable spaces. “Assumed to be used as exterior spaces, each terrace can easily transform into a private meeting area by closing the doors and windows concealed around it,” says Nendo. On the highest levels, a three-story “sky forest” is designed as a nature-like hideaway for employees. Trees and other vegetation creates different experiences on each level while also creating unity between one area of the building and another. The large glass windows on areas not open to balconies allow in as much daylight as possible.