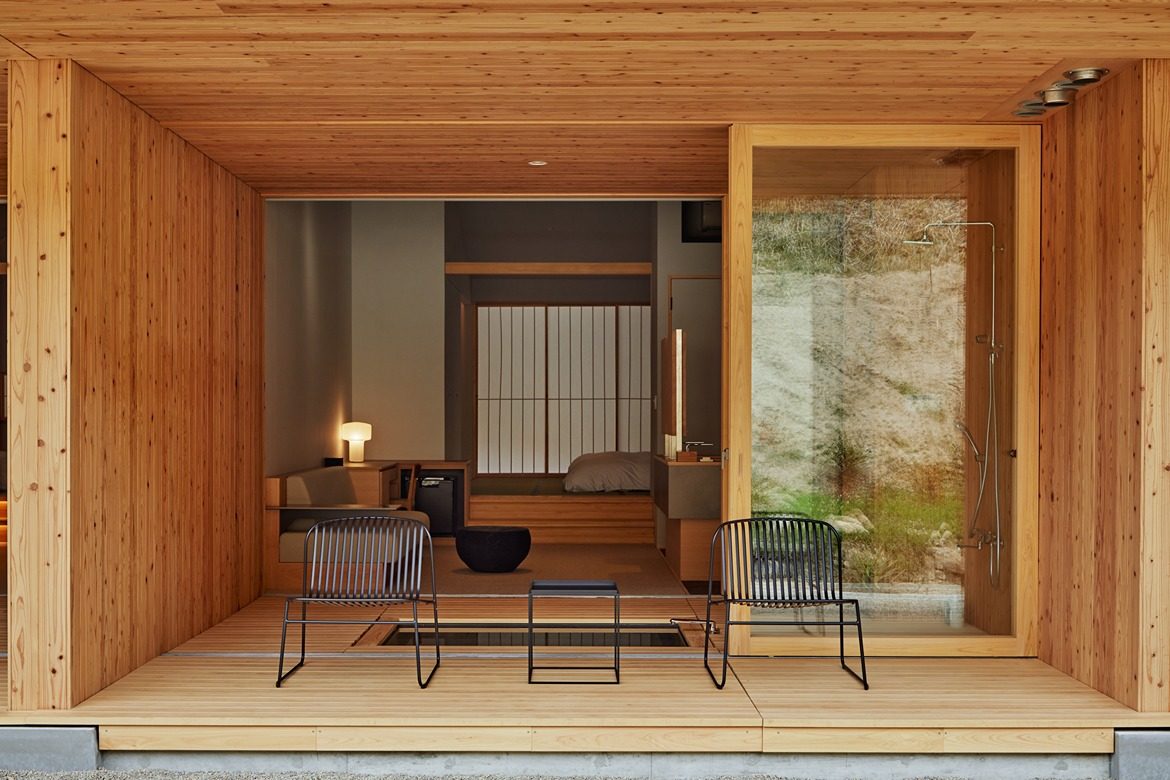 Nestled in an untouched corner of Naoshima, one of Japan’s ‘art islands’ found within Kagawa Prefecture, is a new addition to the island’s hotel facilities in the form of a modern luxury ryokan that champions the region’s abundant nature. Open in April this year, Naoshima Ryokan ROKA is designed by Okayama-based design firm Nottuo led by Kouhei Suzuki and Hironori Fujioka.

The hotel comprises two main buildings connected by a covered walkway with a central small pavilion housing a central irori sunken fire hearth. Whilst the main building comprises the hotel entrance, a cafe/bar and restaurant, the adjacent annex houses eleven spacious guest rooms, each with their own private bath. The central sunken hearth was designed to encourage new dialogues and connections amongst guests.

The ryokan, a timber-clad steel structure, was constructed on the site of a former rice field. Located in a valley flanked by mountains, Fujioka, who led the architectural design, notes that the locale created suitable conditions for growing rice fields. “The site’s positioning from east to west presents the mountains in front and behind that are not high, so there is generous sunlight in the direction of a pleasant breeze.”

Designed as a single-storey building in order to remain unobtrusive to enhance the experience with nature, the designers eliminated any unnecessary distractions. Nottuo co-founder, Suzuki, who oversaw ROKA’s branding and interior, explains, “By daring to create a blank space that is not drawn or explained, it creates a range of interpretation through contemplation, consideration, and imagination. We intentionally designed a low-rise architecture so that it blends in with the surrounding landscape, rather than having the building stand out and make a statement in its location surrounded by mountains.”

Intending to embrace the region’s abundant nature and natural resources, the Naoshima Ryokan ROKA’s exterior is covered with tsuchi-kabe earth-clad walls with timber panels made from shou-sugi-ban charred cedar. Suzuki says, “The ryokan is strongly intended to be unique to the area, using natural materials from the Seto Inland Sea such as earthen walls made of Awaji Island soil, Tosa Washi paper from Kochi, Aji stone from Kagawa, granite from Naoshima, and cedar and cypress from Okayama.’ He continues, “By using natural materials such as wood, stone, and soil, each of which has a different expression, rather than standardised industrial products, we hope that when one looks at the details, one will discover shapes and textures created by nature.’

Whilst a traditional Japanese ryokan is typically designed as a private and enclosed space, ROKA presents a modern reinterpretation with a sense of transparency and openness. Large floor-to-ceiling glass windows act as sliding doors, framing the exterior gardens and native shrubbery. Embracing nature in its design, the hotel is a sophisticated new addition to the island.