Proximity to an airport does not encourage openness of architectural form for obvious reasons. If the architecture is for inward-focused programs such as a nightclub and an indoor theme park, then the hard edge of the ‘big box’ typology is to be expected. But can a large-format facade be expressive and contextual if it has no windows?

MVRDV uses sculptural draping and imprinting strategies to prove it can be so at Paradise City – a complex of six buildings providing hotel and entertainment functions less than a kilometre away from Seoul’s Incheon Airport. 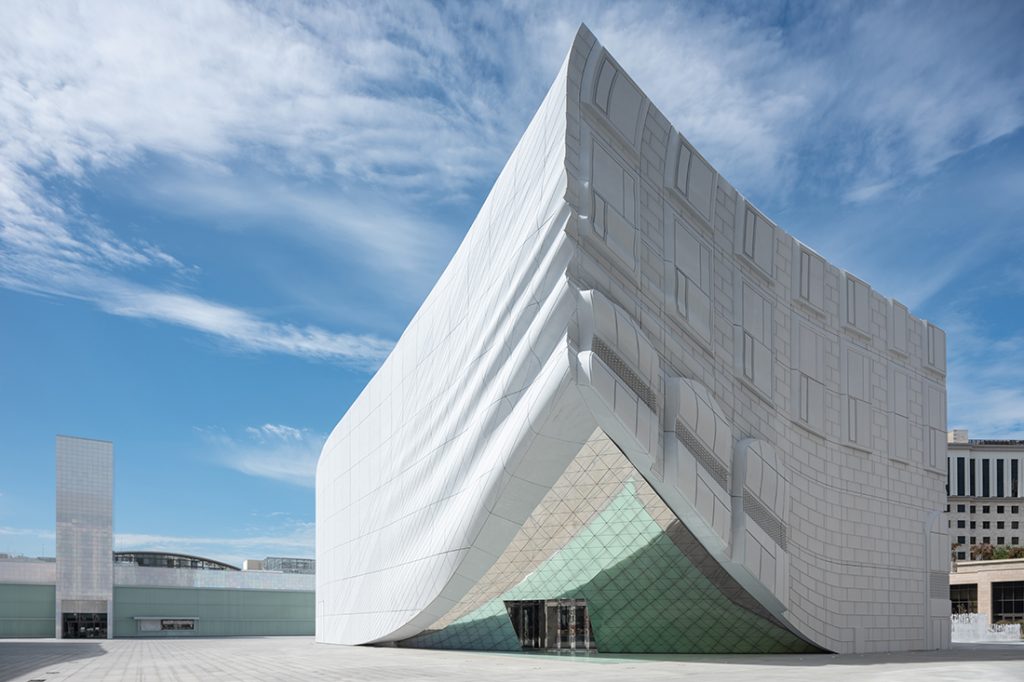 MVRDV’s design for two buildings at Paradise City, termed ‘The Imprint’, needed to satisfy the client’s request for integration with the buildings that already existing in the complex. The solution to the need for contexualisation came from the strategy of projecting the facades of the surrounding architecture and draping their likeness over the building forms like a shadow.

The new facades were ‘imprinted’ with a relief pattern and enlivened further by lifted entrances (with panels of glass-fibre-reinforced concrete [GFRC] cladding draped like textile) and gold treatment. The outcome is theatrical to say the least – indicative of the character of the activities that are to occur behind the walls. 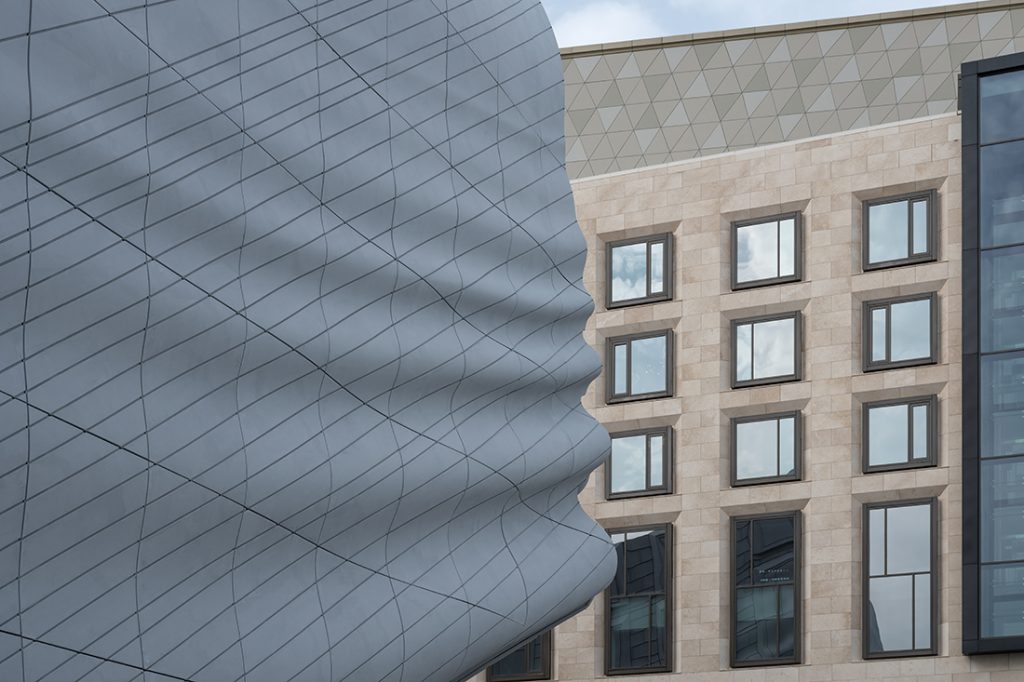 .
“Paradise City is not a collection of individual objects such as Las Vegas, but a real city.”
– Winy Maas, MVRDV
.

Says Winy Maas, Principal and Co-founder of MVRDV, “Two months ago most of the cladding was done and the client said, ‘This is an art piece.’ What is interesting about that is that they are looking for that momentum – that entertainment can become art o that the building can become artistic in that way. What, then, is the difference between architecture and art? The project plays with that and I think that abstraction is part of it, but it has to surprise, seduce and it has to calm down.” 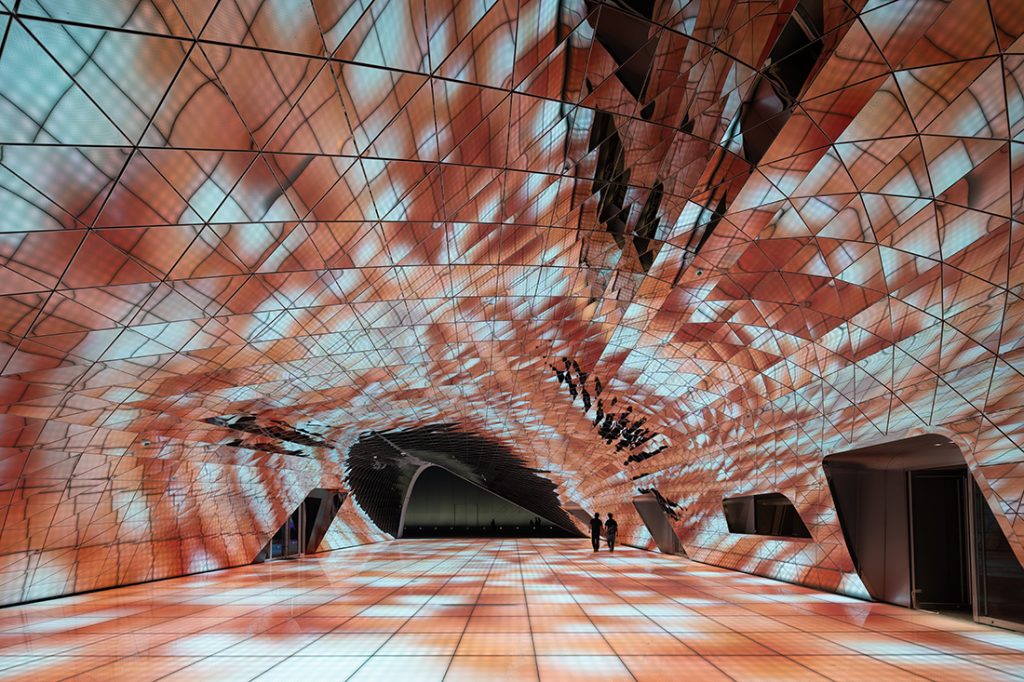 MVRDV worked with co-architect GANSAM Architects and Partners of South Korea on the project, as well as façade consultant VS-A Group and panelisation consultant WITHWORKS. Techwall assisted with the GFRC panels, as many of 3,869 of which are unique. Moulds were individually produced using MVRDV’s 3D modelling files. They were (mostly) painted white after installation to emphasise the relief in the design. At the points where the facades are lifted to create entrances, mirrored ceilings and glass media floors create excitement that builds on the expectation of an impactful entertainment experience to come. The lighting was designed by L’Observatoire International.

.
“Giorgio de Chirico would have liked to paint it, I think.”
– Winy Maas, MVRDV
.

“With our design,” says Maas, “after the nightly escapades, a zen-like silence follows during the day, providing an almost literally reflective situation for the after parties. Giorgio de Chirico would have liked to paint it, I think.” 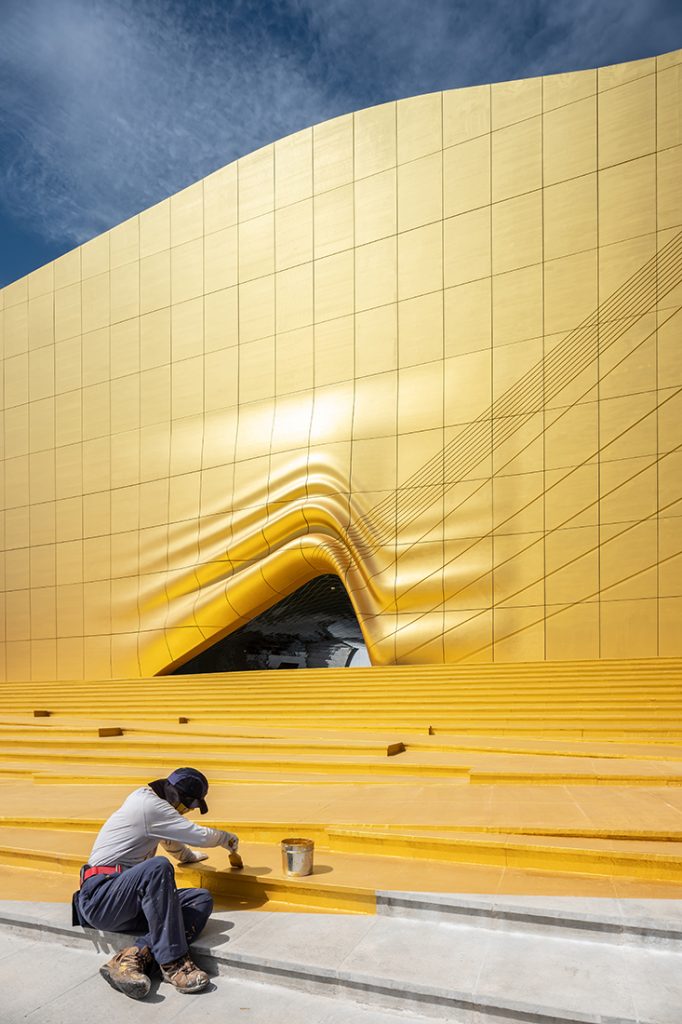