The Instagrammable Beta Cinema breaks away from traditional cinema design

A trip to the cinema in Ho Chi Minh City is not just a matter of viewing the latest blockbuster these days. There is also the chance to enjoy the cinema itself – through a design that takes colour and landmark references to another level entirely. 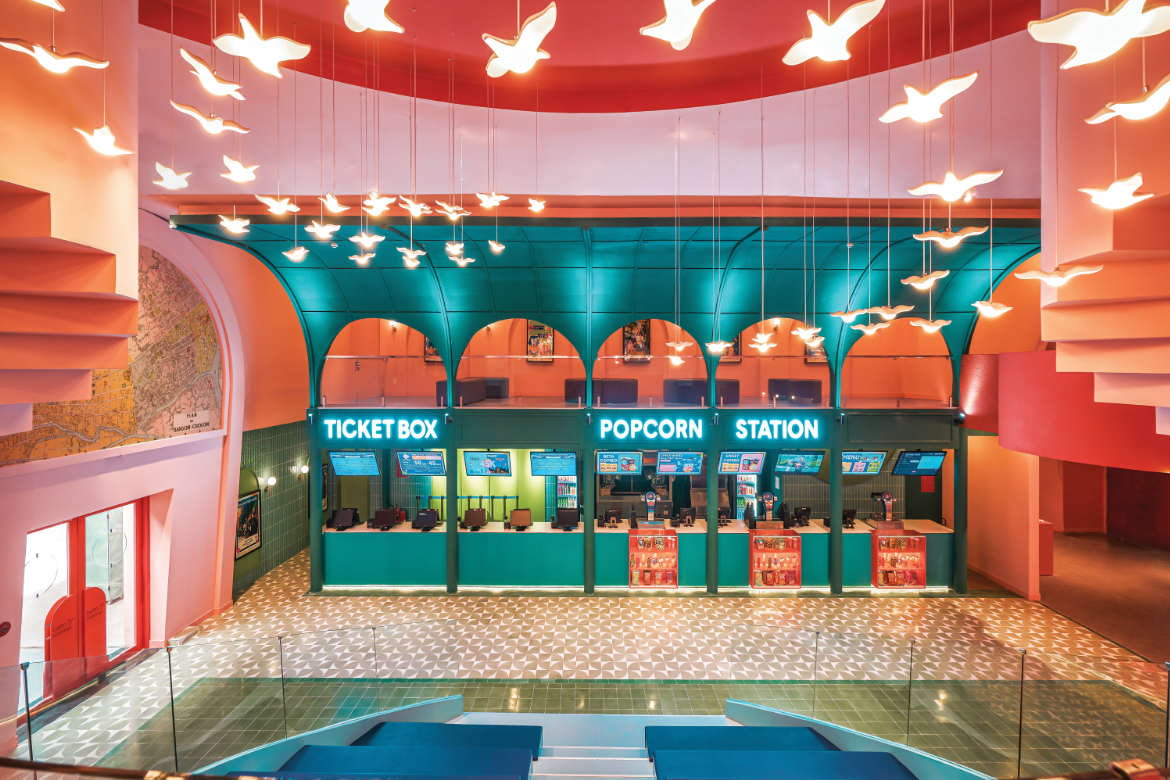 In an age of Netflix parties and Instagram Lives, where our social interactions are lived out bi-focally in both the physical and digital domains, Module K has designed a 1000-seater Beta Cinema in Vietnam, Ho Chi Minh City that fully embraces this duality. Enter the bubblegum pink universe — a collage of smooth arches and concave recesses in cheery Pantone shades melding into tactile surfaces that entice you to touch, pose and snap.

How would one design a cinema today? To what extent should it reflect the contemporary blur between virtual and reality, digital and tangible? Programmatically it makes sense to do so, since to watch a movie at the cinema is to be transported out of one’s reality to inhabit another’s for a few hours — and for the experience to be as reality-suspending and immersive as possible.

Drawing from a variety of iconic Vietnamese landmarks in building their mood board, the designers at Module K abstracted them into basic geometric shapes, and iterated multiple times before landing on the five landmarks that sat well together within the space.

Module K clinched the win in a design competition against 30 other firms with their iteration – a visual and sensory immersion that begins not just at the roll of the reel, but at the doorstep. To ground their designed fantasy world in its place of origin, the team referenced the geometries of iconic Vietnamese architectural landmarks.

Jade Nguyen, Module K’s director notes, “The client wanted to convey a message of pride in Saigon landmarks, but not in the usual Indochine style. We wanted to move away from the typical cinema design – dark and moody – so we tried to create a funky and welcoming space with locations for connecting, eating and drinking pre- and post-film showings.”

Traversing Beta Cinema is like an eclectic journey through time in Ho Chi Minh City, beginning with the Ben Thanh market tower at the main entrance with its symmetrical staircases, and the rhythmic arches of the Saigon Central post office, rendered in aqua to house the ticket counters. An array of alternating arches along the hallway corridors captures the intimate granularity of street alleys in Ho Chi Minh City. Asymmetrical arch pillars on the right side of the space are doused in pink, in reference to the rose-coloured Gothic style of the iconic Tan Dinh Church. Pastel pink staircases wrap themselves around bold columns, their stepped forms repeated in balustrades.

“We wanted to create an Instagrammable moment, a buzz, a wow feeling for Gen Z to tell their friends to come and check out the design and remember the name.”

The elliptical outline of the central seating area was abstracted from the Saigon Municipal Opera House, clad in hues of navy – a nod to the client’s (Beta Media) logo. Overhead, just beneath the Indochine green vaulted ceiling, a flock of pigeons ‘fly’ in a graceful arc – a nod to the familiar sight for locals at the Paris Commune Square.

Around the mezzanine waiting area, colourful circular seating modules resembling chewable gummies dot the space. Even the mundane social routines of meeting up with friends before the movie and waiting are transformed into moments of imagination and play. Many visitors take up the invitation in such a photogenic space, snapping pictures and selfies for the record, while interacting with the spatial details to identify their national architectural icons. Within the cinemas, eye-catching lozenge-shaped wall reliefs in citrus orange and lemon yellow are backlit, alternately patterning the walls in their vibrant glow, contrasting the deep turquoise coloured seating.

Drawing from a variety of iconic Vietnamese landmarks in building their mood board, the designers at Module K abstracted them into basic geometric shapes, and iterated multiple times before landing on the five landmarks that sat well together within the space. The goal was to give the audience a strikingly new destination for movie watching, with a distinct Saigon vibe that felt dynamic and bustling. “We wanted to create an Instagrammable moment, a buzz, a wow feeling for Gen Z to tell their friends to come and check out the design and remember the name,” reveals Nguyen.

For those of us accustomed to the darkened and sometimes grimy interiors of cinema halls, a space like this subverts expectations. The show itself is not the sole event; the entire journey of gathering for a few hours of sensory travel from start to end is celebrated as a social ritual. Currently, Instagram is awash with hyper-realistic cinematic renders by skilled visual animators that beg the question: is this real? Physical places like Beta Cinema approach the fuzzy boundary in the opposite direction with animated environments that look like renderings. The Module K design team skilfully employed bold swathes of colour, which has a flattening effect on visual depth, making spaces look two-dimensional and slightly surreal.

The result? An eclectic universe of playful shapes and pop colour abstractions that tell a story of the city’s history projected into the modern epoch. Passing through the atrium, locals and foreigners alike take joy in identifying familiar anchors within the new. Placemaking is a smorgasbord of mental associations, shared in common by a group of people. It is often a result of repeated visits, routes and gatherings, which leads to familiarisation with place anchors. Time will tell if over time, the Beta Cinema acquires its own history as part of the city’s social narrative. Judging from the buzz on social media, the signs are promising.

Photography by Do Sy