Patrons can escape from the cacophony of Hong Kong’s bustling streets at Fukuro, which offers the intimacy of traditional izakayas but with a modern twist.

Down sloping Elgin Street in Central, Hong Kong, a facade clad in a grid of timber and raw blackened steel beckons mysteriously. This is Fukuro, an izakaya by the Black Sheep Restaurants hospitality group that has been churning out quality, stylish eateries one after another.

Here, multidisciplinary design studio A Work Of Substance eschews an open frontage for one that draws crowds with enigma. The only sign of the eatery’s happenings is the warm ambient light emanating from timber-screen panels set within the raw walls. 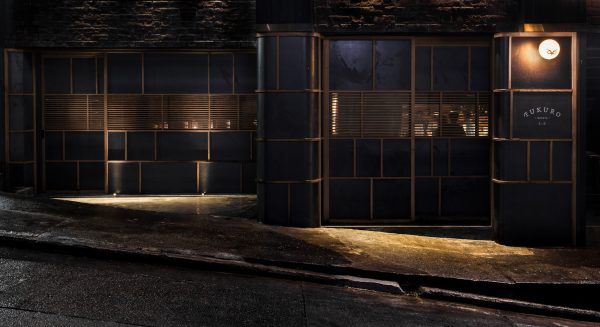 This facade is reflective of the interior, which has all the inviting elements of a traditional Japanese izakaya but with subtle twists – similar to the inventive cuisine featuring the likes of yaki udon sautéed in crab miso sauce and salmon sashimi cured in sakura flower. 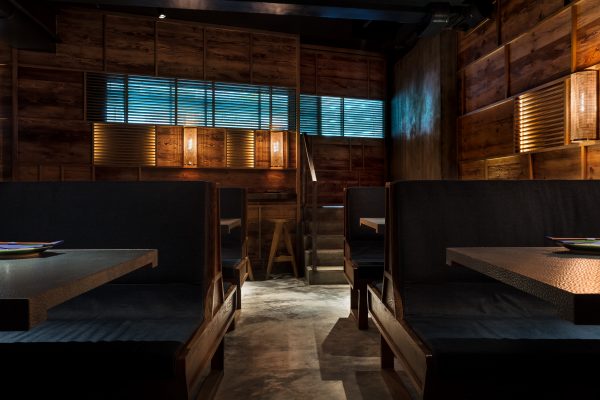 Pushing aside sliding doors, guests take several steps down into a semi-basement space with pinewood cladding the walls all around. Warm light shines through the occasional panel screened in timber just like the facade, while underfoot is the tactility of moss-green concrete. 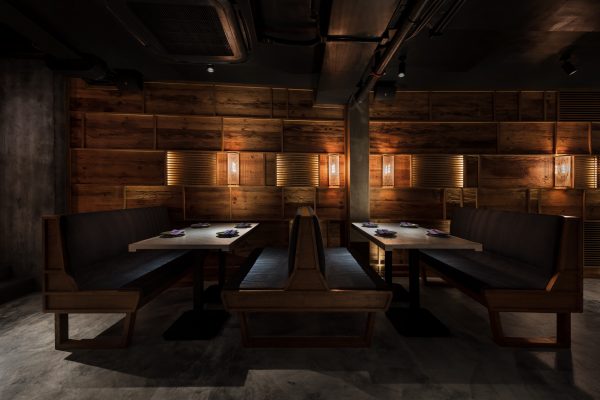 Covering the banquette seats are indigo-dyed denim with stitching details typically found on apparel, and a timber-grid drip tray sits atop a curved marble bar counter, whose elegant veins project a sense of movement. 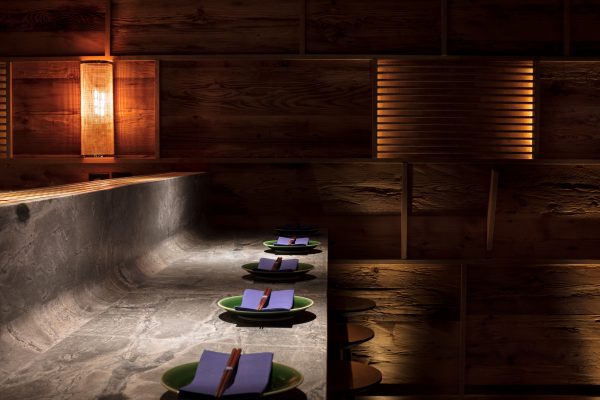 There is a mixture of bar counter seating – placed at dining height so as to welcome guests to partake in the theatrics of the kitchen – and banquette seating matched with hammered metal surfaced tables. On the walls, the curvy lighting scones in rattan lend a contrasting softness. 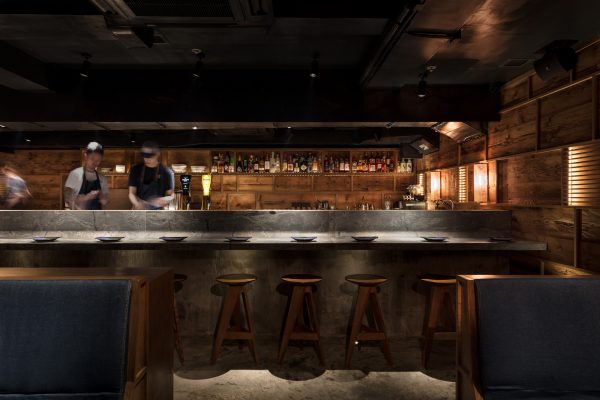 “Fukuro is built on the traditional Japanese izakaya – a watering hole for tired salarymen to unwind and let loose,” says Maxime Dautresme, the founder and Creative Director of A Work Of Substance.

He continues, “Instead of replicating the actual restaurants, we wanted to capture the unique atmosphere that resides in them and bring it to Hong Kong. Elements from lighting, to furniture, to the deep hues simply played into building the intimacy and vibrancy of izakayas, whilst the moss-green concrete brings something new to the exposed raw concrete we commonly see today,” he says of the medley of elements that evokes an izakaya spirit. 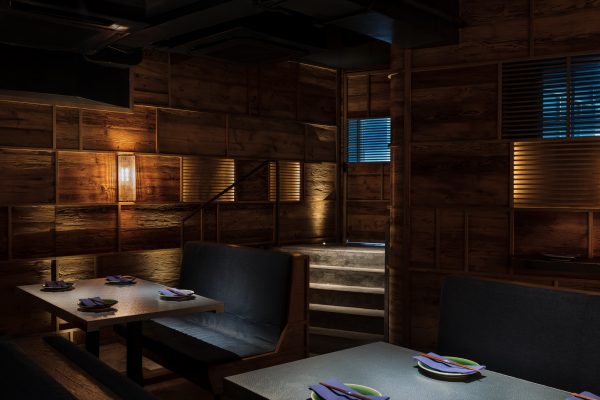 The inviting result is a far cry from the original setting Dautresme was given – a basement with a column in the middle, with a minuscule amount of natural light. The bunker-like space turned out to be advantageous, he adds, “as Japanese izakayas are usually in alleys and have that dark but intimate ambience.” 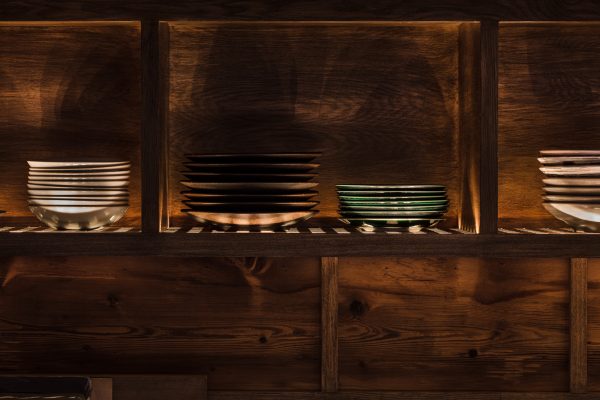 The intimacy, accentuated by the cocooning effect of the timber shell, allows patrons to be “detached from the real world and lose track of time,” Dautresme describes. Shut off from the boisterous streets within this cosy shell, revelling in conversation and fine food, it’s tempting to linger deep into the night just like the creature of the night (Fukuro means ‘owl’ in Japanese) the restaurant is named after.