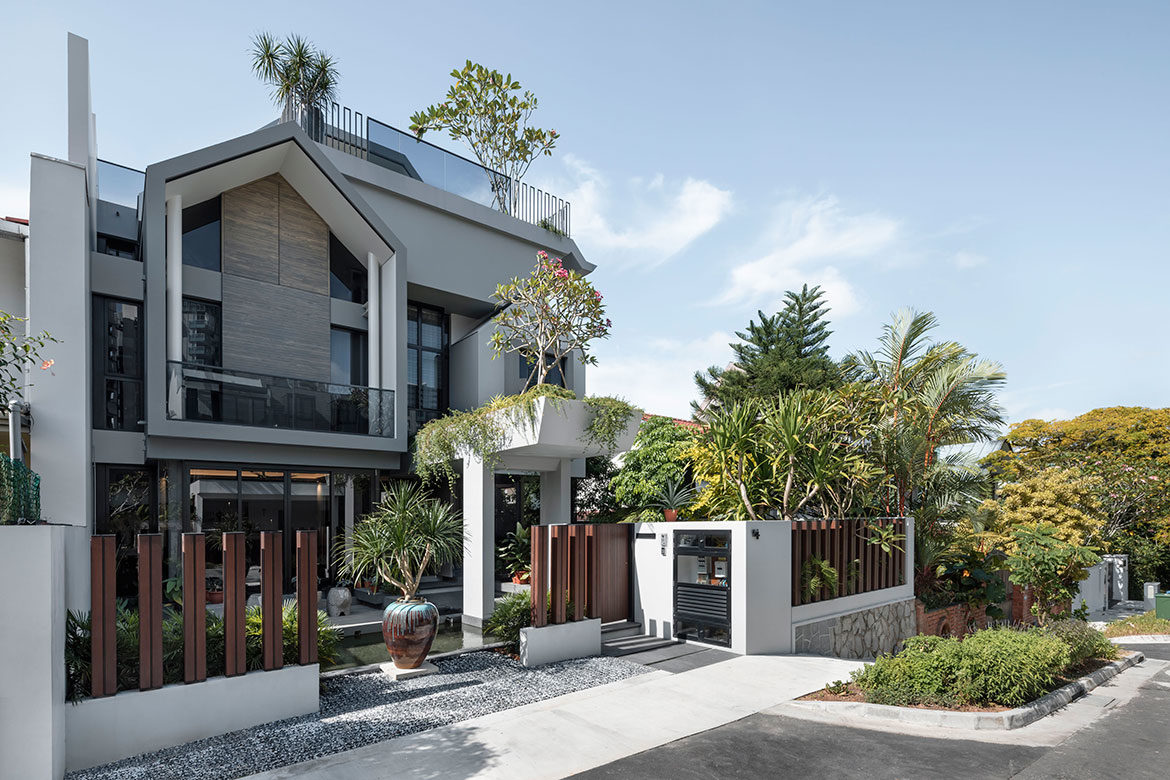 The House at Jalan Seruling greets its inhabitants with an interplay of protruding façade that employs the archetypal A-line roof form to great success. The inversed angles allow activities to emerge side by side without the necessary partitioning of a vertical wall to define each space and ensure maximum space utilisation – both indoors and outdoors. While the external form is derived from the microcosm of the inhabitants’ activities, the spatial design is derived from a choreography of activities.

Home to owners of a landscaping company and a garden spa, and their teenage daughter, the ideation of the 420-square-metre house reflects the habits and idiosyncrasies of its inhabitants. Taking the owner’s love for nature and water life as a starting point, May Anne Lee, principal architect of MAKK Architects explored provisions of seamless pockets of greens and the koi pond.

Contemporising the notion of Laugier’s ‘primitive hut’ as the basis for dwelling, the House at Jalan Seruling celebrates the archetype of a home integrated with nature. Characterised by the spatial interplay of lightness, porosity and permeability of view, light, water and air, the interior is composed of a constellation of spaces of differing functions. Apart from the usual private and public spaces of a home, the semi-detached also houses a steam room, a meditation-cum-yoga room, a bar and a basement entertainment den.

As one traverses from one space to another, there is often a varying relationship between the inhabitant and the environment. The relationship between the space, the residents and the natural environments form an evolving ecosystem where the blurred boundaries between the interior and exterior allow both to inform one another. The volume of the enclosure coalesces with gaps and varying voids that connect to other levels. Thus, “each activity is given a volume that can be visually recognisable as a place in space,” Lee explains.

Generally, Lee sees each ‘function’ of the dwelling as an activity rather than a space first. “An activity has a more dynamic outcome whilst a space without the activity preceding it, is nothing but a static volume,” she describes.

The integration of structure, activity and language of the architecture is a result of a design thinking process that led toward an emotive outcome, ultimately offering a transient environment beyond the ocular. When designing the pool, for instance, two questions has been posed. Firstly, how to merge the pool activity with the architecture so it can develop its unique design language. Secondly, how to make use of the body of water to perform a caustic dance into the interior void of the house, hence pushing the natural environment farther into the interior.

Interlocking volumes became the resultant language of the façade. In between these volumes, the gaps and voids of daylight seeping into the interior of the house allow air and wind to move freely through them, defining its architectural being.

“When interior architectural space is allowed to respond and react with its exterior envelope and juxtaposition of volumes,” says Lee, “there will be a ‘conversation’ between spaces, regardless of which level the spaces are on.”

Similarly, the client describes that “the house is not meant for secrets to be spoken in the common spaces” as architectural spaces and volumes are envisaged as discrete parts with gaps of light either from above, sides or just mere overlooking into or up to the different levels to promote as much cross ventilation and visual/audio connection within the house. The design approach that Lee employed not only encourages connectivity between human and space, but also imparts a humanistic quality to the house.

We think you might also like Open Sesame! A Home With An Unconventional Screen By MAKK Architects