Designed by via architecture, perfume house La Maison Goutal’s first boutique in Hong Kong is a graceful ode to the brand’s legacy and its founder. 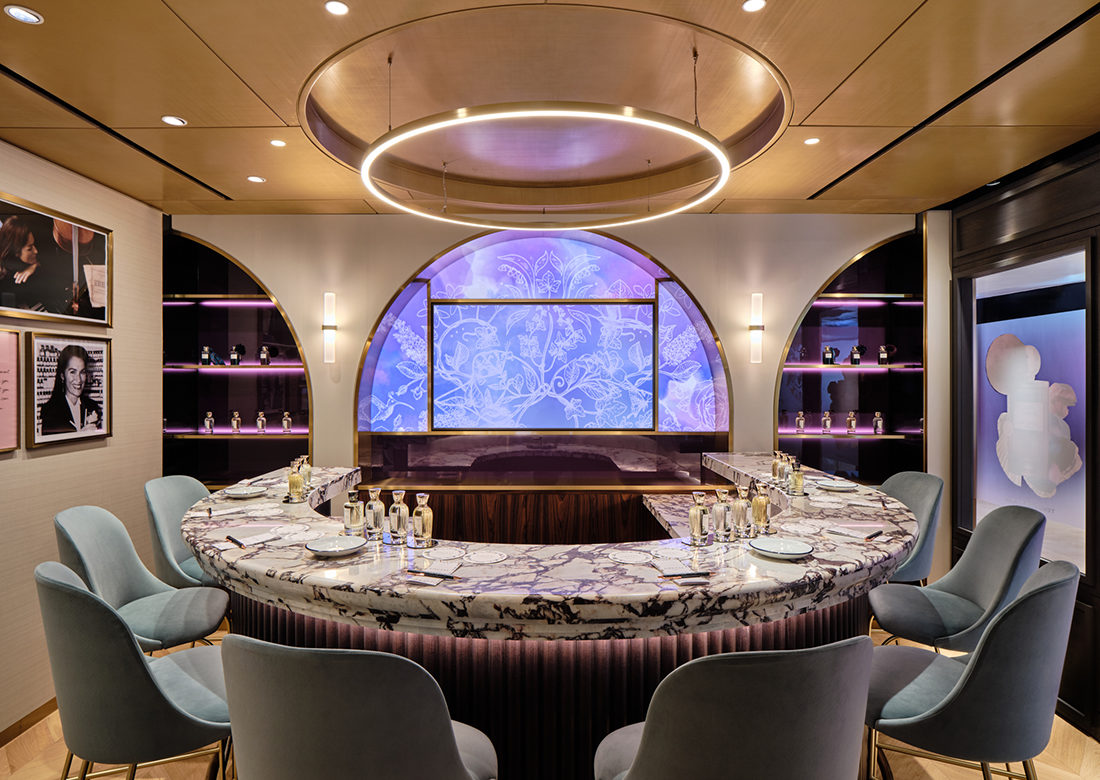 On Causeway Bay’s Paterson Street stand several soaring golden arches. These are not the arches of that well-known fast food joint: these graceful arches serve as a distinctive storefront for the Asia flagship boutique of French perfumery La Maison Goutal. 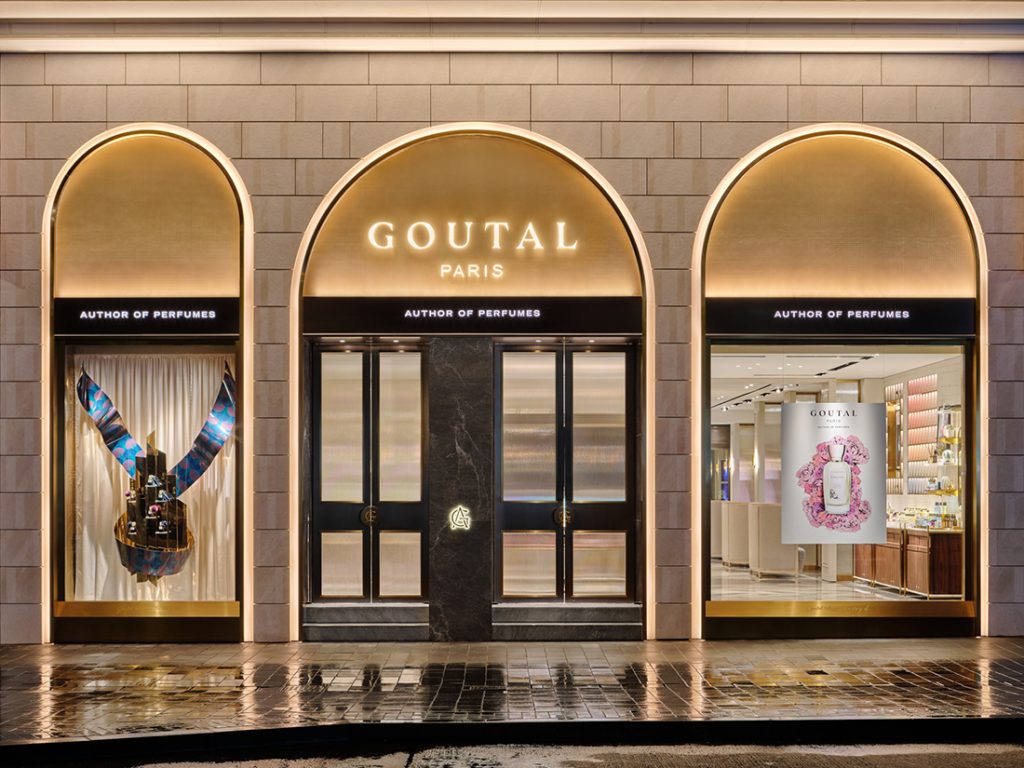 “We wanted to create this iconic, memorable picture of a retail store even from the street,” says Frank Leung, founder of via architecture, the design studio behind the fragrance house’s newest space – and its largest one, too, at 3,000 square feet. 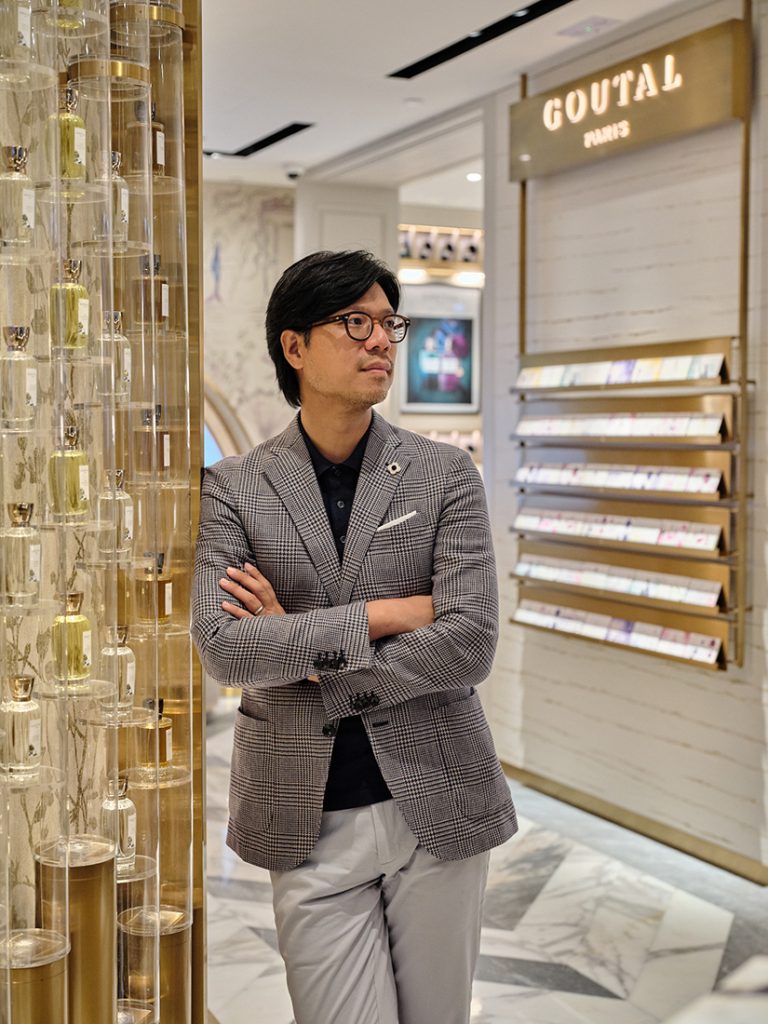 Frank Leung, founder of via architecture

“The Paris store is really boutique and it’s an enveloping kind of space. Here, we are able to expand on a lot of the house languages,” says Leung. “And we were able to add some elements to introduce it to Asian customers and visiting customers.” 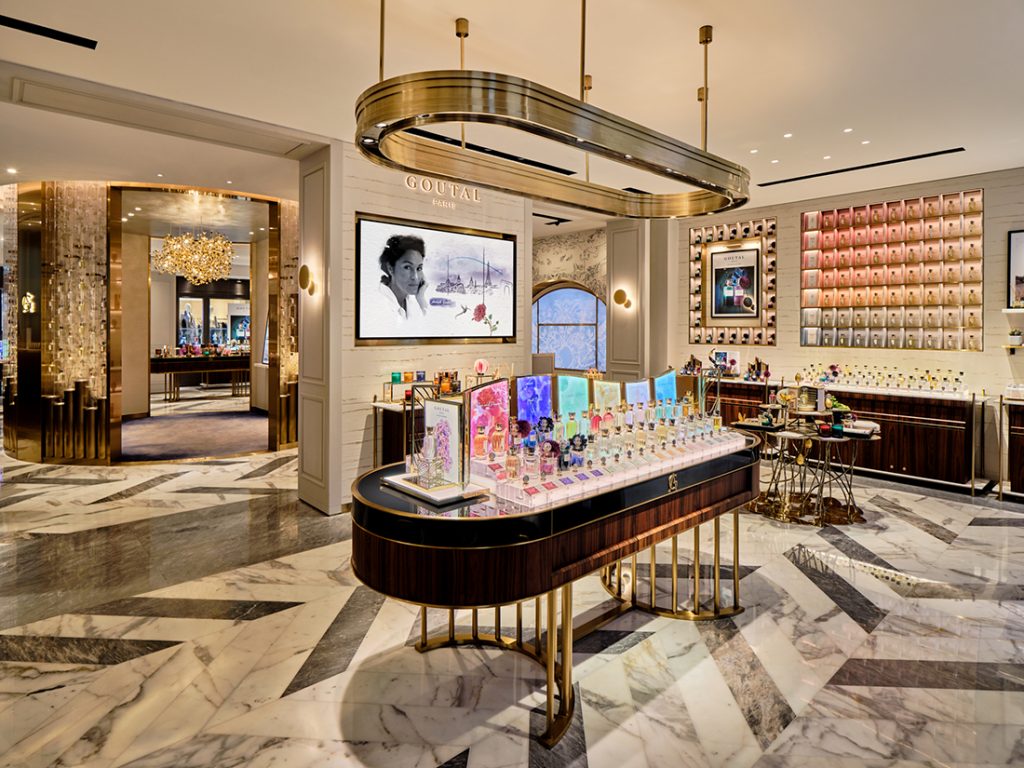 As the biggest of La Maison Goutal’s stores and its Asia flagship, this was an exciting project for via architecture. It also comes on the eve of a major milestone for the multidisciplinary design studio. “To mark our tenth anniversary this year with the completion of this flagship also makes it particularly memorable for us,” says Leung. 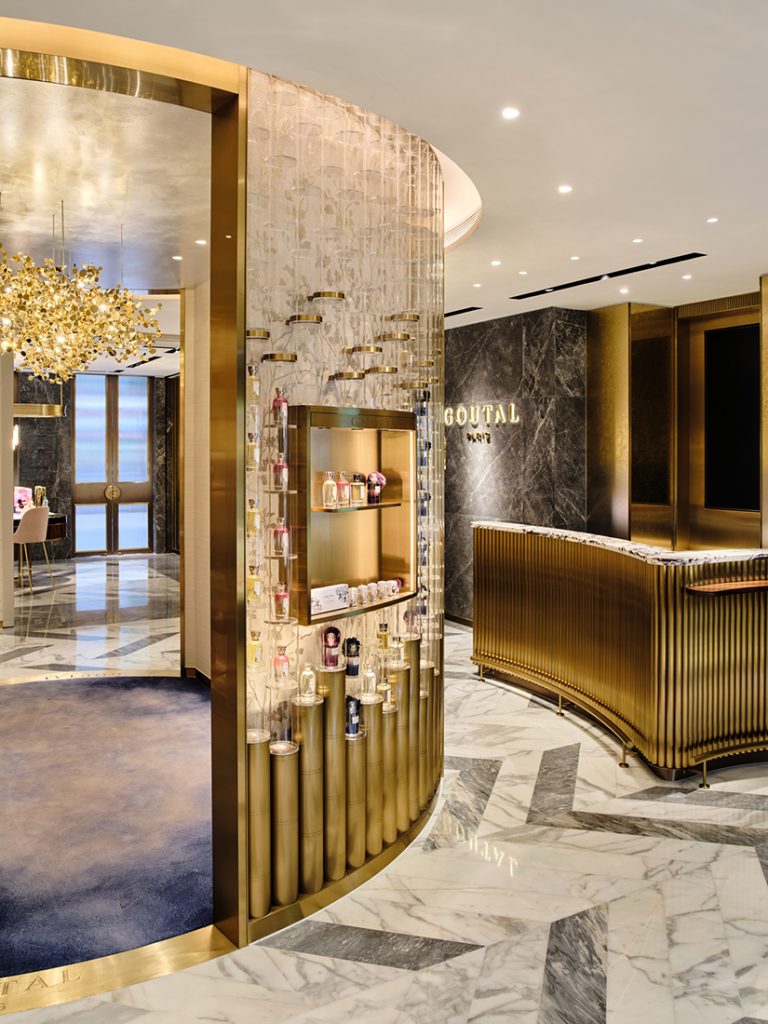 Also special was working with the legacy of Annick Goutal, the pianist and model who discovered her ‘nose’ and her gift for creating scents when she was helping a friend launch a plant-based skincare brand. She retrained as a perfumer and started La Maison Goutal in 1979, launching Eau d’Hadrien in 1981 – a perfume that is still worn by men and women the world over. 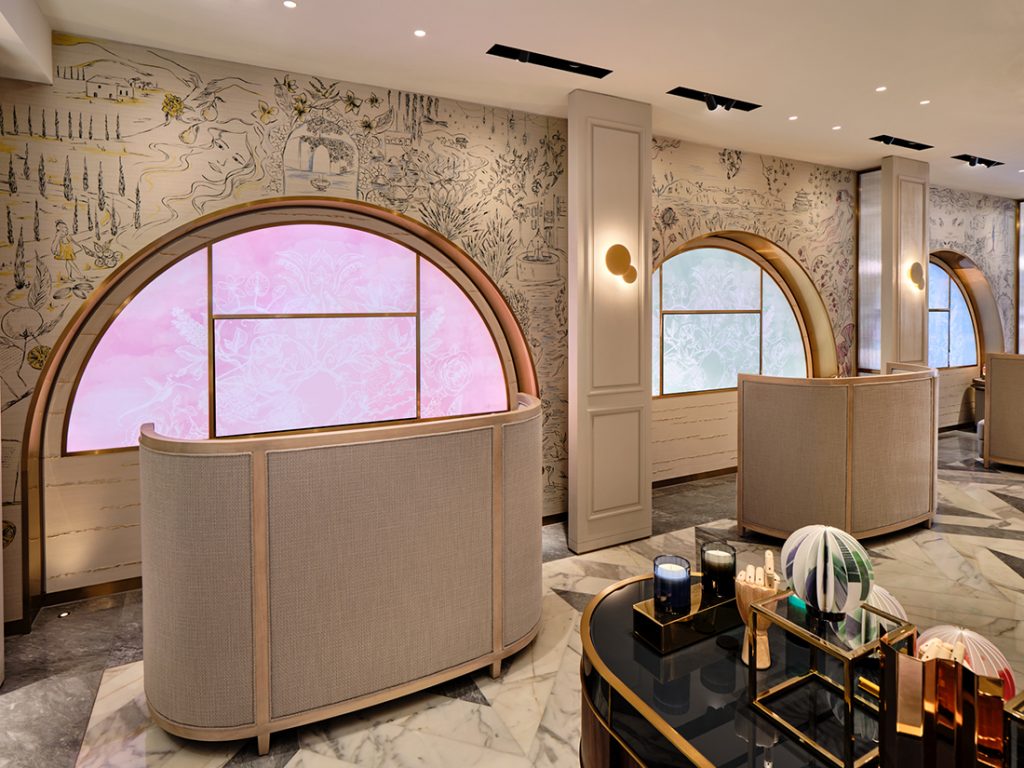 “Before we were able to design the store, we had to go through an immersive learning process. I personally was very touched by the character of Annick Goutal. She was adventurous and a very humble and modern woman,” says Leung. “As a person, she really embodied a mixture of boldness and delicate emotion, and she injected this into her brand.” 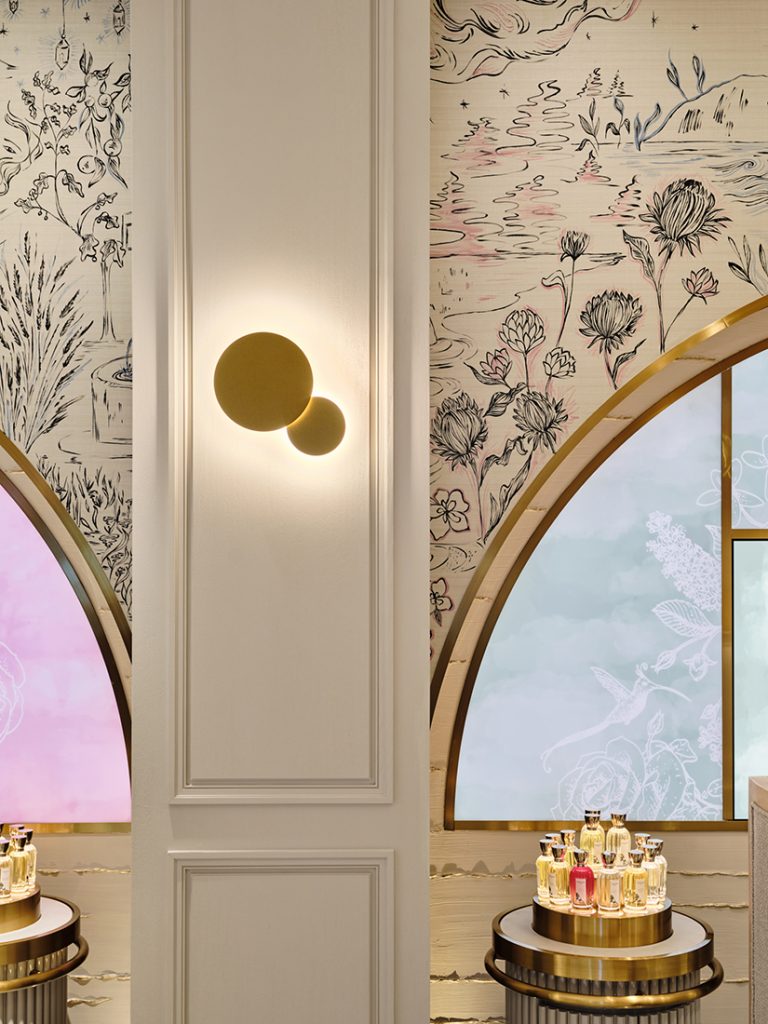 This comes through in the store Leung and his team created, which juxtaposes curves and lines, black and white marble floors and gold elements with hand-painted murals by Ophelia Jacarini and soft touches of rose for a space that’s striking, sexy and ethereal all at once. 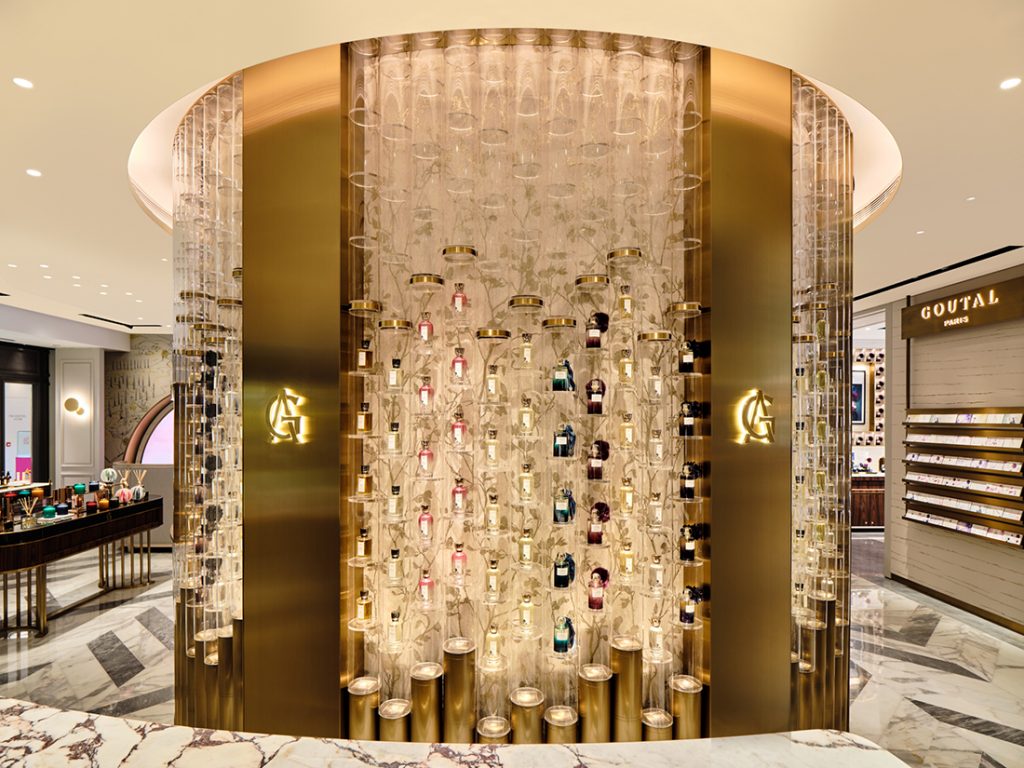 At the centre of the store is the Perfume Organ, a cylindrical space that takes inspiration from the Organ in the Paris store, flipping it so that the cylindrical organ elements sit on the outside, while also referencing Chinese bamboo. 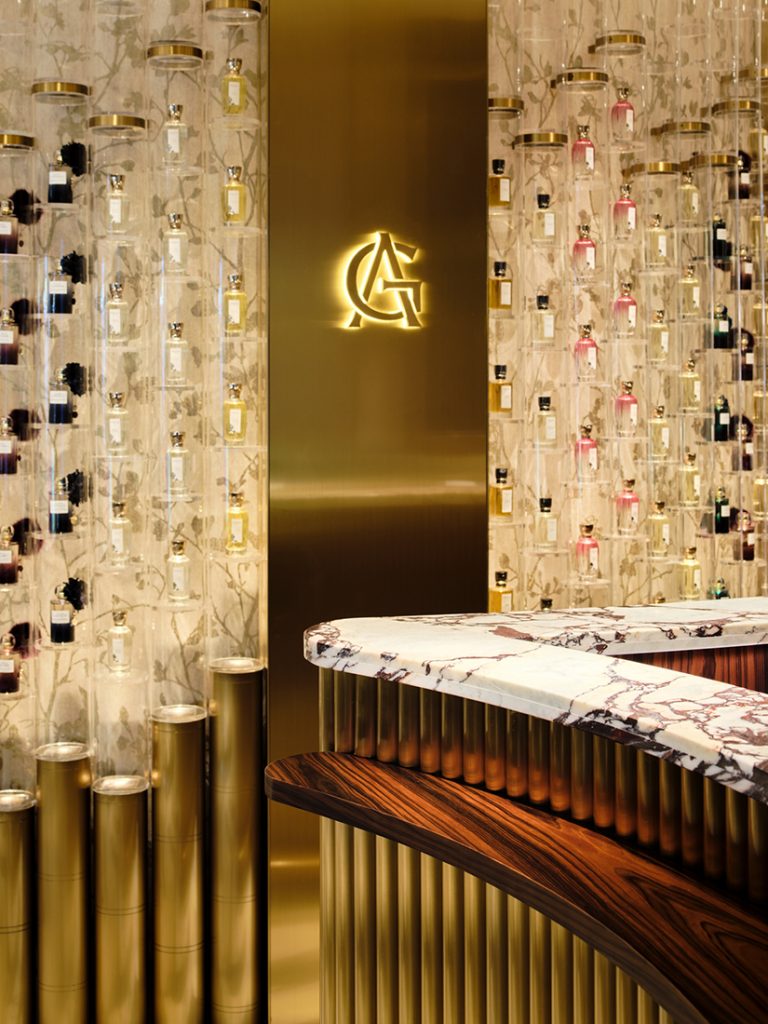 Designed to feel like a dressing room, the Hong Kong Organ also references the newest perfume series from La Maison Goutal: the Night Bird collection, which celebrates women on a night out. The custom-made carpet draws on the sapphire tones of the Nuit et Confidence perfume bottle.

Goutal’s beautiful, fluted glass bottles are something the brand is famous for, and via architecture also brought this into the store’s design through fluted glass and brass elements.

Also inspired by the Night Bird collection is the Sensory Lounge, an intimate space dedicated to mingling taste and olfactory experiences through wine and perfume pairings. “We used some of the deeper tones from the Night Bird collection here,” says Leung. Rich shades of amethyst dominate the bar’s marble top and its base, as well as the arched display shelves that echo the storefront arches. 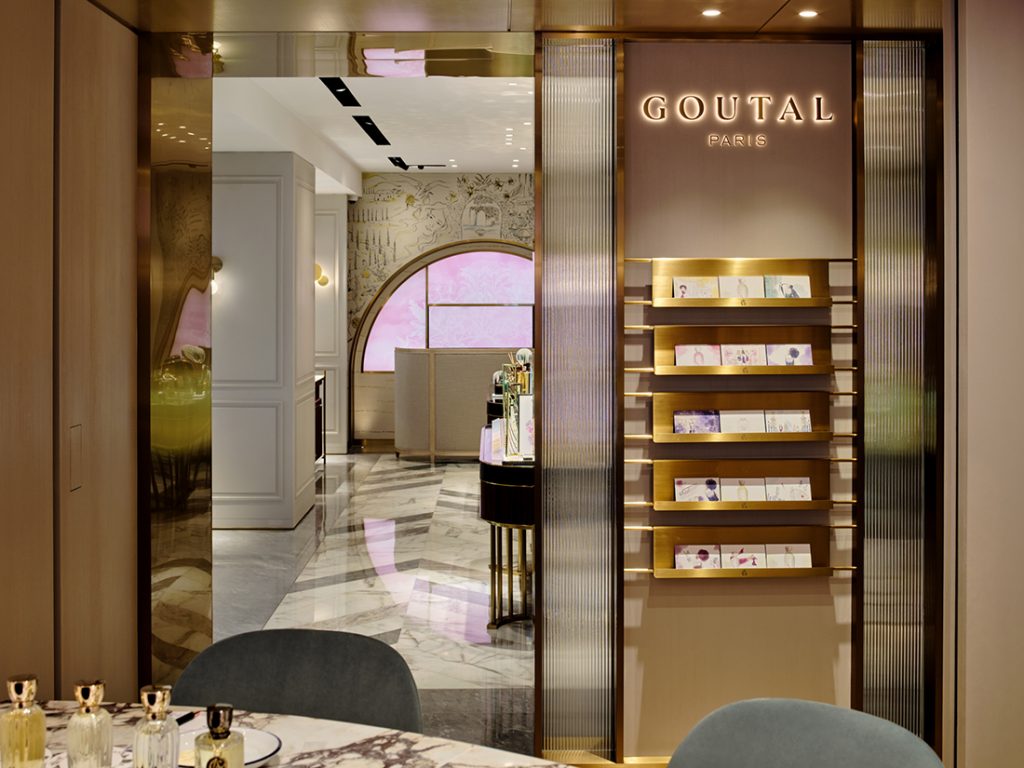 “Our intention was to create an intimate enclosure, away from the rest of the retail components,” says Leung. “We imagined it as a space where Annick Goutal would have entertained her guests over wine or cocktails in the evening. The set-up also lends itself to other types of functions and events.” 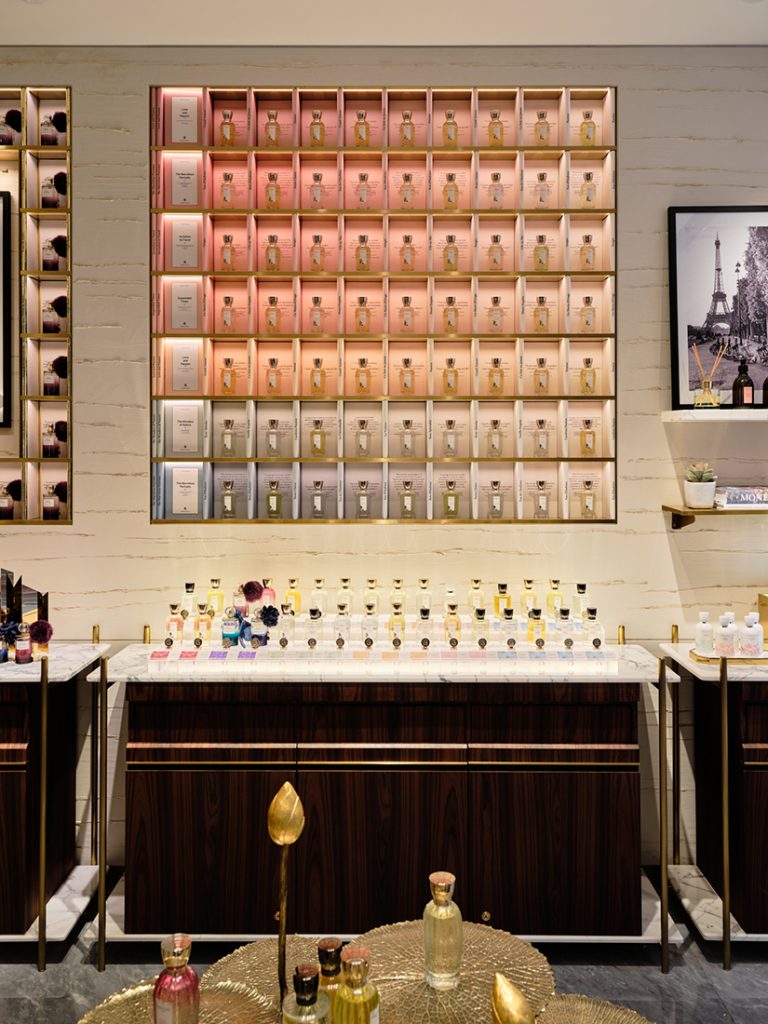 Then there’s the feature bookcase: decorated in graduating shades of rose, lavender, apricot and ivory, it draws on the brand’s heritage and its many fragrances. “The client [AmorePacific, the South Korean beauty and cosmetics conglomerate that owns the Goutal brand] wanted to include a multi-coloured feature bookcase to showcase the collections – or the ‘chapters’ – within the Goutal range. Each level reflects one of the house’s olfactory families inspired by literature, and along the gradient are the different scents – like chapters in a book, waiting to be unveiled,” says Leung. 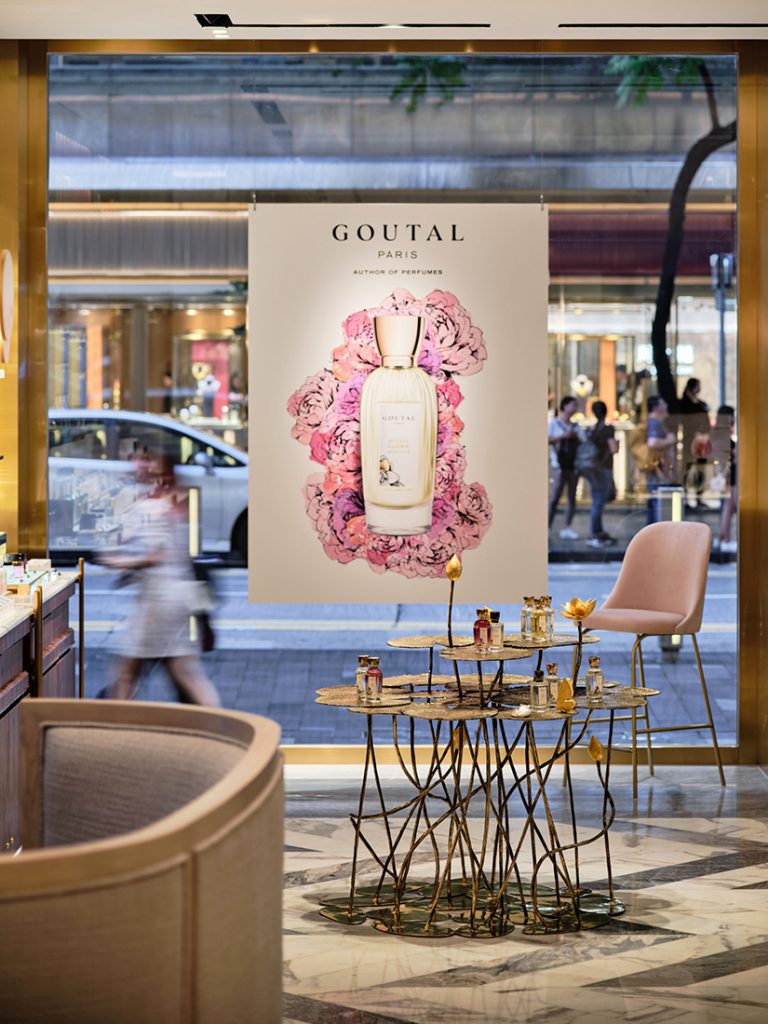 At every turn in this seemingly simple store, there is another story. It’s subtle, but if you look beyond the surface you will find a multitude of allusions to La Maison Goutal’s 30-year history, to its celebration of women and their sensuality, and to the original Goutal woman herself. 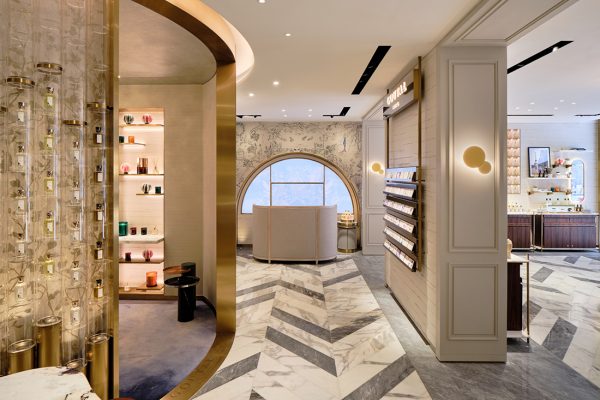