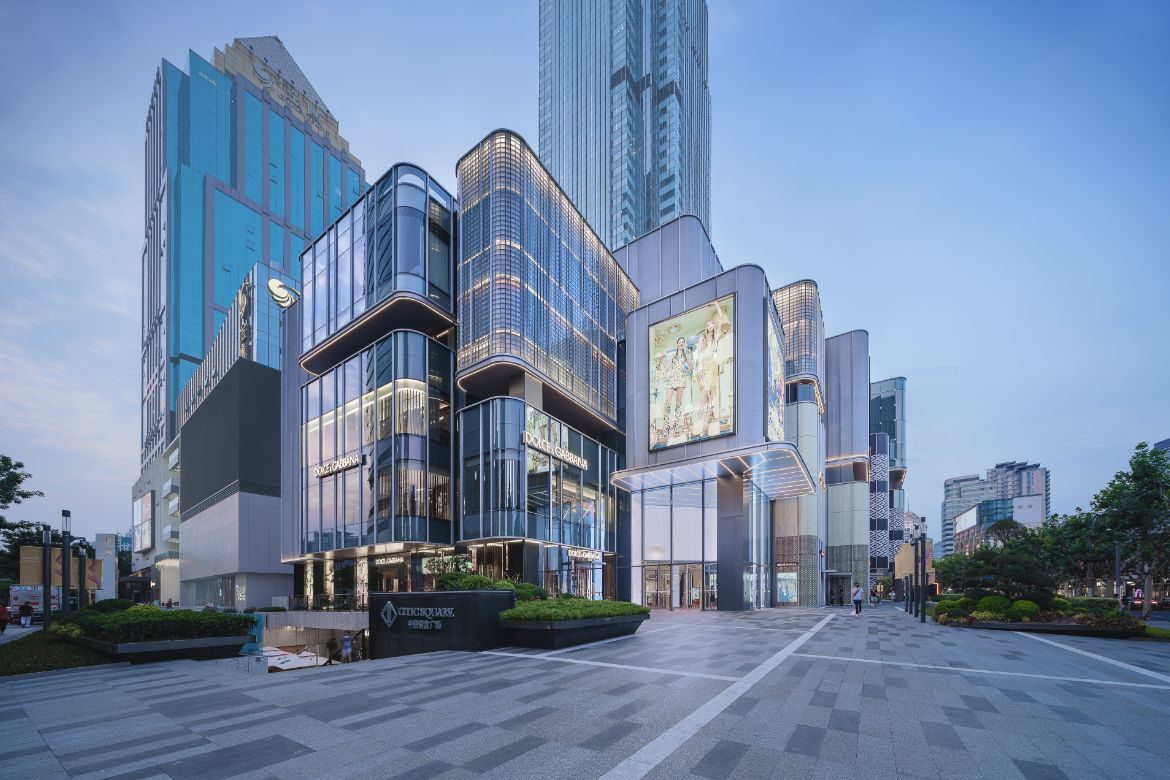 Located in Jingan district along the main thoroughfare of Nanjing West Road, Kokaistudios’ recently completed architectural renovation project of the CITIC SQUARE shopping mall epitomises Shanghai’s inherent duality. With a futuristic aesthetic that combines multimedia elements with some of today’s most sought-after luxury brands, it sits seamlessly alongside one of the city’s best-preserved examples of 弄堂 lòngtáng (local traditional, historic lane housing dating from the early twentieth century).

The transformed building’s pixel-inspired facade and carefully selected materials break the traditional ‘box’ shape to successfully re-integrate the mall into the fabric of Shanghai’s cityscape by opening previously hidden vistas. The approach demonstrates an elegant playfulness with scale to complement the mall’s layered urban context.

The mall was originally completed in 2000. Overtime it lacked several of the elements demanded by today’s lifestyle-led retail environment, such as flexible multimedia components, attractive outdoor spaces, eye-catching interiors for high-profile luxury and F&B outlets. By using the concept of pixels which are central to Kokaistudios’ design approach, the result of the interior and exterior renovation is not just a blurring of boundaries between city and mall, public and private, but it also elevates the mall into a destination shopping-hospitality experience.

The interpretation of pixels here is both literal – such as the mall’s transparent grid facade – as well as conceptual, such as the individual units that come together to create a cohesive whole. They are most visible on the elevation facing Nanjing Road where an outdated glass and stone facade has been replaced by a series of large-sized rectangles and squares of varying dimensions and gradated opacities, each protruding from the building’s core volume to create the impression of floating cubes.

This ‘pixel’ approach allows tenants to customize their own vitrines by effectively acting as individual shopfront windows. It also helps to create a three-dimensional elevation that adds interest to the building facade from the street level.

A network of sunken and floating gardens is created through terraces atop each of the facade’s pixel windows which provides green relief and significantly enhances the stores’ attractiveness by offering unique views for the shoppers. The roof, which was previously a repository for the mall’s mechanical functions and equipment, has also been transformed into an outdoor dining area for CITIC SQUARE’s anchor F&B tenant, including the square outdoor activity area.

The use of pixels is also a main design approach to break up the existing ‘boxy’ interior, where a formerly vast atrium is now dissected by a mezzanine. By tapping onto the lower levels’ custom-made facades which allows for greater light control as opposed to the upper floors, which has abundance of light through use of transparent glass, the mezzanine platform separates the interior space into two distinct atmospheres, signalling to shoppers a transition between fashion below, and F&B above.

By thoughtful placement of escalators near the entrances, the new interior spatial arrangement allows shoppers to easily navigate between either atmosphere depending on their needs for the day. For example, the East entrance opens into a lifestyle space due to its proximity to Nanjing Xi Lu subway station. The West entrance is close to nearby luxury shopping destination Plaza 66, and guides visitors towards a thematically similar high-end fashion mall.

Like a secondary circulation that resembles a shopper’s route, LED screens run throughout the atrium in an infinite loop. Fully customisable, they update the mall into a dynamic multimedia space. Resembling a pulsating data flow, they reinforce CITIC SQUARE’s pixel theme to digital, literal, and futuristic effect. The design trope is revisited in an abstract way in striking lift lobbies as well, where walls of glass bricks create impactful pixelated numbers.

To stand out in Shanghai’s increasingly congested retail landscape, malls must move with the times. At the same time, these large footprint buildings must be comprehensively and seamlessly incorporated into public spaces. Kokaistudios’ smart renovation of CITIC SQUARE achieves just this balance that does not dominate the Jingan skyline; but rather, complements it with a rich, varied urban fabric that doubles as a fully flexible multimedia, lifestyle venue.