KAIT Plaza is a lesson in freeing architecture from its stereotype

For the students of Kanagawa Institute of Technology, architect Junya Ishigami constructs a new plane of existence, sandwiched between sky and earth. 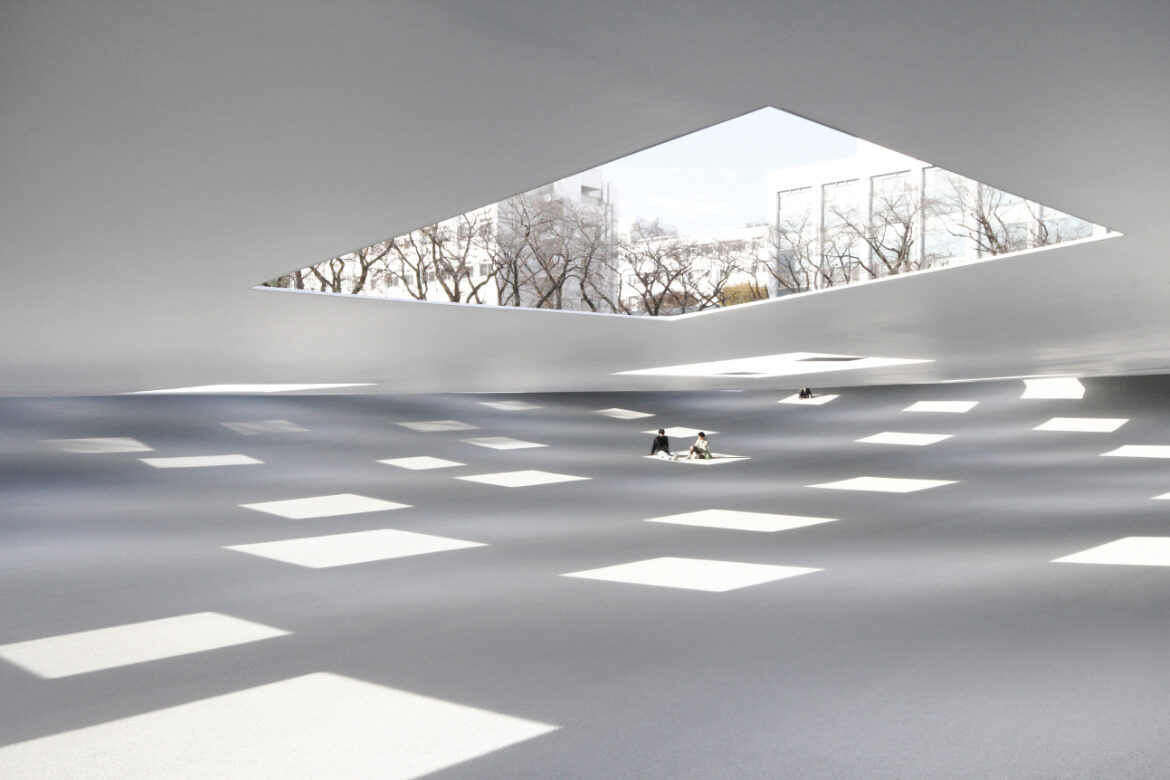 Light forms pockets of spaces in the seeming emptiness. Photography by JUNYA.ISHIGAMI+ASSOCIATES

Just before the completion of his breakthrough project – Kanagawa Institute of Technology (KAIT) Workshop in 2008, Junya Ishigami embarked on the design for a multipurpose space for students on an adjacent site – KAIT Plaza. Whereas KAIT Workshop was designed as a forest, its architectural sequel was conceived as a horizon-like space, which Ishigami imagines as a formless landscape that stretches out as far as the eye can see. Just as a horizon is formed between the sky and earth, the envisioned space needs to be framed between two horizontal planes. Ishigami achieves this through the formal strategy of lifting an expansive steel plate from the ground.

Floating above a column-free expanse, the 12-millimetre-thick roof deflects slightly at its centre, creating an ethereal sky-like surface. A plane underneath traces the roof curvature to form a gentle concave ground. Sky and ground bend and stretch in tandem, meeting together in the distance to envelope a seemingly boundless space where people appear from one end of the horizon and disappear on the other.

Within this vastness (wherein the longest span is 90 metres), the ceiling height is kept between 2.2  metres and 2.8 meters. This juxtaposition between “immeasurable vastness” and “cosy compactness” augments the sense of horizon and creates a vital duality characteristic of new environments that emerge when boundaries between natural and artificial environments are erased.

Fifty-nine openings in the roof allows natural light, wind, and rain into this space. These square-shape perforations, together with gradual oscillation of the roof through thermal expansion and contraction, causes an internal environment that changes with the seasons and weather.

These simple interventions culminate in endless permutations of poetic experiences, all of which palpably Japanese, as Ishigami illustrated: “On a clear day, the light quality reminds of light and shadow emerging from the play between clouds and the sun. On rainy days, raindrops falling through the openings look like rain pillars, creating a hazy scenery. You can feel the sound of rain in the room, and see the rain in front of you, so the natural changes perceived by the senses become the architectural scenery.”

The visual efficiency of Ishigami’s architectural language often belies his depth of inquiry and attention to detail. In KAIT Plaza the concept of horizon and the consequent architectural atmosphere emerged from critical analyses of the notions of versatility and the semi-outdoor.

Given the many multipurpose spaces already available, versatility is approached not in terms of function but rather a freedom of how space can be experienced. As Ishigami explains, “if you emphasise on the ways of how to spend time here, the focus is on personal experience. The process of passing time becomes the subject.”

Ishigami also recognised the need for a new “outside-ness” as a response to the lack of landscape diversity in the site’s built-up surroundings, and to create an environment that would attract people. The appealing scenery inside the building is achieved through planning and designing by treating this “outside-ness” as architecture.

In his illustration of the various emerging architectural trends of our times, Spanish architect Alejandro Zaera-Polo’s highlighted and observed these qualities of Ishigami’s approach: “In Ishigami’s work we find precisely the attempt to defy materiality, which oddly takes him to a very deep exploration of the matter. His attempt to relinquish space in favour of atmosphere is significant to understand where the value of his stock is located.”

Ishigami’s pursuit to discover new possibilities and experiences in architecture has showcased his ability to meld sensorial experience and rational use of spaces. This largely stems from Ishigami’s perception of rationality as less of a linear connection between function and form, and more about the linking of new relationships in a complex web: “Amid the whole, such relationships are always unstable, and engaged in a rocky search for stability. One aspect of the relationship manifested in this phenomenon is that which we call function.”

In a time when the world is faced with the need to rethink how we live, play and work, Ishigami’s work suggests opportunities for paradigm shifts in the way spaces for even function-centric programs such as workplaces can be conceived.

Plaza of Kanagawa Institute of Technology

Related: Pinghe Bibliotheater presents an ocean of knowledge for students