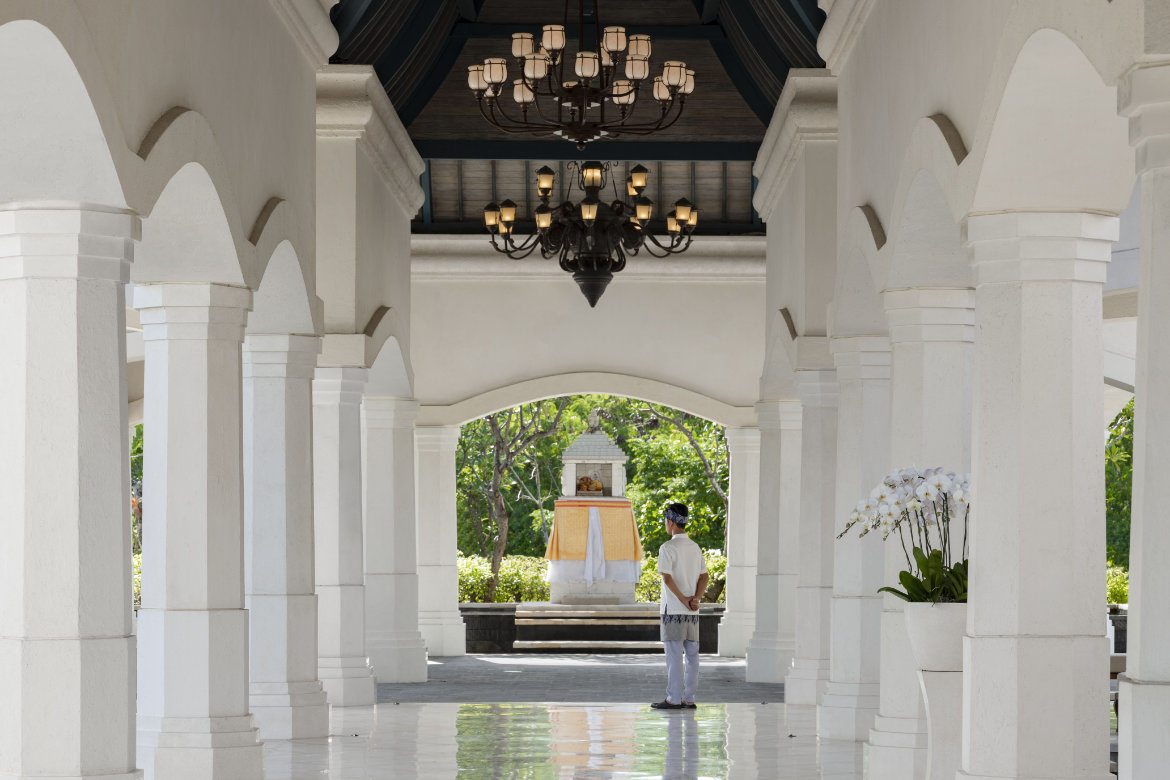 Located on Uluwatu in Bali, Indonesia, Jumeirah Bali is a luxurious resort with 123 sprawling villas interspersed with calming water sculptures and seamless gardens. The overall design is a collaboration between Martin Grounds from Grounds Kent Architects who helmed the architectural concept, Jean-Michel Gathy from design consultancy Denniston International and landscape design by the late Made Wijaya.

Jumeirah Bali connects the past and present by remixing old Hindu-Javanese cultural elements with tropical modernism. The design narrative is informed by the golden era of the Majapahit empire – the last Indianised kingdom in Indonesia – which reached its peak and became a powerful force in Southeast Asia during the mid-14th century. It served as a luxurious sanctuary for Bali’s ruling elite in 1343.

Looking back at history, the maritime empire’s architectural vernacular was once characterised by clusters of pavilions with stunning water features. Likewise, Jumeirah Bali, seen as a ‘sumptuous water palace that celebrates the magic of life’, faces the Indian ocean and was designed in a way whereby guests are never too far away from the water, be it via a pool, ocean or a water sculpture, inviting a sense of peace and calm throughout their stay.

Upon arrival, guests walk through a traditional Balinese gate flanked by two stone lion sculptures and two winged creatures from the past overhead, seemingly guarding the space and its inhabitants. “Local culture, full of symbolism, considers gates to be important portals that connect the physical world and the spiritual realm,” says the design team.

Symbolic elements are conveyed throughout the property, waiting to be discovered: The garden features a giant red Bodhi tree (a powerful Buddhist symbol); the courtyard features a traditional Javanese pendopo pavilion; there are intricate wall carvings that tell the story of Ramayana, a Sanskrit epic from ancient India, alongside other enchanting features like Majapahit-style swing doors.

Ancient elements were brought to life with modern-day touches. A main focus of the resort is the largest swimming pool (out of three swimming pools) in an organic form, representing Waduk Baureo, the legendary reservoir of Majapahit. The pool looks out to the golden sunset and Dreamland Beach.

Each villa features a private pool, outdoor living area and a landscaped tropical garden. Continuing the design narrative, Gathy’s team integrated outdoor showers and covered pendopo pavilions that overlook the horizon within individual villas. Tired guests can also head to the 1,705-square-metre Talise Spa for a rejuvenating treatment including a lavish Turkish hammam that tributes to the Arabian influence that the empire experienced before its fall.

The sprawling 11-hectare indoor-outdoor site features a cascading topography that enables guests to immerse in the environment on multiple elevations among landscaped terraces as they travel from the upper lobby to the piazza and villa levels underscored by ocean waves. Situated on the highest grounds, the resort restaurant looks out to a panorama of endless blue skies and sea – a testament that manmade empires may collapse but nature is ever-present.