Jewel Changi Airport: What To Expect From Singapore’s New Gem

Jewel Changi Airport will open in phases from 17 April 2019. Here’s what to expect from Singapore’s newest star attraction.

The buzz is building ahead of the phased opening of Jewel Changi Airport in Q2. Changi Airport has announced preview tours for the public in April, and Safdie Architects (the design architect for the project) has released renderings and information to pique our excitement.

Jewel Changi Airport, says Safdie Architects, will set a new standard for community-centric airport design. With a total area of 153,984 square metres, it will contain a five-storey garden with walking trails, a 40-metre-high indoor waterfall, restaurants, retail, a light and sound show, a hotel, and spaces for community activities. 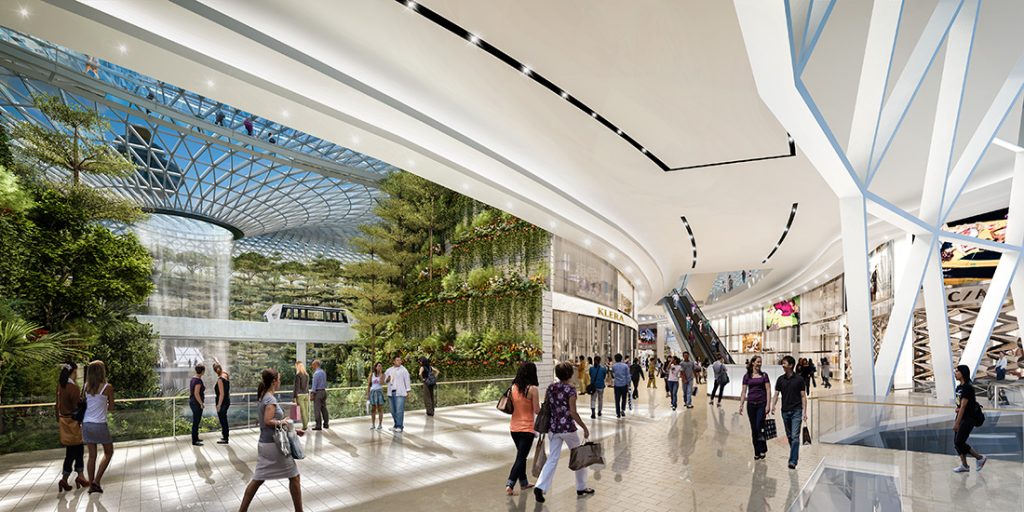 While some of those elements may sound familiar to garden lovers in Singapore, Jewel Changi Airport will, of course, redefine the airport experience and create a new heart at Changi beside the iconic Changi Control Tower.

And the indoor waterfall, pouring through a central oculus in the dome at a rate of up to 10,000 gallons per minute at peak times (during thunderstorms), will be the world’s tallest. The water output will be recycled throughout the building. 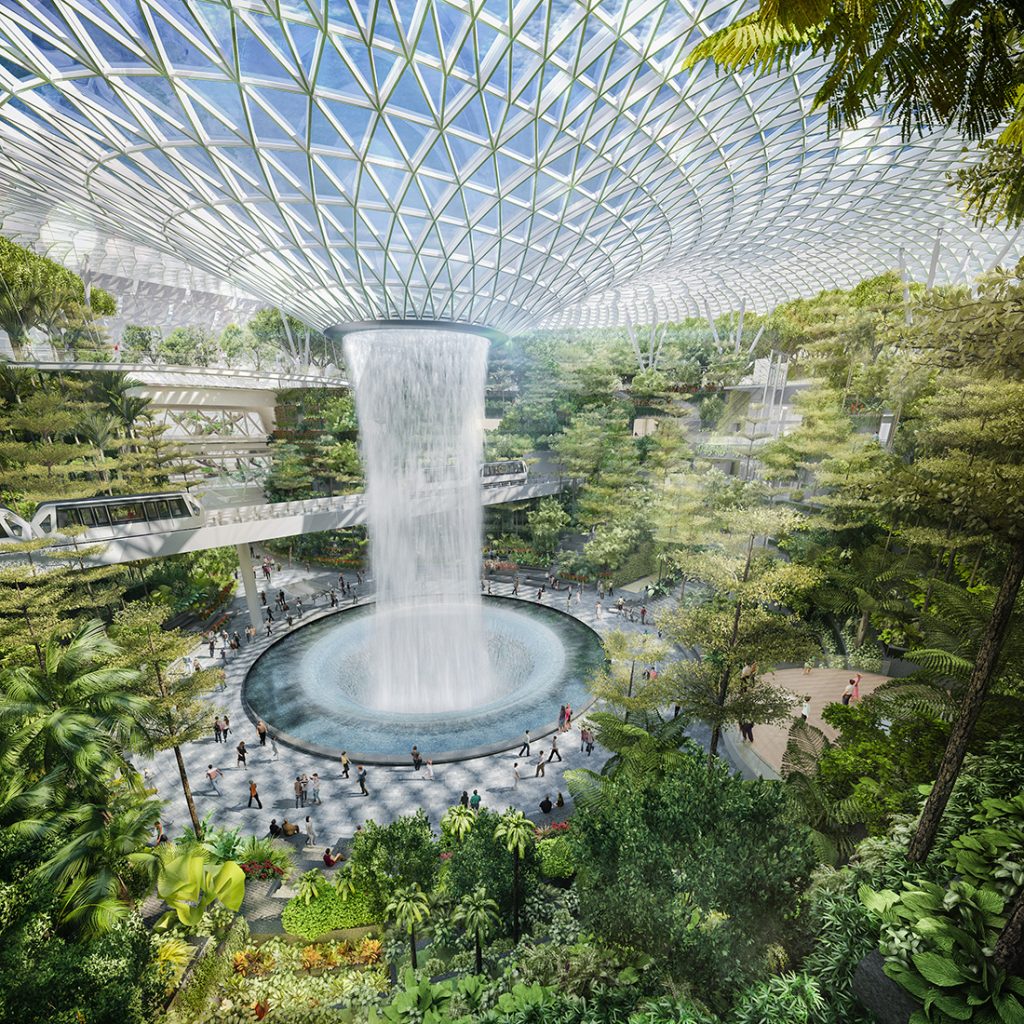 The Forest Valley with the Rain Vortex

“Jewel weaves together an experience of nature and the marketplace,” says Moshe Safdie, “dramatically asserting the idea of the airport as an uplifting and vibrant urban centre, engaging travellers, visitors and residents, and echoing Singapore’s reputation as ‘The City in the Garden’.

Jewel Changi Airport will be a destination for transit passengers as well as the general public, and will offer plenty of features to attract interest. The ‘Forest Valley’ will fuse a lush terraced indoor garden with a five-level retail marketplace. Approximately 2,500 trees and 100,000 shrubs will be incorporated, with plant material sourced from Brazil, Australia, China, Malaysia, Thailand and the United States. 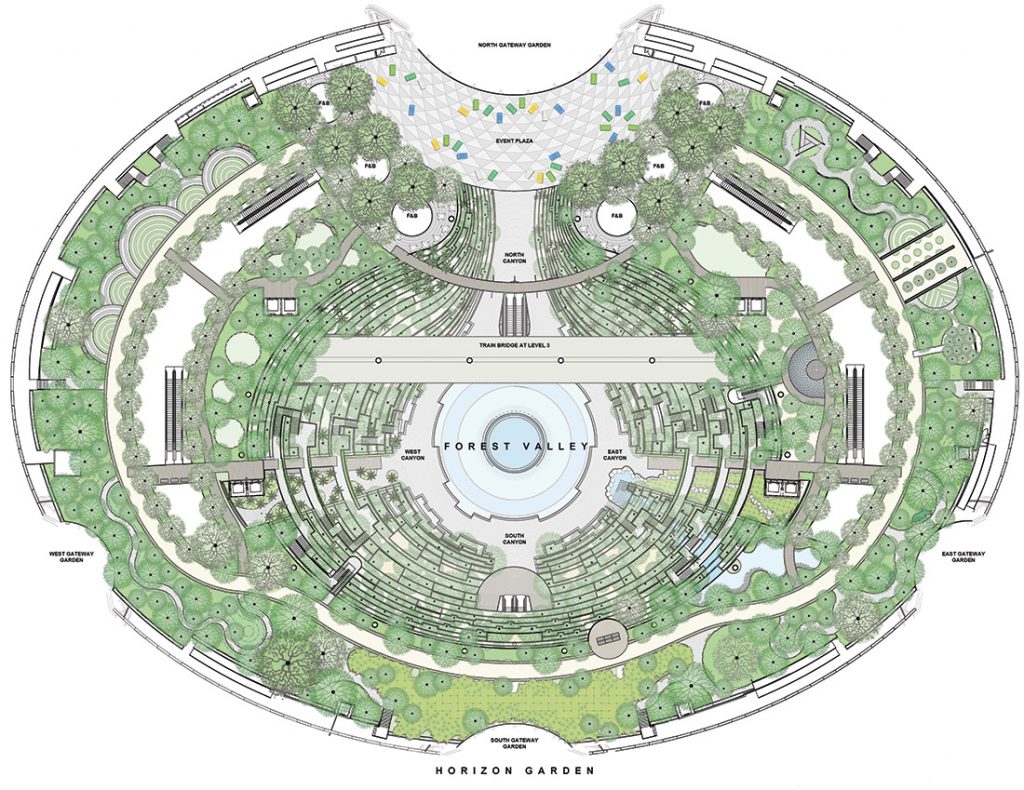 Walking trails and quiet seating areas will be a counterpoint to the ‘Rain Vortex’, which will rain down from the oculus of the glass-enclosed toroidal building. The shell façade weighs 6,000 tonnes and the roof is supported by a ring of tree-like columns. 9,304 individually numbered panels of triple low-E glass (each with a QR code) were fitted. A system of static and dynamic shading is integrated with the glazing system. Green Mark Platinum certification is expected.

The ‘Canopy Park’ on the fifth level will offer attractions integrated within the garden spaces, such as net structures suspended between trees, a suspended catenary glass-bottom bridge, a hedge maze, a mirror maze, a topiary walk and art installations. An event plaza will be able to accommodate 1,000 people.

Section through retail and gardens

Jewel will be linked directly to the Changi Bus Terminal and have open access to Terminal 1, with pedestrian bridges connecting it to Terminals 2 and 3. The inter-terminal train will cross through the gardens for quick glimpses between flights.

Many collaborators were critical to the delivery of the project:

We look forward to experiencing Jewel!