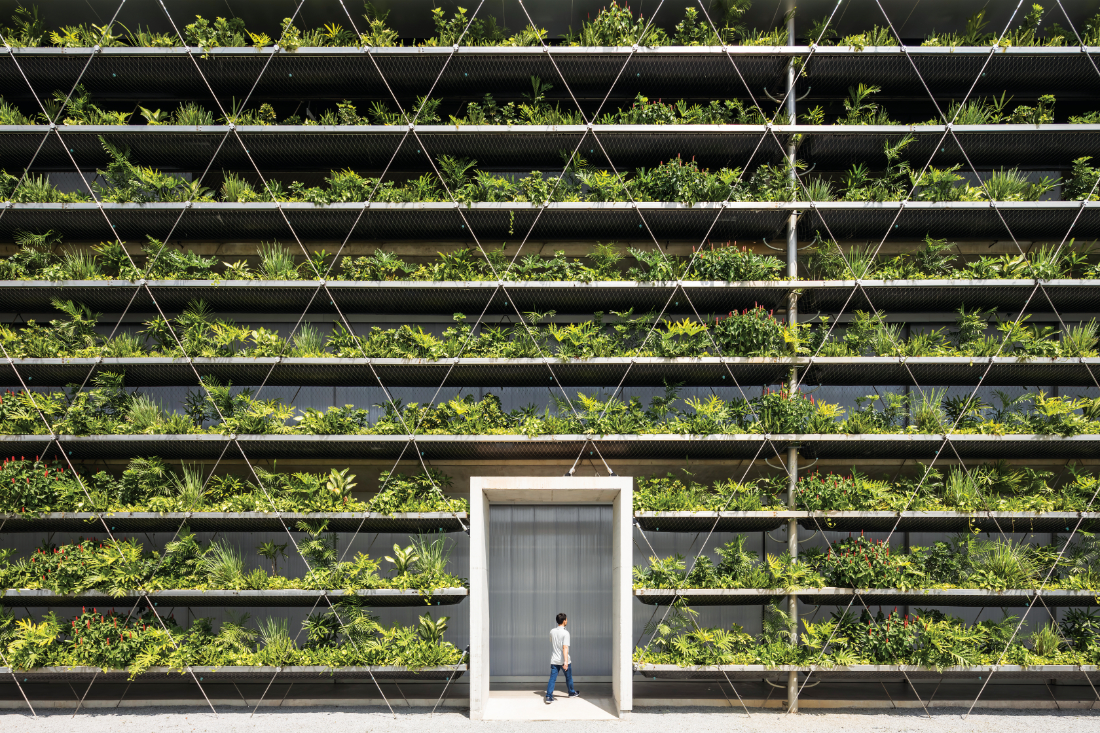 Planters are held in place by a web of steel cables that simultaneously showcases the potential of Jakob Rope Systems’ products.

Over almost two decades, Ho Chi Minh City has been one of Vietnam’s shining trophies of progress, developing at breakneck speed and attracting droves of people into the city. Like a magnet pulling everything to itself, Vietnam’s economic capital has, unfortunately, also drawn industrial parks inwards because of the infrastructure and transportation network it affords them. As a result, a belt of barren, non-porous ground—thanks to the indiscriminate settlement of factories on the land—sits on the outskirts of Ho Chi Minh City. The environmental consequences are detrimental, particularly for a heat-laden city that is also prone to flooding. It is against this backdrop that Jakob Factory presents an alternative.

Jakob Rope Systems is a Swiss manufacturer of stainless-steel cables and wire mesh for architectural applications with most of its production facilities located in Vietnam. Its latest factory is a result of a design partnership between Swiss-based Rollimarchini Architekten (Rollimarchini) and Swiss-born G8A Architects (G8A), the latter having had an office in Vietnam for 15 years now. The facility sits on a 30,0000sqm plot in the centre of an industrial park 50km north of Ho Chi Minh City and was designed with an eye towards environmental and social sustainability. 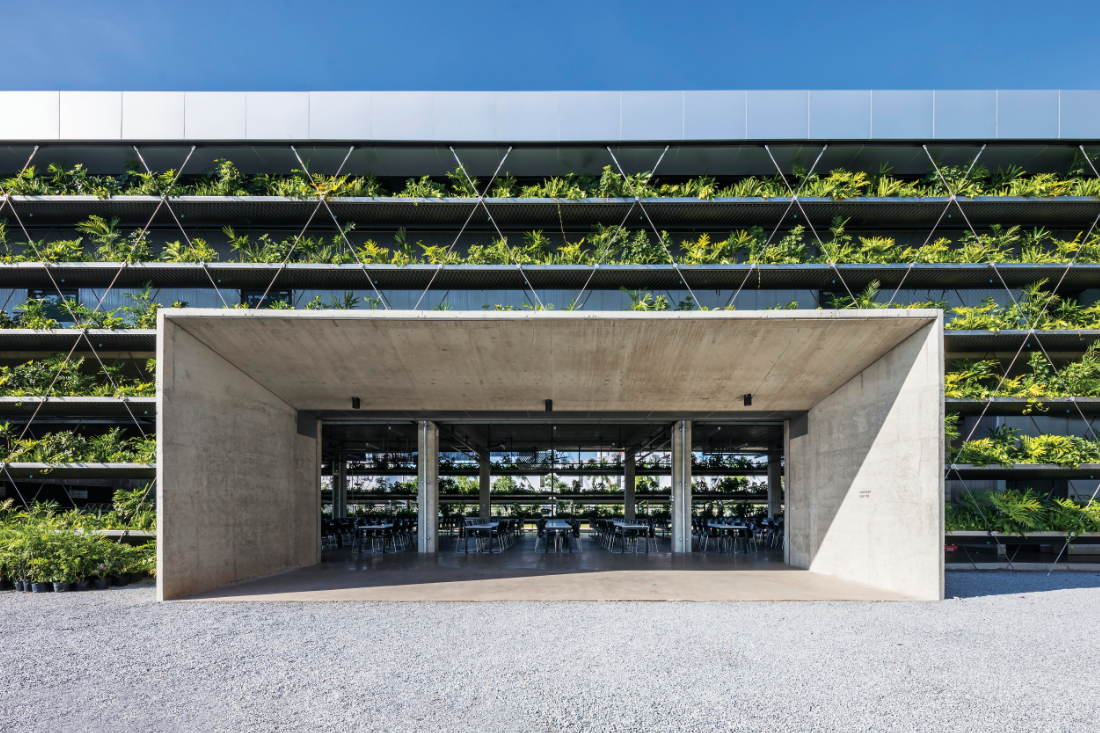 Large halls like the canteen for workers are sandwiched between porous facades that allow air through end-to-end.

An initial research trip to the Mekong area with the client revealed a slew of factories that were built with only economic gain in mind—single-storey enclosed boxes that conveniently ignore the tropical climate. “[In these factories], you need air-conditioning for ventilation, and you don’t have a lot of natural light inside. It’s not a pleasant place to work in,” says Francesco Marchini, founding partner of Rollimarchini. Put plainly, the smells and fumes within such factories make them unhealthy to be in.

Instead of following in the footsteps of high-tech precedents, the design team swung to the other extreme and sought to create the first factory in Vietnam with naturally ventilated manufacturing halls. The open and airy traditional architecture they encountered in the countryside became the catalyst for their low-tech approach to Jakob Factory.

The factory is expressed as an assemblage of two-storey-high blocks around a central courtyard—an allusion to how Vietnamese villages are typically organised and a departure from single-storey factories that usually dominate the entire site. “The client was open to keeping some kind of true-ground condition which would help to cool the space and also give the local ground a chance to survive,” says Manuel Der Hagopian, partner at G8A. In the same breath, the green space offers moments of reprieve and leisure for the workers. As Marchini’s puts it, “The factory is not just a place to work but a place to be.” 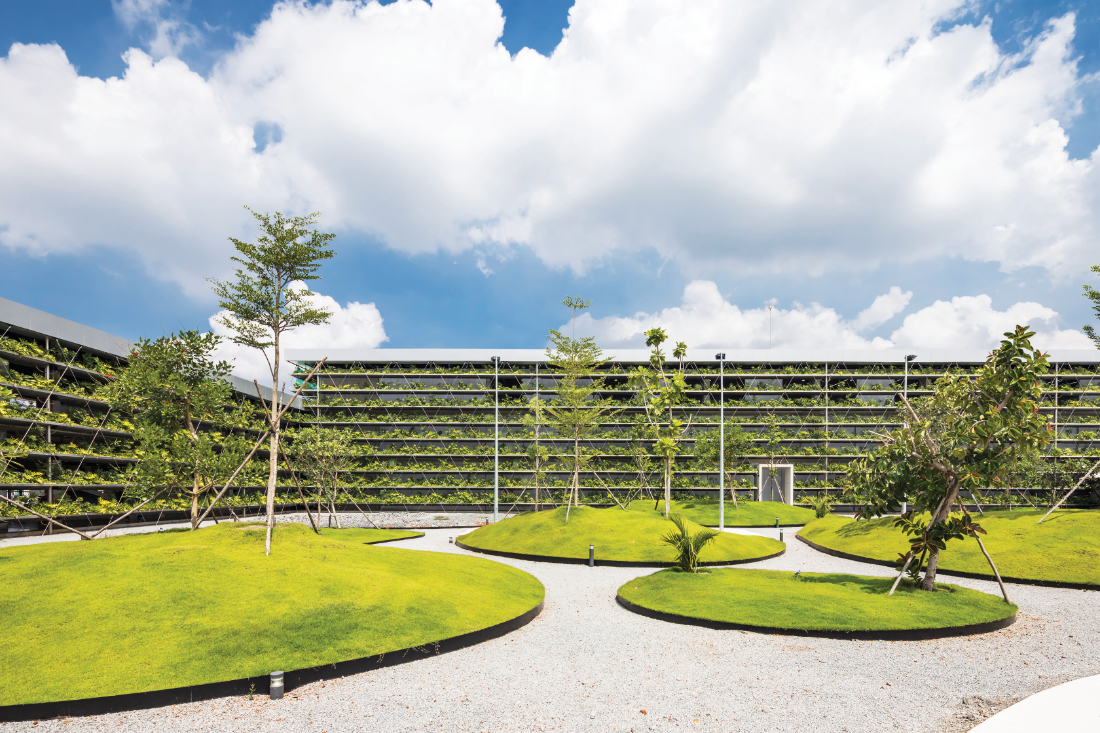 A central courtyard is a device to cool the ambient temperature, maintain local ground conditions, and provide a leisure space for workers.

The unusually tall proportion of the factory meant that much had to be asked of the façade. While it needed to be porous enough to allow daylight and air through, it also had to provide shade and rain protection. A skin of lush plantings ticked all the boxes and then some.

Sandwiching each block, the green façade is the factory’s multi-tasking protagonist that not only mediates the sun and rain, but also purifies the air and helps lower the atmospheric temperature through evaporation. Deep planters made of malleable geotextile are stacked to span the height of the factory. Holding them in place is a suspended structure that hangs off a large mesh-like formation of steel cables—an adept showcase of the client’s product. 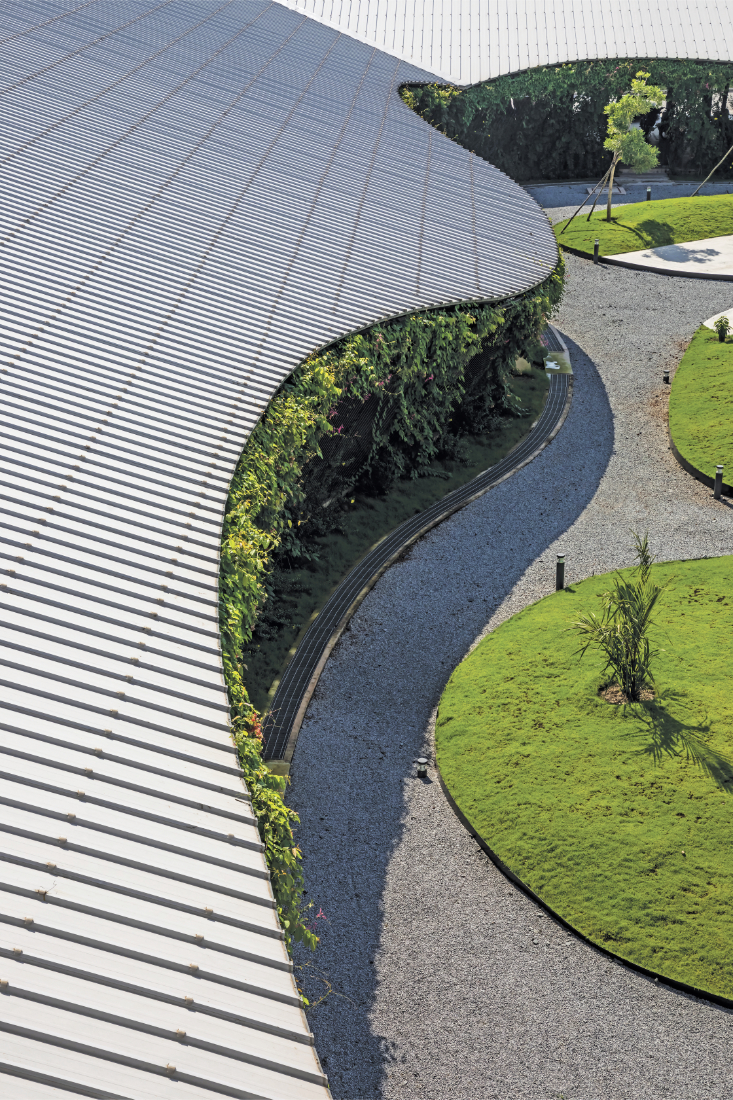 Roofs with deep overhangs echo the traditional tropical architecture that the design team saw during their research in the countryside.

The façade is not an impenetrable defense against the region’s typically heavy tropical rain; neither was it expected to function that way. A corridor mediates between the skin and the halls of the factory. It traces the edge of each block and is a social thoroughfare. Equally important is its role as a buffer to accommodate rain that slips past the façade. Only in extreme conditions, like a typhoon, is a second skin of polycarbonate sliding doors activated.

“On most rainy days, a third of the corridor gets wet. Maybe once or twice a year, the entire corridor is wet. It’s something the client was aware of and accepted,” says Der Hagopian. “It’s a give-and-take with nature and the existing conditions. The building does not rule the place.” 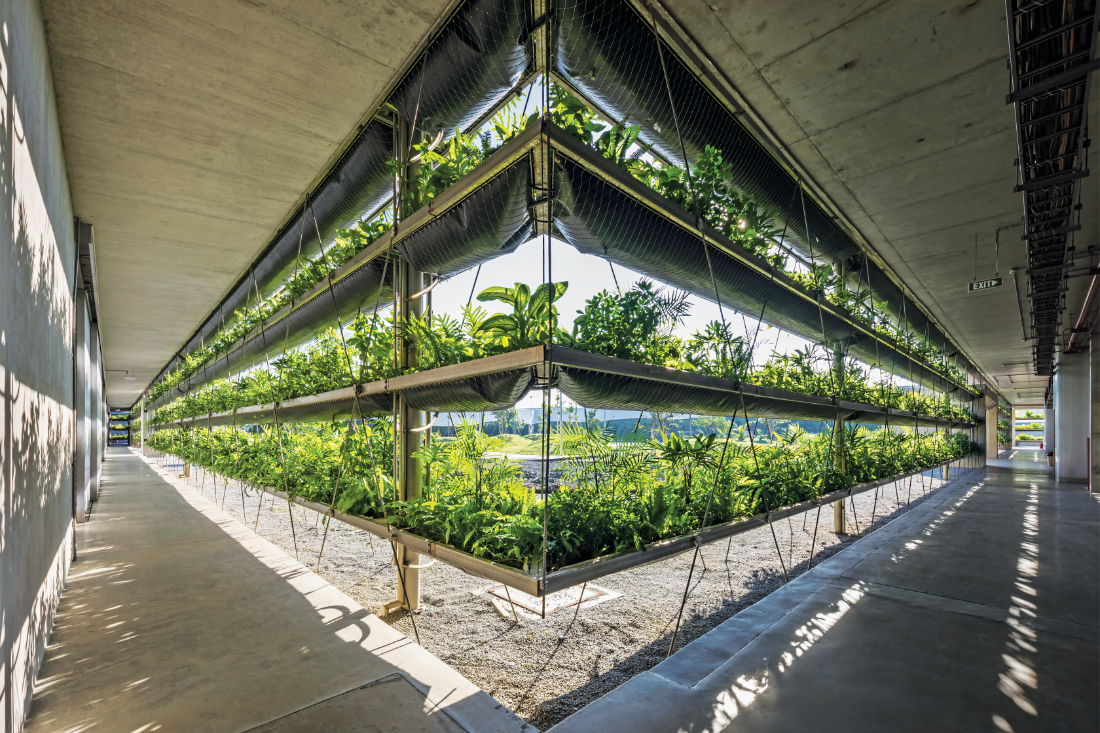 Circling the edge of each block is a corridor that buffers the internal spaces of the factory from the rain.

Admittedly, Rollimarchini and G8A’s proposal for Jakob Factory was not always met with enthusiasm. “For the local management, it was difficult for them to imagine a factory without air-conditioning,” says Marchini, sharing how they first saw it as a form of regression. Now that the factory is in use, however, workers have no complaints. More than that, the experience of factory work has drastically improved for them. As for the management? They have the pleasure of reporting a fifty per cent reduction in energy consumption as compared to another facility in Vietnam.

“This is one out of a thousand factories in the area and it’s not going to change the condition of the area,” Der Hagopian admits. “But it was a way for our client to impact production practices and the way people work, and it’s a prototype of how we can accommodate the challenges of building here.” 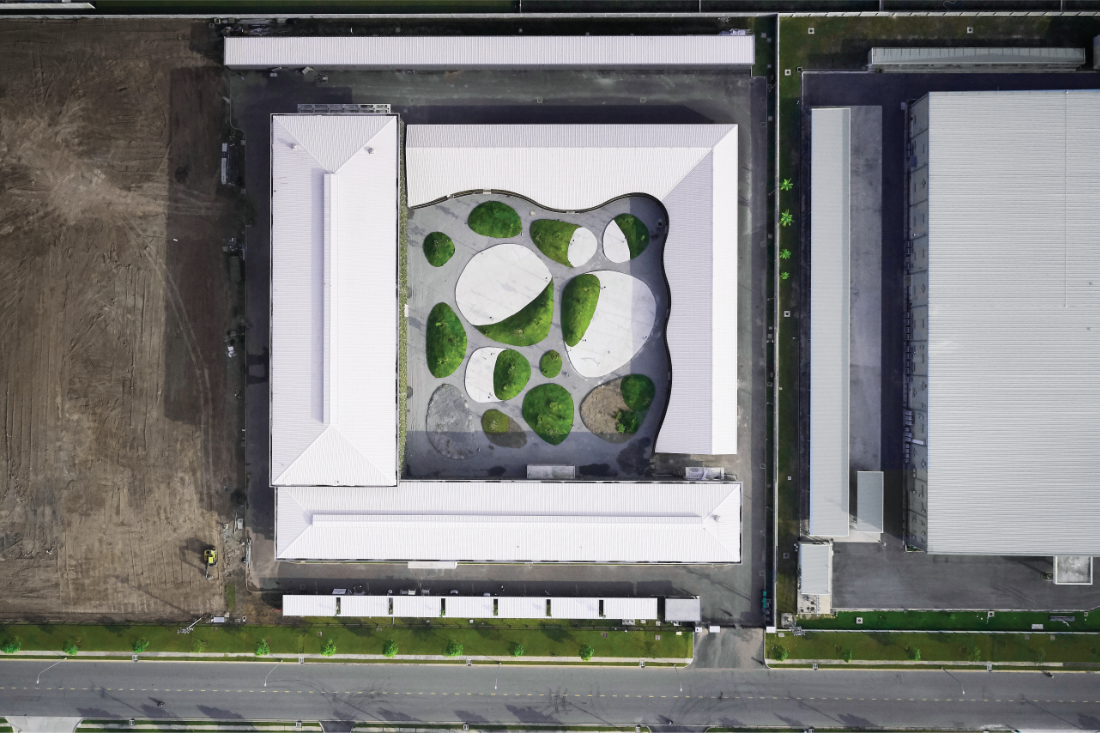 Jakob Factory is shortlisted for the 2021 INDE.Awards 2021: The Building category. See the full list of Shortlist here.