A Galaxy Of Stars: ILATAAJ Creates An Immersive Environment At Lippo Mall Kemang

Andrew Tirta of Jakarta-based studio ILATAAJ relished in the opportunity to use computer-aided manufacturing to create a star-themed canopy for an Indonesian mall. He tells us why.

A canopy of stars has proved to be a successful addition to Lippo Mall in Kemang, Jakarta – that’s judging by social media tags, says Andrew Tirta. In 2009, he established his studio ILATAAJ, which stands for Inter-Linkages of Aptitudes Towards Arrays of Architectural Juxtapositions – a statement of his belief that projects are never the result of a single author, but rather that they benefit from collaborations between various disciplines.

He was commissioned by Lippo Malls to create a canopy for an alfresco area at their Kemang property, as well as a stage for music performances. There had been attempts to cover the alfresco area with a glazed roof in the past, but work was halted by the authorities as it would have exceeded the building coverage limit. A massive grid of structural steel trusses was left, and a need to find a ‘semi-outdoor’ solution.

The area is named ‘Avenue of the Stars’ and was modelled on Hollywood’s Walk of Fame, with star-shaped metal plaques set into the floor. Tirta saw the opportunity to create an immersive brand environment – a spatial experience rooted in the brand identity of the ‘Avenue of the Stars’ – and pushed forward with the star theme. “We tried not to be too literal in developing the module geometry,” he says. 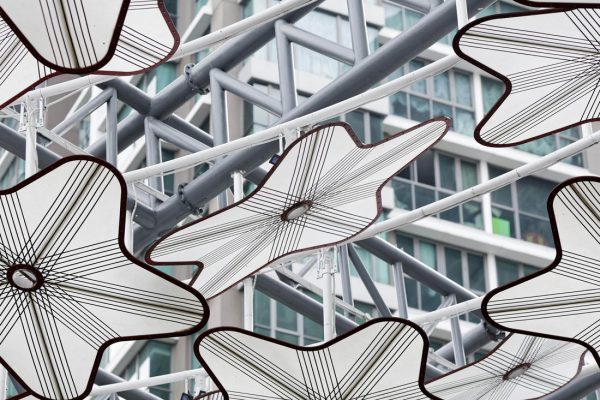 The result is an array of 100 star-shaped lanterns that filter sunlight during the day, glow at night, and allow visitors a little extra time to reach shelter when it rains. They are hung from the existing trusses in two layers – one facing west to filter late afternoon sun, and the other positioned to help direct sound away from the neighbouring residential towers. The position of the stars provides optimal shading for the seating area and encourages movement from the vehicular drop off to the building entrance.

“Apart from the performative aspects, we hoped to create a dreamlike, surreal experience,” recalls Tirta. Each star is covered with stretch fabric that plays a role in filtering noise, and is fitted with LED light sources.

“The client had a contractor on board from the beginning of the project,” says Tirta. “The design process intentionally made the most of a steel laser cutter, which was available in their workshop – still an unusual privilege here in Indonesia.” The stars were therefore made with laser-cut steel plates.

“The contractor was also literate in computer-aided design and manufacturing. It was a delight for us to fully communicate in 3D CAD models,” says Tirta. 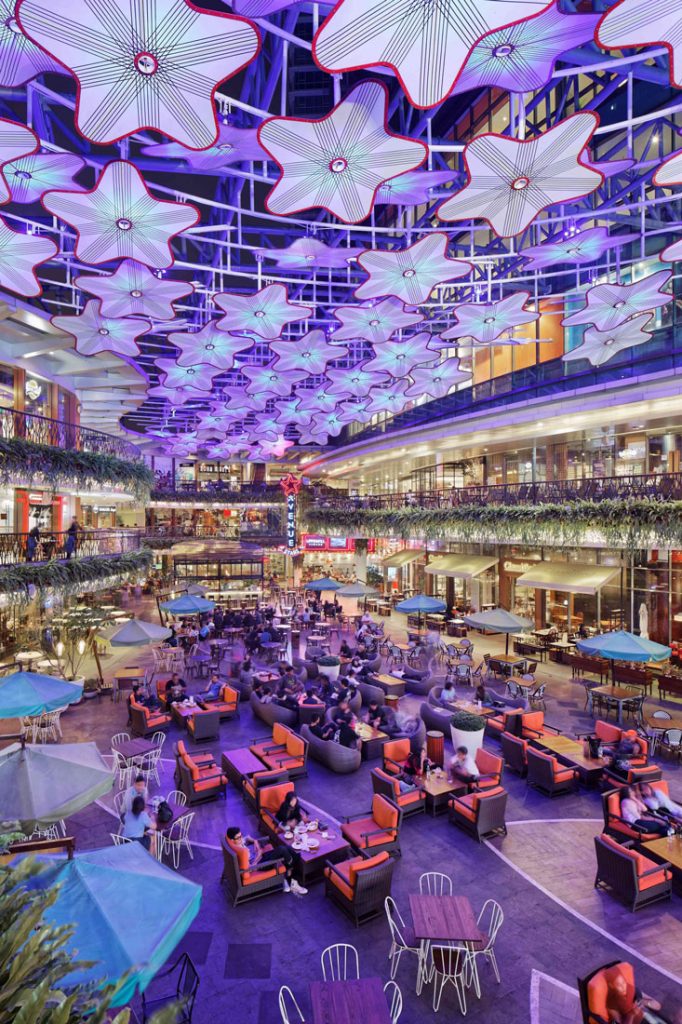 Alongside his design work, Tirta also offers computational design consultation services to other practices – something he’s keen to do more of. To date, he has provided this service to assist with the development of building envelopes for a sports centre and a discovery centre.

So how readily is BIM being taken up in Indonesia? “BIM is definitely more within reach,” he says. “For BIM to be really useful, it needs to be utilised by all parties involved in the project – consultants, contractors and clients. There are some new platforms for web browser-based BIM, and I’m looking forward to trying one of them on a new project. It should be more reachable and persuasive for everyone to use.”

What else would he like to see for the architecture and design industry in Indonesia? “When I worked in London for Marks Barfield Architects, I had the opportunity to work on infrastructure – bridges, walkways, et cetera. I don’t think there’s enough infrastructure projects involving architects in Indonesia.” He does acknowledge however that “we can now see a lot more projects from the public sector since Joko Widodo became President. It’s a good opportunity for practices.”

With his intention to register as an architect in the near future, he’ll without doubt be keeping his eye on the opportunities.