A House Of Fitness By Goy Architects

Goy Architects designed this Singapore home for a pilates practitioner to be fit for physical activity, social engagement and environmental performance.

The new owner of an east-west-facing terrace house in Singapore’s east came to Goy Zhenru, Principal of Goy Architects, with a rather atypical set of requirements for its renovation. And the result is a delightfully atypical residence.

Firstly, there was the requirement for the house to be a sanctuary for both the client and her parents, and for the visitors they would be welcoming to the home. On weekends, the owner conducts pilates workshops on a pro-bono basis for older friends and family members who have mobility issues. Her father volunteers as a counsellor for a prison and meets ex-offenders weekly to facilitate connections with the local community. The house, therefore, had to provide for both the privacy of the family members and as a space where people could gather in different pockets of spaces. 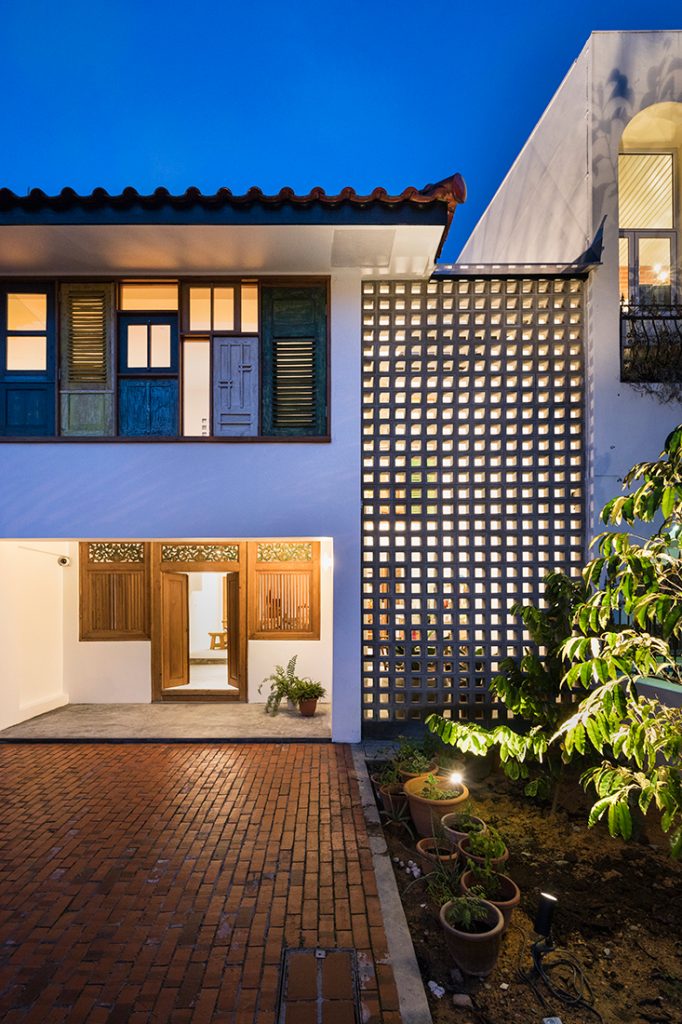 The house has access points at the front and rear, so Goy was able to define a private zone for the parents at the back with their own entrance. The main kitchen space is at the front of the house, and is used as a gathering area. It anchors a number of small social spaces, one of which is a lofty courtyard straddling the living room and dry kitchen. From there, a visual connection with the mezzanine pilates area is established, and the latter, in turn, has a visual connection with the second storey through a puzzle-like screen of reclaimed window frames and shutters. 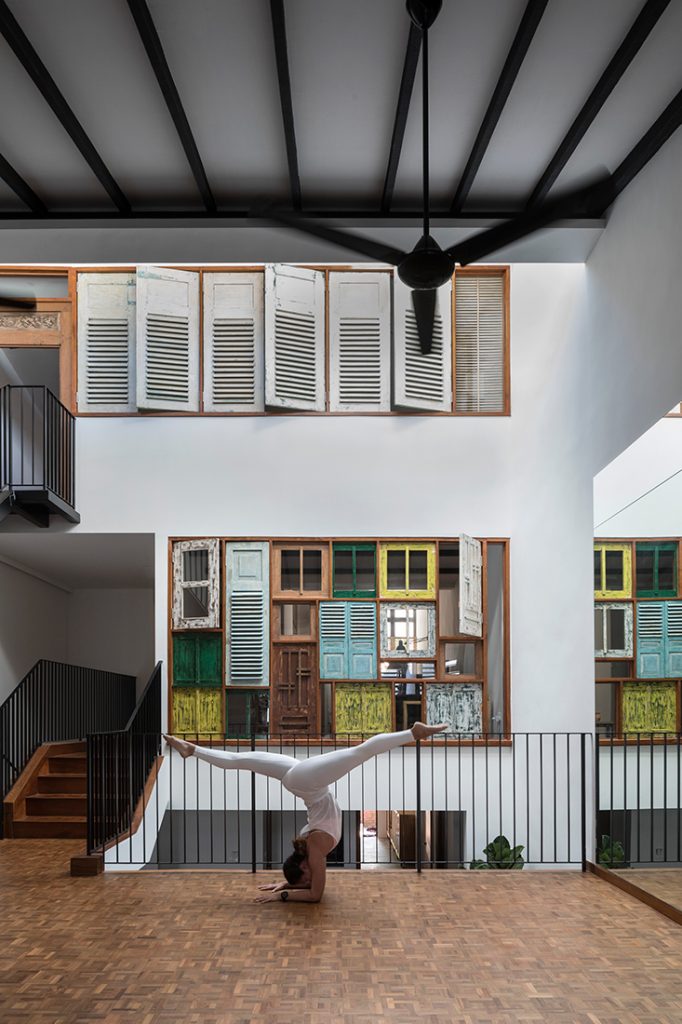 “One person’s trash, as the saying goes, is another person’s treasure,” offers Goy. Her client has a passion for Southeast Asian antiques and sensibilities, and this allowed for the design of a naturally ventilated home incorporating plenty of reclaimed materials sourced from this region.

“With the blessing of the client,” says Goy, “we started to source for reclaimed teak windows and doors in Java.” She and her colleague Ni Nyomah Dessy Angga Dewi embarked on a detailed process of understanding common component sizes and defining aggregate designs and quantities. 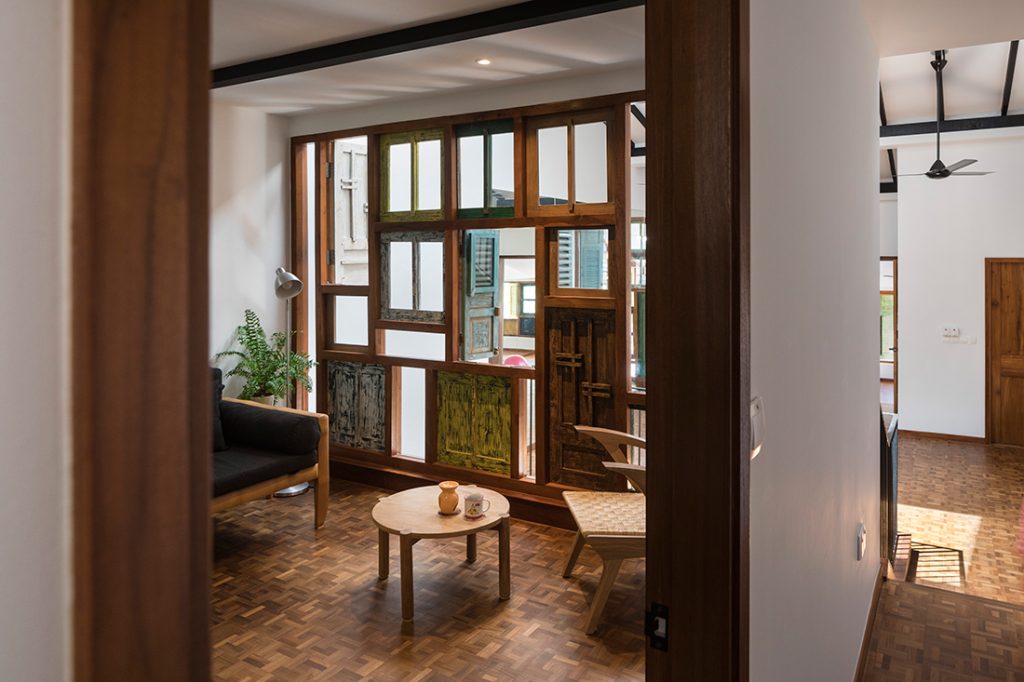 Recalls Goy, “We consulted with a lecturer, Andi Putranto in the Department of Archaeology in University Gadjah Mada in Yogyakarta, who has a passion for restoring reclaimed timber windows and doors.” The entrance door and window set was reclaimed from a 1950s-era family house in east Java. “It is made of jack fruit trees, which were widely used alongside teak,” explains Goy. “The selected door has a closed lotus bud carved on the transom, which symbolises innate human potential for enlightenment – a coincidental match for the house,” she adds. 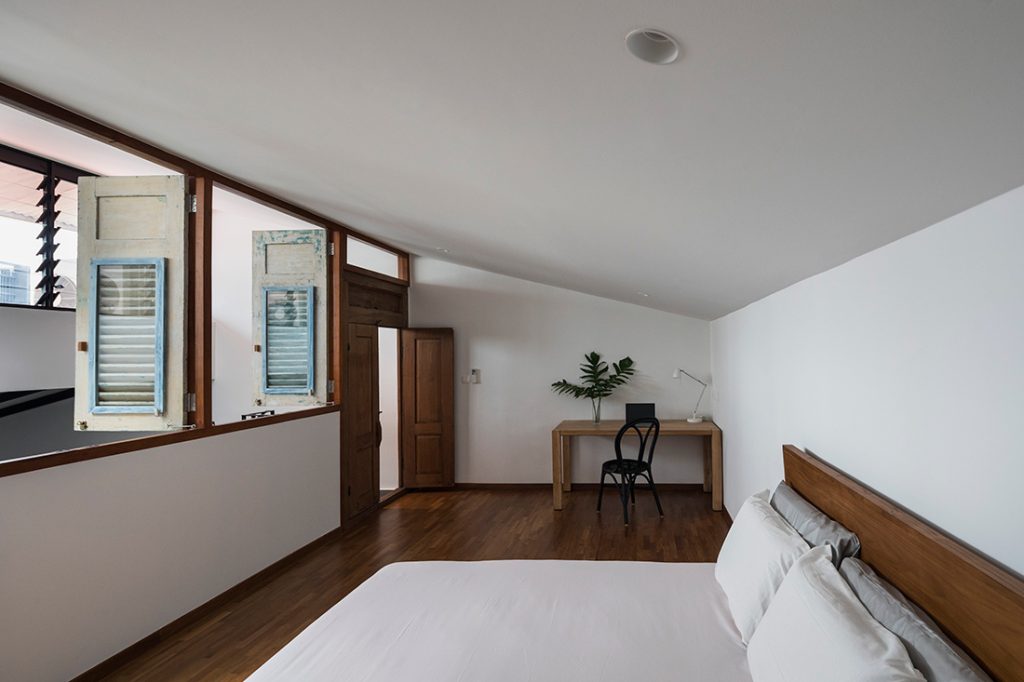 The client’s wish to reduce her use of air-conditioning required a revision of the existing attic coverage, which had perviously created a dark interior with reduced natural air flow, but a maximum square footage. “Our first line of action was to reduce the coverage of the attic and reintroduce the skylight and airwell to the centre of the house,” says Goy. Now louvred windows allow for passive cooling through convection and the skylight brightens up the interior, also allowing vegetation to thrive in the courtyard. A new vent-block screen at the front naturally ventilates the wet kitchen and reduces heat and glare from the west. 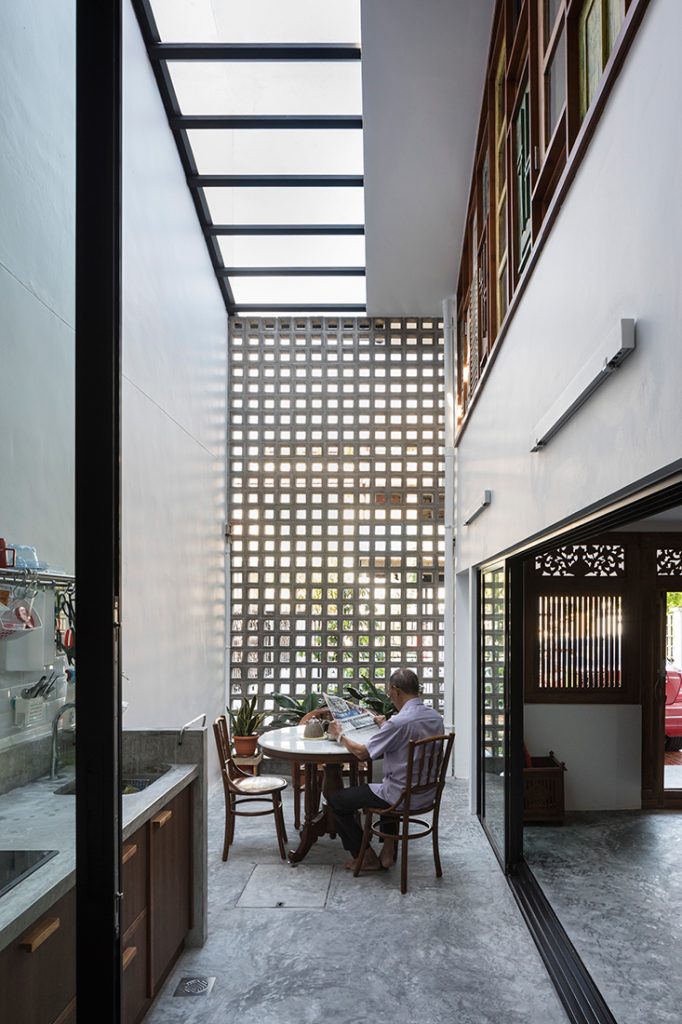 Despite the project’s small size, Goy and her team made use of BIM software to assist with design, costing and scheduling. “We wanted to test out the accuracy of translating a theoretical calculation to actual construction on site. Accuracy and timing were pivotal in the success of this project,” she explains. With the help of the software, the team was able to accurately calculate the quantities of materials required for procurement in Indonesia – which could only be done once.