Greymatters’ Hospitality For The Adventurous At JW Marriott Hanoi

Alan Barr from greymatters ruminates on his latest project for celebrity chef Akira Back: Akira Back restaurant and Smack-Dab bar at the JW Marriott Hanoi.

“This project is probably one of the most unstructured from a creative process that we have ever worked on in Asia,” begins Alan Barr, founder of greymatters, referring to his studio’s stunning new project for the JW Marriott Hanoi: Akira Back restaurant and Smack-Dab bar. 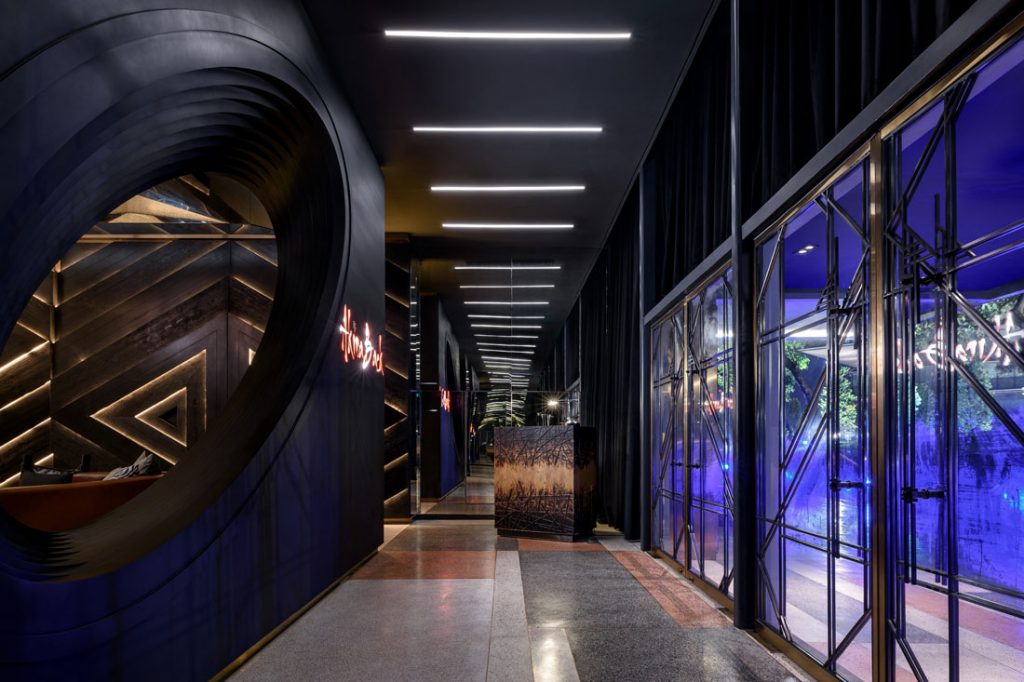 “The brief was very unscripted, not much written down, and no benchmarks or case studies to use as a frame of reference,” says Barr. “Chef Akira asked us to ‘go crazy’ and make sure that the venue was nothing like any of his past developments.” Akira Back was born in Korea and then raised in Colorado, where for many years he was a professional snowboarder, before turning his creative talents to the kitchen in the early 1990s. He forged a culinary empire with restaurants around the globe, including in the US, Dubai and now Vietnam.

“The hotel operations team asked us to create a venue the likes of which hadn’t been seen in Hanoi or Vietnam previously,” continues Barr. “The hotel management and F&B teams asked for us to push the envelope until it burst. So with respect to creative freedom we had no boundaries. Obviously, there are all the usual architectural, interior, compliance and construction issues, but for this mad-scientist experiment the gloves were off creatively!” 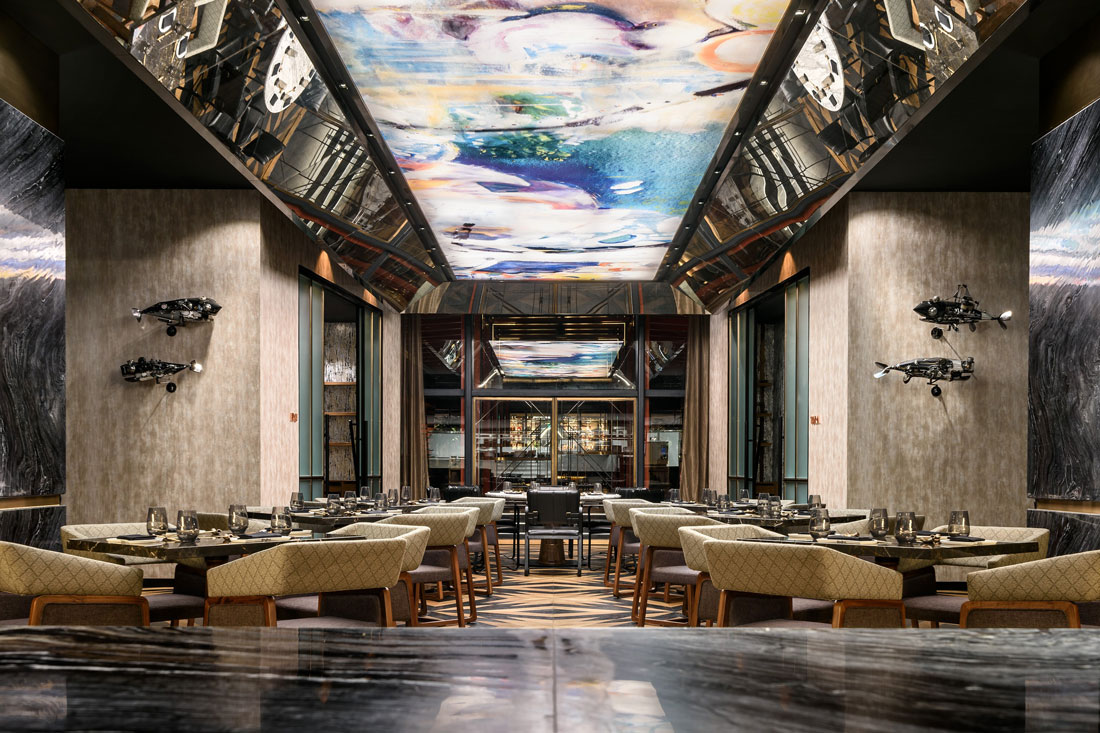 That said, there are design threads found in Back’s many restaurants. The main dining room at the new Hanoi outpost has a 21-metre-long barisol scrim lightbox with art by his mother, Young Hee Back, who is a constant collaborator with her son. This is the main centrepiece of lighting and art for the restaurant. Chef also has a custom line of crockery and plate-ware developed with porcelain-maker Legle from France, and many of his projects have an animal integrated into the design one way or another, including birds, monkeys and elephants.

“For our project we latched on to the tiger, specifically a white tiger,” says Barr. The hotel, JW Marriott Hanoi, which this project is situated in, was designed by Venezuelan starchitect Carlos Zapata and the building’s inspiration was a traditional Vietnamese dragon. “Chef Akira’s birth year is a Tiger and his last name, ‘Back’, translated to English, means ‘white’. So we developed a tiger-meets-dragon concept that materialised physically into our design,” says Barr. 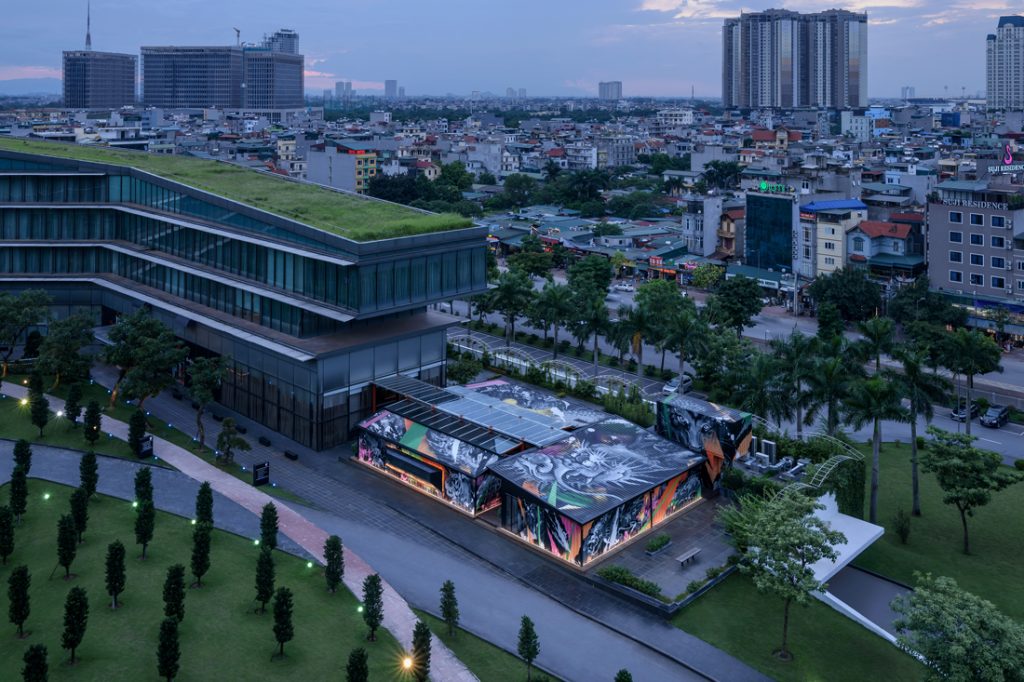 The Smack-Dab portion of this project is the exterior ultra-lounge that is built from seven upcycled shipping containers with an exterior custom art mural of tigers and dragons made by tattoo and street artist Steve Cross from Melbourne. “This was his largest commission ever in both square meters and number of cans of aerosol paint used,” says Barr. “It took Steve 33 days straight painting and over 700 cans of paint to cover all of the exterior surfaces.” 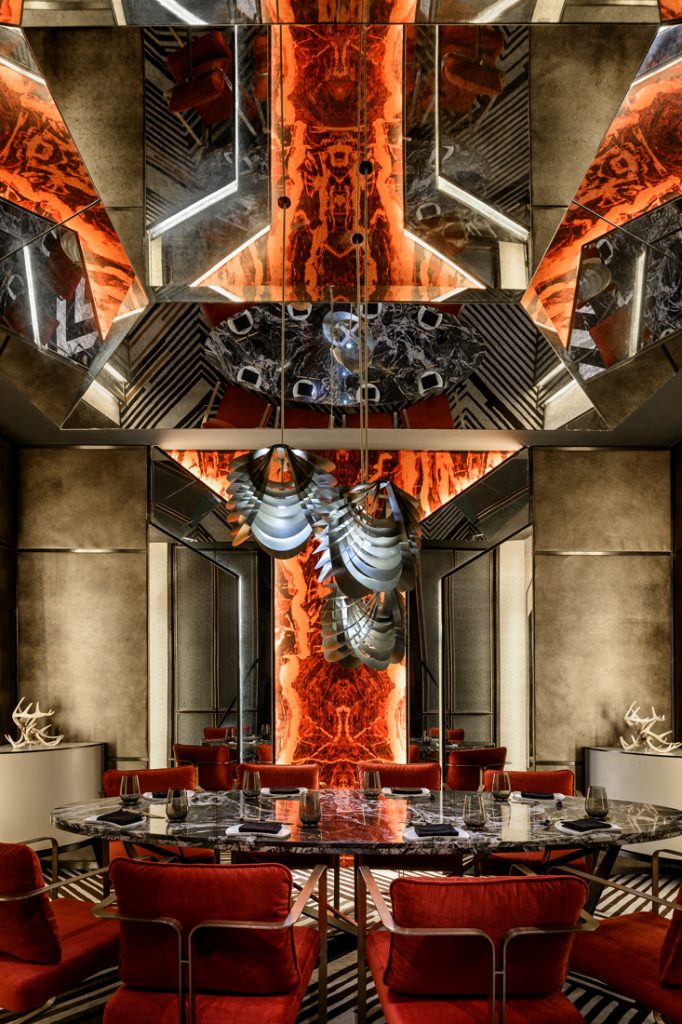 For the restaurant interior though, greymatters‘ approach was informed by Back’s technique. “Chef’s style of cooking, and specifically the plating of his dishes, is extremely graphic in nature,” relates Barr. “When a guest’s food hits the table the plates are stunning to look at and have extreme visual impact. So we looked at the DNA of his ingredients and latched on to the geometric structure of the fish in his dishes. The flesh has an incredibly ordered geometric structure of interlaced muscle, fat and connective tissue – this led us to create a graphic interior that is almost shattered, radiating arrays of mirror, glass, steel, wood and stone.”