Funan Preview: A Mall With A Civic Ambition

Soon to open, Funan is embedded with a great ambition to redefine malls and build communities. We previewed the building with CapitaLand. 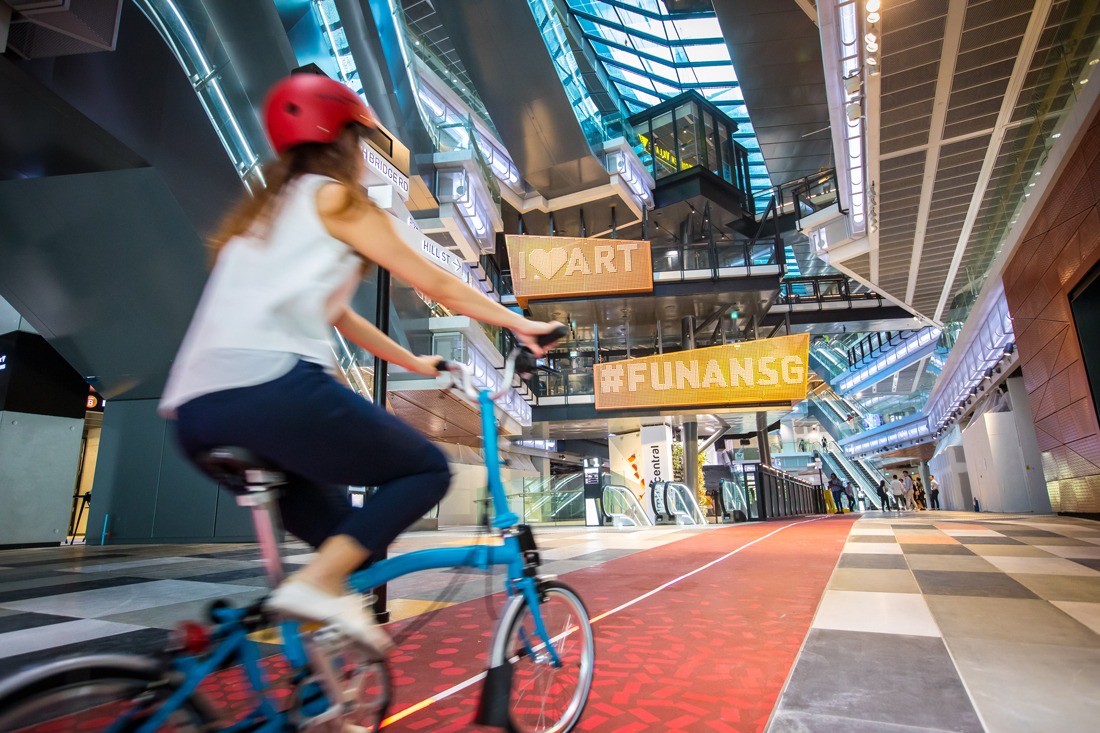 CapitaLand opened up Funan mall – though it is yet to be completed – to the media this week for a special preview of its architecture. The design team were not present (Woods Bagot is the lead design consultant and RSP Architects Planners & Engineers is the project architect); instead representatives from CapitaLand hosted journalists on a tour of the mall’s main features.

Its social media presence was one of the first points noted by the hosts. Since achieving its TOP (Temporary Occupation Permit) in April and releasing a façade photo, CapitaLand has apparently received numerous requests from Instagrammers to photograph the building. 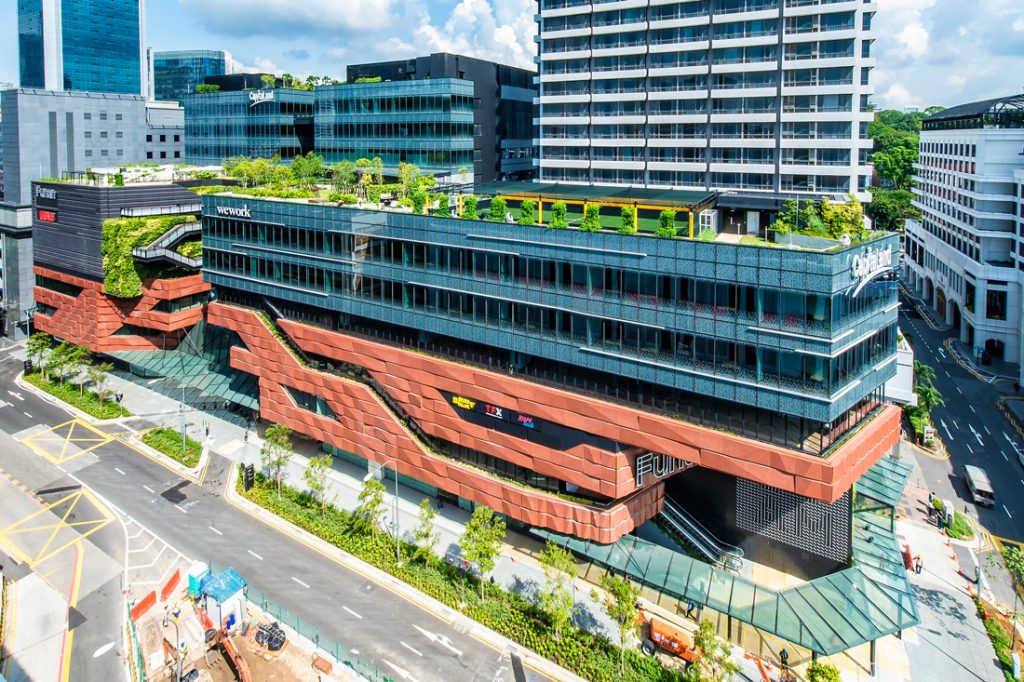 “Funan has gone to great pains to cultivate a community online,” said Chia Pei Siang, CapitaLand’s Vice President, Group Communications. “Of all CapitaLand’s malls, Funan has one of the highest followings on Instagram,” she added.

“Of all CapitaLand’s malls, Funan has one of the highest followings on Instagram.”

Is Instagram notoriety prior to a project’s completion a new litmus test for the success of the architecture? Or a signal of the consumption of architecture as a form of media?

That aside, no Instagrammers were present at the media preview, so our tour progressed without the inevitable delays that would have come with framing the perfect shots all the way from basement 2 to the rooftop garden atop level 10. 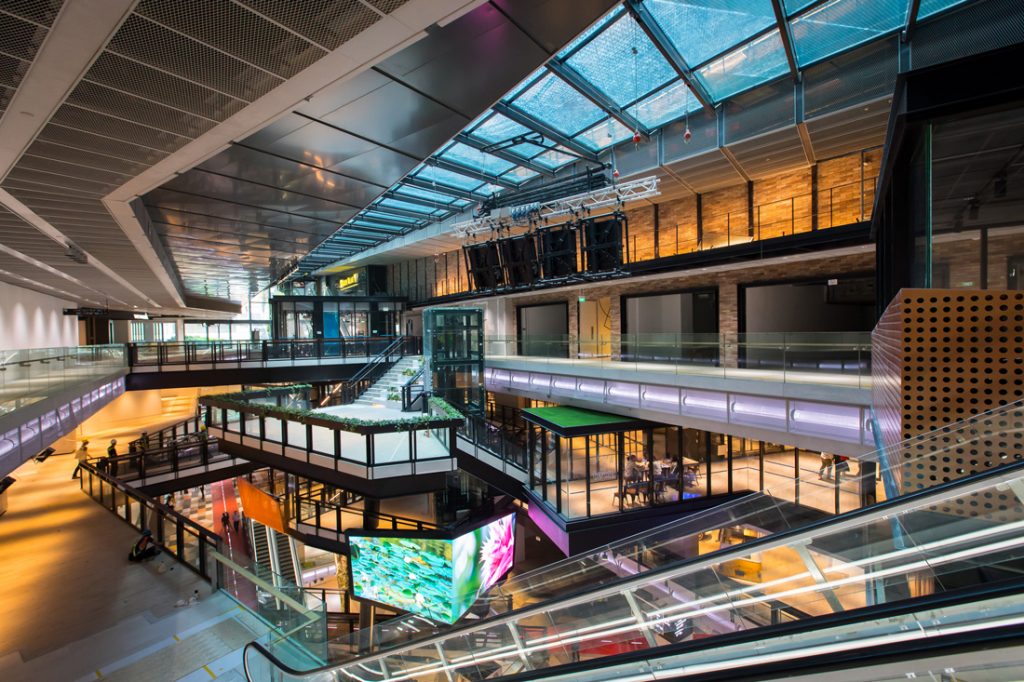 CapitaLand is presenting the new Funan (which replaces its demolished predecessor) as a mall that cultivates communities – IRL, that is. Said Chris Chong, Managing Director, Retail at CapitaLand, “As the retail landscape undergoes disruptions, the formula for a successful retail mall has to evolve as well. While a decade ago a mall [could] succeed largely on the merit of its tenant brands, today it must be able to anchor its own community of supporters and followers.”

He continued, “Consumers of today don’t just buy products or services, they invest their time and effort in understanding brands and supporting relevant causes. Against this backdrop, Funan is CapitaLand’s interpretation of the mall as a platform for meaningful and enriching exchanges beyond the transactional.”

“While a decade ago a mall [could] succeed largely on the merit of its tenant brands, today it must be able to anchor its own community of supporters and followers.”

This is epitomised in the centrepiece of Funan – the ‘Tree of Life’. This cluster of 20 retail pods (for a rotating cycle of special brand showcases and activities), event spaces, steps, resting spots, power-activated benches and link bridges rises 25 metres from basement 2 (where a climbing wall beings) to level 4. The fritted glass above it notions to the gentle cover of a tree canopy. 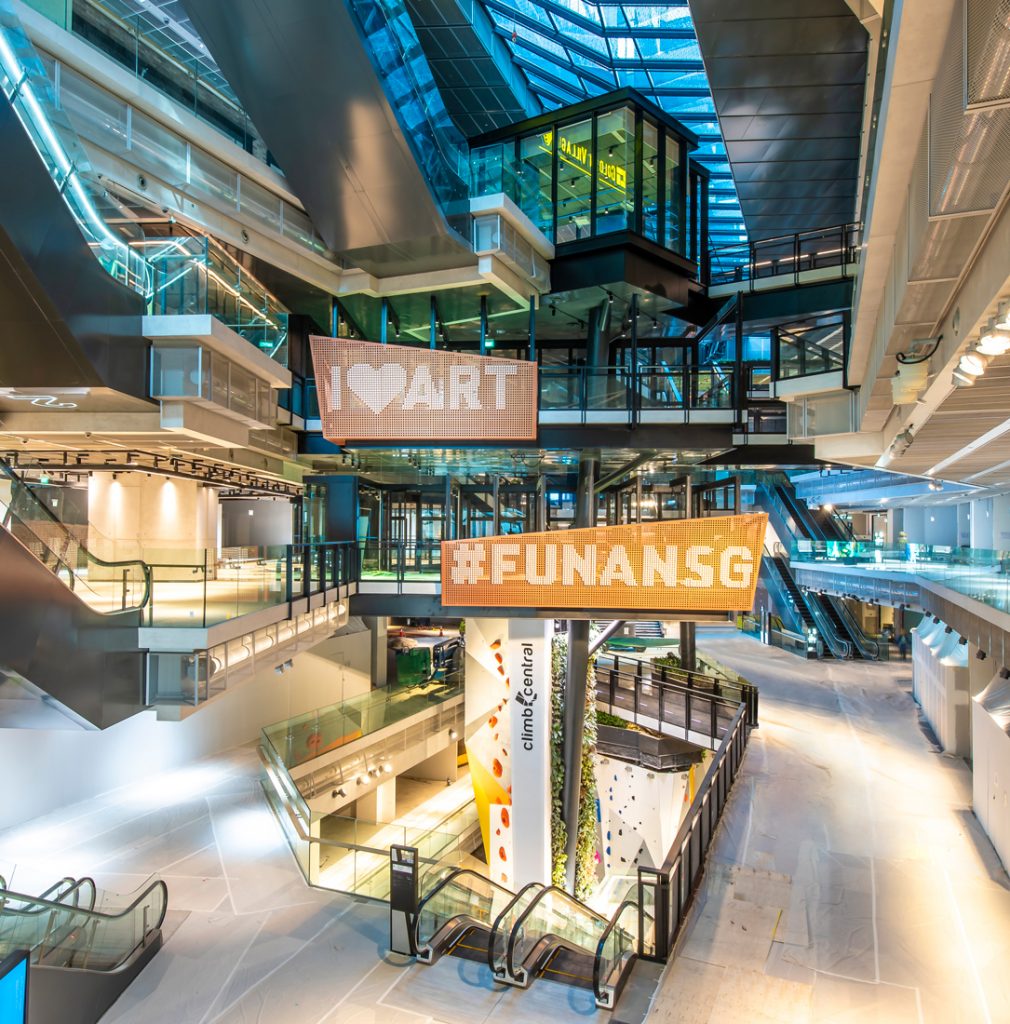 The provision of elements such as counter seating with wireless charging and seating platforms with power points will divert from the typical mall experience of being shooed away by security staff should one dare to sit down anywhere but in a tenant’s furniture setting.

CapitaLand sees the mix of functions and interest groups as the foundation of what will be the most energetic venue in the civic district.

Perhaps a defining feature of Funan however – at least in the public imagination – will be its indoor cycling path. Inspired by the National Cycling Plan and envisioned as primarily servicing Funan’s population of office workers, the cycling path veers inside – up the gentle incline that replaces the steps of the former mall – from North Bridge Road and runs 200 metres through the interior to a Bicycle Hub in the laneway beside Funan.

Motion-activated coloured lighting strips will follow cyclists along the length of the red pathway, which, explained CapitaLand’s representatives, will eventually be appended by slow-down strips and signage. Questions from the media about safety weren’t surprising. Given the extension of the red path down the exterior laneway that feeds off North Bridge Road, one might expect commuter cyclists to avoid the mall interior altogether until after parking. 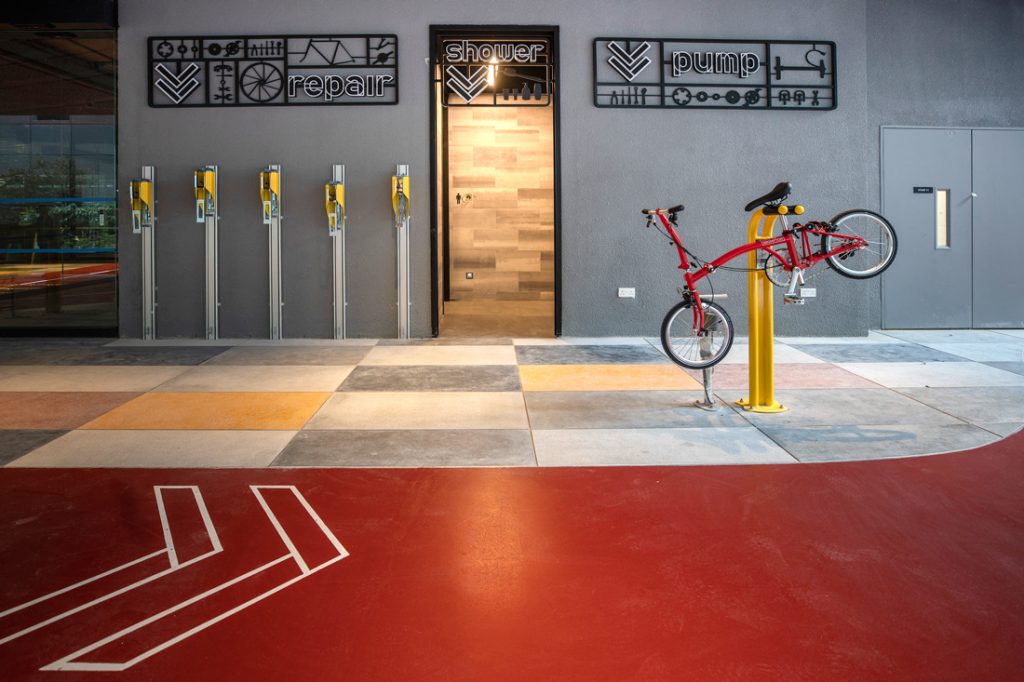 62 bicycle parks are provided on level 1, with another 104 in basement 3. The Bicycle Hub offers a bike repair and pump station as well as end-of-trip facilities such as lockers and showers. 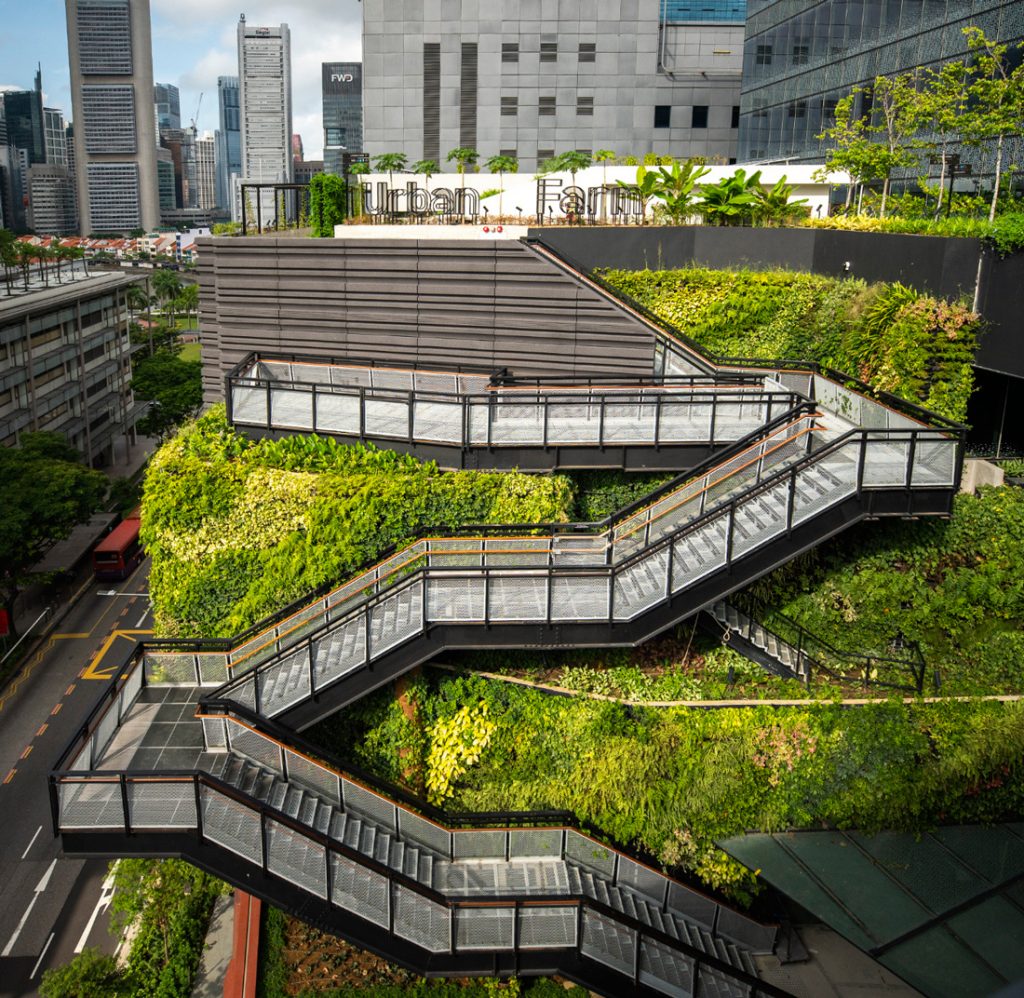 Funan’s offerings extend to a rooftop farm on level 7 operated by Edible Garden City (its produce to supply a restaurant tenant) and accessible by the public; a futsal court; swings and barbecues; and a publicly accessible roof garden atop level 10. The views reach Fort Canning in one direction and Marina Bay Sands in the other.

With a view to cementing the presence of Funan in the life of the civic district, CapitaLand has installed an interactive kinetic wall at the building’s primary façade facing the junction of Coleman Street and North Bridge Road. It was developed by lighting consultant Nipek with collaborators. 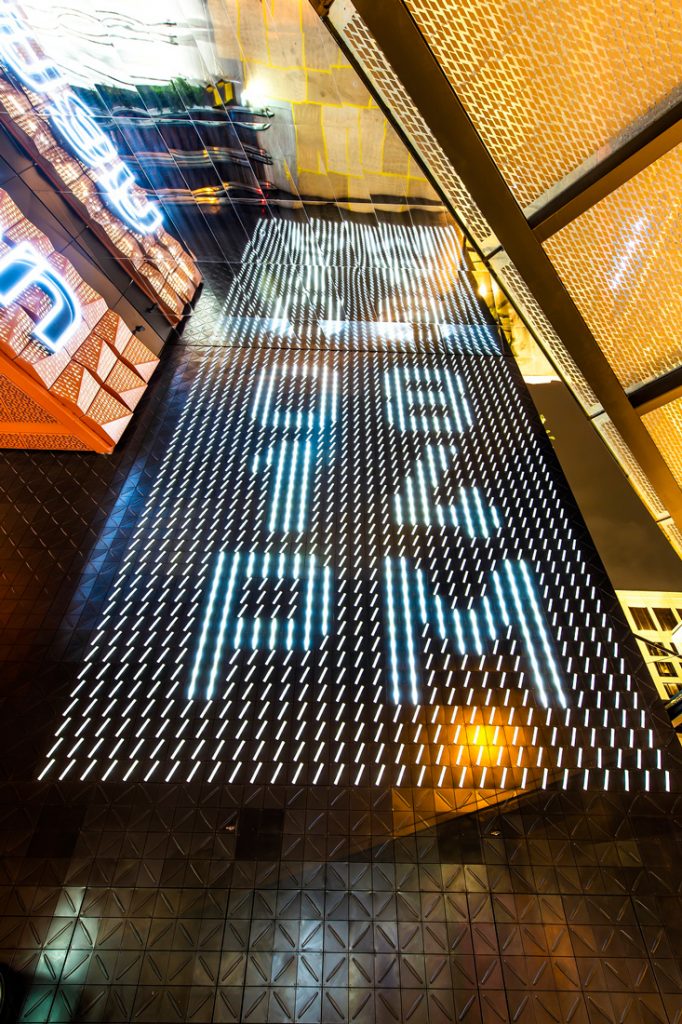 Pedestrians approaching from City Hall MRT will be able to read the time in an abstract composition of illuminated blades that can also be programmed to respond to bodily movement. A mirrored ceiling and a triple-volume space mark the importance of this zone, which CapitaLand has dubbed the City Living Room.

The retail and office components of Funan will open in Q2 2019, followed by the serviced residences in Q4 2019.

Read our previous report on the Funan concept (from 2016) here.

We will report on Funan again with input from the architects. Look out for our coverage in the coming weeks.