Marking The Passing Of Time At Formwerkz’s Grotto House

Is it the antidote to Singapore’s culture of newness? The reticent shell of the Grotto House by Formwerkz Architects disguises a dramatic, richly textured interior of framing and layering. 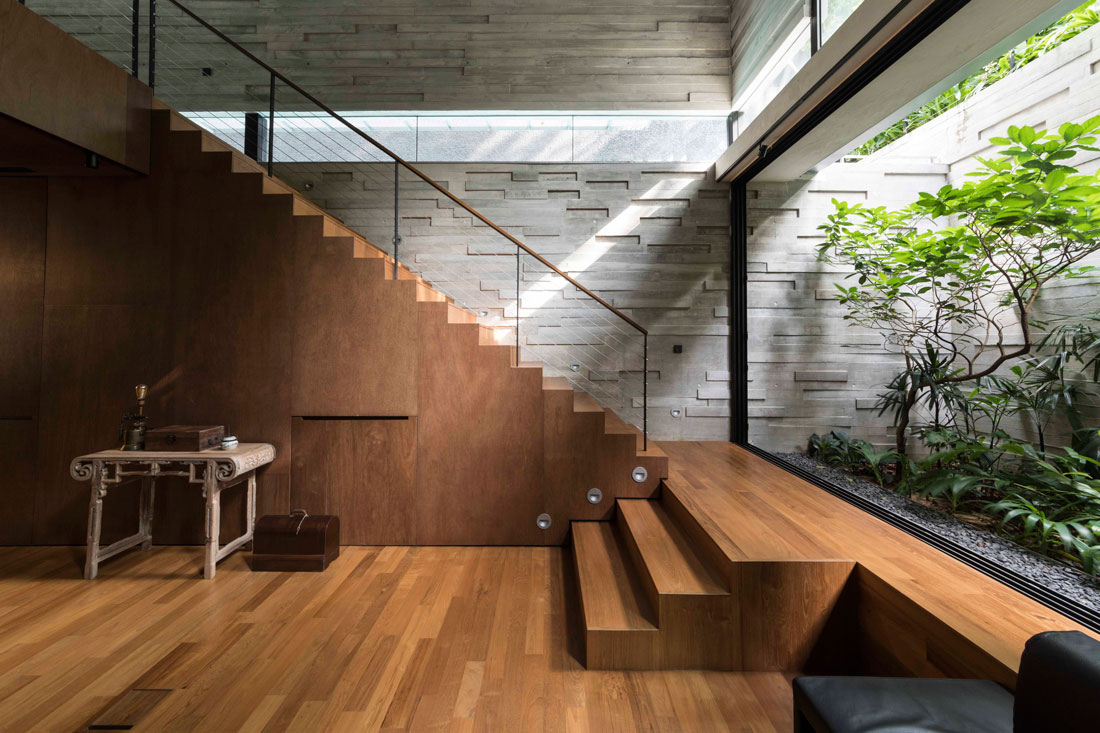 To enter a grotto or cave is to retreat from the world outside into a cocooning realm offering tranquillity and a sense of exploration. This reference perfectly suits the Grotto House designed by Formwerkz Architects.

“It comes close to what we imagined for the house, hoping it would capture the quality of space, light and intimacy associated with it, as well as the construction and materiality,” says Alan Tay, one of the firm’s Partners. 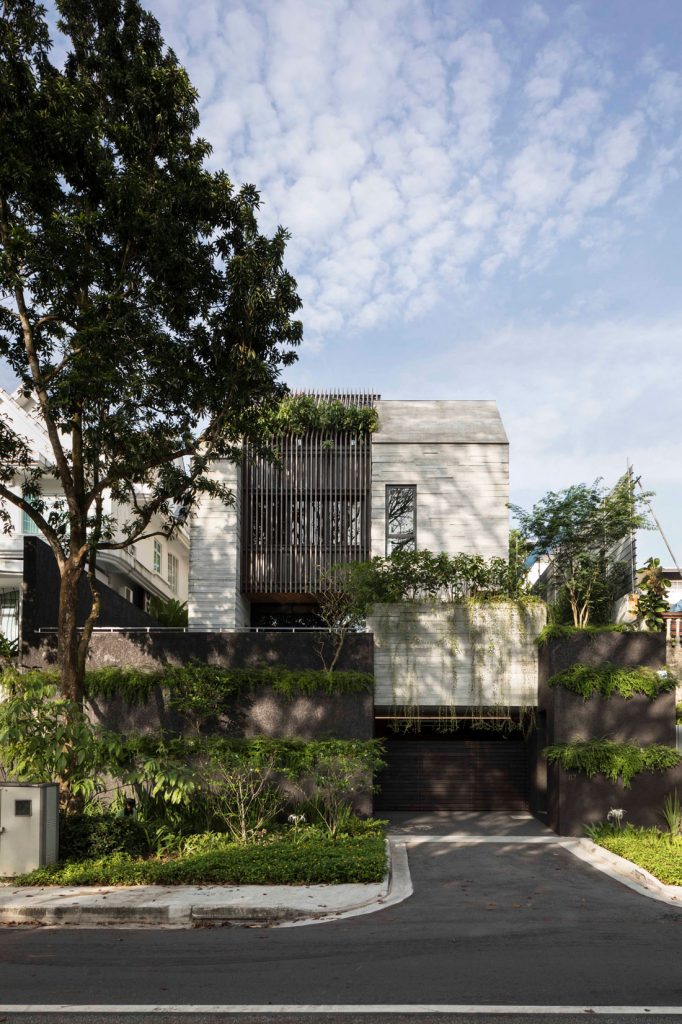 The house’s inward-looking design showcases the firm’s ongoing trajectory of what Tay describes as “a reimagining of tropical houses in highly urbanised Asian cities confronted with issues of privacy, noise and poor air quality.” A favourable method of “introverting” the house through highly original strategies makes the firm’s oeuvre exciting to watch.

The occupants are an otolaryngologist and a gynaecologist, their three children, two grandparents and two helpers. “The husband is also an avid collector of things: cars, furniture, records, watches, operating theatre lights, et cetera; he appreciates the richness of things that age with the passage of time,” says Tay. 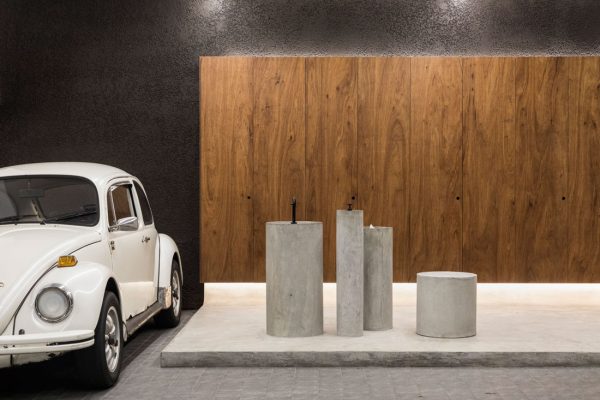 The home’s material palette reflects this fascination. “We were fortunate to have clients who embraced the idea that beauty lies in the stories within, and were receptive to the use of materials that revealed the traces of time and life as they age. This is significant in a society that is too often consumed by the culture of newness,” says Tay. 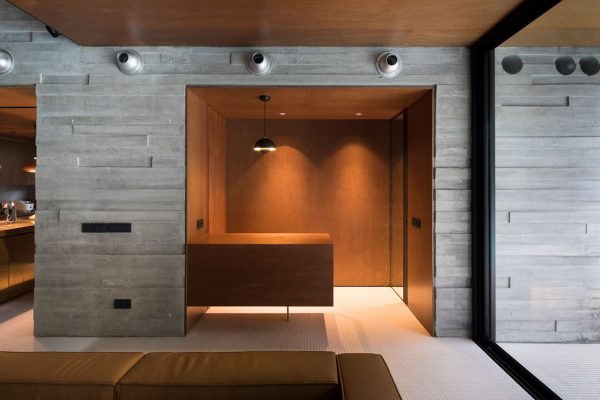 Board-form concrete defines the house externally and internally – the horizontal bands of rough texture endowing the surfaces with a three-dimensionality and perpetuating a cave-like ambience.

Timber, which screens the front facade in rhythmic embrace and wraps the interior walls and ceilings, is the deuteragonist, bringing warmth to the grey interiors. The marine plywood cladding chosen for the interior registers moisture differentially over time, accentuating each panel uniquely as it ages. 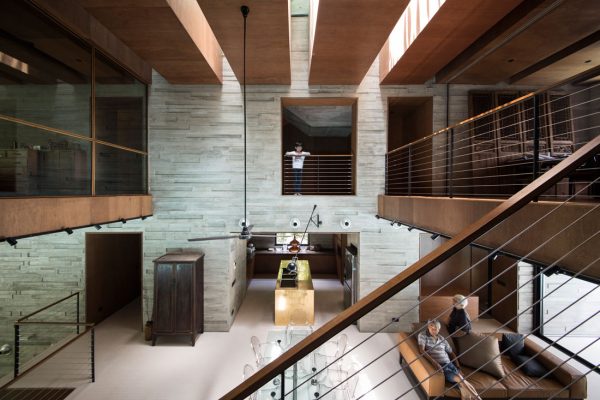 The golden shimmer of brass on the kitchen island and bar counter surfaces, on a custom-designed towel rail in the children’s bedroom, and on door striker plates, injects a dose of vintage glamour.

Underfoot in the dining and kitchen, Tay surprises with the choice of small white mosaic tiles, which continue the story of tactility out onto the pool deck as a refreshing sheet of white against azure water and sky. 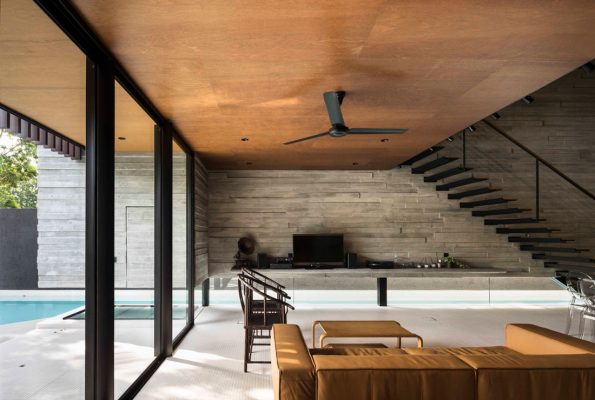 The building’s reticent shell shields noise from a nearby highway, inquisitive eyes and the elements. Apertures on the front facade are dutifully screened while openings in the south facade (facing a nearby neighbour) are carefully calibrated. A narrow slit window above the lap pool brings light in as it creates the illusion of levitation.

Within, an ingenious arrangement of spaces encourages communication among family members. Floor plates are staggered over three storeys in a balconied manner such that there is visual and aural connectivity from the basement to the first and second storeys. 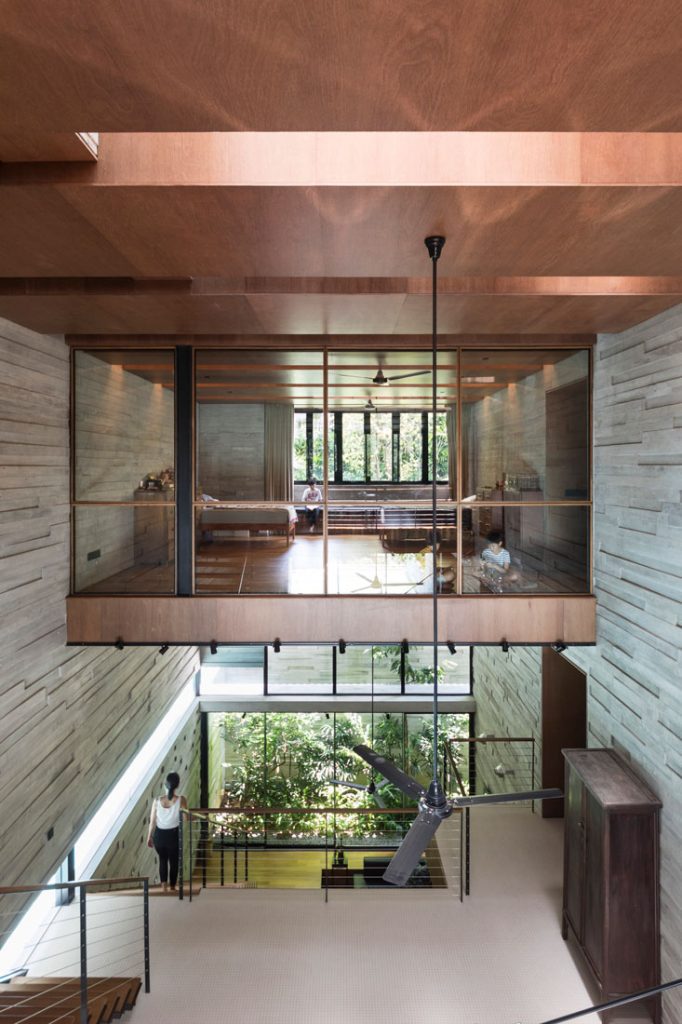 A glass wall in the children’s bedroom on the second storey offers glimpses to the study across the atrium, and down to the communal spaces where the grandparents spend much of their time just outside their bedroom.

“The layered configuration allows us to weave a rich tapestry of spatial experiences within a compact layout. Private, contemplative nooks for individuals are interspersed across the generous, voluminous communal spaces within the house,” says Tay. But also, the staggered atrium connecting the basement to the upper storeys draws up cool breezes via the stack effect. 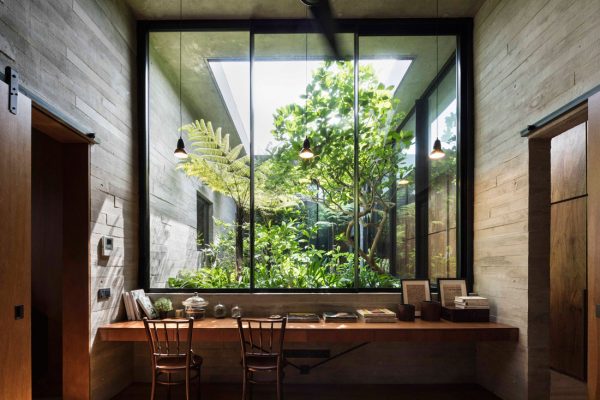 The most private space is the master bedroom suite on the uppermost level, surrounding a garden courtyard formed by a band of alternating concrete planters and linear skylights. These diffuse daylight into the communal spaces similarly to how light filters into a cave through a light shaft. 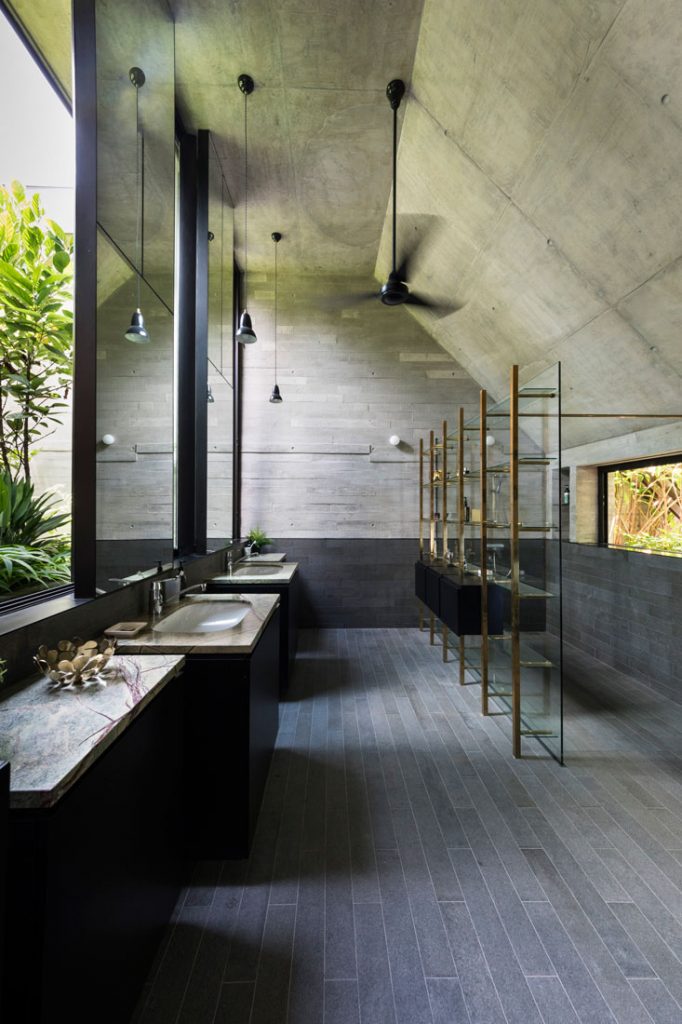 “Not unlike many of our introverted houses, nature is woven into or appropriated or abstracted to be part of the indoors,” says Tay. “The shadows of the trees find their way into the heart of the house.”

The conceptual rigour in this project is strong and consistent, resulting in engaging materials and encounters. Says Tay, “The house celebrates the dichotomy of having both qualities of openness and privacy in a singular space. The spaces are intimately enclosed but remain framed with a view of the next layered space. With every turn, a new space is discovered.”

This article was first published in Cubes 94: We Dwell.