Emma Maxwell designs ‘Find your Lucky Star’ for The Marriott Hotel Group, reflecting the transitory effect dining can have on the senses.

A transitory installation for a fleeting experience – that was Emma Maxwell’s recent dining room installation at the Sheraton in Kuala Lumpur. At the basis of the installation was a simple, but profound question: How do we make our dreams come true? Maxwell’s designed response suggested that seeing the world differently is a critical part of the answer.

She also capitalised on the pop-up format to explore the notion of ceremony associated with dining, and reflect the transitory effect dining can have on the senses – from the palate, to the visual and aural experience. “To do so in such a dramatic and theatrical fashion in a permanent restaurant is somewhat challenging,” says Maxwell. “The pop up is truly a medium that is liberating for both designer and chef alike.” 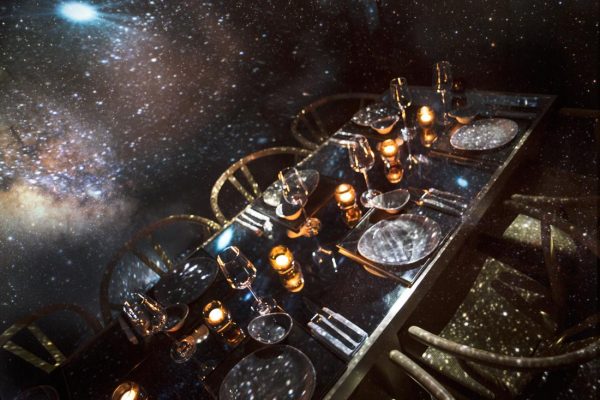 The installation was presented as an ‘other’ world within a muted box. Guests ventured into a fantastical scene that initially didn’t make sense to the human condition, suggests Maxwell. Diners were given the impression that they had been placed ‘upside down’ in an evocative landscape, where the clouds and the treetops composed the floor and walls. The ceiling, however remained a dark intangible void. A custom made three-metre-long mirror-topped table and the specially handcrafted glass ‘cloud’ light fittings created an otherworldly aura. 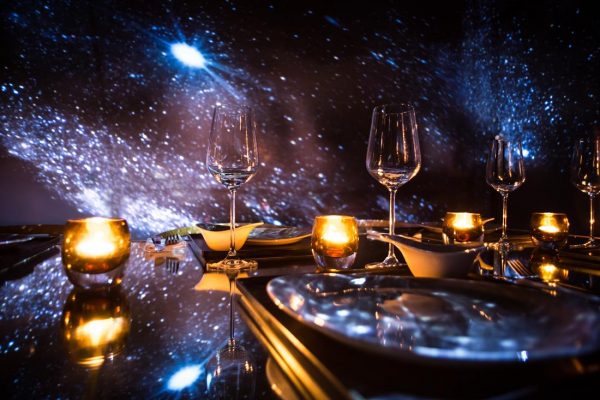 The environment morphed during the course of dinner. By the time the third course was served, the dark void overhead began to shimmer to life, presenting an emergent night-sky scene. During dessert, shooting stars would arc overhead, presenting the opportunity to wish on a lucky star. The film that enveloped the space was designed by celebrated Australian Film Director Damon Escott. The visuals were accompanied by a sound scape by award-winning Australian screen composer and music producer Ben Rosen. The six-course menu was conceived by Singapore-based chef Francois Merlimood.

Photography by Damon Escott. Watch a video of the installation at Emma Maxwell’s website.