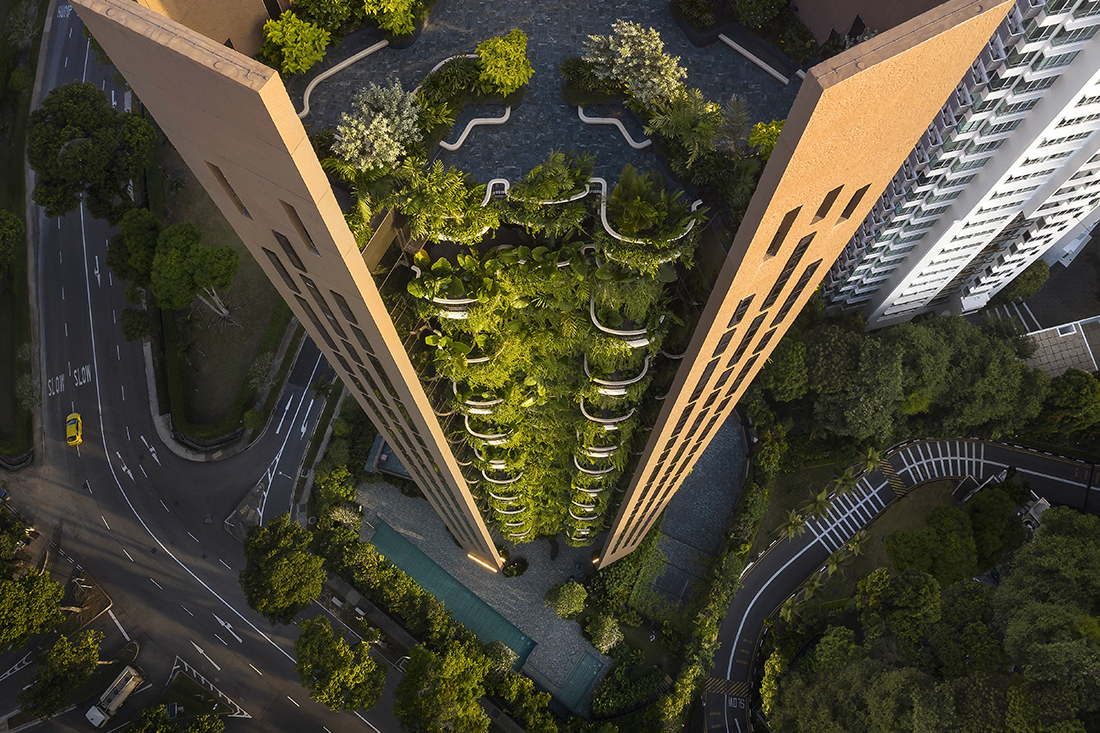 Singapore has seen its fair share of foreign architects making their mark with buildings identified by sweeping formal gestures. Unfortunately, few have successfully contributed buildings—particularly housing—that are sensitive to the country’s tropical climate. Heatherwick Studio’s design of EDEN is an anomaly.

The luxury residential tower is an architectural antonym to the ubiquitous enclosed, steel-and-glass apartment building found not just in Singapore, but around the world. “Our terror as a design team was to make something that felt like it had come from a different context,” says Thomas Heatherwick, the studio’s founder and design director.

Formally, EDEN reads as a stack of delightfully overgrown gardens in shell-like balconies collectively pushing apart blades of façade walls. Experientially, each apartment is a celebration of the elements. A central living area anchors each apartment which has 270-degree views, including an impressive panorama of the city afforded by a verdant balcony. Notably, openings all around allow for a generous dose of cross-ventilation.

“We had visited an old apartment project that was very ugly to me, sort of brutal. But when we went into the apartment, suddenly it felt different. I was trying to figure out why and realized that there were windows open on either side of the apartment and the cross-ventilation was making you feel alive!” Heatherwick shares. “That was our a-ha moment.”

The design team, in collaboration with RSP Architects Planners and Engineers, transposed the late Prime Minister Lee Kuan Yew’s “City in a Garden” vision into “A Home in a Garden” concept where one can, in Heatherwick’s words “really enjoy tropical weather and not live despite the tropical climate”.

Each apartment’s pre-cast terrazzo balcony is lush with tropical plants embedded in the slab—not as patronising “visual garnish” in pots. The view out into the cityscape is whimsically interrupted by a curtain of creepers hanging from the balcony above. These double to s. Greenery is also spread out at different corners of the apartment through smaller-sized planters. The result is a genuine sense of being in a garden no matter which floor you are on.

Heatherwick wanted to expose residents to the sights, sounds and smells of nature even if they were 22-floors above ground. “Luxury to me is hearing the birds, hearing the rain. Singapore does incredible rain. But when you’re in a double-glazed, sealed box, you don’t hear the rain. What a shame! It’s one of the most romantic things!”

EDEN, which was six years in the making, has been conscientiously crafted in a bid to “make each element feel special”. Beyond polished terrazzo balconies, internal finishes like imperfect oak parquet floors (painstakingly negotiated to pass building codes), slate decks and rounded stone surfaces bring an inviting sensuality to the apartments.

On a larger scale, the team cast a 3D abstraction of Singapore’s topography onto the concrete “stilts” that support the building. “It was affordable and efficient to use concrete, but we didn’t want to do another toothpaste-coloured building. How can we make a building that is warmer and more organic in its emotional effect on people?” says Heatherwick. He likens the texture on the concrete to a unique thumbprint of the city applied on the building’s façade.

“When the topography catches the light, it looks more silky than I thought it would. It’s a bit like when you have a wet, sandy beach and the waves are coming in and washing out, and create a unique sandprint.”

There is an unmistakable humanism and sense of romanticism in the way Heatherwick approaches his projects, and not without reason.

“As I became more aware of architecture, I found that it was astonishingly craft-less, untactile, cold in spirit and ungenerous at a human scale. It wasn’t specifically engaging with the emotional experience people have when they encounter buildings,” says Heatherwick.

“In one sense, EDEN is, for me, a prototype and research project for testing out ideas, some of which are equally valid for housing projects at whatever scale. I think we jump into big buildings with big ideas but lose the humanity of it all.”