Tipped to become Australia’s most densely populated precinct, Sydney’s Green Square required a truly memorable gesture for its community hub. The Library and Plaza redefines the meaning of architectural literacy with its incredibly visual and graphic structures. And it also happened to snag INDE Gold in The Learning Space category, partnered with Living Edge. 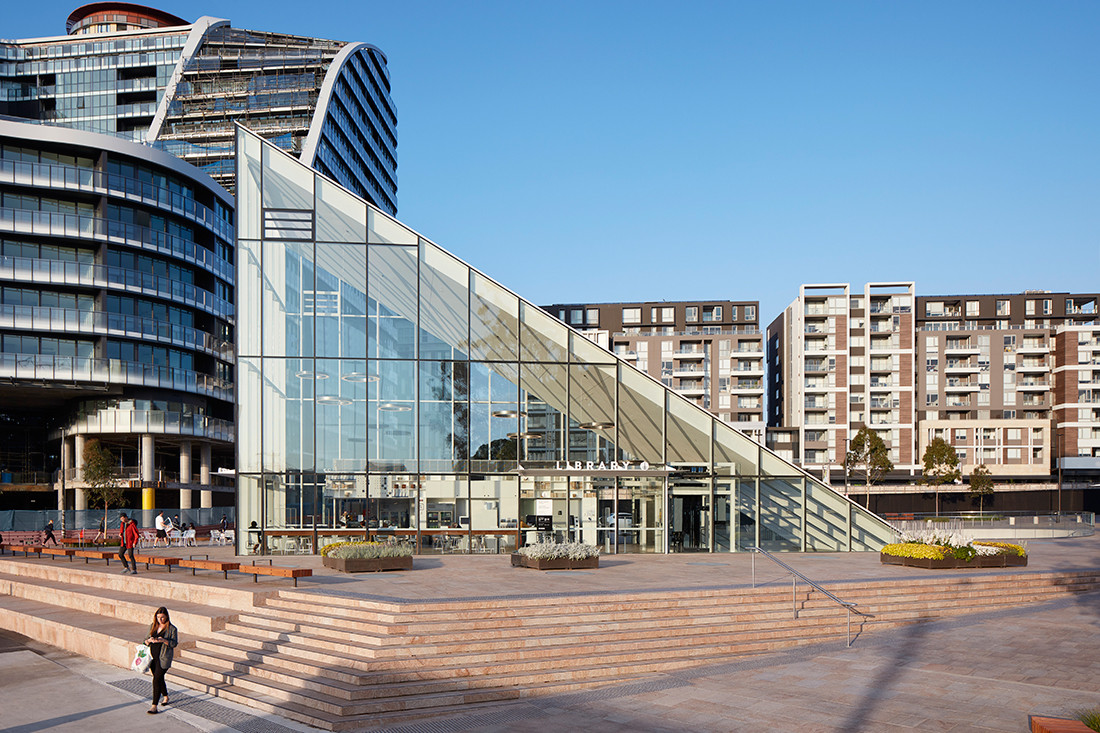 Libraries have evolved from being simple repositories of books to providing civic spaces that support more inclusive societies. Offering comprehensive services for all ages, libraries help connect people, build communities and facilitate lifelong learning. Green Square Library and Plaza, opened in September 2018, is located in what is set to be the most densely populated urban area in Australia. Designed by architecture and urban design studio, Studio Hollenstein in association with Stewart Architecture, the library is an accessible and non-prescriptive space in the heart of Green Square – a 278-hectare development that will have an expected population of 61,000 residents by 2030. The library is an important community amenity for residents of Green Square. Physically, it provides a book collection, community space, meeting rooms, children’s area, café, computers, music room, study area and even workplace. But more valuably, it offers a home-away-from-home for those who live in high-density apartments – a place to go, to connect, to socialise and to learn.

This is reflected in the demographics of people who have predominantly used the library since it opened: parents and grandparents with children under five years, new immigrants to Australia, and local and international students who attend schools and universities in the local area. It is also expressed in Studio Hollenstein’s approach to the design of Green Square Library, in creating a warm, welcoming, democratic space. “We are very interested in how architecture can foster community. What a library can do for society, as well as people individually,” says Studio Hollenstein director, Felicity Stewart. The studio won the commission for Green Square Library through an anonymous international design competition run by City of Sydney in 2012. The brief called for a plaza and a library, and “the winning move”, as Stewart describes it, was to create a subterranean library, leaving the 8000-square-metre plaza open for programmable outdoor space. While most of the library sits beneath the plaza, four geometric connections provide a visible interface. A rectangular tower and glazed triangular prism rise skyward, while a circular garden and trapezium-shaped amphitheatre recede down. The design team used these elementary shapes for legibility, both in the architecture of the library and its interior design. “We thought about literacy at a visual, graphic level. The building is highly identifiable in its forms and the shapes are a way to learn public space,” says Stewart.

Both the triangle and tower provide entrances to the library. The wedge-shaped pavilion accommodates a café, information point, news and magazine section and self-check-out machines. The six-storey tower stacks separate community and library functions, including a reading room, computer lab for teaching (coding, robotics, software and digital literacy), a music room for practice and performance (instruments are available for rent), and an aptly named multipurpose Anything Room popularly used for kids’ parties, yoga classes, board meetings and think tanks. Each level exists as a single, open room with floor-to-ceiling windows, providing an overtly public space. In contrast to the clarity of these spaces, the 2300-square-metre subterranean library is open and free-flowing, circulating around a central garden. The shape of the library is dictated by a light rail easement and historical coal line on either side, and the ceiling rakes with the level of the plaza. There are meeting rooms, bathrooms, bookshelves and computers at one end, and an outdoor amphitheatre at the other, with steps that double as seating for community events. Studio Hollenstein wanted the library to feel open and ambiguous; one that people could incidentally wander into and that does not prescribe how it is used. To achieve this, the layout is loose and informal; design features are playful and encourage exploration; and timber joinery and primary colours are domestic and warm. Thirty-nine skylights puncture the plaza to bring natural light inside, and the glass-encased garden provides a visual connection to the sky and is accessible for reading and playing outdoors. A bookshelf wraps around the perimeter of the library to create more internal room for people to be within the space. Various seating arrangements cater to students, workers, readers and researchers. This includes armchairs, modular furniture, stools and benches and computers for digital access. Reflecting the evolution in contemporary libraries, Green Square Library is a vital community space for the benefit of individuals and the greater good. “The project is a celebration of the potential of public space and public architecture and what it can mean to an emerging community,” says Matthias Hollenstein, director at Studio Hollenstein. “Libraries play a unique role in our cities as highly democratic spaces. Here we designed an urban living room for all to share and to come together.”

This article originally appeared in issue #77 of Indesign magazine – the “Knowledge Economy” issue.

.
Thank you to Living Edge – The Learning Space partner of the INDE.Awards 2019.