Located in the Melbourne suburb of Southbank, Australia 108 has been officially ‘topped out’ with its roof completed and its glass façade now reaching its highest levels. It has taken five years to hit this milestone and significant piling work since the construction was started in November 2015.

Builder Multiplex will still need to complete the remaining apartment interiors as well as the building’s eyecatching Starburst amenity spaces, which includes two infinity pools sitting 210 metres above the street. The building will be fully completed by the end of the 3rd quarter this year. 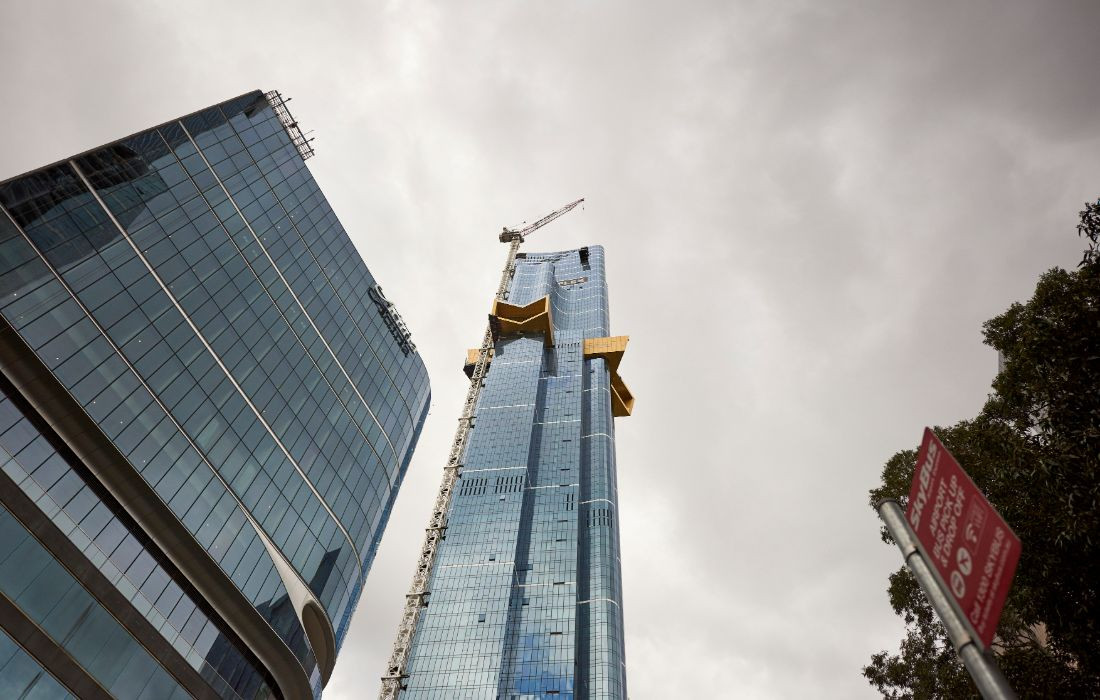 Chief Executive at developer, World Class Global, David Ng said the topping out of Australia 108 was a hugely fulfilling moment and a special moment for Melbourne’s skyline.

“Over the past five years, Australia 108 has steadily been growing on Melbourne’s skyline. Now, we are immensely proud to announce the project has officially gone where none of its neighbours have been before – we have completed the structure,” Mr Ng said.

Karl Fender, founding partner of the project’s architect Fender Katsalidis, said this milestone marked another extremely satisfying achievement for the firm, which also designed Australia 108’s towering 88-floor predecessor, Eureka Tower. “To finally see Australia 108 and Eureka Tower side-by-side on Melbourne’s skyline is a great, albeit humbling moment for our team. The strong, visually symbiotic relationship between the two neighbouring towers has now, after Eureka’s completion 15 years ago, been realised. 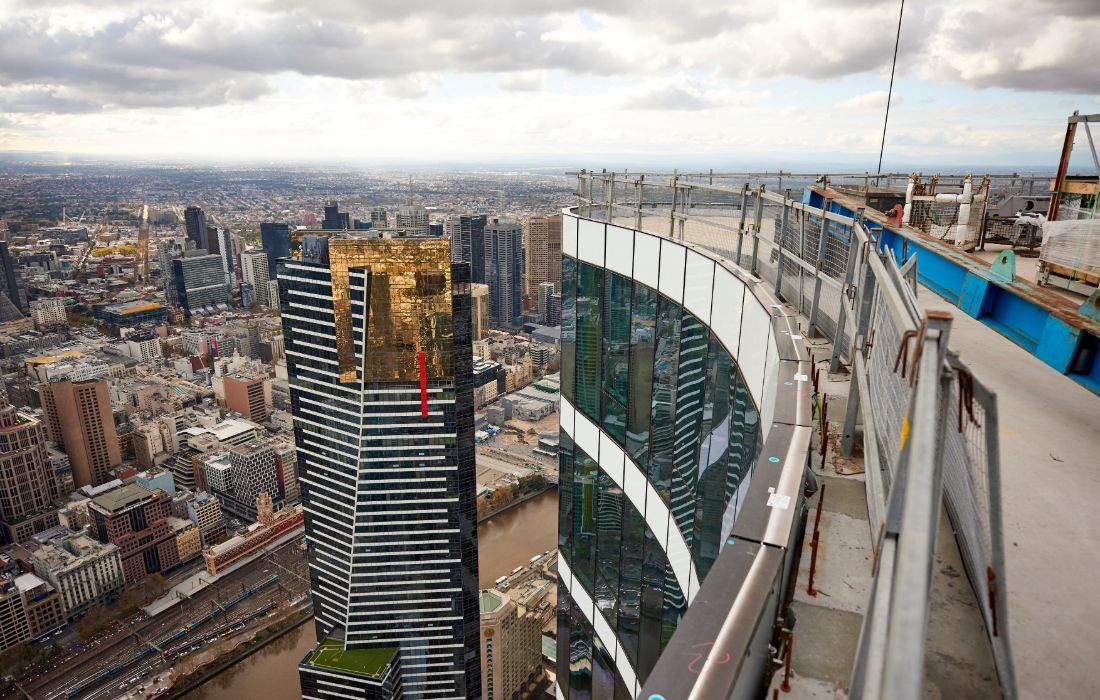 Multiplex, who led construction of this new landmark needed to utilise new techniques developed specifically for the project, creating purpose-built platforms which builders worked safely on to install the golden panels of the Starburst that were delivered by crane during the middle of the night.

Multiplex Regional Managing Director, Graham Cottam, said the build from many metres below ground to the top had required innovation and had proceeded without any major issues. “This is a build that has never been attempted in Australia before – the challenges in getting people and materials to such height required innovation, as did the construction of the cantilevering Starburst,” he said. “From a construction standpoint, Australia 108 is the result of a lot of careful planning and innovation and we’ll carry a lot of new techniques over onto new projects moving forward.” 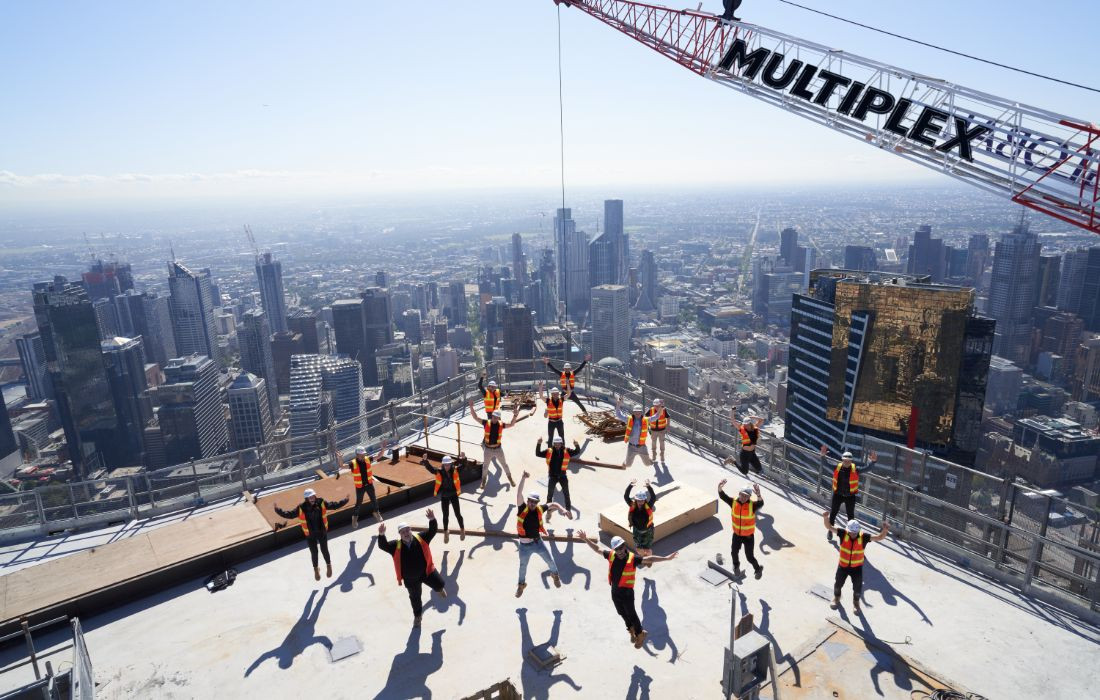 One consideration the build team successfully addressed prior to topping out at Australia 108 was how the structure would cope with gale force winds of up to 140km/h. the solution, underneath level-100 of the tower has been fitted with a 300,000-litre damper tank which will act as a counterbalance.

Residents have already started moving into Australia 108 from 2018 as part of a staged handover of lower level apartments and one and two bedrooms up to level 67 are also still available for sale but there is still a limited selection of the premium 3 bedroom Cloud Residences, luxury apartments from levels 72, the majority of which sit higher than most of Southbank’s surrounding buildings. We’re told, they offer quite a view to those that can afford it. 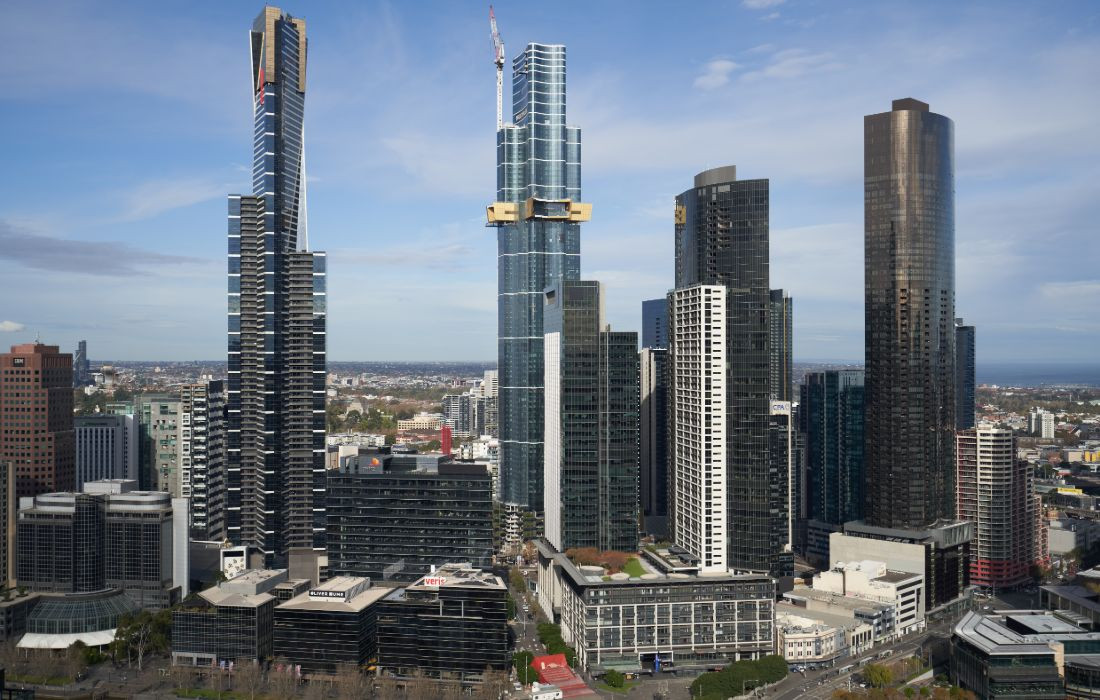