Anonym Takes The Path To Simplicity With A Bangkok Home

bAAn, the new project from Bangkok-based design firm Anonym, is a home first and foremost. In Thai, that’s what the word baan literally means, though the stylised version has a particular meaning here. “bAAn actually references the name of the owners, so it’s ‘Baan Andy and Note’,” explains Phongphat Ueasangkhomset, who co-founded Anonym with Parnduangjai Roojnawate in 2016.

Ueasangkhomset and Roojnawate have developed a reputation for designs with open spaces and natural light – strongly evident in the 500-square-metre bAAn house in Bangkok.

The brief from the owners was simple: they wanted a new three-bedroom house close to Note’s parent’s home, with a clean, uncluttered and Japanese-influenced style. The original house on the site was demolished, and the new building orientated east, though the existing swimming pool was retained. Indeed, it features prominently in the new layout, with the flowing living and dining area facing the water directly, with pool views possible from the study as well.

As well as its embracing of the indoor-outdoor flow that is such a feature of South-east Asian homes, a main characteristic of bAAn is the muted colour palette of black, grey and brown – tones that begin at the front profile (wooden panelled gate, black wall, and concrete driveway) and continue inside to the counter tops, black-accented glass staircase, and bright white floors and walls. They are only offset by a speckled sofa in the lounge. I ask if this was the designers’ choice, or the client’s.

“We analysed the character of the owner, who really liked black and grey, but then – because this is a home after all – we decided we needed to create a residential sense, adding wood as a warm counterpoint,” Ueasangkhomset explains. It all adds volume to the sense of calm and openness bAAn exudes, with the covered car park resembling the underside of a traditional Thai stilted house.

.
The eastern orientation means in the morning the floor-to-ceiling windows facing the pool flood the home with sunlight, while a wall blocks excessive heat later in the day.
. 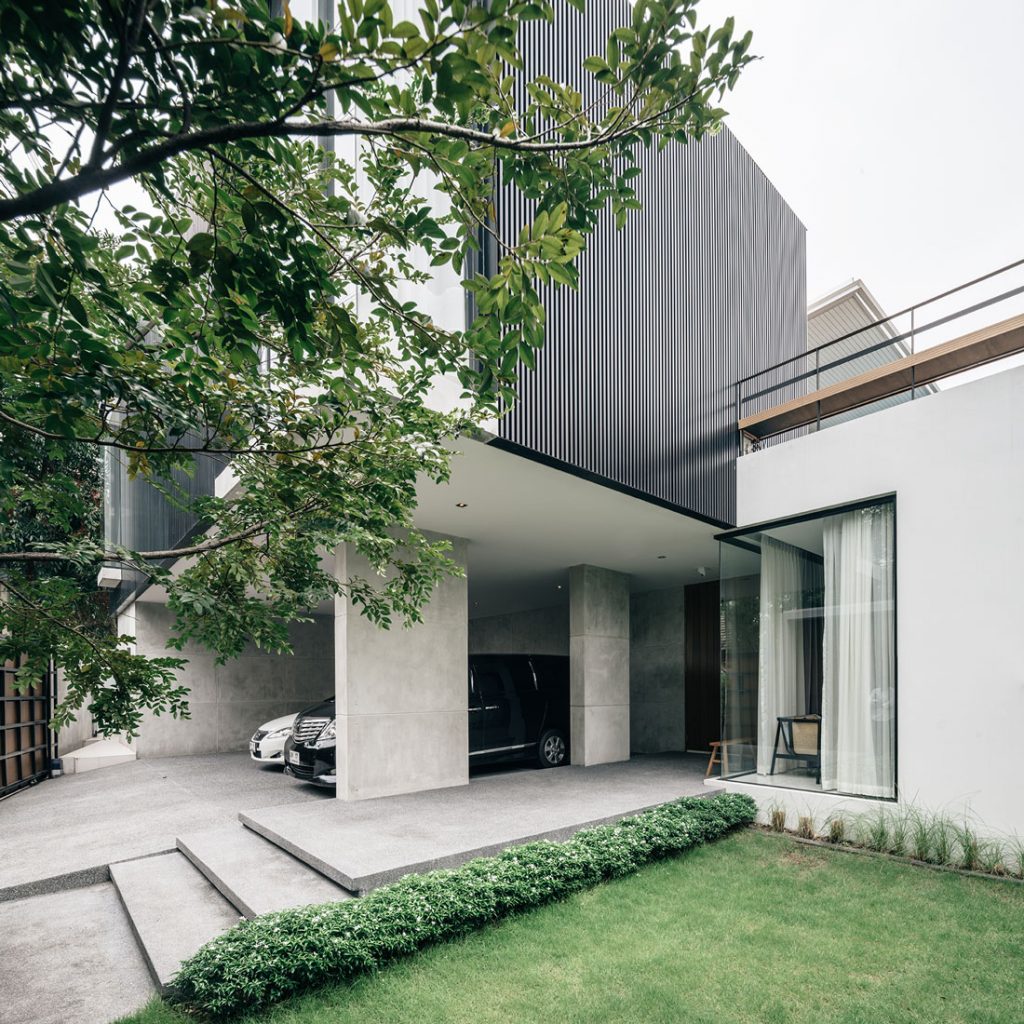 While the concept was minimalist, there were obstacles encountered along the way. “The most difficult part was implementing our open-plan design, and explaining to the contractor how our architecture functioned. We had to meet with them many, many times,” says Ueasangkhomset.

However, the angular design and stark finish remain the shared realisation of both client and architect. “We like simple forms and clean architecture,” says Ueasangkhomset, “while Andy and Note really wanted something unique presented in a neat and simple form. We achieved this through the combination of the materials selected – wood, concrete and aluminium – and analysing the character of the owner by talking, observing and discussing, then translating into a design.”

.
“The most difficult part was implementing our open-plan design, and explaining to the contractor how our architecture functioned.”
– Phongphat Ueasangkhomset of Anonym
.