An expert in residential and hospitality interiors, Alexandra Champalimaud has a keen eye for design enriched by a deep understanding of local history and a sense of place. Having established her New York-based firm, Champalimaud, over 30 years ago, Alexandra has been tirelessly expanding her extensive design portfolio with a roster of renowned commissions such as the award-winning Algonquin Hotel in New York and the Waldorf Astoria. Despite and because of her international experiences, Champalimaud remains profoundly attune to the unique conditions of every project, executing designs that exhibit a keen understanding of their surroundings. With her latest hospitality project, the Four Seasons Jakarta, Champalimaud discusses her firm’s comprehensive design process for the hotel. How do you approach each of your projects? Is there a systematic brainstorming process that you follow before you begin design or is the approach to every project different?

Every project requires a different thought process, depending on what the requests of the client are. There are numerous factors we take into account before starting each project, such as respect for local cultures and traditions. With the Jakarta project, we had the opportunity to tell the story of its past, present and future through our design and, therefore, naturally had to do our research. We take into account history, heritage and cultural context all while keeping longevity and timelessness in mind. Four Seasons has been a staple on Jakarta’s hospitality scene for over 20 years. With the new building and new location, was there any intent to redefine or update the Four Seasons brand through interior design as well?

We were directed to create a magnificent space that could appeal to the guests and the locals on several levels. The hotel had to be designed to fit into its urban, sophisticated space, while remaining true to the Four Seasons brand, which is known for its absolutely world-class luxury hospitality experience. Your studio is known for unique designs that tell a story and have their own character and personality. What message and personality do you hope the new Four Seasons Hotel Jakarta will convey to visitors?

We wanted to convey the local culture, history and traditions of both Asian and European cultures – Jakarta’s local traditions and its history with Western Europe, and the Dutch who traveled to the city as spice traders and left their mark on the region. The Dutch influences are conveyed, for example, in the design of Nautilus bar, which features a large mural of schooners en route to port with delicately swirling lines in the carpet to evoke the feel of the ocean.

For Four Seasons Jakarta, we wanted guests to be enveloped by the spirit of the space at the first moment of their arrival, which we did by creating an entrance of amazing scale, enormous height and elegance – [and a space that is also] contemporary, fresh and young. Aside from being influenced by Indonesia’s Dutch Colonial period, what other cultural influences did you incorporate into the design?

We [made reference to] Indonesian design such as the gilded, hand-carved tiles affixed to the ceiling of The Library, which is a private space with handsome seating and jewel-toned walls. Meanwhile, Indonesians love their chocolate but adore jewellery even more, so we designed a patisserie to house an array of sweets in the fashion of a jewel box with gilded geometric trim. One of my favourite details are the his and hers custom-designed chairs found in the sitting area of the private suites. The lobby and the main staircase are particularly spectacular. What are some of the design details within these spaces that were designed to create a big impact as visitors entered the hotel?

There are many – the classical, gilded, 8.5-metre-high open space with ornamental metal work entry door and divider screens, the marble staircase with a custom vibrant rug, an almost 5-metre-high water feature carved in stone, the custom relief artwork from Hadiprana, the crystal chandelier from Lasvit… In comparison with the hotel’s public spaces, the rooms appear more understated.

The guest rooms are a play on international culture coming to Jakarta, such as the Dutch in the 17th century, but also a reflection of the time when Jakarta was first founded. The rooms are classical in scale with a hint of modern details – a mix of late 18th, 19th and early 20th century furnishings. We chose a grey-blue colour scheme because it is one of the most sophisticated gentle colours, and is both uplifting and calming. Were there any particular design challenges that you encountered during the design process?

One of the challenges we faced was how to convey this exciting city with its rich history and constant movement, where the women are fabulous and chic, and there is a delightful blend of different cultures. When I first visited Jakarta, I felt an undeniable pull towards the city and its people and when we were, then, approached with this project opportunity, we had the chance to tell the story of the city’s past, present and future through our design. 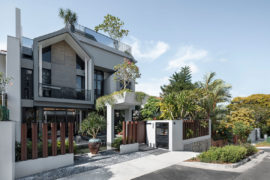