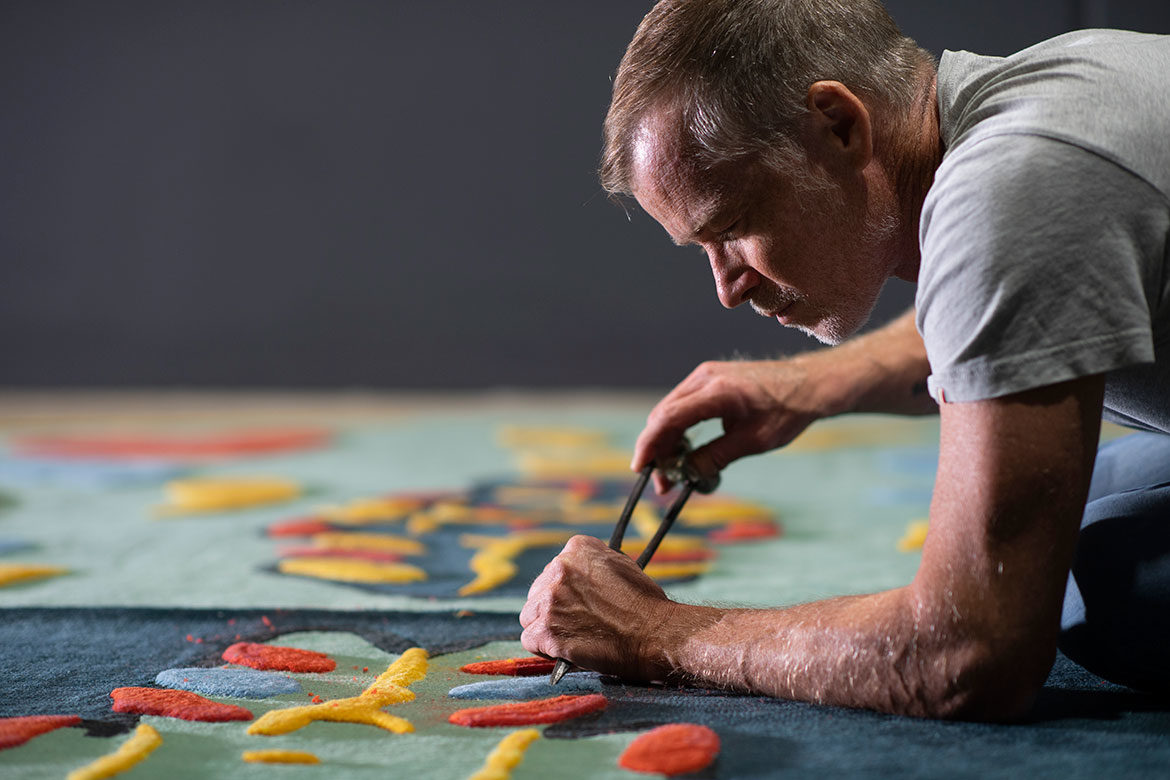 Usually when we think of creating space, what first comes to mind are walls, roof, doorways and windows. The floor is often a blank foundation for the ‘real’ architectural event.

The dramatic and original art piece created by artist Mika Utzon Popov in partnership with Tappeti fine hand-crafted rugs + carpet, challenges this convention. The gorgeous one-of-a-kind rug creates a space that connects ideals and experience boldly and visually. Crafted for Ramsay Health and the Paul Ramsay Foundation, Mika says the concept began with considering the work of the Foundation to bridge gaps that perpetuate disadvantage and poverty.

“The first word that came to mind was ‘connecting’,” he explains. The work of the foundation relies on empathy, on the understanding that “we are all the same”. This further coincides with the need people have for each other, for collaboration and coming together. In the sharing of knowledge, we become a mirror of each other, and this inspired the complementary images and symbols of the rug concept. The lighter figure carries its world in the darker field, the darker figure does the reverse.

Mika also considered how it would function within the long room it was destined for, a space that is both a thoroughfare, and hosts multiple scales of event and gatherings. To move a four-metre diameter rug to one side would not serve as well as a rug that could be divided into two. Each half holding space at the centre, defining the central space, focusing the sense of belonging and gathering.

“It keeps enhancing the idea of connection and bridges.”

He muses that in so many cases, art is separated from people by being located on a white wall with a “do not touch” instruction. This artwork, however, invites touching. It calls to the playful, childlike part of us that wants to stretch out and run a hand over the textural variation. Mika hopes people will do so.

To craft an artwork of this scale, architects SJB suggested he speak with Tappeti. As specialists in hand-made, bespoke rugs crafted by traditional artisans, Tappeti have an innate understanding of creating textile-based art. The Lane Cove West studio also provides substantial space for showcasing the possibilities of colour, weave, form and finish and was able to comfortably host Mika for the final hand-carving of the rug.

During the first visit, colour possibilities, and weaving techniques were discussed, and Mika gave them his initial watercolour, based on the concept, ‘Can a meeting become an expression of love’.

“When you are giving yourself outwardly, and giving the best of yourself, it becomes an expression of love,” he explains.

Discussions were had around using combinations of colour to create nuances and shifts in light that would change the appearance of the work depending on the viewpoint. Because all fibres for Tappeti rugs are traditionally pot-dyed using non-toxic dyes, the choice of colour is virtually unlimited, says Tappeti Founder and CEO Karinna Gobbo.

Having worked closely with many artists to create bespoke rugs, she says they also understand the importance of ensuring the vision is faithfully captured and crafted. Each piece is a genuine partnership between the designer, the Tappeti team and their artisans who weave the rugs using natural, ethically-sourced fibres.

For Mika, the initial sample based on the watercolour led to further conversations about colour and form and symbolism.

The palette of hues was refined to feature the bold reds, deep blues and bright yellow of the Mediterranean region where Mika spent much of his life. He had created a line drawing for the final design, and Tappeti discussed where parts of the design could be enhanced, with half-sheen and sheen incorporated within the weaving process, so the colours shift in the light.

Tappeti carefully documented the design down to exact colour and placement of each individual thread, then worked closely with the Tappeti artisan weavers to bring the vision to vibrant, tactile life. The rug was then carefully shipped from the weaving workshop in India to Tappeti’s studio in Sydney for the final touches.

Mika says he was pleased the process of weaving was one of human making, not automated machine manufacture. “I loved the idea I could work on it here (in Sydney). I also like to try working with local knowledge – otherwise we may lose that knowledge.”

Once the woven rug was complete and had arrived in Australia, he then spent three days at the Tappeti studio hand-carving the final textures into the piece.

“It was literally like sinking my hands into a pile of lollies with the colours,” he says.

“I come from a long journey of hand-making things. I love meeting things with my hands and my fingers – exploring the way things have been made, seeing the fingerprints of the maker, seeing the size of the tools that have been used.

“The eye is an extension of the brain – the hand is connected to the heart. When you hand draw or use a paintbrush there is a dialogue there between the pressure you put on a pencil or brush and the paper. That is when you shift into a space of commonality, sharing and connection.”

He imagines that people in the space with the rug will want to instinctively reach down and touch it – and hopes that they do.

“As children some of the most important experiences we have are the visceral experience of touching.”

There is also a hope the work will uplift those who share space with it.

“We are in a time now where art has the possibility of being uplifting again. We have a generation that is exhausted – from concerns about the planet and climate change, the pandemic, housing affordability, so many things. Art is something that connects us – and lifts us up.”