From a transformable unit designed to grow up with the children to tributes to a retro sci-fi flick and an endangered local architectural icon, here are the 8 designs in P5 Studio and Montana’s Freeplay competition.

“This batch of Singapore designers have truly inspired us with their aesthetically-driven and highly sophisticated designs leading the way for Montana to explore new design possibilities,” said Hans Lindeberg, Director of Sales & Marketing at Montana.

Functionality, practicality and sentimentality were the keywords of the brief given to the designers, who each created a furniture piece from Montana’s 36 modules (available in four depths and 42 colours).

The results are delightfully varied, from a transformable unit designed to grow up with the children to tribute pieces to the gossip bench, a retro sci-fi flick and endangered local architectural icon.

Below are the images of the eight designs photographed at various locations in Singapore that complement the story behind each piece. The locations were curated by Studio Periphery and P5 Studio. Photography and Art Direction by Studio Periphery  Checkout the studio’s Instagram @studioperiphery for more images.

The Commune by Archetype Studio 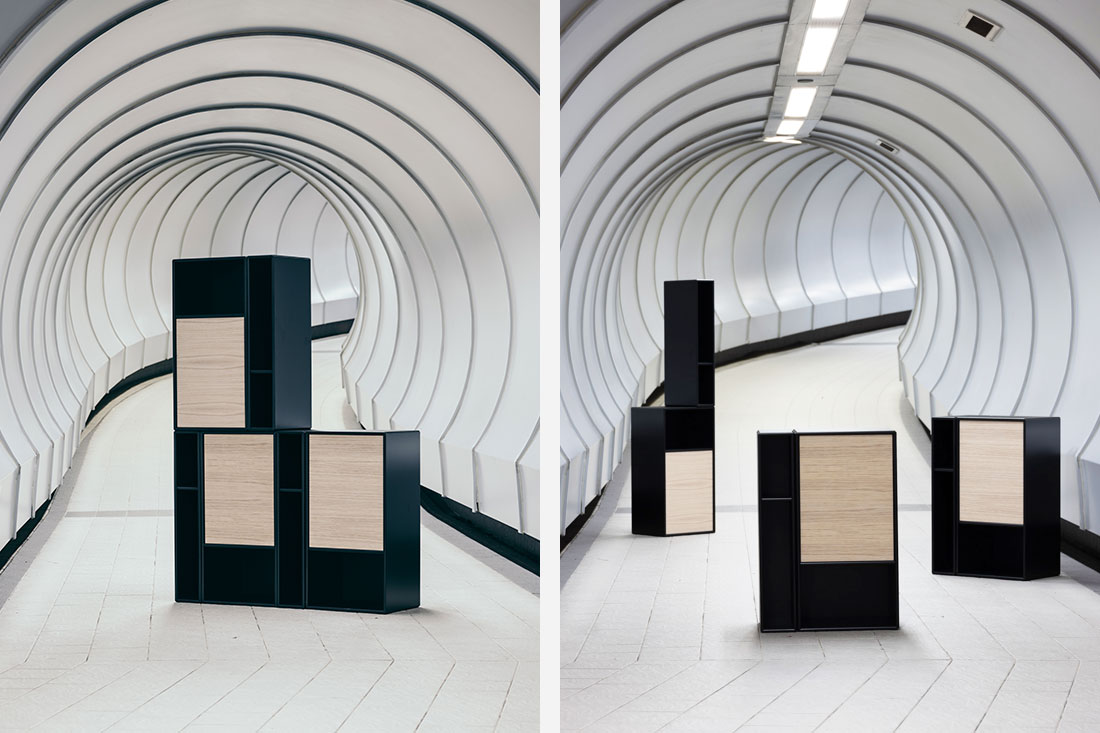 The Commune is a three-module storage unit that can be assembled in nine different configurations to suits users’ needs. The design was inspired by the meeting of commuters at a shared facility. The commune is envisioned as a meeting place that encourages dialogue in the setting in which it is placed. 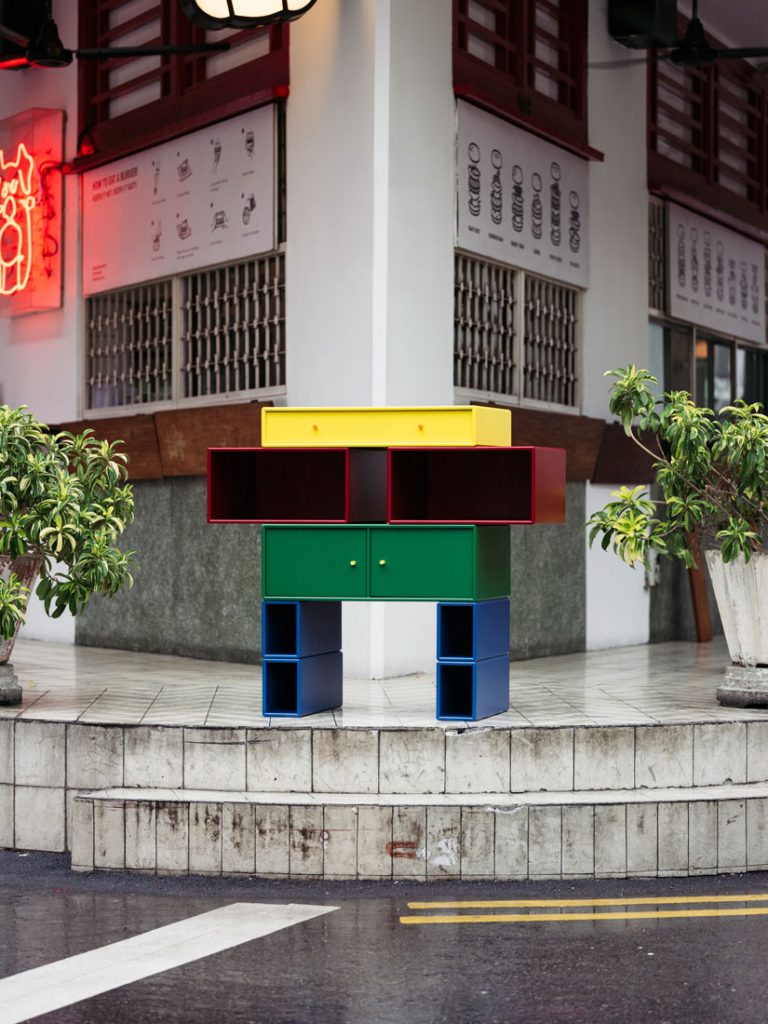 Transformer by Asolidplan photographed at the Keong Saik Road

Designed to last a lifetime, Asolidplan’s Transformer was inspired by the notion of growing up. Transformer‘s modules can be reconfigured transformed to suit different needs as its users grow up, from a diaper changing station to a child’s desk, a full height desk and a standing dresser or a mini bar.

Imaginarium by The Carpenter’s Workshop 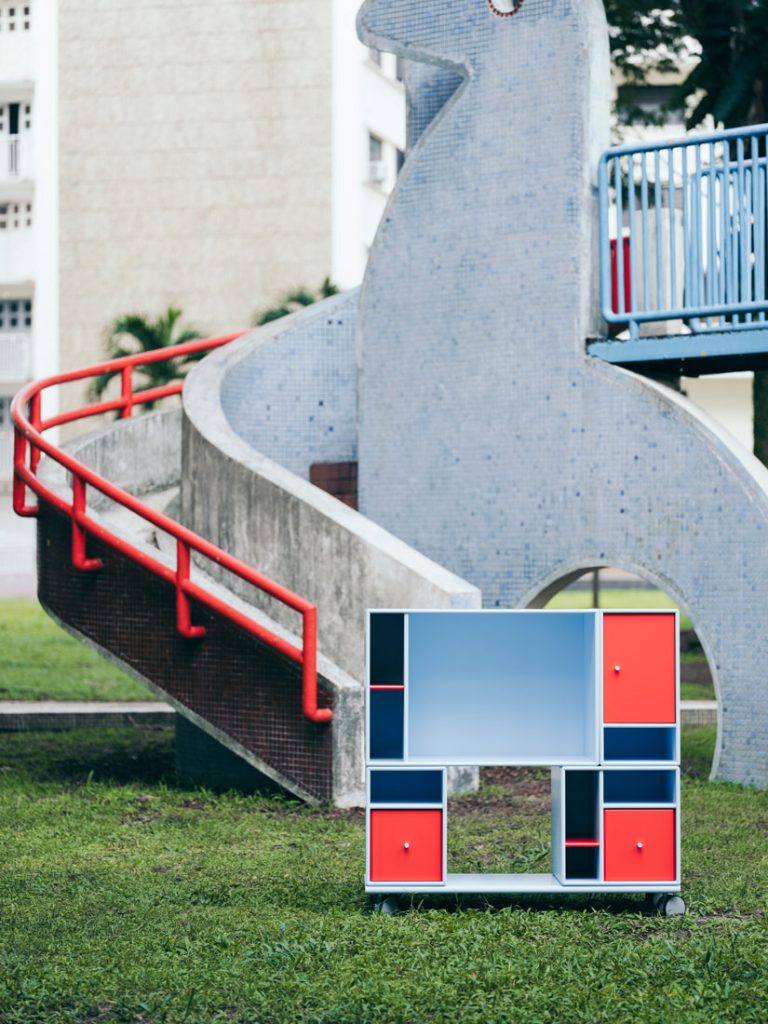 Designed for children age two to six, Imaginarium by The Carpenter’s Workshop is a portable play station and display case that provides the little users with storage a stage for their stories and precious items. The base is equipped with four wheels for easy portability. 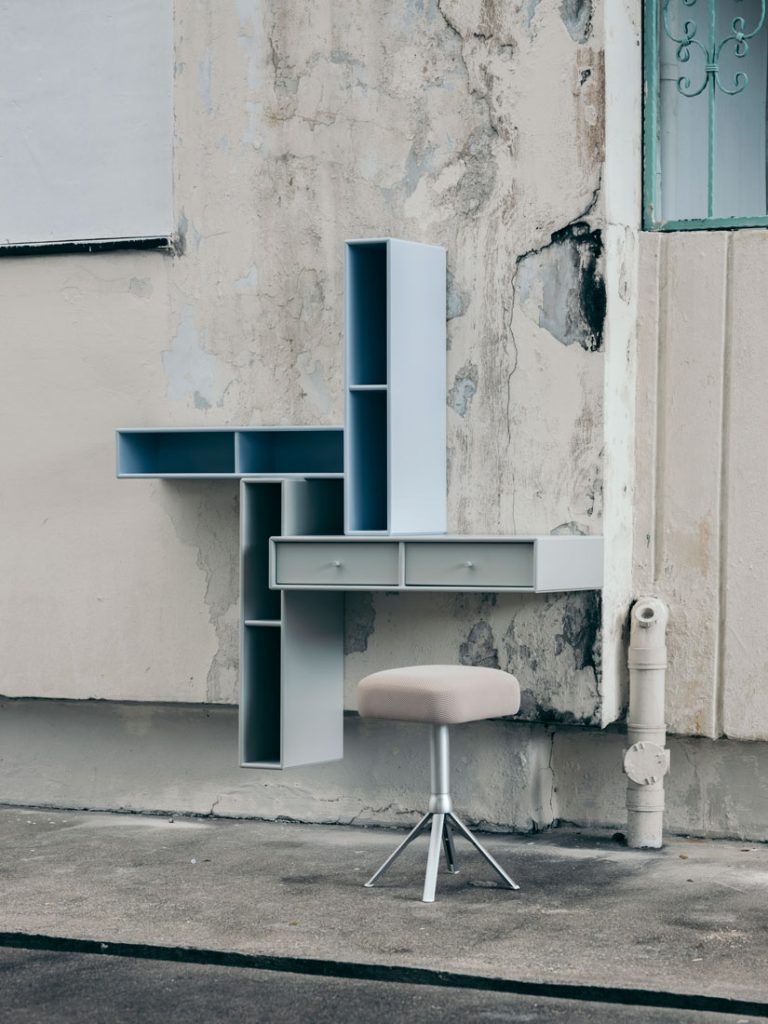 Inspired by Mondrian’s artwork and Magritte’s colour palette, Dicot by the Monocot Studio is a functional art mountable on the wall that can serve as a vanity, display case and shelving system. 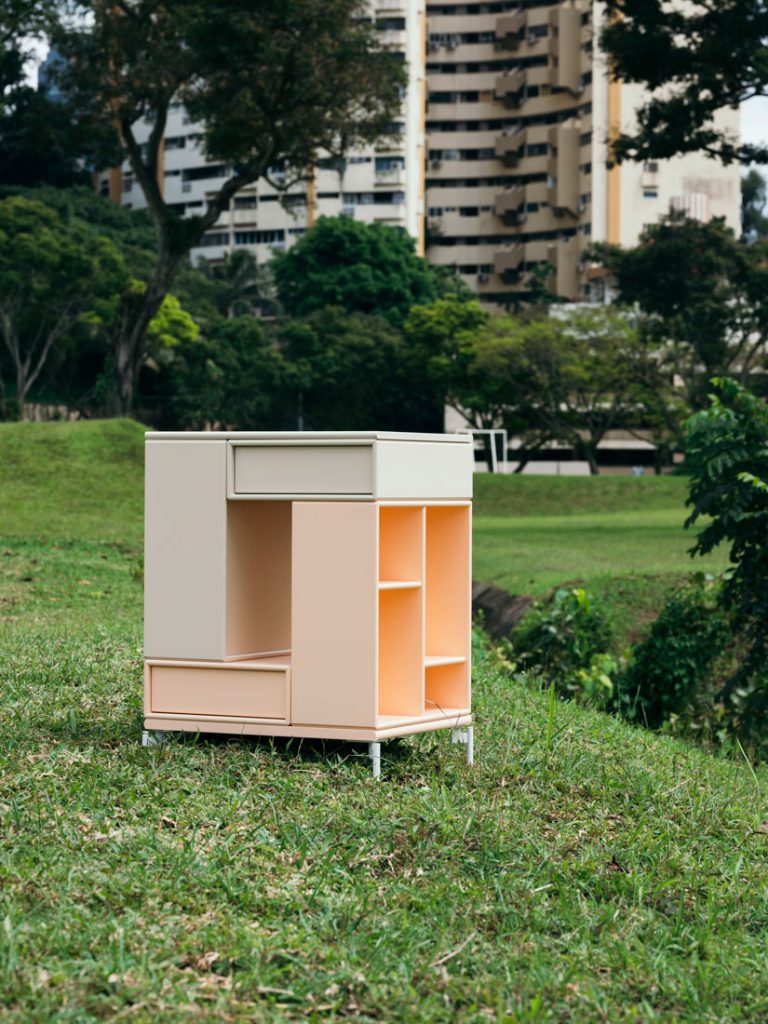 Interlock by Provolk is a tribute to local architecture icon Pearl Bank Apartments. Founder of Provolk conceived the idea for the unit while lobbying for Pearl Bank’s conservation. Interlock features two interlocking L-shaped modules that create a multi-directional unit that can serve as a side table and drawer module. Its colours are carefully selected from Montana’s range to match that of the Pearl Bank. 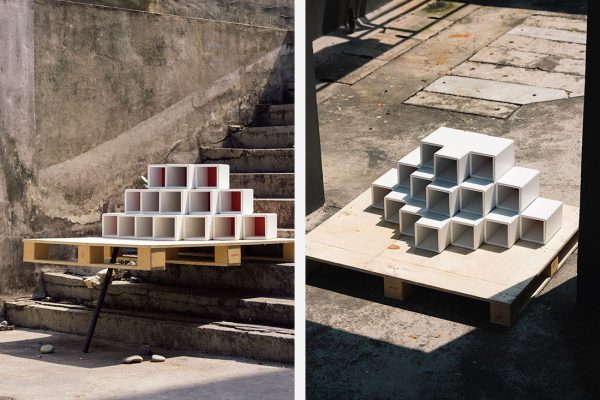 SM(ALL) is an architectural collective made up of small individual practices focusing on projects by research. Their creation Flow:Flyde 126 sees a number of Montana’s 126 x 126mm units arranged to create a topographical composition, breaking its modular rigidity. Flow:Flyde 126 is envisioned as a versatile unit that can serve as wine holder, magazine rack or a wall art. 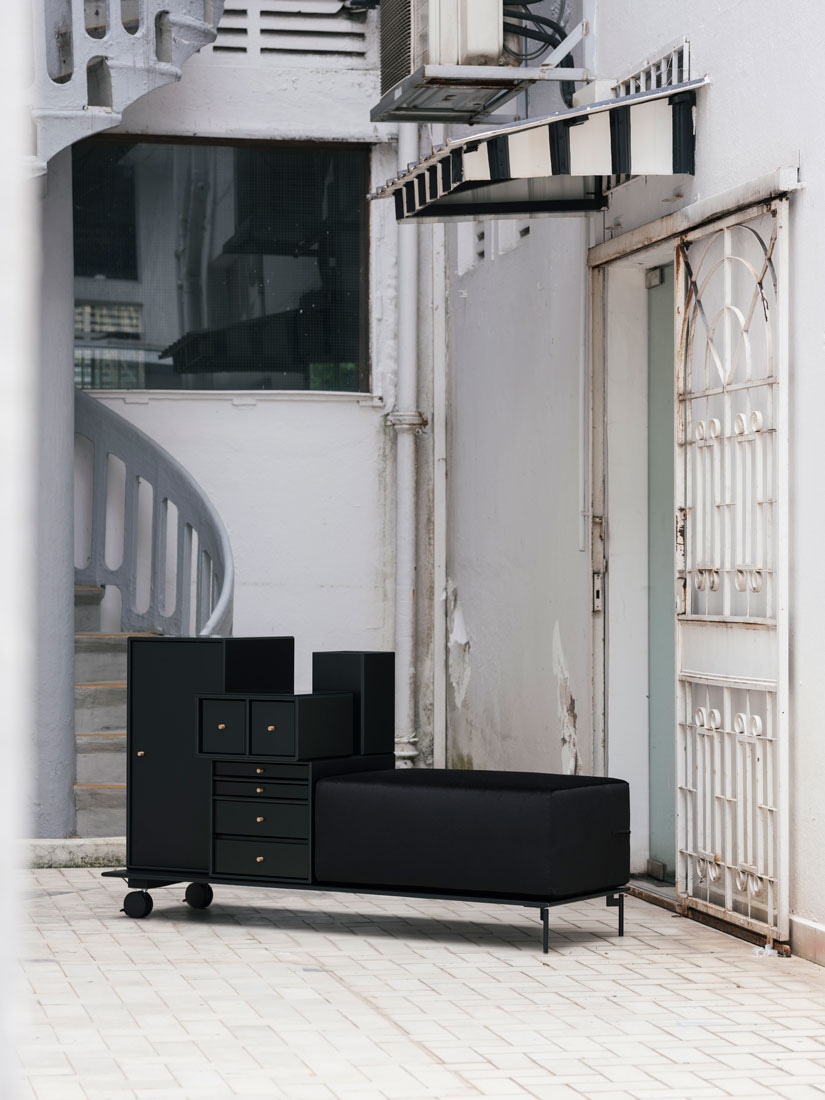 A modern re-interpretation of the Gossip Bench, Vice by UPSTAIRS_ is a series of drawers, trays and compartments arranged to form a mobile bar. The unit was inspired by the studio founder’s memories of his mother’s long-forgotten favourite furniture. 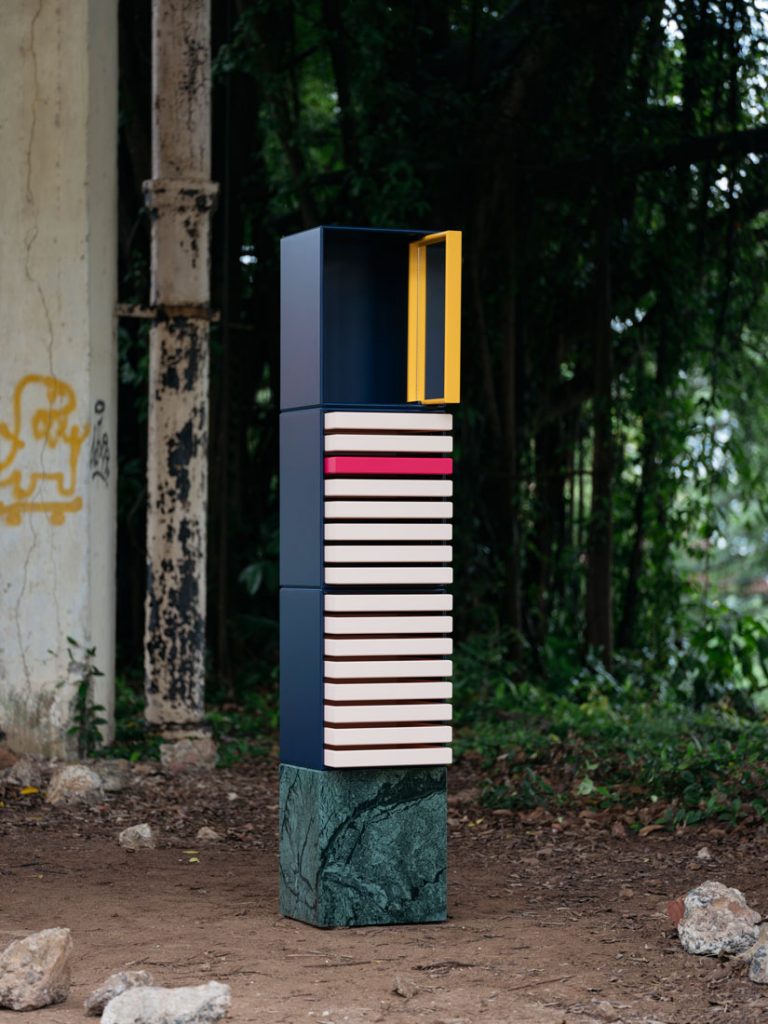 Totem by Wynk Collaborative photographed among the pillars of the Portsdown Water Tank, a nod its sci-fi inspiration

A nod to HAL 9000’s mainframe in cult-classic retro sci-fi flick 2001 A Space Odyssey, Totem by Wynk Collaborative is a quirky monolith designed as an occasional cabinet for daily rituals. Totem can be used as an organiser, a stand-up vanity cabinet, a reading shelf – the possibilities are endless. Users are encouraged to explore the ways Totem can assist them in their daily lives.

“Besides offering an avenue for designers and architects to create and personalise a design or an art piece as they wish, Freeplay is a noble yearly initiative to advocate and promote local design, talent, and heritage on an international stage,” said Calvin Ngo, Vice President of P5 Studio.

The eight designs will be revealed on 24 January at P5 Studio at 213 Henderson Road, where a jury, consisting of Montana’s CEO Joakim Larsen, Director of Sales & Marketing Hans Lindeberg, and Architect and Head of Spatial Design Helena Lauren, will crown one design as the Singapore winner of Freeplay – Vol 1.

All eight designs will be available as Montana Singapore Collection, retailed exclusively by P5 Studio.

After the reveal party, Indesign Media Asia will hold a viewers’ choice contest.

A specially created unit of the most-voted design will be given to one lucky voter – stay tuned!