Thomas Bentzen shares his designs and visions at Orgatec

Thomas Bentzen presents a friendly and warm character, thoughtful in his responses, intuitive and just a little nostalgic in his approach to furniture solutions for modern working modes. Alice Blackwood meets Thomas at the Muuto stand, at Orgatec. 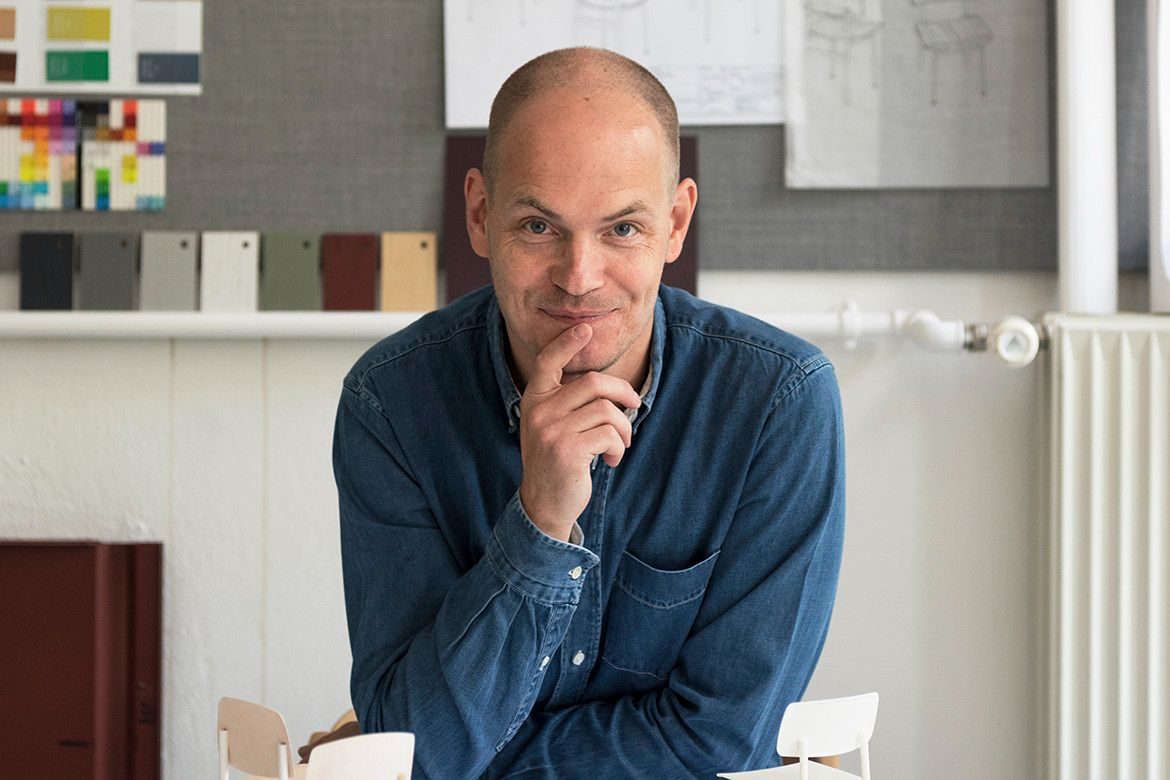 The Muuto stand, with its careful curation of furniture and edgy colour palettes was undoubtedly a highlight for anyone attending the Orgatec workplace fair in Cologne, Germany, this year.

Everything on stand – from the notepads and pencils sitting on desktops, to the enticing hardcover design reads filling bookshelves – was carefully thought-out. It presented Muuto as a brand that knows how to keep it fresh, effortlessly achieving that tough balance of being at the forefront of things, while also being timeless.

It was within this setting that we met up with the Danish designer Thomas Bentzen (pictured). Bentzen introduced us to his Linear system for Muuto, which finds itself at home equally in spaces of work, education and even airports.

Whether using it as a quick touch-down point or pulling up a chair for a lengthier period of work, the system speaks to Bentzen’s nostalgia for his childhood workspaces. Here Alice Blackwood chats with Bentzen about his designs.

Alice: Tell me about the Linear system you’ve designed for Muuto, which we’re currently sitting at?

Thomas: This is something we’ve created over the past three or four years. It’s called a system, but it’s actually not about being a system, it’s the opposite. It’s bringing the home to the office, so it’s about giving you a feeling of privacy and a closer workspace, where you can do your best while you are at work.

It’s created for touchdown workspaces and new spaces – for educational use, library [spaces], airport lounges, and the office of course. And people are not just buying the desk and putting it up, people are buying the whole package because they want the environment that it creates.

It’s all about creating a space within the space where you can focus and work.

It’s really flexible, and [easy to construct] yourself … you can also reconfigure it super easily. You can [configure] it so one end is a work area, and the other end is a meeting area.

We have also created all these accessories so you can adjust it to whatever needs you have. And all the accessories are mounted with a simple nub. You just screw it in from underneath. Super easy to configure!

Alice: You’ve described it as being like a ‘home’ from which you can work…

Thomas: [In designing Linear] I tried to copy the feeling I had when I was a kid and coming to a classic library where they had these small desks with a small roof and a glass frame. It was always a quiet, nice space. So that’s what I’m trying to recreate today, but in a different way. So when you see Linear, [you feel] ‘I want to go here, I want to work, I want to enjoy. This is my home for the next two hours while I work.’

Alice: How did you arrive at the accessories you designed for the system?

Thomas: The way I work is like we are creating mock ups. We are sitting at a desk and figuring out … what kind of accessories will create this atmosphere? What are your needs when you are working together, but also want privacy? So, the screens [for example respond to that question of] much do you need to have the feeling of privacy?

Alice: What do you think the future of work holds for us, and what is the role of design in that?

Thomas: ‘The future: if you want to know about it, you have to create it.’ I remember once a person said this. I’m trying to loop into what I feel is right in what I see. And I see that people want to work [in a mixed way] now.

I also think that people want to shift space [as they work] with different people. And so, [there is] this more free environment. I think it helps people feel better at work, but also [feel] more free at work.

Muuto is available through Grafunkt and XTRA in Singapore.