Bento Boxes and A La Carte: A Chat With OMA’s Shohei Shigematsu

Japanese architect Shohei Shigematsu opened his session at Fortune’s Brainstorm Design Conference during the Singapore Design Week 2019 with a hypothesis: “Mixed-use will be the new generic.”

The New York-based Partner at OMA likened the prescribed, samey-samey program in today’s mixed-use buildings to a bento box. “No matter how much an architect is trying to make something exciting and well-designed, if the ingredients are the same, the experience will inherently the same,” he said.

The image below was created to illustrate the point. 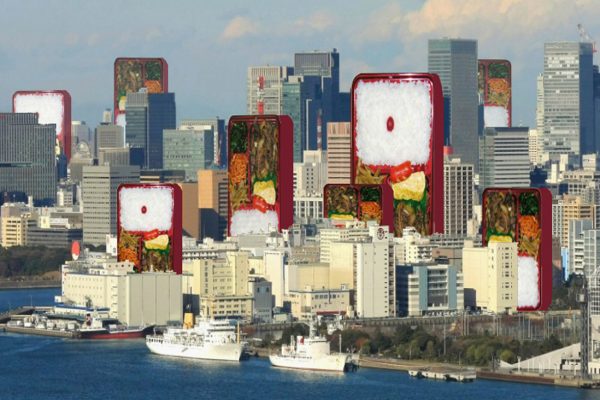 He shared the image with Mori Building, one of Japan’s leading property developer, the name behind Tokyo’s hippest developments Roppongi Hills and Omotesando Hills and cultural hotspots Mori Museum and teamLab Museum. Shigematsu shared that it was a risky move that could be taken as criticism, But Mori appreciated this observation. 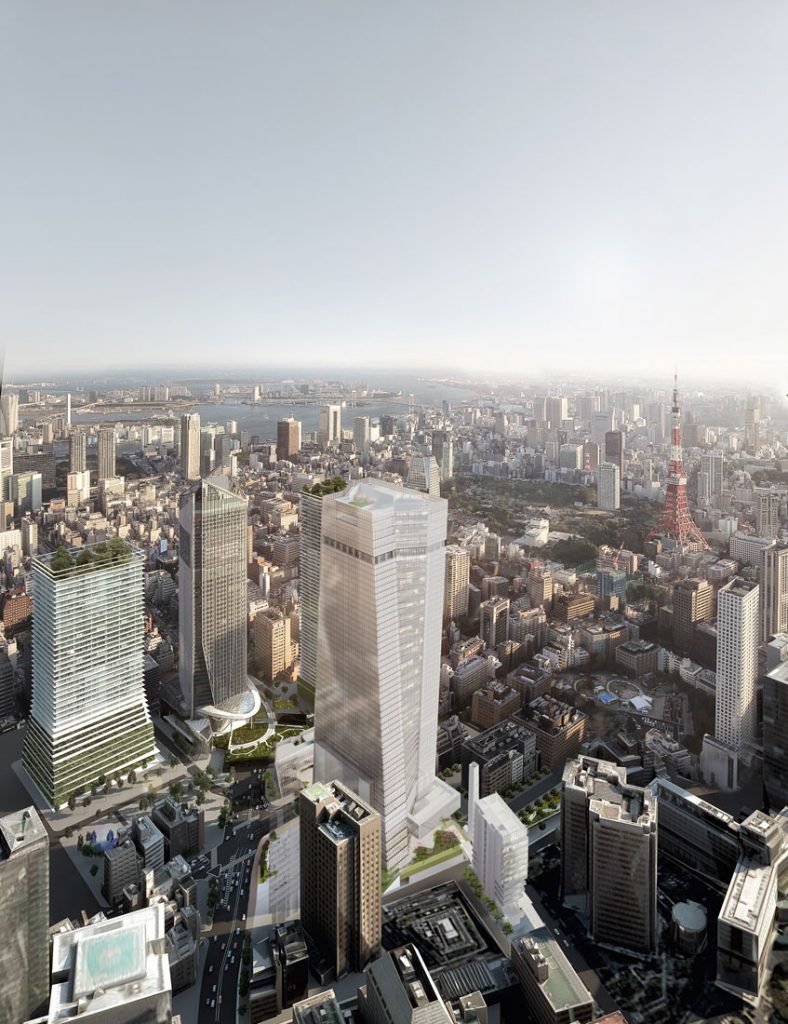 OMA later joined the competition to design the Toranomon Hills development and was awarded the project in 2016. Construction will begin at the end of this year. Situated between Tokyo’s heritage district and the Olympic complex, the Toranomon Hills Station Tower will be one of the busiest urban spaces in the world when it’s completed in 2023. 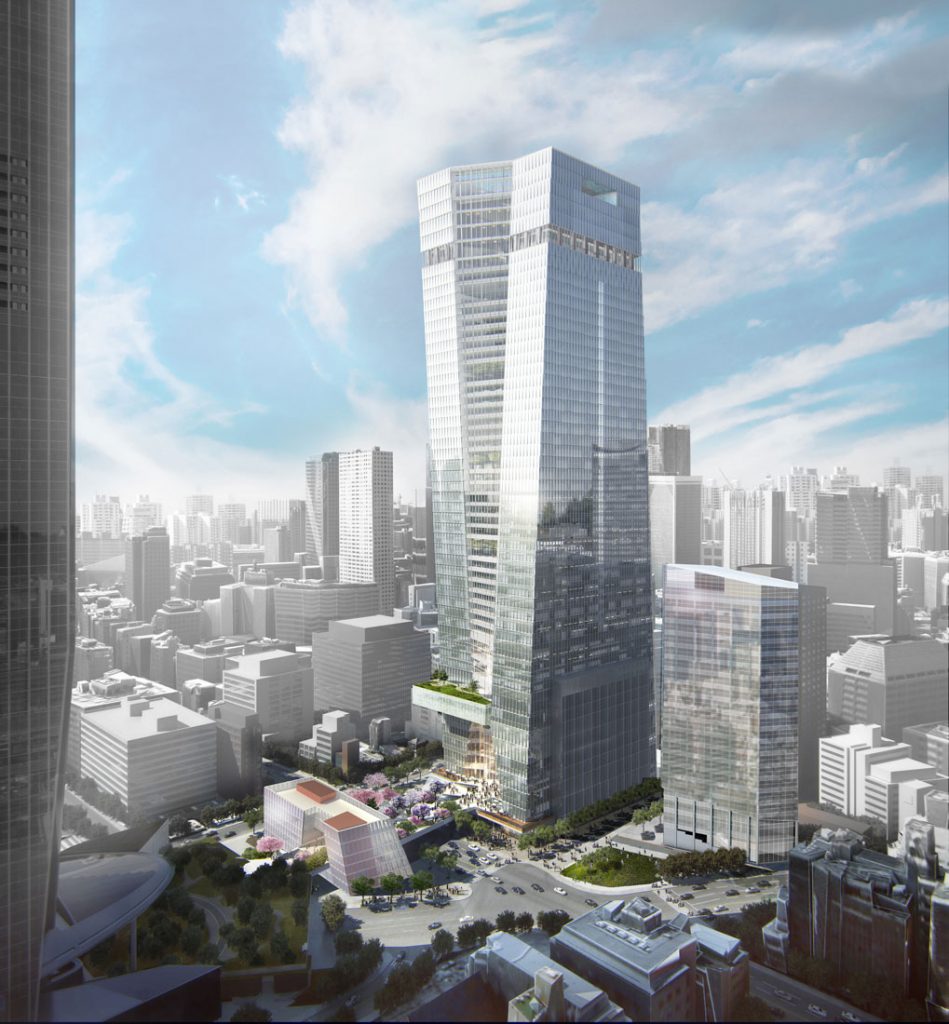 The tower will be located between bubbles of mixed-used developments, and instead of creating another siloed urban ecosystem, it aims to create a public loop with its neighbouring skyscrapers. The tower’s cores are placed on the sides, leaving its centre free. A massive is inserted into the tower’s volume, which is sliced open and shifted to articulate the axis pointing to the Olympic complex. 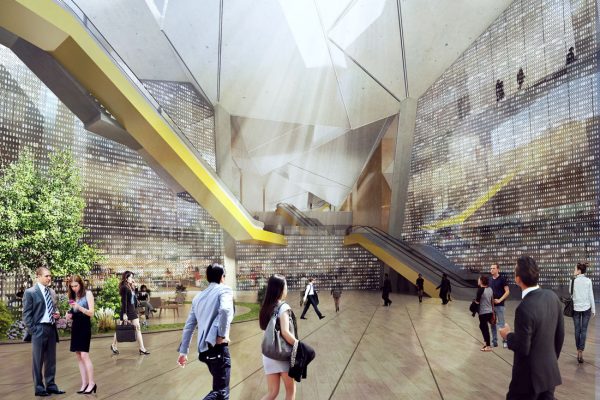 The new metro station will be directly connected to the tower’s plaza, and commuters will be received into a grand concourse – a first in Tokyo. A media centre with green public space will cap the tower. 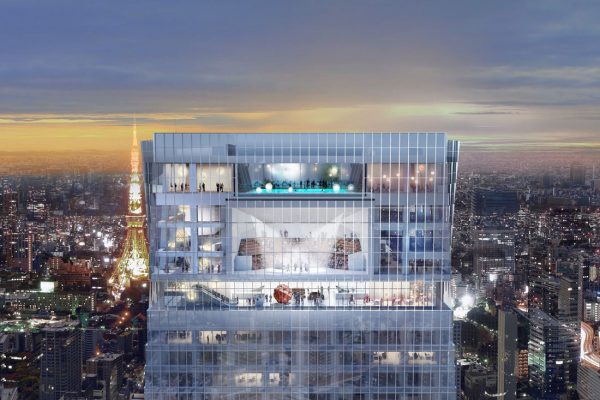 This spatial programming was the result of a three-year-long conversation between OMA and Mori. Shigematsu called it an ‘a la carte’ approach to architecture, as opposed to the aforementioned prescribed ‘bento box’. Rather than just creating a form, OMA had added content to the project brief.

“Architects should be able to at least propose something to the client and discuss its potential. This will expand the expertise of architects while developers can look at the profession in a new way,” shared Shigematsu.

We asked him to share more about collaboration, the ‘a la carte’ approach and its potential. 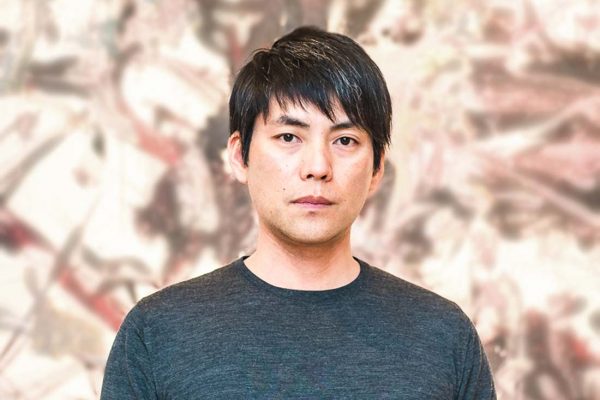 Can you share more of your observation on how the collaboration between architect and client has changed or evolved?

From personal experience working in this project, I think more people have become aware of the changes in different fields and have started to think of the future critically. We live in the age of innovation but we still have war and poverty and many other profound issues.

So, in the end, it’s not about client versus architects but it’s about working as collaborators to resolve issues in the city. And also about trying to project our own vision of the cities because the current cities are the result of the vision set by the previous generations.

“I think there are other values that we should pay more attention to, other than the economic values.”

It’s about time for the new generations to think of our own version of a city because I don’t think New York or Tokyo or Singapore should be the end of the urban evolution. I feel strongly that we should create our own agenda and to realise that, collaborations are crucial. We have to work with not only developers but also sociologists, researchers, developers, and expert from other fields.

The current cities are not functioning perfectly. I’m not looking for perfection, but I think there are other values that we should pay more attention to, other than the economic values. The collaboration talked about in this kind of conference are, in reality, trying to tackle the same goal, figuring out the future.

Tell me more about the ‘bento box’ presentation. How do you suggest we diversify the content?

It’s a good question. I don’t know the perfect answer to that. But at least I am aware of the problem and that’s the first step because not so many architects or developer is actually admitting that it is a problem.

We need something new in trying to recreate a new experience within the city. In order to do that, architects should be able to propose programs to the developers during the design process. Right now I think this is missing from the architecture profession. And if you continue this model, you are relying on the developers to come up with a programme.

“It’s about time … to think of our own version of a city because I don’t think New York or Tokyo or Singapore should be the end of the urban evolution.”

Luckily our office has the credibility to do that, but it’s not something we [architects] were taught to do. Also, developers often have a preconceived notion about architects as creators of forms, not content. I think we should believe in each other and have more discussions in order to have different ingredients in the ‘bento box’, or create a ‘bento box’ with room for ‘a la carte’ addition.

Diversity is the key, the problem is that once a development becomes successful, it will be replicated. And this formula – let’s make an office, a hotel, a mall together – it has become such that it ignores the unique local context and most of the time there isn’t a strong reaction to counter that.

I’m not anti-globalisation, but I always try to emphasise the need for diversity. Yes, there could be a Starbucks there, but there should also be a local coffee shop. I think this kind of local and global balance should be maintained.

Where did the ‘bento box’ analogy come from?

I thought of the ‘bento box’ observation way before I started doing that mixed-use projects. I studied alimentary design, which investigates the culture of food, for three years. There are three fundamentals things a human needs: shelter, clothes and food.  All three have become pretty much globalised, but food also remains quite local. Like champagne, for instance, it’s called that because it is produced in Champagne, but it is also consumed globally. I thought it was quite interesting.

Can you share some of the findings from the study that influence your architectural practice?

I found out that food production tends to be pushed outside as the city became bigger and denser. But now there’s a tendency to bring agriculture and food production back to the city. Food literacy and production could start to merge with city living. This could be a new vision that this generation can think of because there is a huge interest in local produce and eating healthy.

“I think food could become like oil and start influencing politics.”

Another finding is that food could become something that will be dictating how you draw the country borders. There was a study that projected two regions on earth that would survive global warming thanks to food production: one is located in Central Asia, on the northern border of Kazakhstan and China, and the other is on the US-Canadian border, a bioregion called Cascadia, which is now starting its independence movement.

I think food could become like oil and start influencing politics. Bringing back food program into the city will also be interesting typology-wise. I think it’s important to see things through something else. We were commissioned by the Seed Capital Kentucky to do a study on food hub in 2015 [West Louisville Food Port].

Food taught me so many things that you can’t actually discover if you’re just looking through architectural lenses. This also helps in collaborating. At Harvard, when you said [your project] was all about cities, no one from business school and law school would interested to collaborate.

But when I said food, everyone was interested because they’re also dealing with the issue. Architects need to develop this kind of language and a point of view that also creates more interests. Don’t isolate yourself as a just a designer of built form. 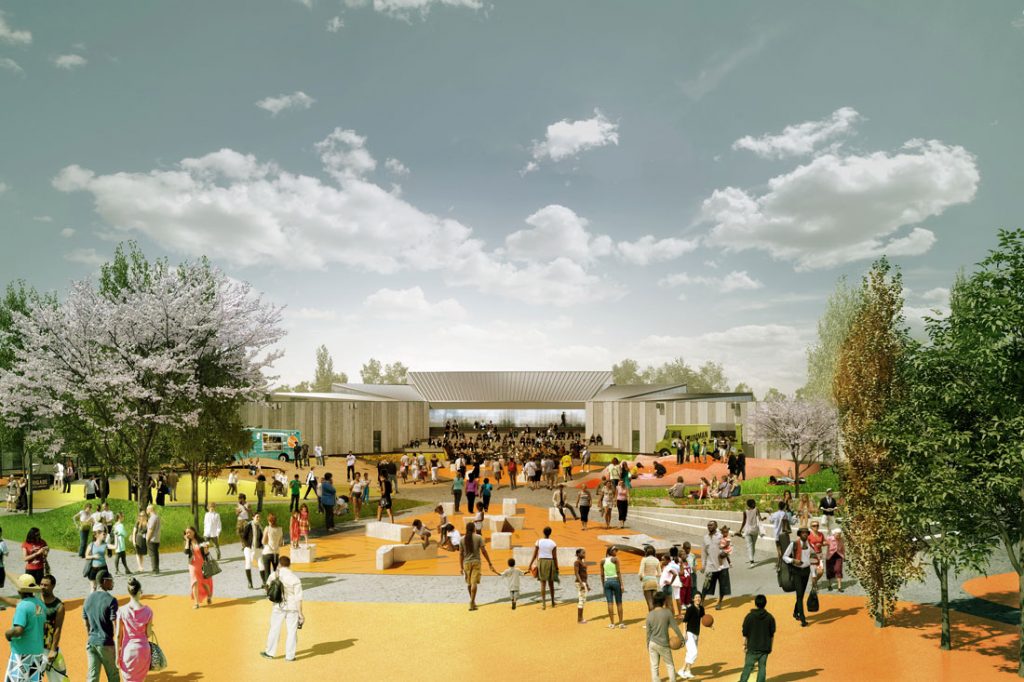 Rather than projecting an ideology, I think it’s very important for architects to communicate the changes that are happening so that people start to be aware of those changes. Then we can orchestrate creative ways to tackle the issues that emerge from those changes, together. The world is far too complex and the modernism ideology has failed in many places.

At the presentation, Mori Building would like to develop Tokyo into the number one city in the world. What dare the parameters?

That’s difficult, because who can say what’s number one? You have to be unique, and for me, it’s about providing enough flexibility and public space where people can invent and experiment. If the city becomes very uptight and controlled, I think that will be the end of the city. And I think with Toranomon Hills Station Tower, we’re trying to produce a highly public zone but also can merge with commercial ambitions. 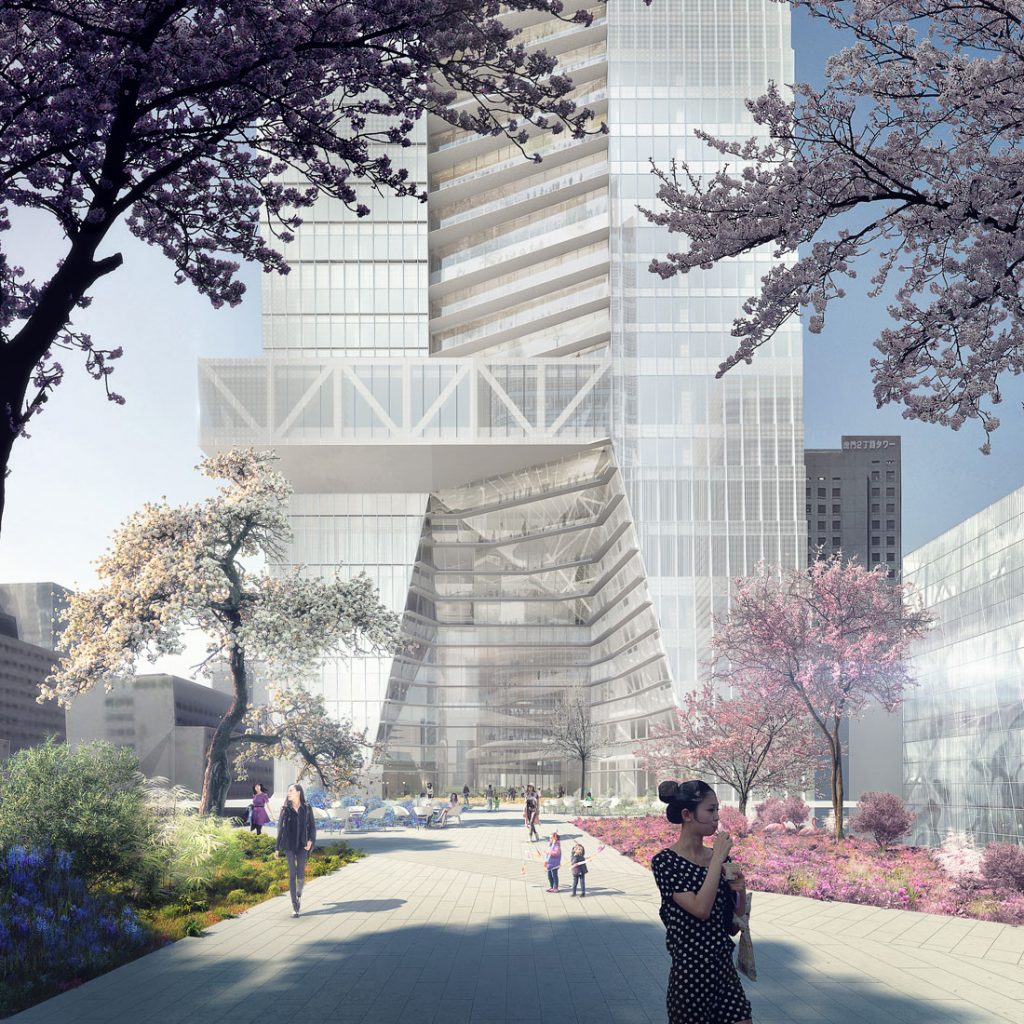 View from the bridge looking up to sky box and upper atrium. Rendering copyright OMA.

All images courtesy of OMA