Daliana Suryawinata and Florian Heinzelmann of SHAU are dogged idealists when it comes to the transformative power of architecture and urban design. Projects like their series of microlibraries show how social improvements can come one architectural experiment at a time. 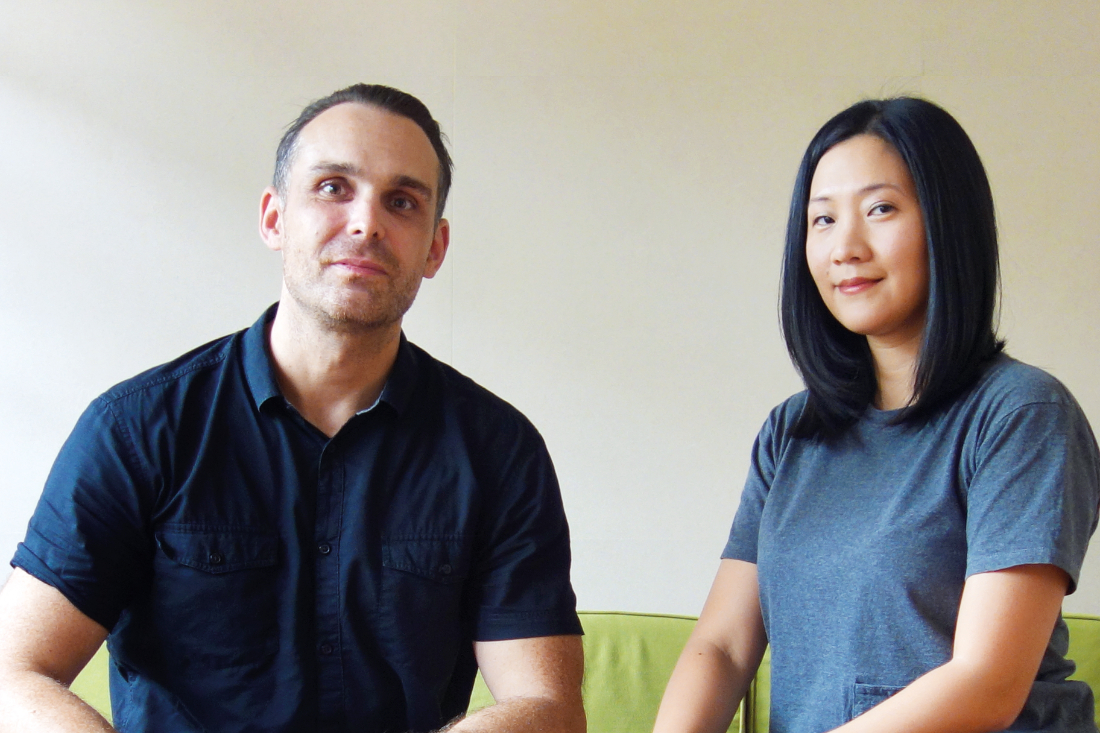 Florian Heinzelmann (left) and Daliana Suryawinata (right) founded SHAU in 2009 with a strong interest in exploring issues of social responsibility and sustainability. Photo courtesy of SHAU.

“Political commitment is very important,” Daliana Suryawinata says. The co-founder of architecture practice SHAU is referring to the fact that their self-initiated microlibraries in Indonesia would not be possible if city officials did not provide prime plots of land to begin with.

In the larger scheme of things, she could very well also be referring to the importance of getting the buy-in of the government when it comes to the firm’s greater agenda of addressing social matters through architecture and urban design.

SHAU is spearheaded by Suryawinata, Florian Heinzelmann, and Tobias Hofmann, with Hofmann helming the practice’s office in Passau, Germany. Suryawinata and Heinzelmann, both alumni of progressive practices like OMA, MVRDV and UNStudio, are partners in both work and life, and head up the offices in Rotterdam, the Netherlands and Bandung, Indonesia where they spend most of their time.

“Our idea was to hand out candy, not with sugar, but in the form of swings, slides, or a net to lie in. We try to do architecture that lures kids in, activates them, and then we sort of go ‘Oh, by the way, here are books.'” 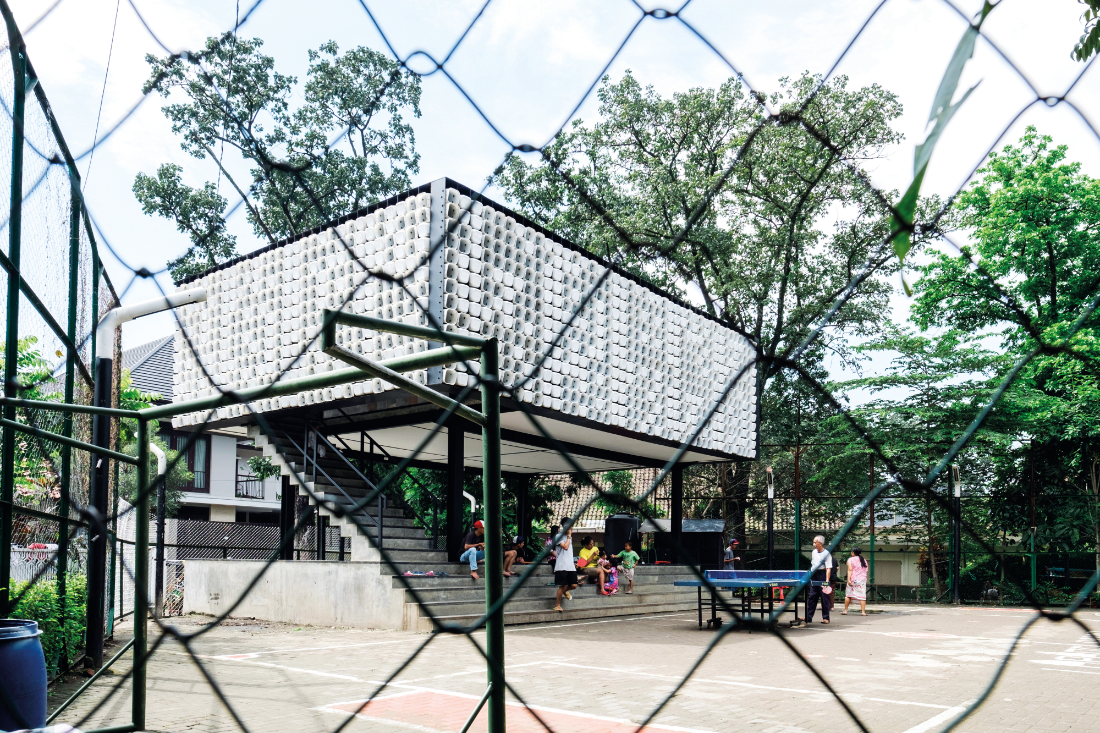 SHAU’s first microlibrary at Taman Bima features a unique façade of ice-cream buckets and has become a point of pride for the neighbourhood. Photo by Sanrok Studio.

“The public space and social responsibility question have always been very strong for us. And coming into Indonesia, we could explore it more,” Heinzelmann shares. He attributes it to more relaxed regulations in comparison to Europe, and a clientele that is more comfortable with unknowns.

Its series of microlibraries for children, of which five have been realised, is one of its most significant projects in the area of social intervention. It tackles the issue of education and literacy with a generous dose of experimentation – ice-cream bucket façades atop an existing community stage, a climbable structure of terraced gardens, and a meticulously constructed timber lattice structure playfully accessorised with nets as in the case of its latest Warak Kayu library in Semarang.

“Reading is considered a punishment here; if you’re late or didn’t do your homework, teachers would ask you to read a chapter of a book,” Suryawinata shares, also highlighting that Indonesia ranks 60 out of 61 in a survey by Central Connecticut State University on the World’s Most Literate Nation.

“Our idea was to hand out candy, not with sugar, but in the form of swings, slides, or a net to lie in. We try to do architecture that lures kids in, activates them, and then we sort of go ‘Oh, by the way, here are books,'” Heinzelmann says. 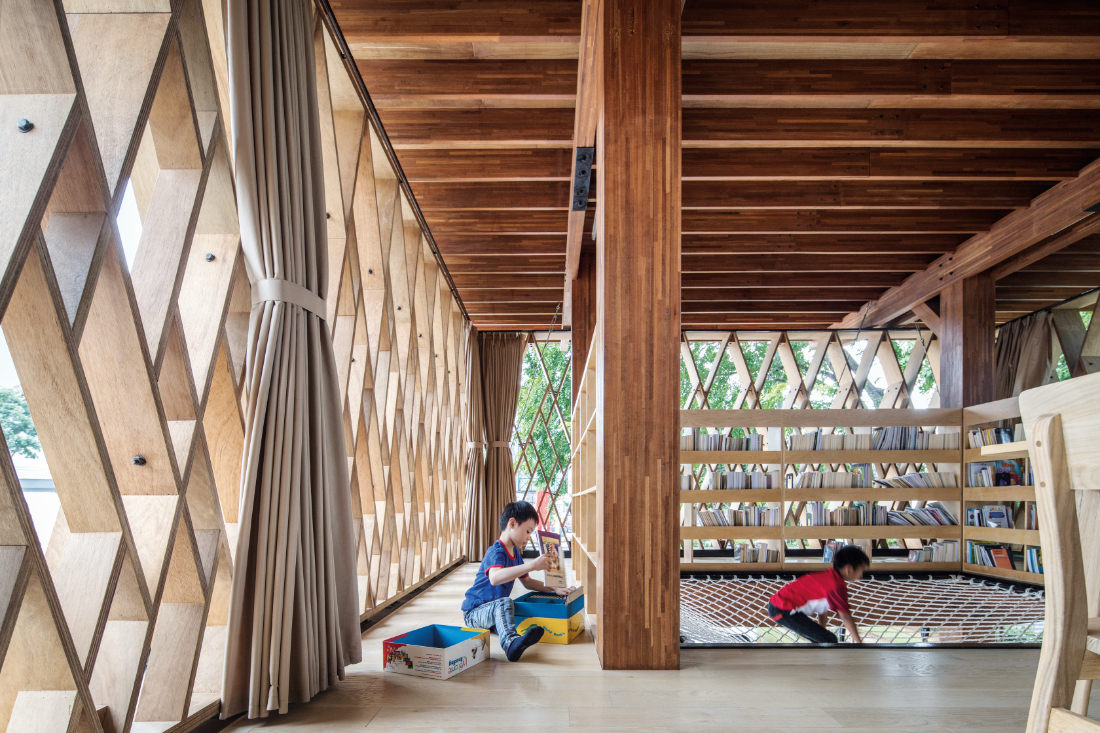 The Warak Kayu microlibrary is the latest in the series and incorporates multiple elements of play to positively influence perceptions around reading. Photo by Kie.

The microlibraries are centrally located within neighbourhood centres to make books more accessible to the poor who are generally less-mobile – making the trek across Indonesia’s sprawling cities just to get to the central library is not an easy reality for many of them.

Designed as multi-programmatic ludic spaces, the more successful of the microlibraries are also mobile clinics, arts and craft workshop spaces and storytelling corners by turn, all in service of the greater community.

The idea for the microlibraries was first pitched in 2012 to charity organisation Dompet Dhuafa who was also the sponsor for the first one in Taman Bima. It wasn’t until a meeting in 2015 with then-mayor of Bandung, Ridwan Kamil, that they were given an ideal plot of land for their first microlibrary.

.
“Even though we can get experimental when working with the government, it’s not the case for social housing where we get straightjacketed into deliverables. But we would really like to push forward an architectural utopian solution.”

“In order to get this kind of land, it has to be from officials. It’s never private land,” Suryawinata says. “But a microlibrary is also good for the portfolio of the mayor or governor who’s agreeing to it.”

That first partnership with Kamil, who is now governor of West Java and a trained architect himself, opened up opportunities for public interventions on a larger scale. When he initiated a linear sequence of parks under the Pasupati flyover in Bandung, SHAU was engaged to create a film park, which has become an urban living room of sorts for the community – people take off their shoes and have stopped littering. 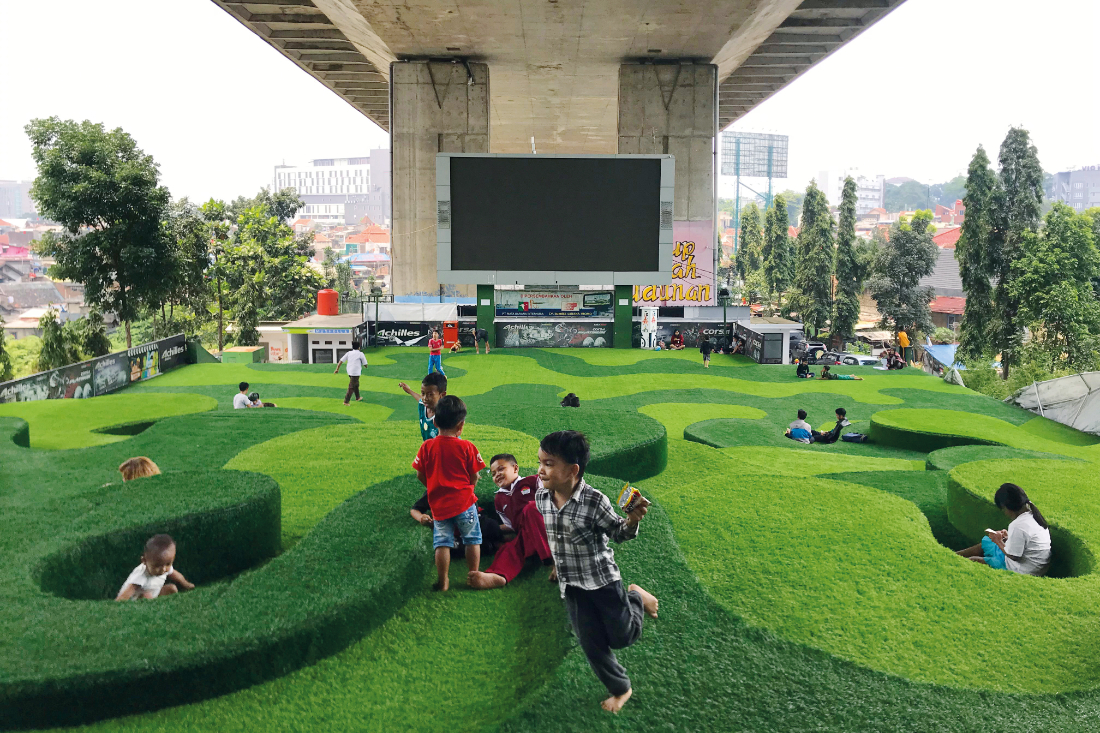 The Film Park by SHAU was commissioned by Ridwan Kamil (the city’s then-mayor, now governor of West Java) and was a catalyst for a series of other government-commissioned public interventions. Photo courtesy of SHAU.

Later, they were also commissioned to design the 5,400sqm Cicendo Park, a richly layered multi-programmatic space that encourages exploration and interaction. Also approaching completion is another public square in Cirebon. Such projects are validation of how architecture and urban design can be an effective tool for the Indonesian government in bettering its cities.

It seems that the initial collaboration with the governor kickstarted a slew of public space projects in West Java, now involving over 20 architecture firms across Indonesia. “Many of these projects will soon be realised, so we’re very curious to see how they turn out,” Heinzelmann says.

Beyond designing urban spaces that activate and energise the city, SHAU is keen to push boundaries in other areas. “We have this research on the vertical kampung over the past few years – how social housing could give more to the people who live there and resemble a sort of vertical community,” Suryawinata shares.

“Even though we can get experimental when working with the government, it’s not the case for social housing where we get straightjacketed into deliverables. But we would really like to push forward an architectural utopian solution,” says Heinzelmann. As with the microlibraries, perhaps a chance encounter with the right collaborator could change things in their favour once more. 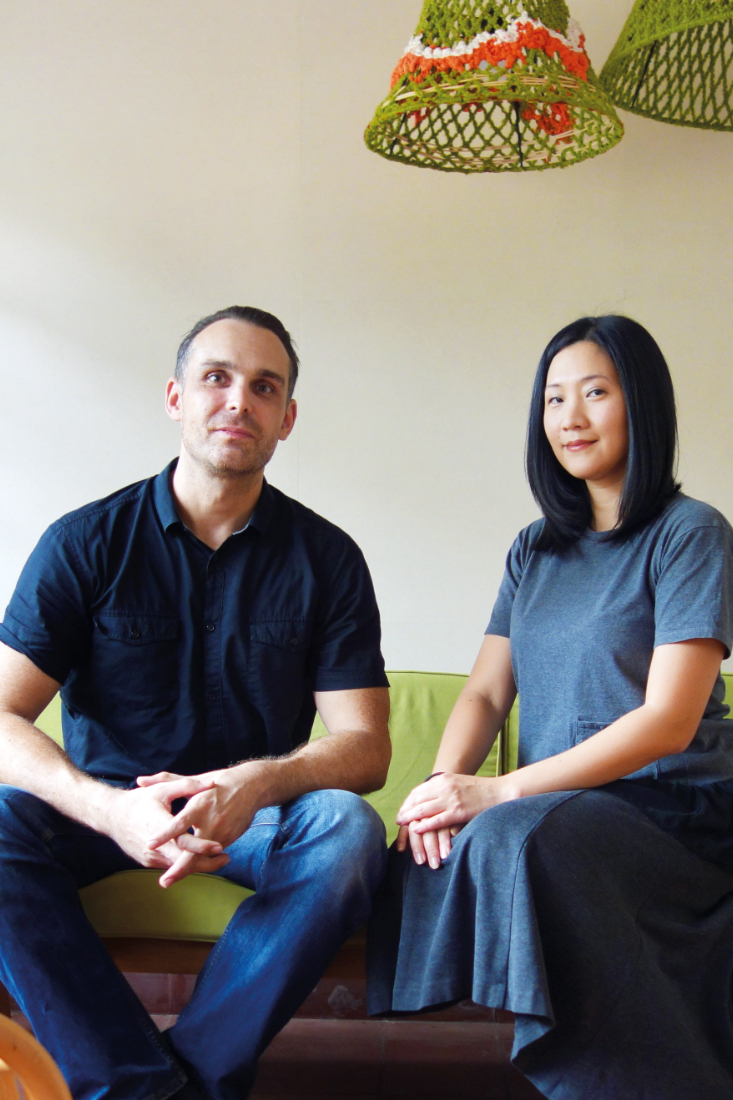 Florian Heinzelmann (left) and Daliana Suryawinata (right) founded SHAU in 2009 with a strong interest in exploring issues of social responsibility and sustainability. Photo courtesy of SHAU.

Related: 8 Architecture Projects In Asia Nominated For Beazley Designs Of The Year 2018