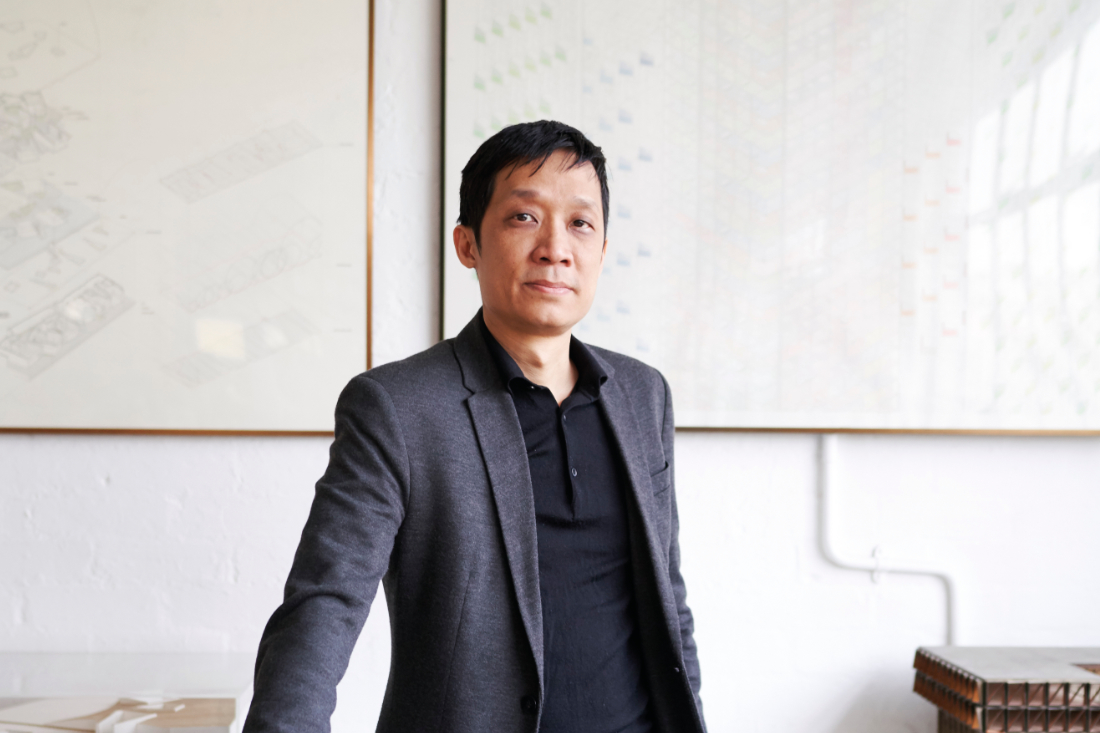 In his seminal writing The Architecture of the City, Aldo Rossi introduces the idea of the urban artefact – architecture or a fragment of a city that presents not just a common form, but also embodies a city’s history, culture, social structure and more. Arising from this was a call for architects to be sensitive to urban and cultural context, and to leverage enduring architectural precedents to inform their work.

To understand Rossi’s theory and proposition is to understand the work of Serie Architects. Its founding principal Christopher Lee not only teaches this at the Harvard Graduate School of Design as part of an in-depth 12-seminar series, but has applied it with equal rigour to the firm’s works. 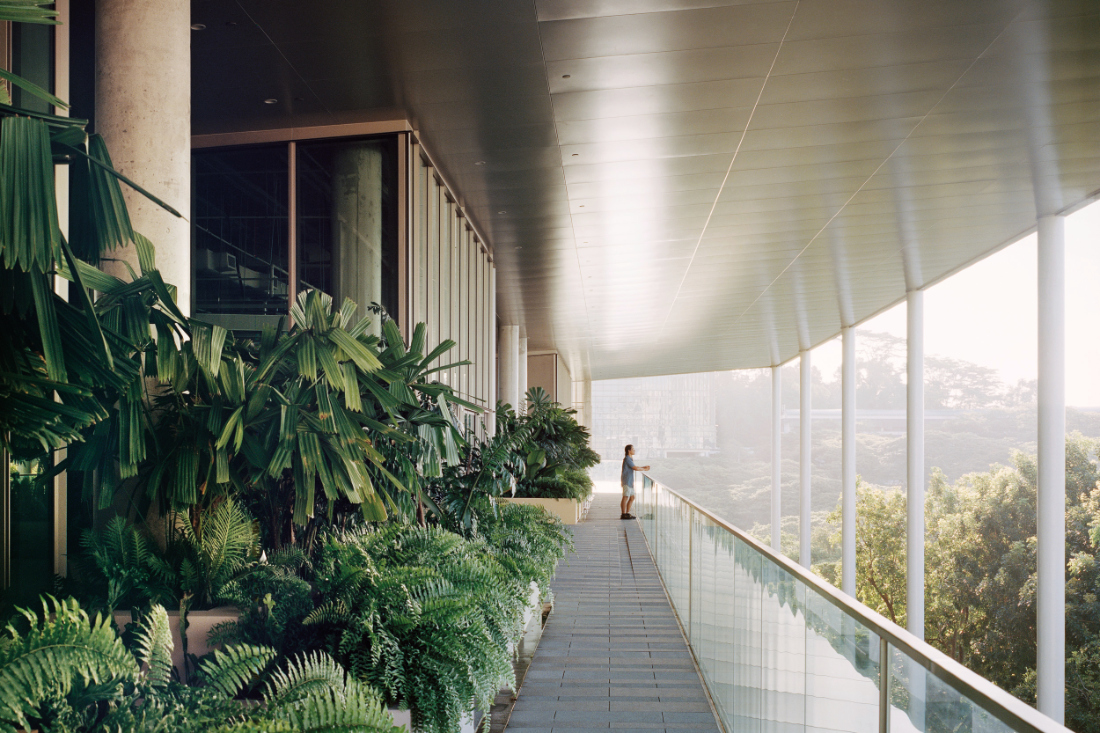 Unlike many of Serie Architects’ other projects which are informed by prior research, the net-zero energy NUS SDE4 building was “informed in the making”, according to Lee. Photo by Rory Gardiner.

The goal is to design buildings that, while new, would feel familiar to the people who use it. Lee continues, “In this way, the architecture doesn’t solely belong to us as designers, but also to the people.”

“We view our work as unfinished, in that different generations could take over and change the way they occupy the space but the architecture would still be coherent and robust.”

The research-driven practice was founded in London and Mumbai, by Lee and Kapil Gupta. It was primed as a global practice from the very start and the lucid intellectual framework that Lee established has helped the growing firm work in different parts of the world with equal ease and clarity.

“We felt that once this intellectual framework is in place, it will then take on a life of its own and we would not need to dictate each and every line and gesture,” Lee explains, contrasting this with the alternative of having a house style that the practice adheres to. 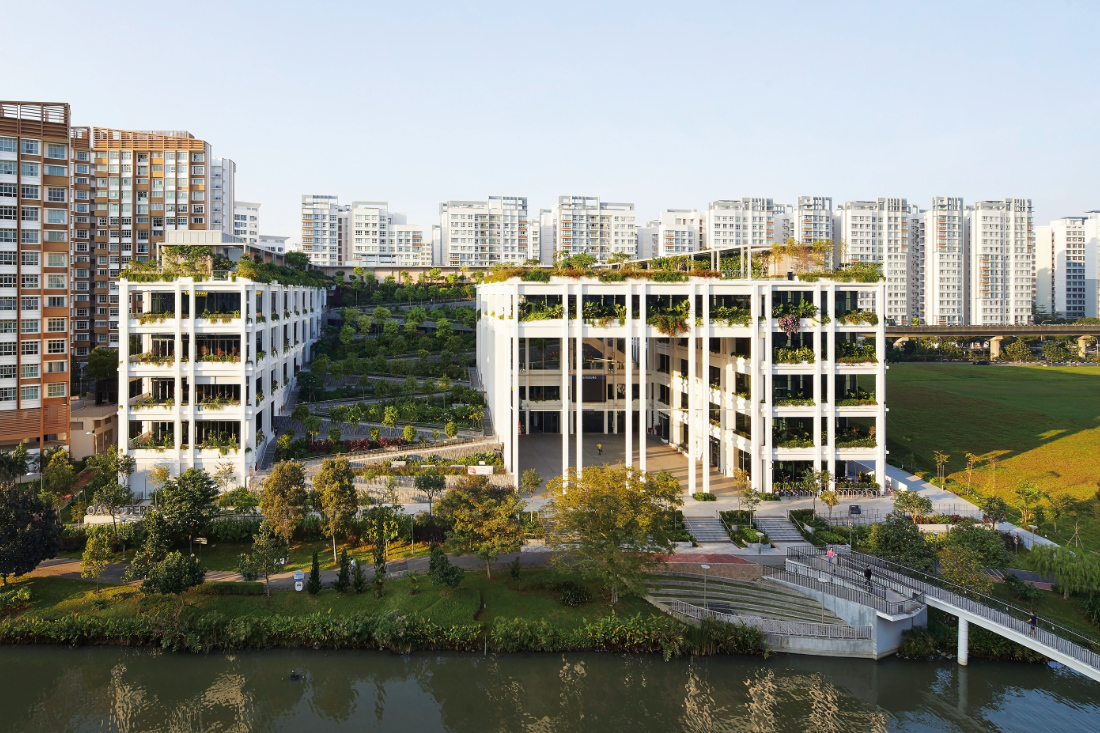 Without a typological precedent for a neighbourhood centre that brings together a polyclinic, shopping and other communal facilities, Oasis Terrace references the “common architecture” of HDB blocks. Photo by Hufton + Crow.

In partnership with Multiply Architects, the Serie Architects now also has an office in Singapore – understandably so given the projects it’s been working on here after winning a slew of major competitions.

The National University of Singapore School of Design and Environment’s net-zero energy building SDE4 (read about the project in Cubes issue 95), the new-generation neighbourhood centre Oasis Terrace and most recently, the State Courts extension stand testament to the rigour and clarity of thought with which the practice operates.

“Architecture doesn’t solely belong to us as designers, but also to the people.”

A multi-programmatic space that consists of a polyclinic, a shopping mall, and communal facilities, Oasis Terrace takes its cue from the ubiquitous void decks of Singapore’s public housing and the repetitive grid and open corridors seen in HDB flats of the 60s and 70s. These are transposed into a main void-deck-like plaza, and a façade that’s reminiscent of an open verandah. Cradled in the centre of it all is a sloping green amphitheatre – the practice’s contribution to further what Lee calls the common architecture that is the HDB housing type. 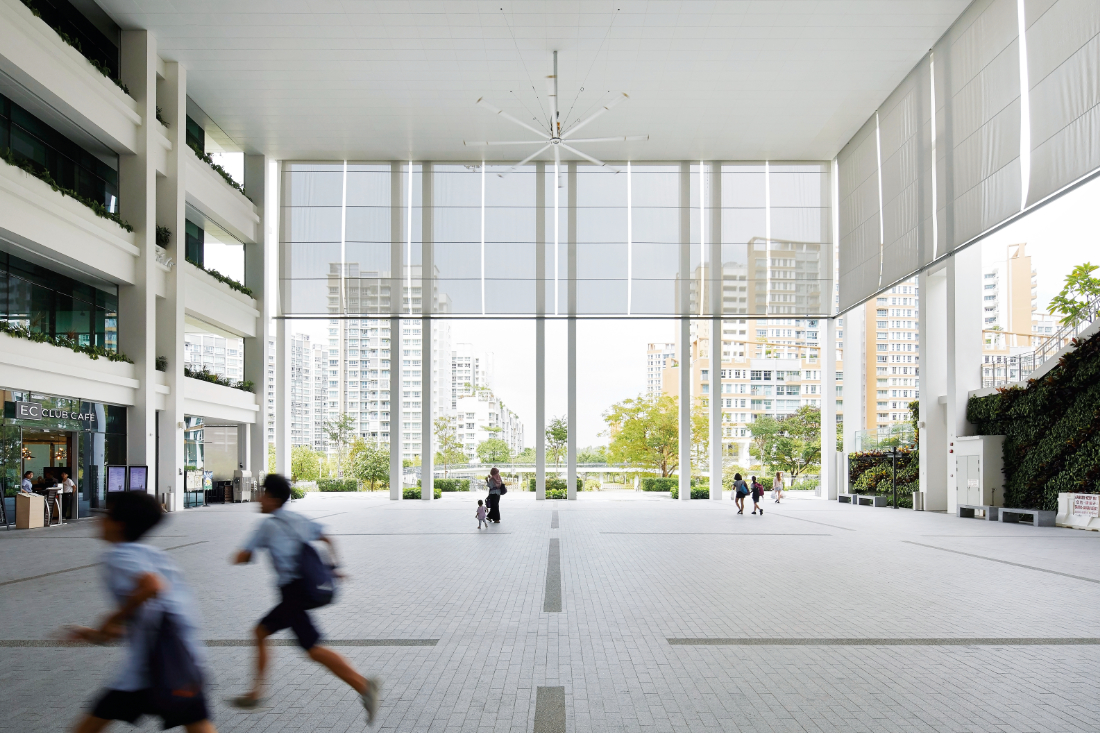 The main plaza at Oasis Terrace is likened to an elongated void deck that can be adapted to suit a diverse range of programmes. Photo by Huston + Crow.

The newly completed State Courts extension also eloquently demonstrates the framework that the practice abides by. “We wanted to draw upon two persistent types of architecture that co-exist in Chinatown. One is the granularity of the shophouse, and just next to it, very tall high-rises. We wanted to bring these two moments together in a single gesture,” Lee explains.

The anchoring court tower can be read as a light and porous stack of ground planes, each one consisting of court boxes designed to the scale and height of a shophouse. The cladding of the court boxes echos the terracotta colour and texture of shophouse roofs that come into view when seen from a high-rise building.

“The least we could do is create architecture that is not alien to its surroundings.”

A portico of sorts sits behind a façade of columns and orders on each plane, the composition a deliberate reference to the classical architecture of courthouses such as the former Supreme Court. The overall result is a familiar yet refreshing and wholly riveting interpretation of the high-rise tower. 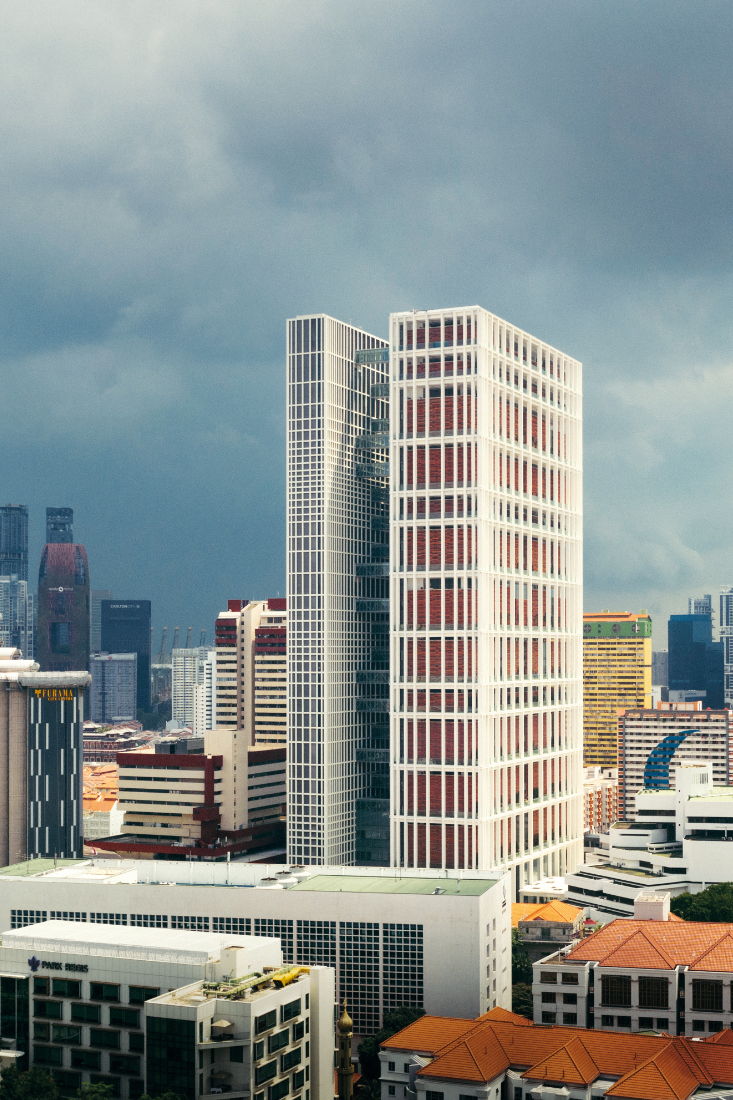 The Singapore State Courts is a light and porous alternative to its usually heavy and solid counterparts without compromising on the complex and highly specific circulation requirements of court buildings. Photo by Finbarr Fallon.

Also central to the practice’s intellectual framework is the idea that buildings can and should be designed independent of programme. “We always try to make our architecture as an open framework,” Lee says. “We view our work as unfinished, in that different generations could take over and change the way they occupy the space but the architecture would still be coherent and robust.”

For example, Lee imagines that the State Courts extension could easily be converted into a vertical museum with little change required of the structure. Oasis Terrace could take in a variety of programmes without having its architecture affected at all. “[The buildings] have that organisational specificity and precision, but its programme could change completely.” 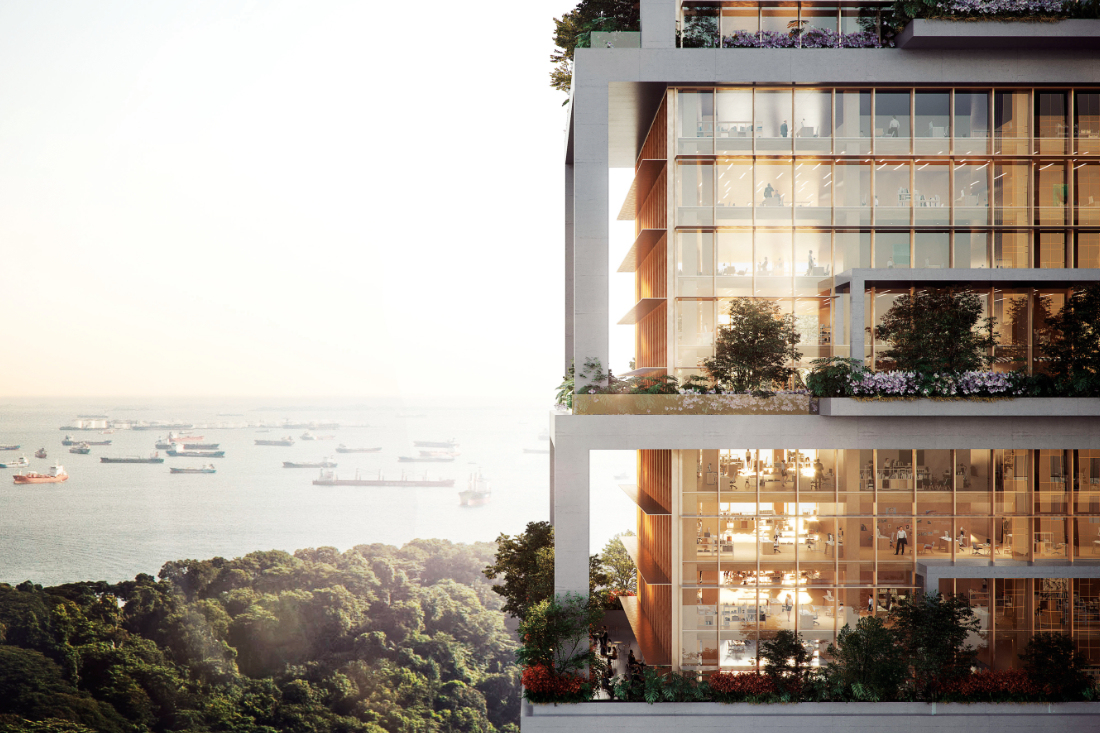 Serie Architects proposed a carbon-neutral tower in Singapore for a major energy company. The core and structural frame of each stacked pavilion is made from steel while intermediate floors are constructed from a hybrid of steel and timber. Image by Serie Architects.

The work of Serie Architects is not only accommodating, but generous in its consideration of who the architecture serves and the evolution of a city. For Lee, the practice’s approach is the only responsible way to design in an age of rapid urbanisation. “The rate of urbanisation, especially in Asia, has been unrelenting. There’s a certain developmental fatigue that has set in where people feel that things are changing too fast,” he says. 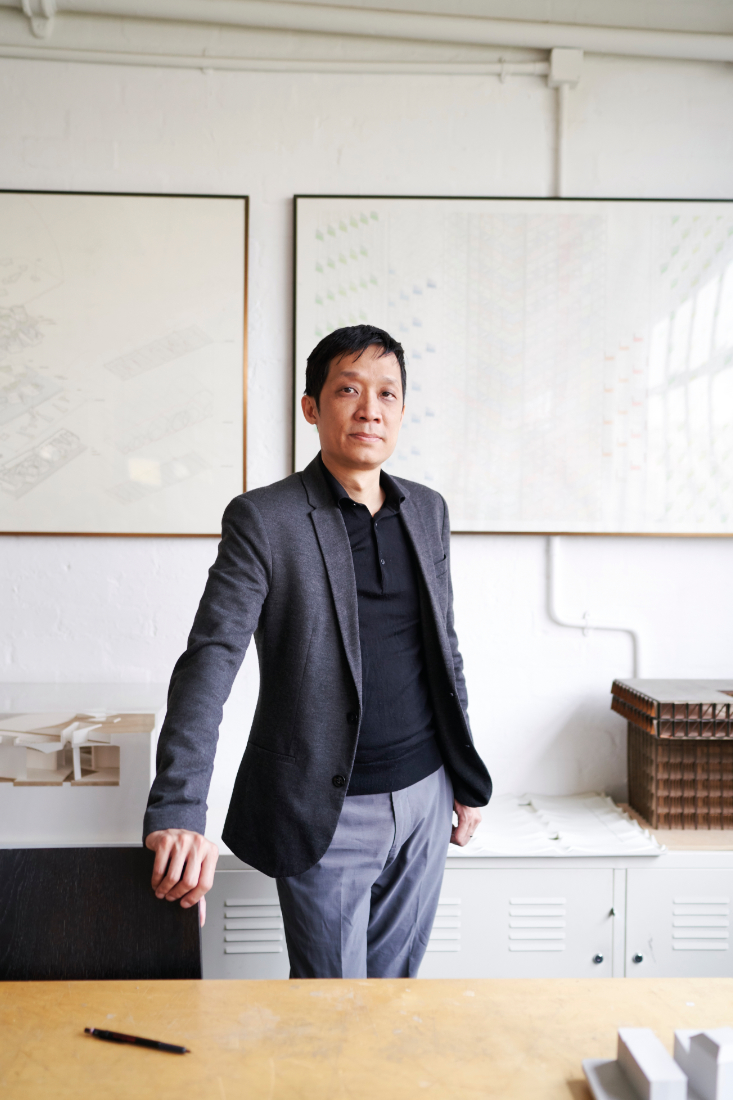 Christopher Lee was part of the academic faculty at the Architecture Association (AA) before he founded Serie Architects with Kapil Gupta. He is currently Associate Professor in Practice at the Harvard Graduate School of Design. Photo by Jordi Huisman.