Ron Arad on the Secret to Curing Boredom

In this Cubes Indesign interview, Ron Arad discusses the trajectory of his multidisciplinary practice.

“Boredom,” answers Ron Arad when asked about what drives him to create. He elaborates, “To me, boredom is the mother of creativity. And also curiosity.” He pauses, then adds, “You can add jealousy to that too. If I go to a show and it doesn’t make me jealous or make me think ‘I wish I’d done that!’, then it’s not a good show.”

Arad is very good at finding ways to cure his boredom. Spanning architecture, industrial design and art, his oeuvre is equally celebrated in all those disciplines. And he doesn’t think we need to contemplate the boundaries between disciplines too hard.

“Look, we know the difference between a piece of art and a piece of design,” he says. “The destination of a design piece is to be mass produced, distributed and placed in shops. But sometimes I do something and yes, it is a chair but it’s not designed for a shop. It doesn’t negotiate anything. It’s there because that’s the way I want it. The fact that you can sit on it doesn’t make it design, rather than art, although there are a lot of common things between them.”

He continues, “You don’t have to panic; the people that are panicking usually have a narrowed view. They like to have a comfort zone where they can have some authority. I don’t want to make it easy for people like them; or for you – journalists,” he concludes with a grin.

This interview was held during the Israeli designer’s visit to Singapore to present an installation called 720° for the Singapore International Festival of the Arts (SIFA) 2016.

For the full story, pick up a copy of Cubes Indesign (issue 83) at any major newsstand. 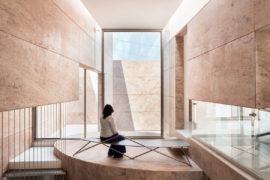