Mia Feasey of Siren Design is living proof that guts and ambition can make distant dreams a reality. Here’s how the former girl-band front-woman came to lead her own international design firm.

I won’t admit to how long it has been since I last met up with Mia Feasey, but it scarcely matters since she remains the youthful and ebullient person who launched Siren Design all those years ago. The company has grown to match its success, but it remains an inclusive group of equals, proud of its flexibility and openness to new ideas.

And the company has multiplied. Nicole Pollak set up a Melbourne studio, Penny Sloane took them offshore to Singapore, Jeanne Chan, having performed with Feasey in an all-girl band (à la The Spice Girls, but “of Asian appearance”) in London during the 1990s, has recently joined the company as chief operating officer along with Tamara Sheeran as practice manager.

Feasey had made a number of false starts in terms of professional training in Britain – “I have the attention span of a gnat” – when her adoptive Australian mother suggested she try a new start in Australia. This she duly did at the age of 20, taking with her the ongoing ambition to be an interior designer. Feasey finally completed an interior design course in Sydney, but quips that, of all Siren’s staff, she still has the least number of letters after her name. But that will be remedied in due course because she is now in the second year of an MBA at Harvard University, requiring annual visits to the prestigious business school.

“It always gave me the sense of knowing that I could do it because I could do what was absolutely horrifying to me.” – Mia Feasey

In Sydney, she says, “I started waitressing, didn’t really know anyone, no solid qualifications and I wanted to be a set designer – but started an interior design course.”

“I started to do some work for a builder,” she continues, “and he ended up getting me to come on board with him designing, on site, offices attached to warehouses. I was 24 and just learned by doing. I ended up in partnership with him and became a director – which I thought was pretty cool but had no idea what it meant.”

“Going back to the singing thing,” she reflects, “I think what happened was that I thought: ‘Mia, if you can stand up on stage in front of thousands of people and sing when you know you have no talent, you can do anything. It always gave me the sense of knowing that I could do it because I could do what was absolutely horrifying to me. 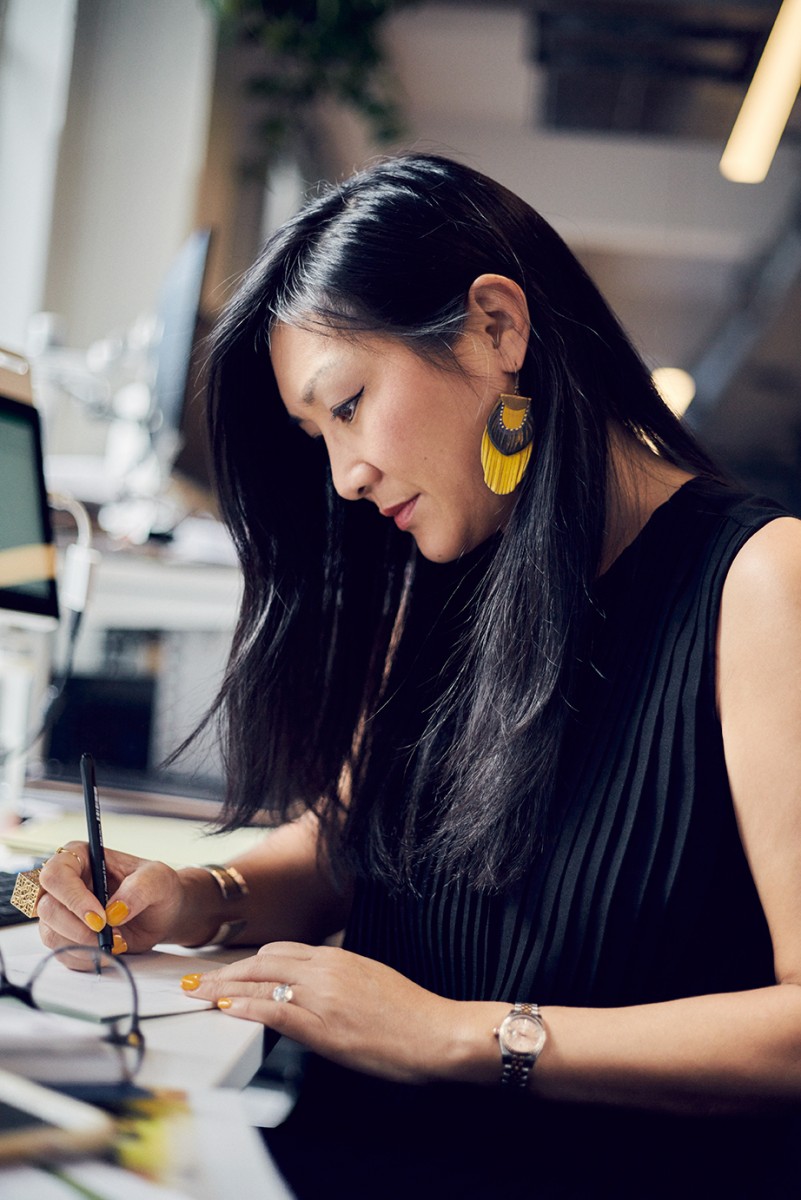 Mia Feasey built Siren Design to reflect a fresh and agile approach – both in workplace culture and design approach. Photo by Charles Dennington.

“It was a combination of all the different jobs I had as a teenager and in my 20s. Then I had to start cold-calling to win work. I had to get to know everyone. I’ve had mentors along the way. I had a fear of failure. But I had nothing to lose in a way. When you’re that young, you don’t know anything. It’s ignorance, isn’t it?”

An international magazine recently devoted an entire issue to Siren Design, labelling them “game changers.” The term obviously resonates with Feasey: “It’s because my background is so varied and not from a traditional path – study and everything – so I think about things in a different way.”

After four years with the builder, at 27 she went out on her own. “I think I had four staff and we were very fortunate that the first job I won was Yahoo7 at Walsh Bay.” With her was Penny Sloane, the first person she had hired in the design and construct business.

The name Siren was suggested by one of her ‘mentors’. “I said don’t be ridiculous, but he said: ‘Mia, it rolls off the tongue, people will remember your name. You’re women, all girls.’ So, I did and it is the best thing I have ever done.”

“I think I had four staff and we were very fortunate that the first job I won was Yahoo7 at Walsh Bay.” – Mia Feasey

Brave, open and honest are some of the core values the company celebrates – exemplified by its Monday morning all-in conferences where everyone is encouraged to be open about all and everything. Feasey adds open communication and community to the core values. “We do workshops every year with all the studios,” she says, “we’re a family and support each other.”

Flexibility, too, is key “because if you are very rigid in your approach it is hard to give the client the flexibility they need to reach a really good end goal.”

Opportunity also is a driver – giving opportunity to young designers. They take on four interns each year, two of whom will get full-time jobs, and the company builds-in the flexibility to welcome back, often part-time, staff who have gone off to become mothers.

“I’m in the business of management,” says Feasey, reflecting on how her role has changed from the early years, “supporting my designers to be the best they can be and giving them what they need to do that.”

Is Mia Feasey of Siren Design your Luminary of the year? It’s the people’s choice. Have your say at indeawards.com and Mia could be taking home the INDE.Awards Luminary trophy for 2018. Voting closes on 6 April.

Join us at the INDE.Awards 2018 Gala as we celebrate The Luminary of the year, presented by Wilkhahn.

The article was first published in Indesign magazine, issue 72.