Jon Goulder has been a mainstay of the Australian design industry for 20 years, but it’s only now that he considers his career to be taking off. With a new gig at Snøhetta, and blossoming partnerships with the likes of Spence & Lyda and Rakumba Lighting, Goulder is establishing his own unique design language. 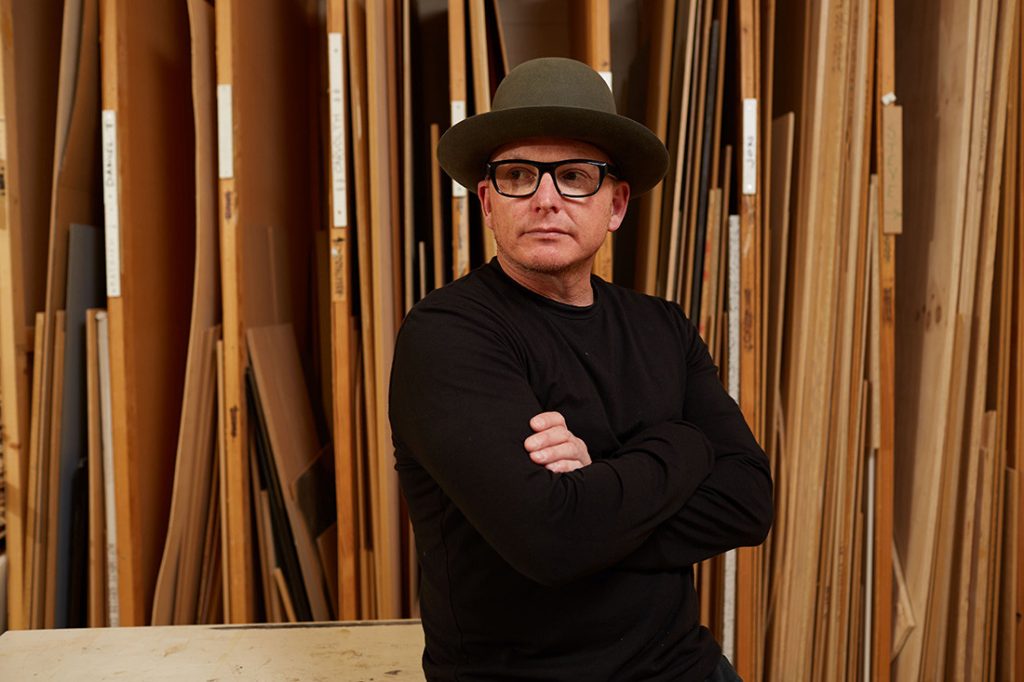 He is 47 years of age and with his track record of exhibitions, prizes and outstanding furniture (and now lighting) products, others might be tempted to take their foot off the accelerator and settle back to enjoy the high profile. But Jon Goulder is driven by the sense of continuing evolution and acquisition of knowledge. He loves the challenge.

“Furniture,” says Goulder, “is a great challenge in terms of weight, scale, structure, materials, longevity and originality. I think it has a lot to do with being a fourth generation furniture maker. I didn’t set out to be a designer. I was just a country lad from Bowral, [NSW], I didn’t actually understand what it all meant. But it became my career. It’s a never-ending evolution, a progression of thought.” Most aspiring designers don’t ever question what it means to be a designer. But Goulder had to discover it for himself. Which is probably why he only exhibited at the Milan Furniture Fair for the first time in 2017 – with the Settlers Chair (made from waterformed, hand-stitched leather on a Tasmanian blackwood frame). It proved a great success. 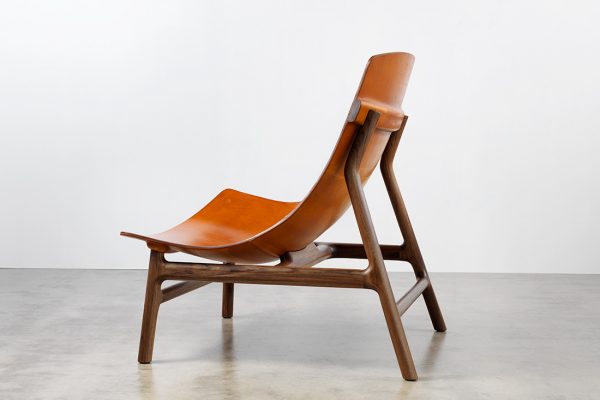 “I think there’s a maturity now in my work. It’s not coming from what I’ve seen on Instagram or online. I think there’s a certain language there. I always thought that one day I would be worthy of going [to Milan] and exhibiting internationally. Whilst all my peers had always done it, I never really thought it was worth my while or that I was worthy of that. I went in 2017 because Emma Elizabeth [of Local Design] offered me the opportunity. It was at that point that I realised that the world is actually quite a small place and that my practice could hold its own and function quite capably within an international context,” he says.

Probably, at the end of it all, Goulder will look back with T. S. Eliot’s words in mind: “We shall not cease from exploration, And the end of all our exploring, Will be to arrive where we started, And know the place for the first time.”

.
“I think there’s a maturity now in my work. It’s not coming from what I’ve seen on Instagram or online.”

This, because there is an intriguing logic to his career so far. Trained in the family business, Goulder then went to the Canberra School of Art & Design to work under the legendary George Ingham. He then set up his own consultancy before heading to Perth as head of workshop of Form’s furniture studio at its Midland Atelier where he “learned a lot about facilitating projects, running quite large commercial projects and congregating people and things to deliver projects”. This experience he then took to Adelaide where he had been invited by the Jam Factory’s Brian Parkes to re-think the furniture studio. 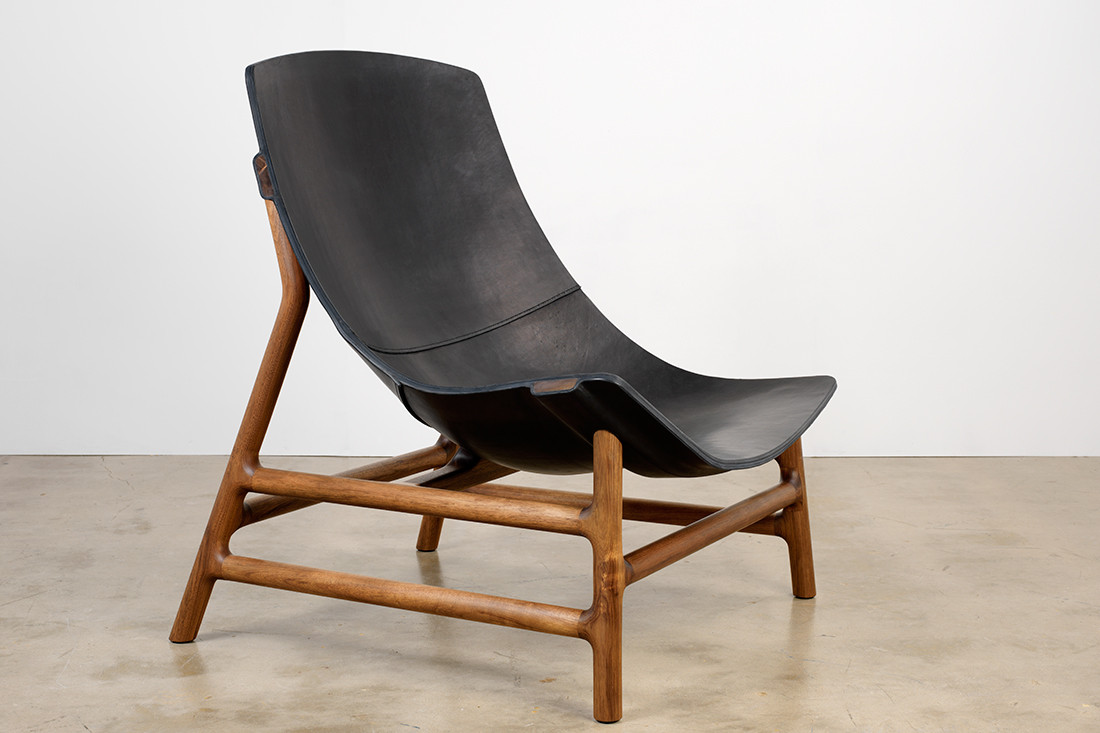 “I basically re-built the studio,” he says. “When I arrived it was built on a foundation of romantic woodwork craft. So, whilst still embracing craft I changed the studio to become more of an open house design studio. I saw myself more as a conduit, as a connector. My focus was to develop a furniture program that was relevant to the age we live in. I aimed to show the different models available to an Australian furniture designer. So, we opened our doors not only to woodworkers but also to industrial designers and others. You don’t necessarily have to have a huge amount of hand skills to develop a design practice. With the support of Brian and a Jam Factory team, I also introduced the Jam Factory Furniture Collection – the aim being to develop products available to sell to the market and, in turn, help to sustain and grow studio workshops in the not-for-profit arts and crafts sector.” 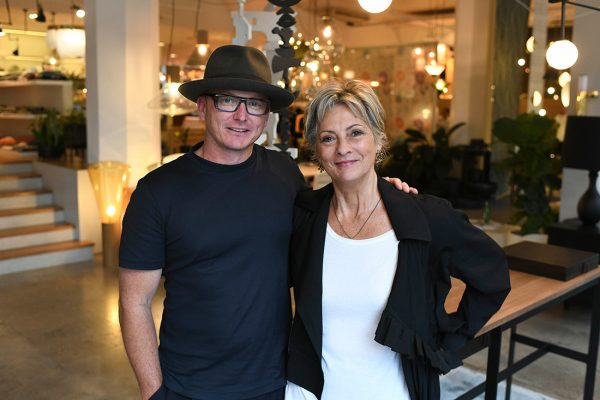 During Goulder’s four years at the Jam Factory the landscape changed as local designer–makers began to access hi-tech woodworking technology. It enabled them to produce affordable, highly crafted products. This Goulder saw as a major threat because it took away “the niche that I’d held for so long – woodworking – designing objects from wood that others could not produce here in Australia.”

“That was the driver,” he explains, “to look at other materials and how I could evolve as a craft practitioner. Forming leather – and the integration of that into my practice and into quite large-scale forms – was the answer. It started out as Maggie’s Basket [for food writer, Maggie Beer] and then it went to the Settlers Chair and now it’s the Innate Chair.” 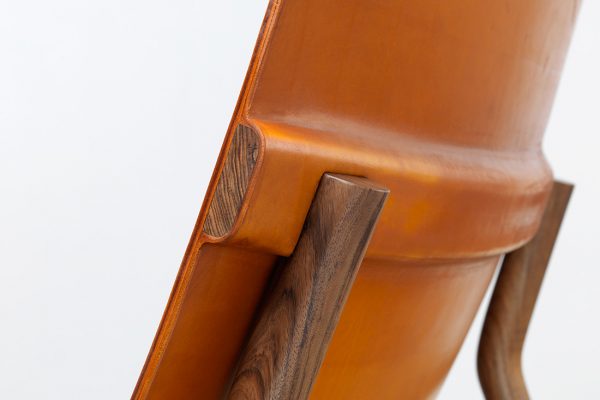 Detail of the Settlers chair

The Innate Chair is part of Goulder’s Innate Collection for Spence & Lyda. It is already into its second iteration and is the result of a hugely satisfying collaboration with Fiona Lyda. Using all-Australian materials (Tasmanian oak and blackwood ), it is a uniquely Australian product which also proved to be a big hit in Milan in 2018.

“When I look around at the [design retailer] landscape I have had opportunities to get involved with many of them, but I don’t think many of them suit my practice. I always cherished my relationship with Uta Rose at Anibou and I was looking for a similar kind of [partnership]. It is more on a personal level, more of a human collaboration,” he says. 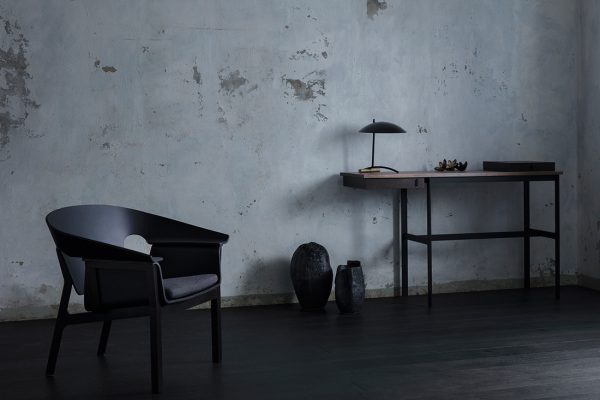 “Fiona Lyda and I found that we really enjoyed one another’s company. When I come to Sydney I like to go straight to the Spence & Lyda showroom, home base, have a coffee and enjoy that relationship.” But that is now just one half of what must surely be a perfectly balanced professional life because friend, Kaare Krokene, from the trail-blazing integrated Norwegian and international architectural practice, Snøhetta, recently invited Goulder to join the practice in its Adelaide-based Australasian arm.

.
“I think it takes 20 years to really get a language, a vocabulary and a history.”

They are “cohabiting” in the city where Goulder has an office in Snøhetta, but also his own studio in the same building. He is senior designer and maker with Snøhetta, integrating product design into projects and bringing “a cross-disciplinary skill set in-house”. He divides his week to work two or three days at Snøhetta and runs his own practice the rest of the time. With Snøhetta being an international firm, Goulder sees the potential to look at cross collaborations through its offices all around the world. 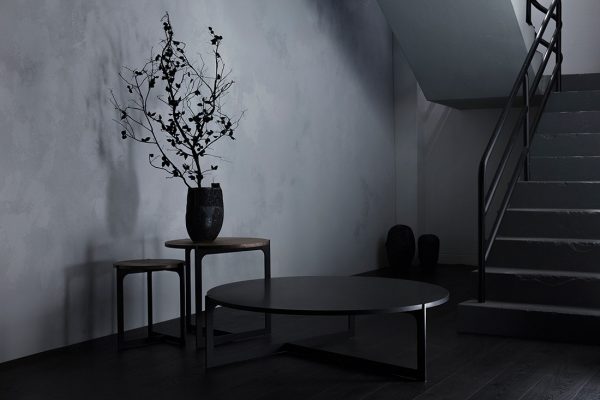 And he also sees his collaboration with Snøhetta as the beginning of a deeper understanding of his chosen vocation. “After sitting in their office you start to realise just how self-indulgent we craftspeople and product designers can be. And I’m definitely one of them. Working in an architecture firm such as Snøhetta and seeing the turn-over and time frame [on the projects that they are doing], and the community and collaboration within that design studio… it’s quite amazing and humbling for me to be part of it.”

Within the growing diversity of his design practice, Goulder gives the impression of being quietly but confidently relaxed having developed what he calls “an inherent design language”.

“I think it takes 20 years to really get a language, a vocabulary and a history. And from that, you can draw and design original work. I think it’s about maturity.”