As President of the Interior Design Confederation Singapore, George Budiman has some ambitious goals. We chat with him to find out what’s top on his agenda. As founding executive member of the Interior Design Confederation Singapore (IDCS) and having served the the Society of Interior Design Singapore prior, since 1999, before it merged with IDA eight years to form IDCS, George Budiman is no stranger to the ins and outs of the organisation. So when he was elected President last November, he knew exactly the challenges that lay ahead. That the IDCS Executive Council is made up of volunteers and the association has limited financial resources are some of the challenges he cites. There’s also the fact that each term of presidency is just two years. But this is an IDCS President that is determined to do as much – if not more – than he possibly can in a short span of time. As founder of award-winning design firm Cynosure Design with offices in Singapore, Malaysia, Indonesia, Vietnam, China, and Hong Kong, Budiman has a good 20 years of experience in the industry, a network that extends beyond Singapore’s shores, and a finger on the pulse of the interior design sectors in countries around the region. Budiman has several goals as President of IDCS, but perhaps the most ambitious of all is his desire to build an accreditation programme for Interior Designers in Singapore.

“This is very crucial, and we are working closely with the DesignSingapore Council on this,” says Budiman. “We’ve been learning from our neighbours. We’ve looked around. So far we find that the Australian and UK models are pretty close to what we require locally.”

It’s something that IDCS and the industry have been talking about for years, says Budiman, and the challenges are big, he admits. “With accreditation, designers have to go through a lot of training, and so they must see the value in it.” But it takes two hands to clap, and key to the success of this initiative lies in evangelising to the consumers. “It needs to be market driven,” says Budiman. “And we’re not just targeting individual consumers. We are targeting big firms, the largest consumers of interior design services. It will take time, but we shouldn’t give up just because it’s going to be a long journey.”

Other goals that Budiman has set forth in his term as President include strengthening the membership of IDCS by a ‘significant margin’, and to promote local talent. “Eight years ago we didn’t feel the rise of Asia’s largest city – China. But it really does affect us today. In Singapore, we now have more than 50 new competitors in the industry coming from Guangzhou, Beijing, Shanghai, and Shenzhen. Some of our prominent real estate clients are employing them.

“To become a liveable city, you attract a lot of expatriates,” he continues. “Big overseas architecture firms that come to Singapore are keen to do both architecture and interior design. So we are facing fierce competition. Local clients have more choices. They say, ‘Do we go to the local talent, or for a similar amount we try out a foreign talent? I don’t mind to try something different’.” Budiman also says the association wants to create more awareness of the work that they do. “We are no longer a ‘pretty kitten’ hidden in a cage. We used to be that sometimes. It’s about time for us to come out and tell people, ‘We can help you’.”

But that’s not all. Budiman says he plans to launch an initiative to bring “new blood into the council”.

“I always tell my council we need to invite young and emerging talent into our association. They have new and fresh ideas.” With just two years and so much on the agenda, how is Budiman going to cover it all?

“When I took up the Presidency, I went about putting different council members in charge of different programmes. I try to run the association like a big corporation, but with a non-profit organisation spirit. I’m not a micro-manager. All my Executive Council Members have the freedom to activate their own resources to do what they them deem fit to the programme.

“I do things very quickly. Sometimes when we organise an event, we take less than 60 days, or even just 40 days. Execution is very important, and I’m glad I have very good team support.” 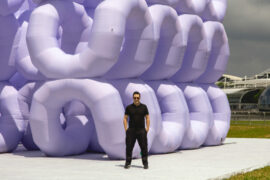 In Singapore for his latest installation, Remember Your Dreams, architect-turned-artist Cyril Lancelin talks about how public art can inspire creativity and convey meaningful messages. 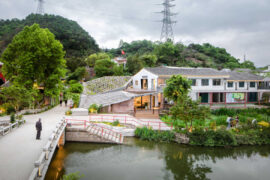 SpActrum has conceived a “brutal” reaction to a tidy tourist village in Shangen Village, China. 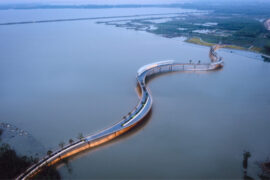 This ribbon-like infrastructure is more than just a pedestrian bridge

Integrating considerations for connectivity, biodiversity, culture and ecology, the Yuandang Pedestrian Bridge elevates the function of the bridge to a hybrid public destination fit for leisure and relaxation.