Seoul-based creative agency Urbantainer is one of Korea’s go-to companies for container architecture and experience design. We find out how shipping containers can be used to promote emotional experiences.

“Urbantainer is a compound word that combines ‘urban’, ‘container’ and ‘entertainer’. It represents our philosophy of bringing joy to people through what we do,” explains Jiwon Baik, co-founder (with Younjin Jeong) of the Seoul-based creative agency. The clarity of Urbantainer’s vision is reflected in its strategy of ‘space branding’. Baik explains: “Space branding is a design method that creates value in space by giving shape to an abstract brand concept through multi-sensorial experiences that stimulate users emotionally.”

Container architecture is one of the key elements that enable space branding, as the ubiquitous but unusual nature of modular containers provides an interesting medium for the communication of a brand’s image. The creative origin of Urbantainer (in 2009) can be traced to Asia’s pioneering example of container architecture, Platoon Kunsthalle – a container art hall for the subculture scene in Seoul. Baik explains that the Kunsthalle successfully demonstrated the design potential of containers in Korea and catalysed the spread of the typology. Since then, Urbantainer has built up a prolific portfolio that includes several landmark container architecture projects. 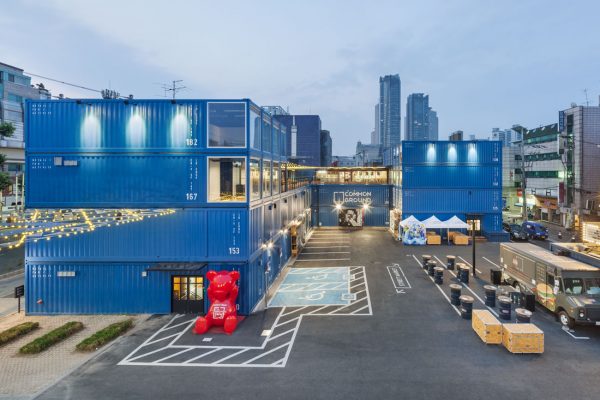 Common Ground (2015), a cultural and retail complex built from 200 containers on a 5,300-square-metre site, was South Korea’s first – and the world’s largest – container shopping mall. Being critical of the concept of shopping as consumption, the architects sought to redefine the conventions of retail platforms by reinterpreting the role of culture and focusing on connecting people for the sake of creating meaningful value for all the stakeholders.

The architects are testing this concept on an even larger scale with an upcoming project in Miami, USA. The Mana Container Park is a 7,100-square-metre site with a similar urban situation. It will further challenge the scalability of container architecture. 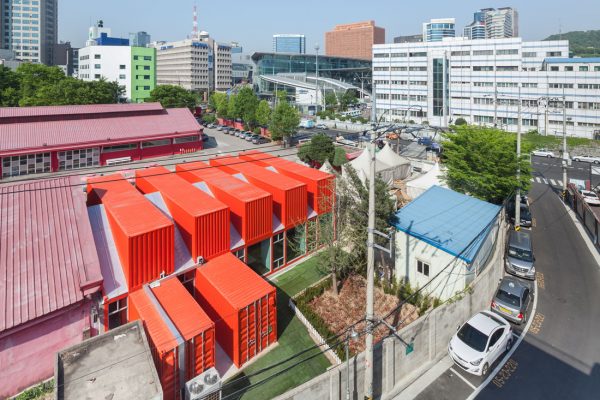 Container architecture is equally effective when adapting to contextually sensitive situations, as one can observe in the National Theatre Company of Korea’s (NTCK’s) social space extension. There, shipping containers are stacked in a staggered pattern to create voids that keep the design visually light and complement its context. The modular nature and structural stability of containers allowed the architects to create a 12-metre-long column-free space where large groups of people can gain a closer experience of the world of theatre.

Read the full story in Cubes issue 89, on sale now!