Jamie Myrold, Adobe’s Vice President of Design, shares her observation on design ethics and the role they play in the creative workflow changed by AI and machine learning.

“Identify potential bad actors and how they might use your product for nefarious purposes.”

That was one in many prompts printed in Adobe’s design ethics cards – a delightfully illustrated tool of exercise to create awareness of and discourse centred in ethics.

Introduced last year at Adobe Design Summit, the cards are an internal toolkit of Adobe’s design team (and beyond) conceptualised by the software company’s Vice President of Design Jamie Myrold and Chief Privacy Office Alisa Bergman.

Myrold was in Singapore in March to talk about ethics and the future of design in the age of AI at Fortune’s Brainstorm Design conference during the Singapore Design Week 2019. 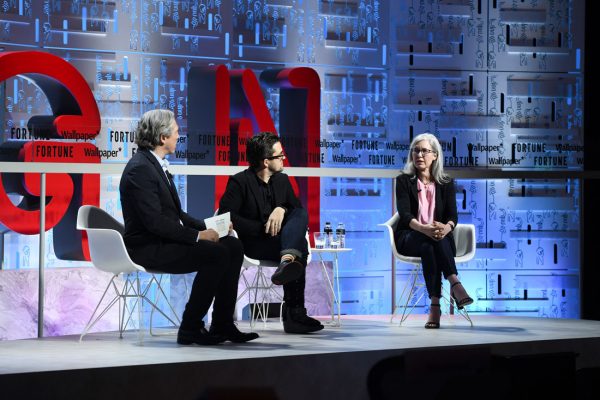 “The idea is that every time you’re starting a new project or forming a new team, you can use these prompts to create a consciousness about what we as designers are creating and putting out into the world,” she shared during her session with Design for Good author John Cary with Fortune’s Clay Chandler moderating. 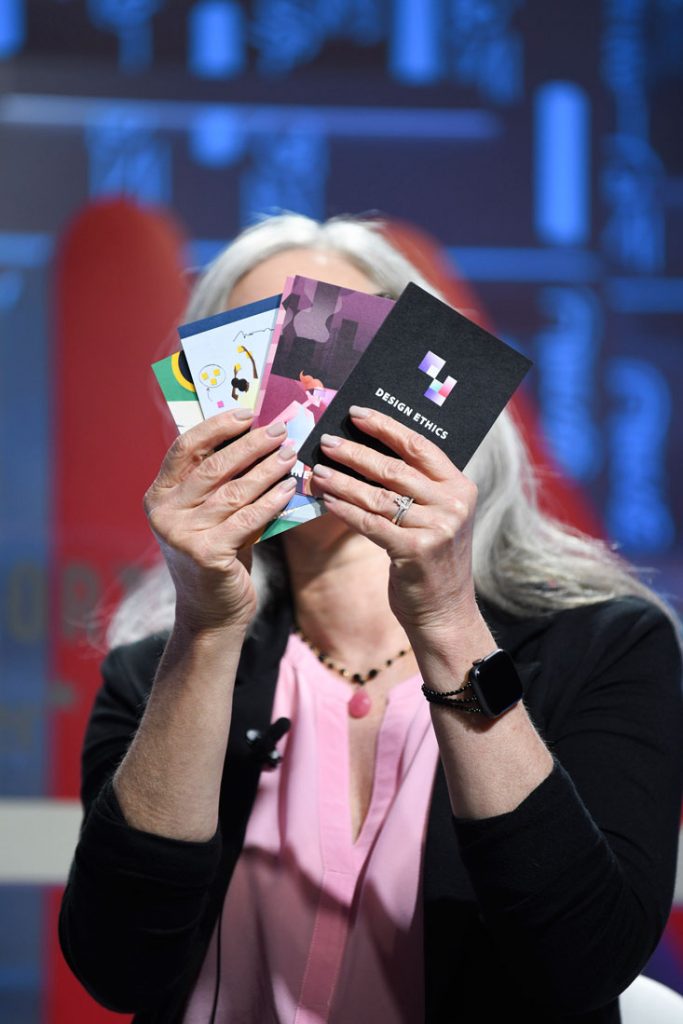 Examples of that particular prompt were photo, video and audio manipulation software being used to spread misinformation that alters perception and behaviour; and unscrupulous marketers that may identify and target people with gambling addiction and relapse propensity to receive casino discounts and offerings.

Myrold joined the company over 15 years ago and has spearheaded Adobe’s transformation to a leading cloud-based creative software provider. She leads a global team of 300 who played a key role that goes beyond redefining Adobe’s business.

Myrold and the global design team.

Should designers have standardised design ethics? To what extent should they police themselves? Who should be the arbitrator? Who are designers to impose their moral conduct on the universe?

These questions popped up during the session and the conclusion was: it’s still totally a grassroots movement and we need to keep the conversations going, and it’s always good to broaden the roster of the speakers.

We caught up with Myrold to find out more about Adobe and ethics in the age of AI and machine learning.

So, should designers have standardised design ethics?

I think, at the highest level, ethics come from the values of the company itself. One of our core values at Adobe is to be genuine. That filters down to help people at the workplace –  create a workplace that you want to work in and treat people the way you want to be treated – that value system trickles toward the entire company. So let’s say I am asked to do something that goes against that core value, I will say no to it.

Tell me about the origin of Adobe’s Design Ethics card.

The cards were created for our design summit last year. We have a Chief Privacy Officer [Alisa Bergman] at Adobe who is a lawyer and we discussed the best way to create awareness to approach the design work in a more ethical way. I think this is an important discourse to have, particularly now when we have AI and machine learning coming in to change designers’ workflow.

The conversation around ethics is not so new but it’s getting bolder now and I think we need ways to empower designers to understand that they have a voice in whatever they are creating. Because most designers aren’t programmed to ask questions.

AI and machine learning have been around for a while but they are now at the forefront and they are, in my opinion, changing design tools significantly.

Can you share some of the recent breakthroughs in Adobe that will change designers’ workflow?

We have a whole new canvas for designers called Adobe Dimension, which makes it easy for designers who create in 2D realm to move to 3D. The interface is similar to Illustrator and Photoshop where you can just drag your 2D creation into 3D modelling templates from Adobe Stock.

We’re also looking into design tools that are going to make it easy for designers to start engaging with 3D workflow. We’re creating an experience that makes it really easy for those who want to be creative without having to engage an engineer.

How do you think we’ll collaborate with AI in the future? Will AI technically be able to claim authorship?

We could look at it in two ways. One, where designers or artist are starting to use algorithms like a paintbrush – a tool. That’s how I think about it. I think technology is not something that’s going to take away authorship. it’s actually part of the designer’s toolkit.

Using Color Match in Premiere Pro, powered by Adobe Sensei, video creators can automatically match color between shots, such as making sure that a performer’s skin tone is consistent across frames. “Image source: Adobe blog

The other way to look at it is more around machine and designers co-creating where the designer or the human in the equation, is always going to bring the human aspect. I don’t think the algorithms are ever going to reach the point where they’re smarter than us – machines will still need to be trained by humans. The partnership will always be there, it will only get deeper.

For the workflow, I think it’s going to take away the mundane task, freeing up designers to be more creative.