The winner of the Seidler Textures Rug Award 2008 is announced in Sydney.

The Awards night was fittingly held at the fantastic penthouse of Seidler Apartments in Glen St Milsons Point on 19 November.

The winning entry was from John Taylor of Stockland for The Waterfront Apartments in Kingston ACT – a project using four rugs reflecting the strong architectural form of four atriums. Colours were chosen to echo the distinct change in Canberra’s seasons from autumnal reds to the greens of spring. 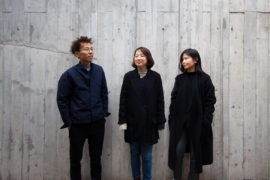