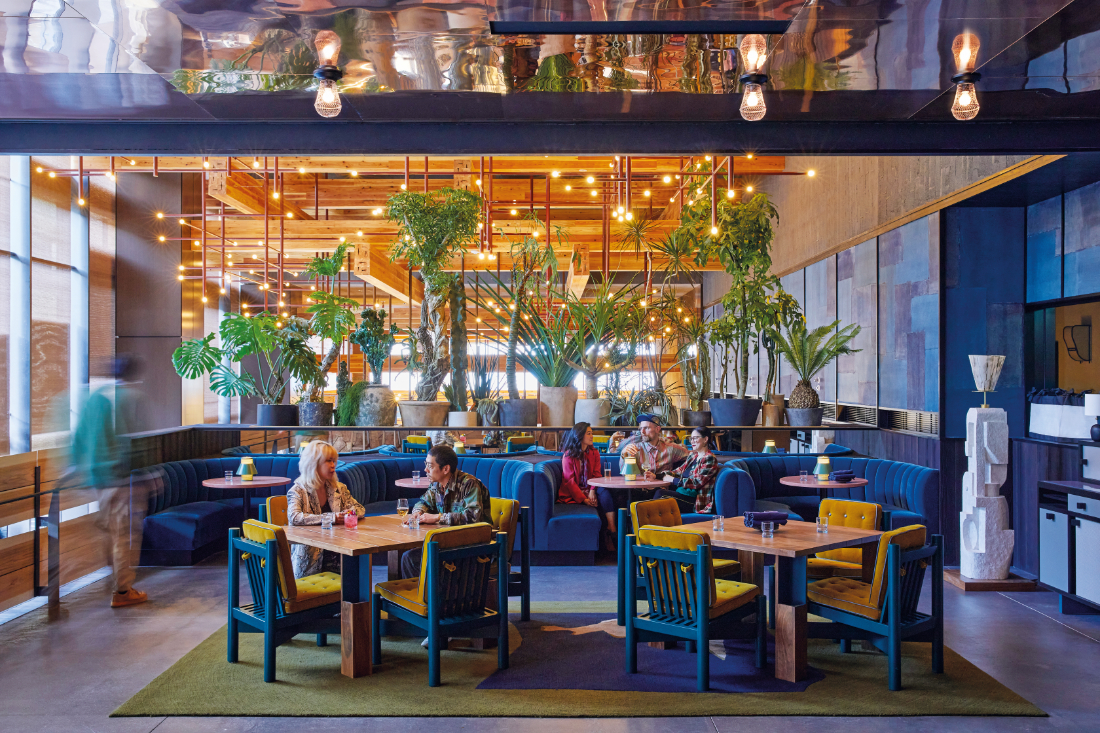 Establishments like Popioko Bar and taco lounge in Ace Hotel Tokyo are important for setting the tone in the hotel's forward-thinking approach to hospitality. Photo by Yoshihiro Makino.

“In the past, boundaries regarding travel were very clearly defined: business or leisure, luxury or budget? The lines are blurred today. Travellers today are savvy when it comes to information, they want authentic experiences, they are environmentally conscious, they know what is current and want to be seen in the right places, they want to do some work in the hotel but not in their rooms, they want to be part of a tribe that understands their needs,” says Chris Lee, founder of design studio Asylum, summarising the increasingly complex world of hospitality.

The rising middle class, accessible air travel and technological advances have all been key drivers of the changing hospitality landscape. Industry disruptors like AirBnB and the proliferation of social media have kept travellers’ expectations high. Where there were mostly either luxury five-star hotels or lodgings of the motel variety in the past, a plethora of new options and brands have been rolled out to cater to the diversified traveller demographic. 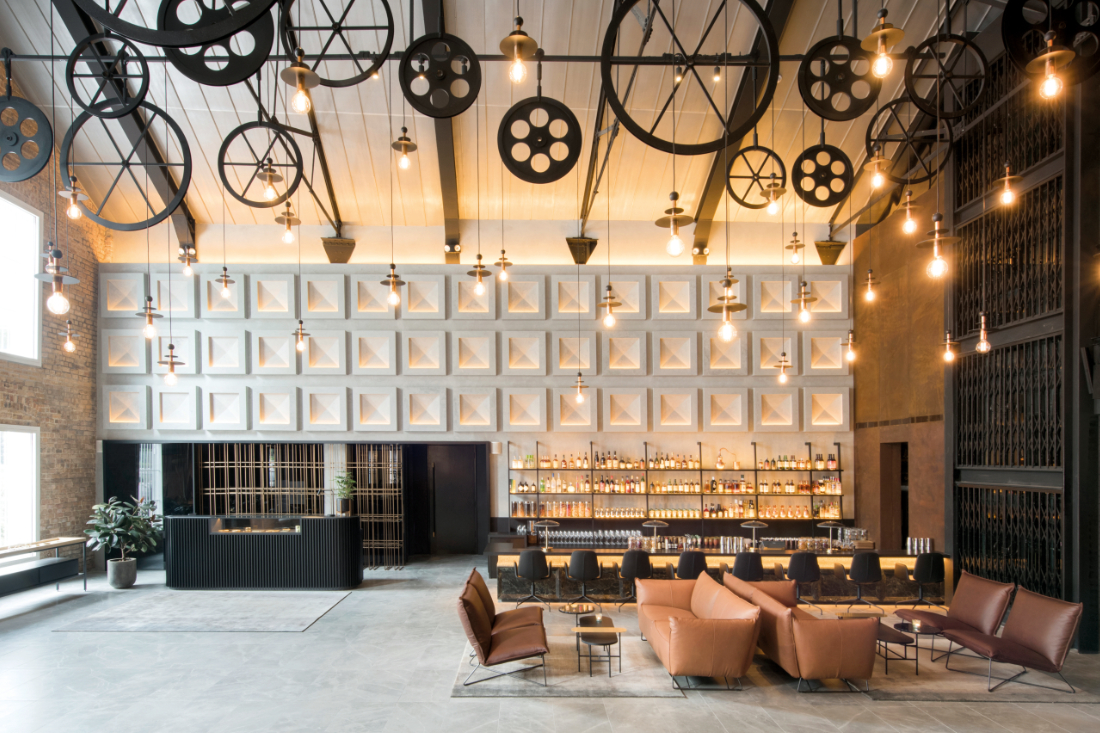 The Warehouse Hotel leverages its industrial past in its design while its lobby is activated as a social and event space. Photo courtesy of Asylum.

“As we transcend from one period of mass growth and accessibility to a period of caution and restriction, experiences will probably be the most valued element of all – and that which will set properties apart.”

Nigel Harris, managing director of hospitality design consultancy Greymatters, suggests that the sudden surge in hotel offerings comes at an expense. “The overbuild we see today is the result of a relentless pursuit of more rooms and brand distribution in most corners of Asia Pacific. Designers have responded to this but equally, many investors have compromised ‘good practice’, resulting in properties which are now less relevant and unlikely to survive today’s particular pressures.”

The COVID-19 pandemic throws another spanner in the works. It has been devastating for the tourism and hospitality industry. Social distancing and heightened hygiene measures, though disruptive, are short-term inconveniences. The more important question to ask is how can and should the industry evolve what it offers?

“As we transcend from one period of mass growth and accessibility to a period of caution and restriction, experiences will probably be the most valued element of all – and that which will set properties apart,” says Harris. In this respect, small-to-medium scale hotels designed to celebrate local culture and community offer clues to the way forward. 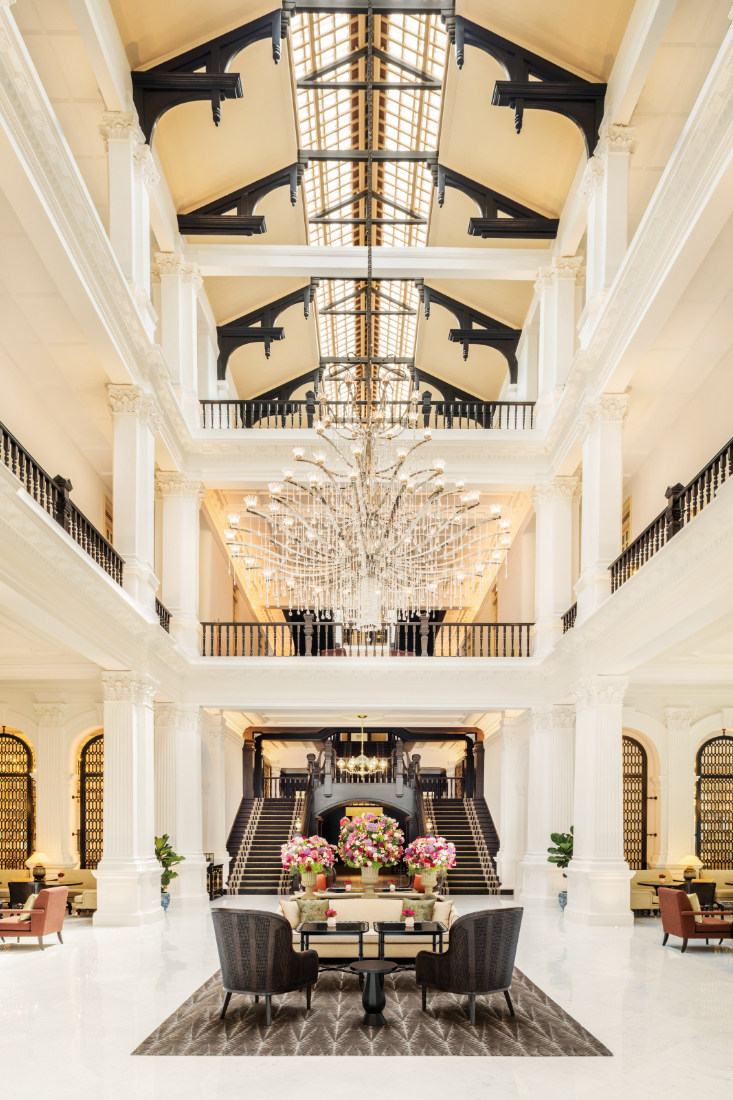 The refreshed lobby of Raffles Hotel Singapore by Champalimaud Design is at once grand and familiar, with intimate nooks for gathering and conversation tucked to the sides. Photo courtesy of Raffles Hotel.

Take for example The Warehouse Hotel designed by Asylum. Housed in a trio of meticulously restored godowns by the Singapore River, its design reflects the compelling and charming local narrative the hotel offers its guests. Spaces beyond the room feed the desire for community and engagement. For example, the homely hotel lobby has been designed for gathering and interaction instead of administration, with just a discreet concierge counter serving guests. “Many hotel lobbies have been activated as social and event spaces so that it is always seen to be buzzing; many travellers do not mind smaller rooms if they have ample social spaces to hang out or do their work,” says Lee.

Subtle nuances are just as important as obvious gestures in affecting a guest’s experience — something the iconic Raffles Hotel considered in its recent refurbishment. “More than ever, great hotels are important parts of their neighbourhoods, and a reflection of them,” says Ed Bakos, CEO of Champalimaud Design that headed the renovations. Charming original touches that “felt very Raffles” such as guestroom doorbells were kept but the Grand Lobby’s role as an activated social space is enhanced with bevelled crystal glass screens replacing imposing iron gates to encourage discovery.

Loh Lik Peng, founder of hotel developer Unlisted Collections, is no stranger to the idea of creating memorable experiences. Its acclaimed properties such as the former New Majestic Hotel in Singapore designed by Ministry of Design and The Waterhouse at South Bund in Shanghai designed by Neri&Hu forged the way in Asia early on in the game. “For me, The Waterhouse at South Bund was cutting edge in how it fused the old and new in a very effective and dramatic way. I think we were able to capture that moment in time, the zeitgeist in Shanghai before the huge explosion of luxury hotels,” Loh says. 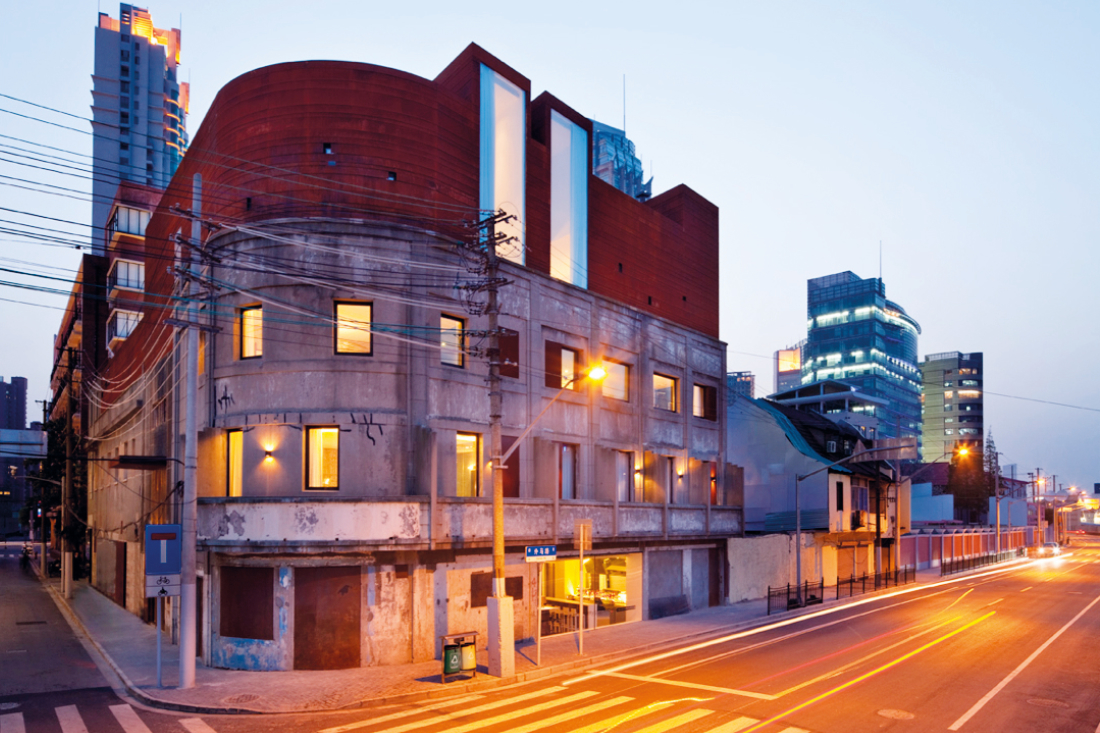 The Waterhouse of South Bund in Shanghai by Neri&Hu was very progressive in how it tied the hotel experience to the city very closely. Ten years on, it remains relevant and still offers lessons to be learnt. Photo courtesy of Unlisted Collection.

Related: What will designers bring to the table for the future of hospitality?

When it comes to elevating guest experiences in rooms, Loh shares that it’s not just about bringing in nice furniture but about harnessing technology – even more so given the pandemic. “More and more, it’s about how we integrate technology into guest services to make the experience more holistic – ultra fast Wi-Fi, more personalisation of services, etc,” Loh shares.

Certainly, the pandemic will influence how hotels are operated and subsequently how they are designed. Contactless digitalisation, such as voice-activated lifts and facial recognition check-ins, will also be increasingly employed. “These kinds of technology will likely outlive the immediate needs of the COVID-19 situation because they are generally useful technologies,” says Loh.

It means designers will have to work harder at crafting richer, emotional spaces to balance out an increasingly digitalised service experience. In Bali, the new Titik Dua demonstrates a hotel’s potential to inspire and educate through its architecture. Designed by Indonesian architect Andra Matin, guests traverse a 45-metre-long bridge built over an existing art gallery upfront as part of the arrival sequence. This ingenious formal response to what was originally an obstacle symbolises the hotel’s intent to integrate the city’s local creative circle though exhibitions and workshops. “Hotels have been expanding in their capacity to be hubs where local creativity and cultural production can thrive. With that in mind, more public facilities have been considered and provided more than ever,” says Matin. 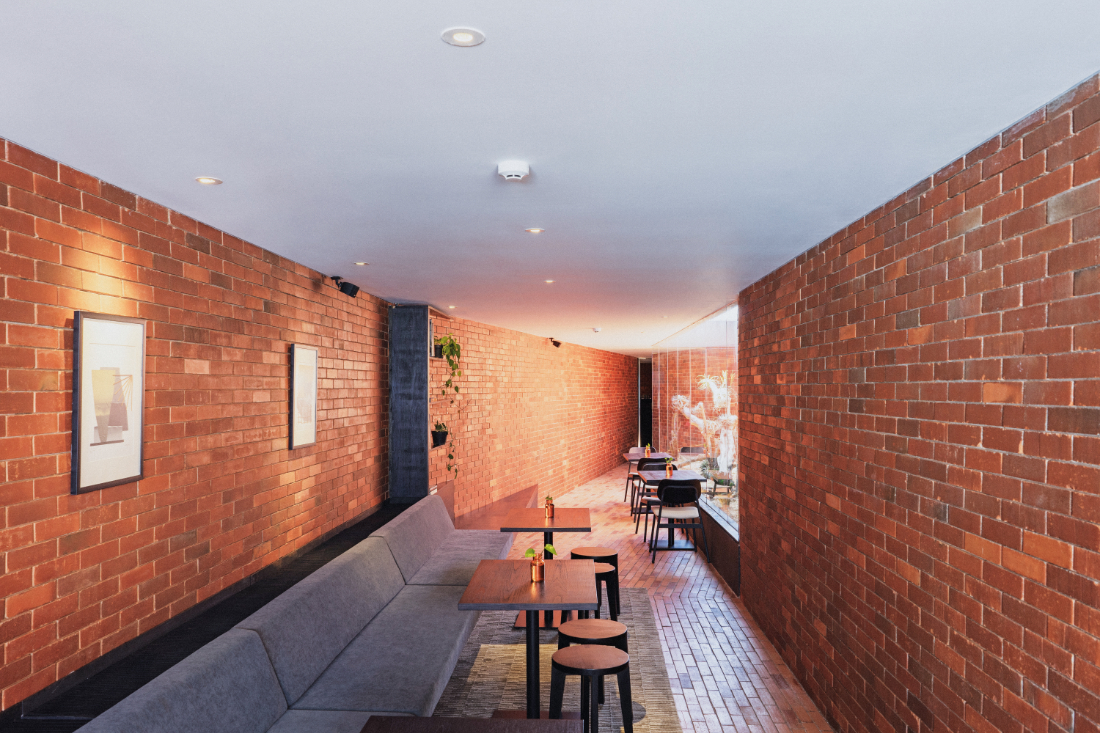 Indonesian architect Andra Matin designed a bridge that links the street to Titik Dua hotel. The hotel is set back from the main thoroughfare and the bridge is symbolic of the hotel’s desires to integrate the area’s creative scene in the programme of the hotel. Photo by Putu Adi Widiantara.

“20 years on, people still want to feel delighted, surprised and exceptionally cared for when they travel. The digital economy means that people have more choices about where they want to be, so it’s important for us to connect with them in human ways, to foster loyal, long-lasting relationships.” 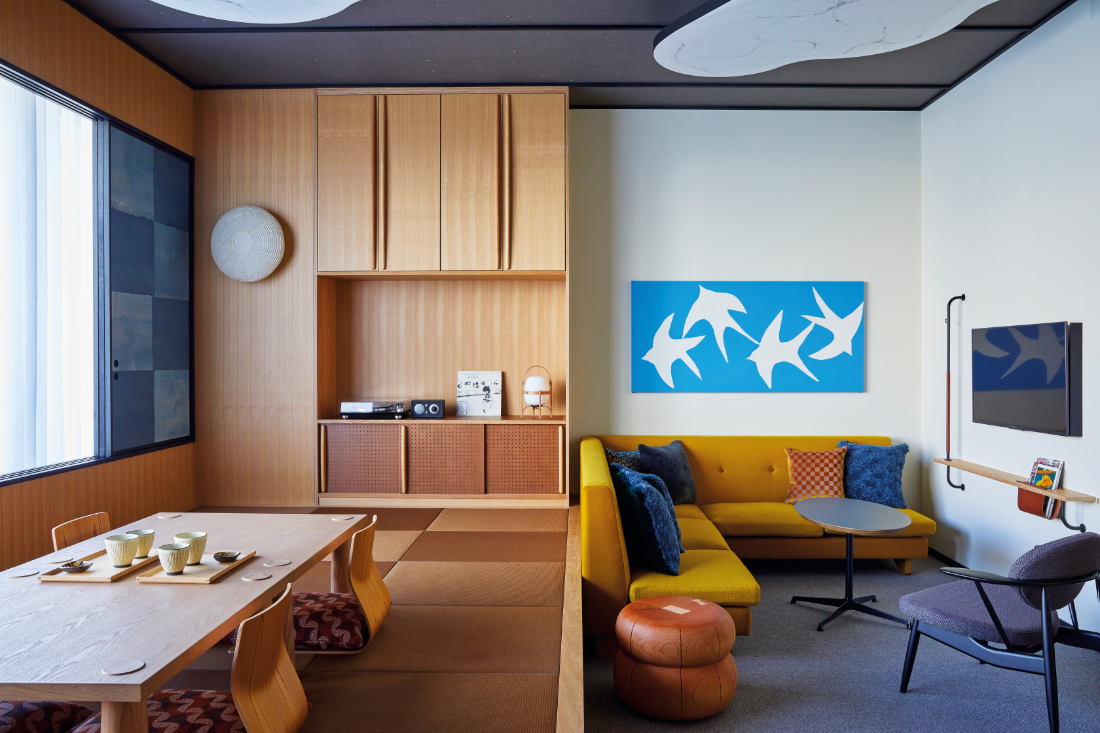 Rooms such as the Tatami Suite at the Ace Hotel Kyoto put a modern spin on traditional Japanese elements, many of which were created in collaboration with well-known Japanese creatives. Photo by Yochihiro Makino.

For 20 years, Ace Hotel has been championing the contextually and socially focused hotel model most stylishly, and with great consideration for a city’s culture. The tradition continues with Ace Hotel Kyoto, the brand’s latest offering and also its first hotel in Asia. US-based Commune Design collaborated with over 50 western and eastern artists for the interior of the building that melds the historic Kyoto Central Telephone Office designed by Japanese modernist architect Tetsuro Yoshida in 1926 with a nuanced Kengo Kuma-designed extension. A dedicated gallery aligns with to Kyoto’s rich creative heritage, while a vibrant lobby, garden courtyard and flexible event spaces all speak to the modern traveller’s quest for social experiences unique to a city. Rooms feature tatami-lined bedside tables and vintage-tinged textiles by Akira Minagawa, and noren curtains, banners and room artwork by celebrated nonagenarian artist Samiro Yunoki, among others. It all feeds into the hotel’s role as a cultural ambassador.

“When we’re designing new projects, it’s as essential for us to work with architects and designers who exemplify all the best qualities of those cities as it is for us to work with artists, musicians and cultural curators who know their cities best,” explains Kelly Sawdon, partner & chief brand officer at Ace Hotel Group.

“20 years on, people still want to feel delighted, surprised and exceptionally cared for when they travel. The digital economy means that people have more choices about where they want to be, so it’s important for us to connect with them in human ways, to foster loyal, long-lasting relationships,” says Sawdon. In the end, the best hotels build experiences based on honest dialogue and a genuine focus on guests – just like a good host.

Related: The need to engage with sustainability in hotel design